SLC: I love to paint and decorate! 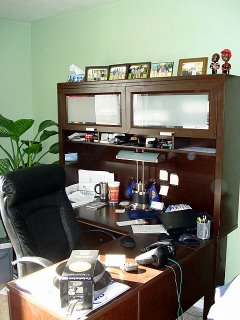 Since my last visit in October, Jeff has painted his office a sage green. 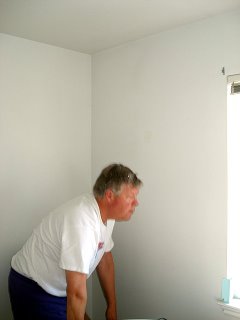 He promised I could decorate the guest room, while reserving veto rights.

The boys skied two days, and then on December 28th we got cracking on doing the guest room.

I'd been thinking about what I wanted since October.
Something masculine, something that said ski, outdoors, fresh, and wintery.

I flipped through the IKEA catalog (IKEA will come to SLC in March) and fell in love with the robin egg blue and brown combo.

I also picked out a bed frame. Too expensive to ship, we'll buy it in SLC later. 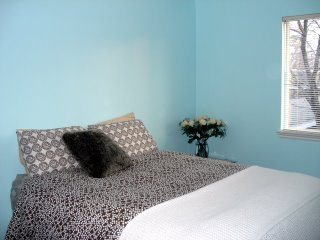 There. Isn't that much better?

The duvet cover set is Amelia Rund, I think.

The white roses are from Bernie. They lasted the whole week we were there, and looked so lovely each morning when I awoke.

The bed frame will be this.

And I have rectangular corduroy brown pillow and white tab top curtains to get from IKEA too.

If IKEA was publicly traded, I'd buy stock. The large sized families in SLC are just going to go crazy for IKEA's family friendly and low cost products. If you ever have a chance to visit an IKEA, do so, and get a Swedish lunch there too. YUM! 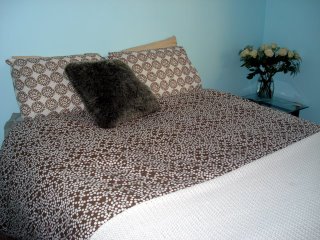 A closer shot of the bedding. 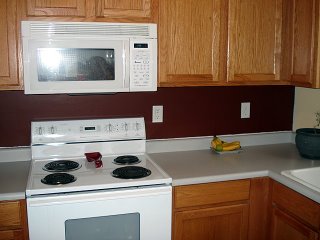 Jeff had re-thought his kitchen back splash color.

We had painted it high gloss last October, a reddish brick color.

The high gloss showed every wall flaw, plus drips and runs. Yuck.

He discovered picking a perfect color actually takes more than three minutes. This time he went with a warm mahogany color. Much better. 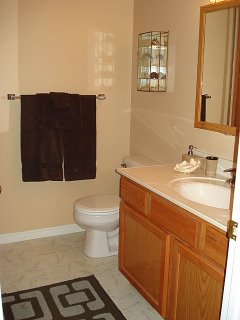 The guest bath got painted in the deeper apricot sandy beige that he had painted one wall in his bedroom. Jeff and I cranked that out on New Years Day in about an hour.

Add dark brown towels, brass and glass display case full of sea shells, and ta-da! A guest bath that is actually rather elegant.

Sure beat the fog grey.

New Year's Eve was fun. There was Mexican food and bowl games. Jeff went out with some friends, Bernie and I watched "The Lady in the Water"
(or was it "The Girl in the Water? Anyway, it was good.)

We "celebrated" New Years on Texas time, and hit the sack before the Midnight arrival SLC time.

I was still awake when I heard fireworks going off.

I peeked out our second story window and watched a twenty minute fireworks display going off very close to us. Now that's sweet! 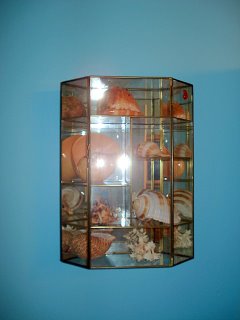 Before we got there, Jeff had painted his master bath.

After painting the living room, kitchen, his bedroom and office, he was feeling bold.

(Scared me the first time I looked in. Ohmygosh!)

But he "is getting used to it, kinda of likes it, wakes him up, it was a bear to mask everything in the bathroom, I really don't want to repaint..."

More of my brother's shell collection that Jeff has inherited.

All that is left now is the down stair's powder room, which will get painted the same color as the living room.

And hallways.
I'm game.
I love to paint!
Posted by Thoughts on Life and Millinery. at 11:55 AM

Amazing! And the pictures are grand! You should write a book.....Memoirs of Lady Jill. Hugs! Welcome home!