Last August Bernie and I walked out of house in Kingwood with two dufflebags, two cats in carriers, and two backpacks.

It was a breeze. I hardly blinked as we climbed into the awaiting taxi and drove away to the airport.

Monday night we walked back into the house...and I cried. Our left behind house was still as it was when we left it; it was beautiful, bright and in perfect order. The lamps shone like life and joy, and I felt like I had returned to the best moment of life.

I didn't forget the reasons why we had left to move to Utah. I don't regret our decision, but for a few hours we sat in front of the fire and talked of the times we had had in this house. Good times and very very hard times. Sickness and health, rich and poor, better and worse...doesn't the house that becomes a home become the stage and setting of a marriage?

Tuesday morning the movers arrived and began to empty the closets and cupboards. It is estimated that there will be close to 200 boxes loaded into a van tomorrow. Frankly, I recoiled as I shot pictures of what was in each drawer and cupboard, in a desperate ploy to jog my memory of where "things" had been stored in the "old" house.

It has been almost four months since I reached into any of those spaces. For four months I have lived just fine with just what we brought with us, a borrowed bed and a couple of chairs, a couch and three bags of "stuff" from the grocery store and IKEA.

What on earth am I going to do with 200 boxes of stuff that obviously I don't really need?

Our household goods will go into storage in Utah for a minimum of two more months. We have an idea of which house we will be buying, but are awaiting some more information before we mentally designate that place as "our new home".

Two hundred boxes...and furniture too...there simply is no room for all of this regardless of where we move.

Bernie's company is paying for the moving costs; it doesn't matter how much we bring. I stoically watched the packer carefully put an empty cardboard Starbuck coffee box in with some other kitchen item; I didn't even reach to toss it out. I will have to get a dumpster anyway in Utah and hold garage sales, put furniture up for sale on Craigslist, or on consignment, or simply leave it at the curb on heavy trash day.

I know that it is common and normal to simplify as we age. But the task of making the decisions of what goes, and how it goes seems overwhelming to me right now. I know I will have to make some sort of sense of all of our belongings and work hard to nestle them nicely into our next nest, to make a fit stage and setting of the next chapter of our lives.

And all the while that I am doing that I will know that likely we will uproot it all again in another ten years or so when we retire, or grow too old to manage on our own.

I remember all the strange and empty houses I have seen lately, and am so thankful that as our possessions are driven away, another couple, close to our age will fill it with their belongings. We met the new owners and the new "lady of the house" at signing yesterday; Ellen told me how beautiful she thought the house was, and how all her friends thought so too. She has just lost her father; her mother will be moving in with them now. How quickly even her plans had changed for her move.

As I write this on a clickity library keyboard I really just want to curl up and hibernate, and awake with everything settled again somewhere, somehow. I know that won't happen. We drive errands through Kingwood and it seems dreamlike that I am once again in Texas for just a brief moment, and will likely never be here again in my life time. Christmas decorations are up, and carols play in the stores just like they did last year, and will again next year.

A bit like the old play "Brigadoon". It seems a bit like a dream. I just hope when I awake it will all make pleasant sense somehow.
But for now, it is just most unsettling.
Posted by Thoughts on Life and Millinery. at 9:31 AM 9 comments:

Bernie and I flew to San Diego for Thanksgiving.
We got to the airport at seven in the evening on Wednesday, the busiest travel day of the year. 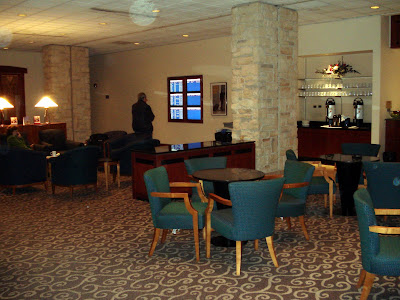 The place was practically empty. This is the flight lounge...usually jammed packed with travelers. We didn't even need to wait in line to check in.

It was very weird.

We asked various airport employees about it, and they all said that in their twenty or thirty years of work they too had never seen anything like it either. The economy just is too rough for people to fly right now I guess. 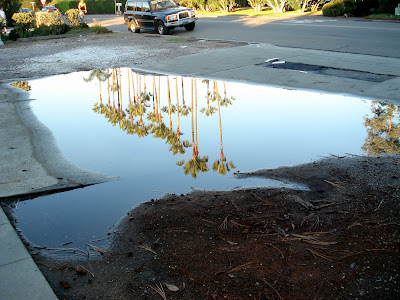 After we landed in San Diego, we headed to my parent's house in La Jolla. It was raining when we arrived late Wednesday night, and it rained quite heavily all that night.
The next day the paper reported it was the most rain that San Diego had received in a twenty four hour period in 99 years, beating the rain total that was posted in 1909. 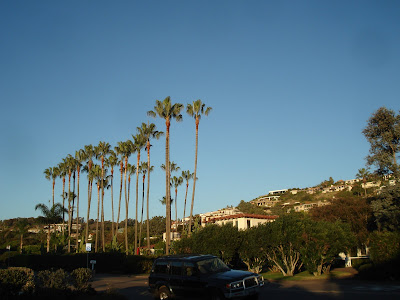 By Thanksgiving Day afternoon the skies were clear again.
(The palm trees that were reflected in the puddle above, properly viewed in the sky above.) 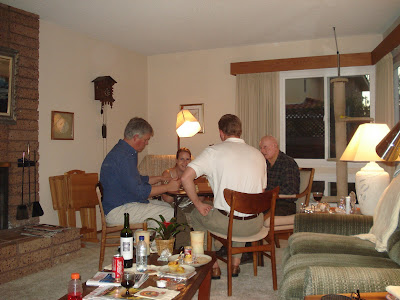 A quick game while waiting for the turkey to be done.... 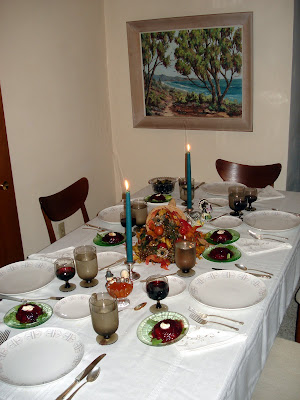 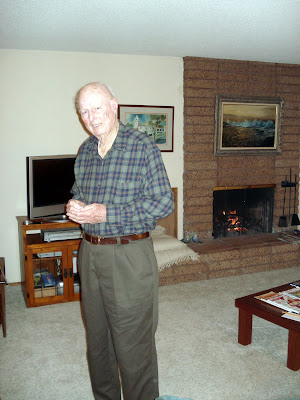 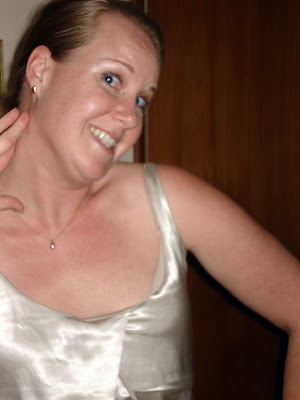 our daughter Laura....(she is living in San Diego now, and is working as a Hospice coordinator nurse.) 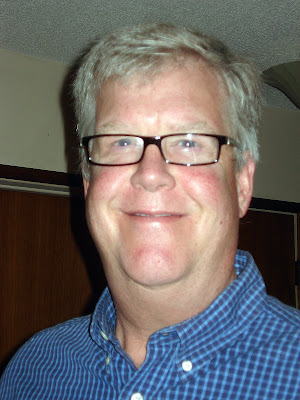 Bernie.
I didn't manage to get a good picture of my mom or me, but we were just six around the table.
Jeff was able to fly in from Salt Lake as well.
I can remember Thanksgivings with the same china on this same table, but there was eleven of us around it...grandparents, cousins and so forth.
This Thanksgiving was a precious grouping to me. 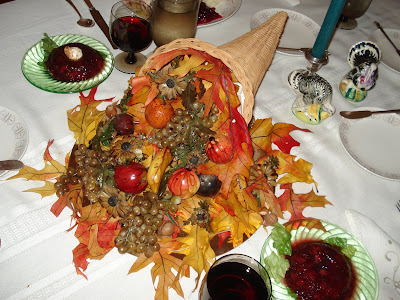 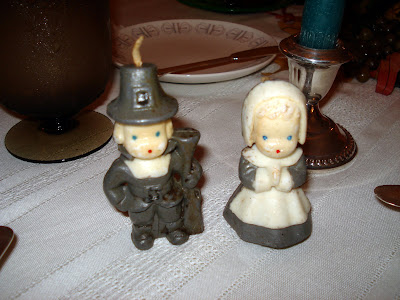 The little pilgrim candles that appear on the table each year. 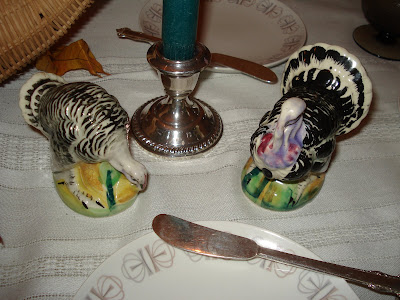 It is a running joke now: One year Jeff sat down for some holiday meal, and grabbed a ceramic table decoration, and began to shake it over his food.

As it turned out, it wasn't a salt or pepper shaker. 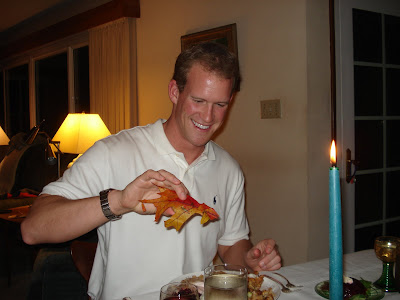 The joke is now to grab just about anything and give it a shake....it just might be this holiday's salt shaker! 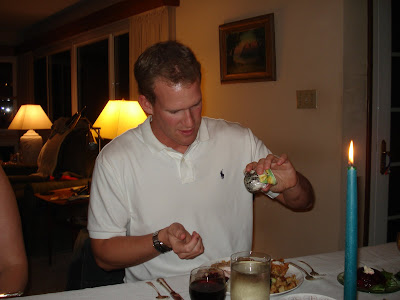 (And no, the salt doesn't EVER come out the turkey's butt....it comes out of the TOP of the turkey....Smart Alec.) 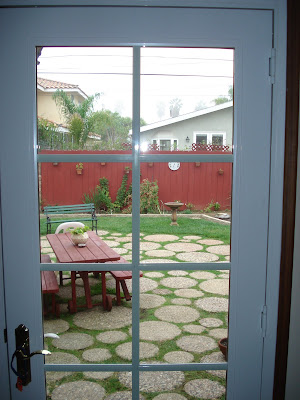 I got in a few neighborhood walks, and lots of chats with my Mom and Dad, and with Laura. We stopped by Bernie's folks as well for a catch up there too.
Visits home always go so fast.
We were back in Salt Lake on Sunday.
Today we fly again, this time to Houston to sign over our house there, and oversee the loading of our household.
We'll be back in Salt Lake again on Friday.
I'll post if I have a chance...
Otherwise, we'll catch up again next weekend.
Posted by Thoughts on Life and Millinery. at 7:52 PM 6 comments: