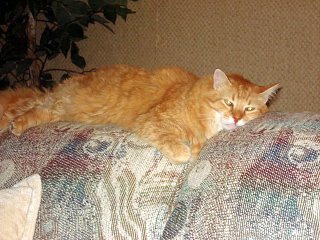 Did you get enough turkey, Tiggie?

What do want to do now? Would you like to look at home movies, or play games or something?

You're thinking of taking a little nap.

I hear turkey is high in tryptophane, and that tends to make one sort of sleepy. 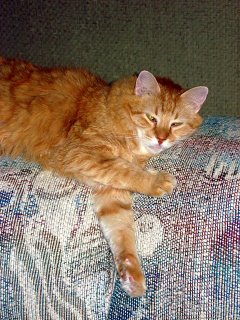 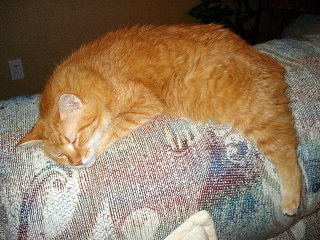 I think he's already asleep.
Posted by Thoughts on Life and Millinery. at 12:29 PM 1 comment: 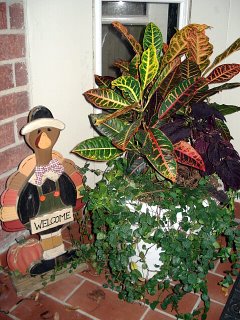 The real down side of living half a continent away from your family is making choices about holiday celebration travel.

Some years family comes here, some times we go there, sometimes we do neither, in light of future travel plans.

This year it is just us two, Bernie and me, and of course the two ridiculous boy cats.

If some one was to drop by, they would be welcome. Out by the front door we (OK, I) have placed a wooden turkey, dressed in rather odd attire, holding a sign confirming our welcoming attitude.

I imagine turkeys would have flooded to our doorstep, looking for amnesty, had they only known how to read. 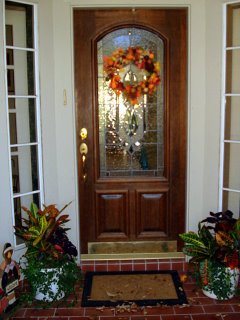 And as much as I think wreaths on leaded glass doors look a tad odd, nevertheless a wreath adorned with a bountiful array of artificial food stuffs, such as nuts and gourds, hangs proclaiming the time of harvest. 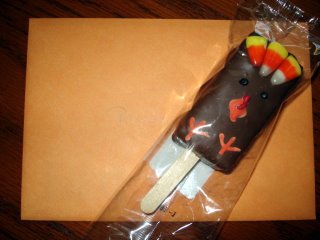 My beloved husband is helping out with the cooking. I treated him to a Turkey Rice Crispy pop and a card with his morning cup of coffee.

Some day I think it would be fun to make those for grandchildren.

For now, I am thankful for the family I have, and the land that I live in.

May we all remember all that we have to be thankful for, and that we speak our thanks through out our meal, and then discover, as we lift the last forkful, that there is yet more thanks to be given.
Posted by Thoughts on Life and Millinery. at 9:22 AM No comments: 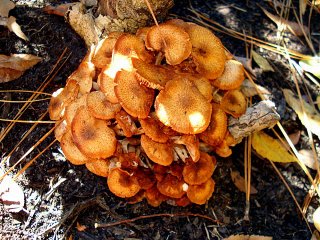 Last week the dead holly bush in front of my office window spouted mushrooms over night.
I wondered if they were eatable.

They have mushroom picking classes around here. I like mushrooms, so I'm going to someday work that class into my life.

These mushrooms only lasted 48 hours, and then they were gone.


On the side of our driveway is a 12 foot high holly bush. It got a jump on the Christmas decorating by changing into the red version of its berries over night as well. 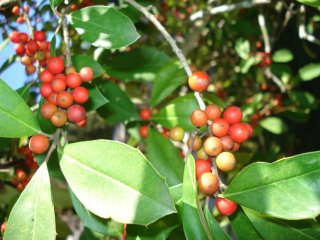 Maybe I should stay up with a flashlight if I want to keep up with what is going on out there during the night.

There has been frost on the lawn each morning the last few days.

I think being under double layers of down comforters is a more tempting location to spend the night. 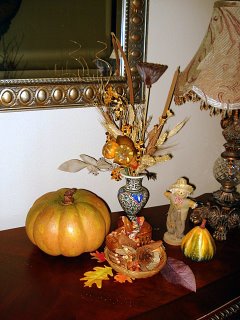 Inside is decorated for autumn. One of the drawbacks of living "down south" is that just when the weather finally gets autumn crisp going, boom, everyone is decorating for Christmas.

Christmas Day is the best day for autumn leaf peeking, for heaven's sake.

I'm considering becoming "Catholic" in terms of decoration time table. I hear they put up Christmas decoration (in the church at least) Christmas day, and the decoration stay up until Ephiphany in mid January.

Having Christmas decorations up that long would be considered odd here in Texas, where the tradition is to tie firecrackers to your Christmas tree and blow it up on New Year's Day.

It's a different world around here.
Thanksgiving fare includes deep fat fried turkeys, and I won't even go into Turducken. 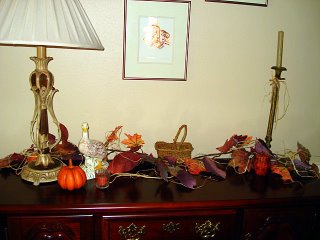 Or I could simply declare that I decorate for the climate seasons. The "Winter" decorations would go up on Dec. 23rd, and stay up until March 22nd or there about, when I would change over to "Spring".

My seasonal confusion gave a friend great merriment once, when I blithly stated that we could do something in the Spring, and flipped the calendar to Februrary. I was stunned to learn Februrary is in the dead of winter!

My only defense was that growing up in San Diego we only had two months of winter: December and January. Spring was Februrary through June, Summer was July through September, Autumn was October and November.

At least that's how it felt. Winter was the nippy time of year when you could wear a light jacket. Autumn was when a long sleeve tee shirt was needed, except for the dreaded Santa Ana winds that would whip the winds and temperatures high in mid day, and chill again at night.

The rest of the year, it was short sleeve tee shirt weather.
Not too hot, not too cold. Highs 74, lows 68.

Well, I'm enjoying a touch of nip. I've had plenty of autumns where it was warm enough to wear shorts. It may have taken a while to get here, but every where I look, I am seeing fall spendor. 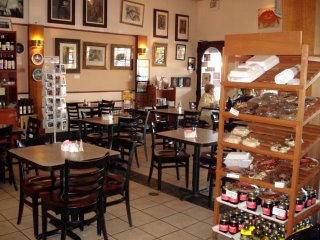 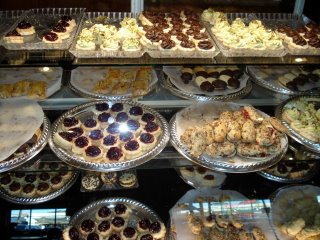 I do believe I dined in the presence of royalty. Houston style.
Posted by Thoughts on Life and Millinery. at 8:17 AM No comments: