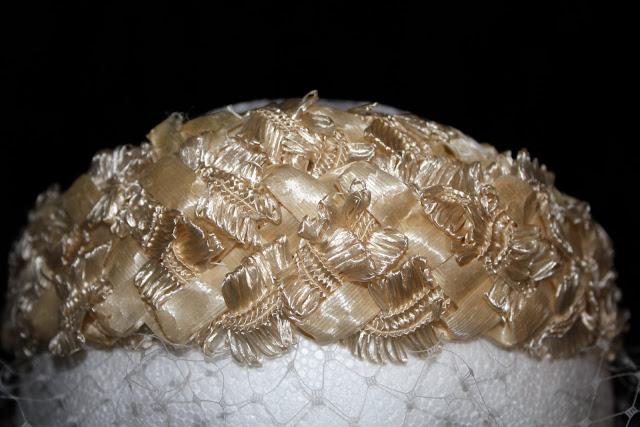 I have been advised that it is a good thing to regularly exercise one's creative bent; that one should just let loose and try out new ideas to explore what can be done with what is on hand. 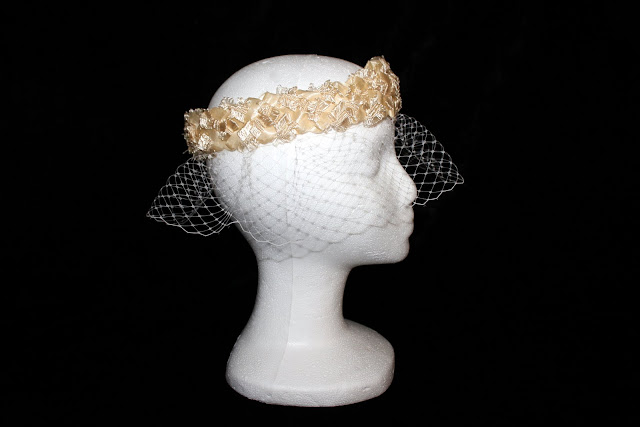 It was hot out, and I could picture a summer bride in a simple short ivory gown standing in a field of ripening grain. 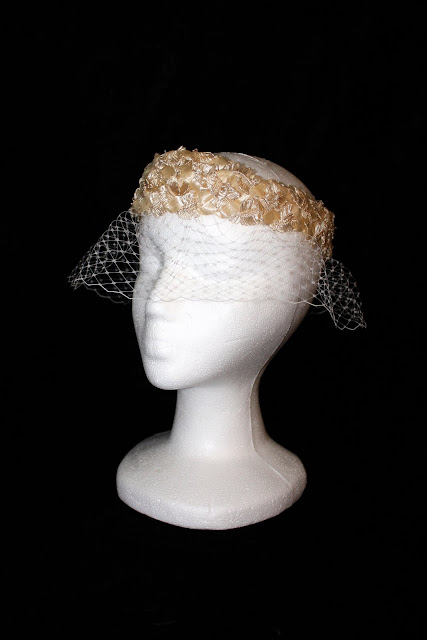 A circlet crown of straw...a "straw hat" elevated to a new level. 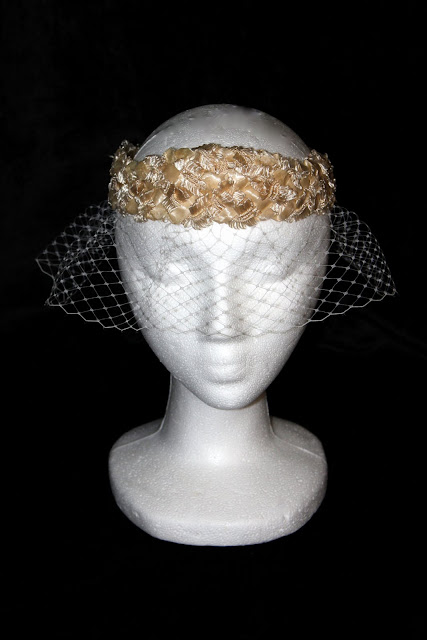 Compared to the glitzy silver and diamond tiaras, it is less "bling" and more of a quietly elegant sort of head piece.
I really like how it turned out. 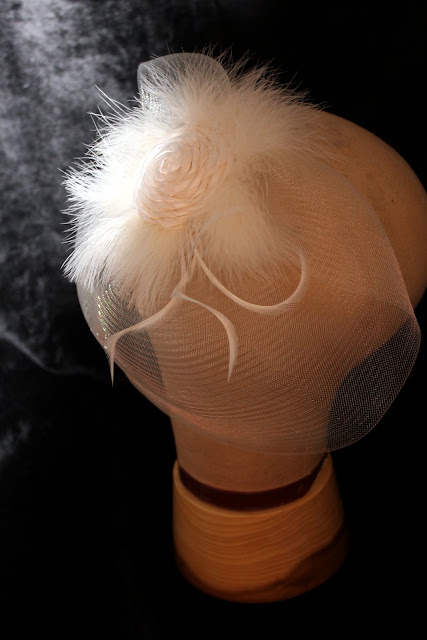 I've often been struck by how beautiful winter brides can be on snowy wedding days.
When my fashion illustration instructor designed her own wedding gown for a December wedding in Minnesota, she used white velvet for a cape and trimmed the hood in white fur.
The image of her in that gown...in falling snow...has never left my mind.
The exercise with what I had on hand:  Crinoline braid, satin ribbon, marabou quill feather and stripped Goose biots.
Inspiration: Winter Wedding. 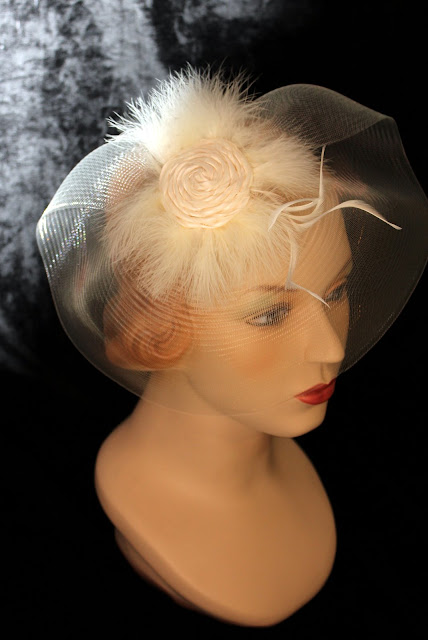 I finally worked out a solution to the seaming of the crinoline; a solution that added to the overall design in the end. 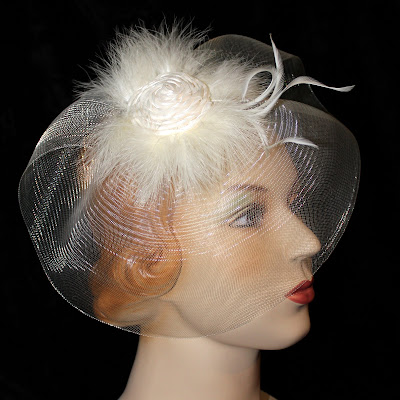 Curling the biots is always fun; the skinny feathers bloom as the quill is run over the edge of my scissors. 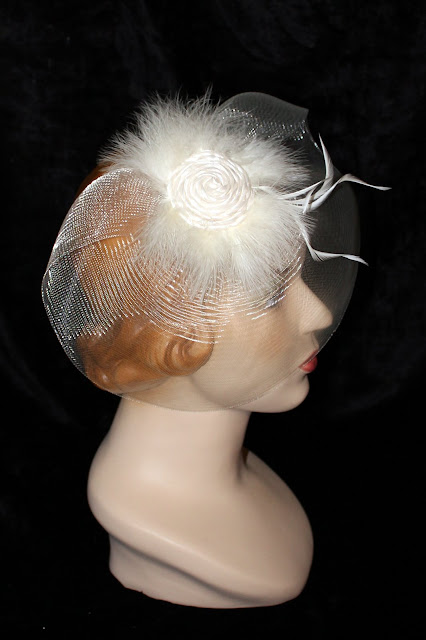 A bit of marabou feather actually does serve to add warmth to one's head.
The crinoline braid veiling reminded me of the way ice looks while the marabou reminds me of fluffy snow. 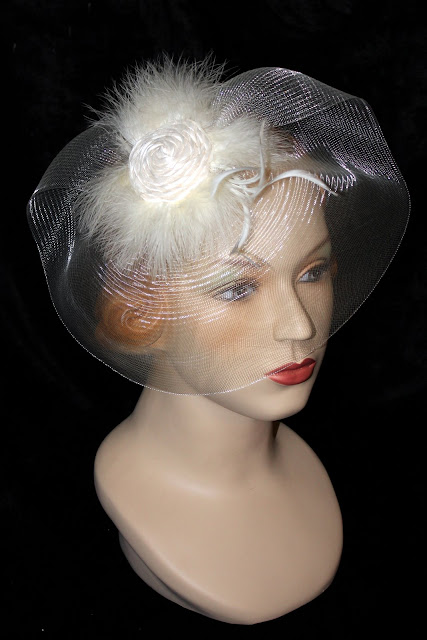 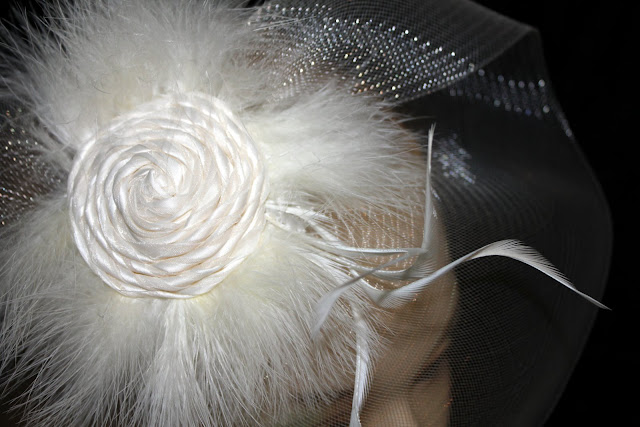 Usually I do learn something the first time I make a hat but have no supplies left to recreate the hat with the insights I gained the first time. 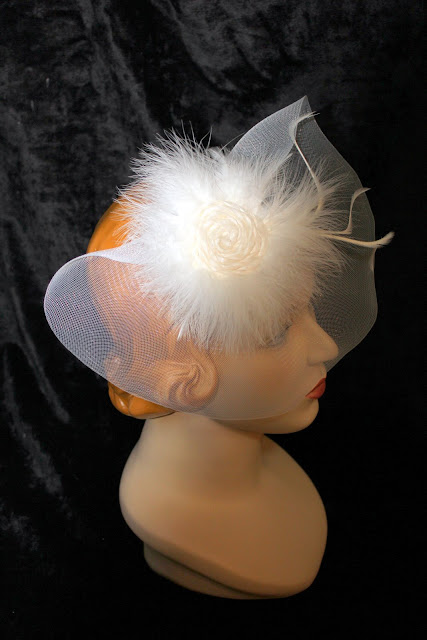 The white version was my first try. I really struggled to stitch the feathers on evenly while avoiding catching some design elements with my thread.
The second construct was done with elements created separately then layered together with a few carefully placed stitches. 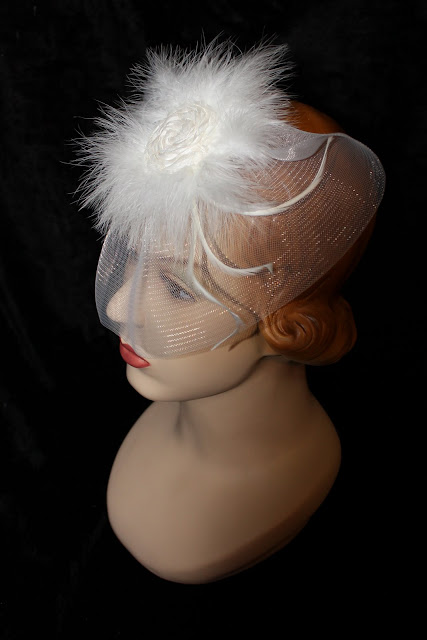 I also had a long discussion with myself about the biot placement.
When the bride is standing next to her groom I would want to not have a design feature between them, which is what would happen if the biots were place over her right eye.
Yet when she turned to face her groom, the biots would then be seen by those attending the wedding.
Since the majority of the wedding service takes place with the bride facing the groom, I decided to place the biots on her right side so the audience could see the detail. 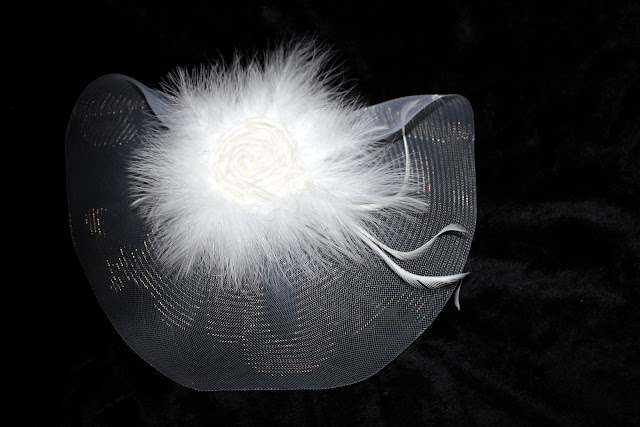 Leaving the back open and curled up on two sides was a decision made to accommodate any bridal hairstyle. 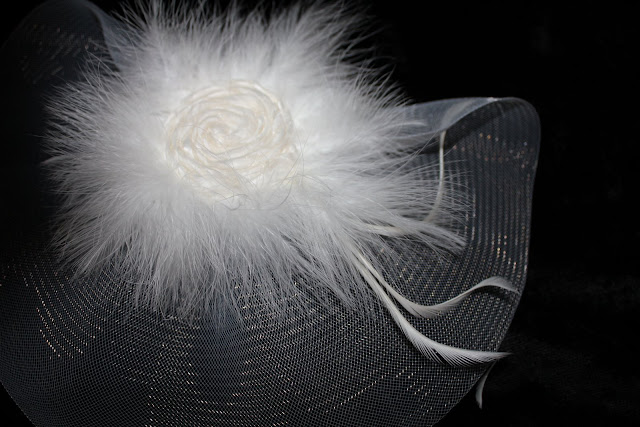 I liked this design for either an inside wedding or an outside wedding.
The veiling will not blow about during an outside wedding, and the crinoline catches light beautifully with every slight motion of the bride's head. A dusting of snow would make the design simply amazing.

Of course I learned still more things during the second ivory version construction.  I wonder how many times would I have to create this same design before I could make it without learning a bit more about technique and design flow.

I do know that wedding websites are showing mixed veil usage now:  fine netting flowing over french veiling or crinoline and crinoline being used twisted in sculptural forms that are quite complex. Black and white and other color accented veils are also being shown.  Pale pinks, greens and blues are tweaking the customary monochromatic bridal fashions.  Interesting.

Designing for an autumn wedding is still in my "Exercise" prompt list.  Considering how popular brown has been as a wedding color choice, I think a veil with autumn toned pheasant feathers could be quite interesting.  Or one with rich Autumn hues used in making velvet pods...hmmm...

It really is fun to design stuff in my head and occasionally attempt to actually make them too.
Posted by Thoughts on Life and Millinery. at 12:04 PM 8 comments:

Looking to Wear a Glorious Girdle 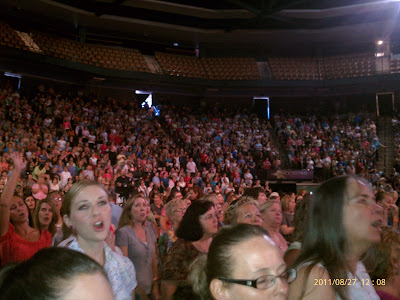 An arena filled with women; women who had come from nearby and far away.Wyoming and Idaho ladies had driven down for this event; other states and countries were represented too.
We were all at the Maverick Center this weekend for two days of an event entitled "Living Proof". 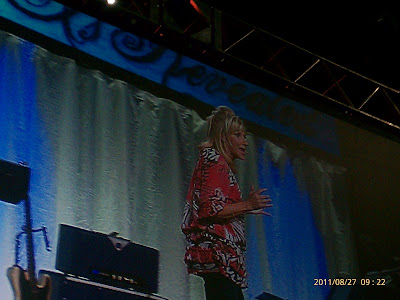 Our speaker was the internationally known speaker and writer Beth Moore. 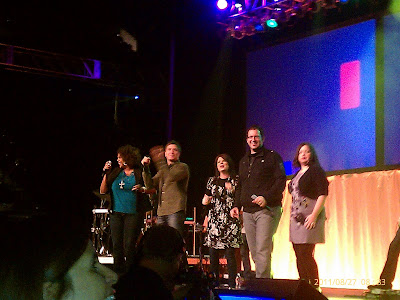 The worship team was so energetic and the whole arena was up and singing along with joy and sometimes tears.
(It was right after the closing music of the first session that I looked around and realized for the very first time exactly why make up was forbidden for Christian women for so many years.
Pass the kleenex...blot those mascara runs, blusher and foundation smudges and lipstick smears.
If modern Christian women who once thought forbidding makeup was totally restrictive could have one look at themselves after a fervent worship session they would all rise up and demand to have that rule reinstated once again). 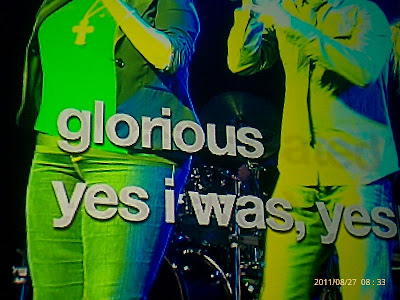 It was a glorious time, yes it was, yes it was.
The conference theme, taken from I Peter chapter one:
Five words:
When Jesus Christ is revealed.

1. Salvation finds it consummation...when Jesus Christ is revealed!
(We are saved and still being in process of being saved, until the when part happens.)

3. For now fire burns off the fake in us, then Jesus Christ is revealed!

4. We will see the ultimate object of all our affections when Jesus Christ is revealed!

5. All will have gone according to plan when Jesus Christ is revealed!
(All those painful transitions and circumstances that life flowed in our directions: we will see that ALL was according to plan).

6. Sober up and act up until Jesus Christ is revealed.
(The multiple addictions designed to numb us so we will not act up and proclaim the truth: the need to sober up is a wide spread call to us all).

7. Love each other purely until Jesus Christ is revealed.
(Enough with this flippant saying "Love you!" business.  Say I love you, put yourself out there to love, we can love only because HE first loved us).

8. All will be revealed when Jesus Christ is revealed.

After reading these eight proclamations, do you now understand why the tears flowed, the singing was loud and the time together was out of this world holy?

During the conference we all wrote down the words: I am a stranger temporarily residing in...adding the name of where we currently lived at the end.

After moving so many times, I know first hand the feeling of being a stranger and how hard it can be.  What seemed customary to me was considered eye blinkingly odd to those around me in each of my temporary residence.  Trying to explain what it was like where I came from was futile. Eventually I blended in...then we moved again.  And again I became a stranger in temporary residence:

Never, ever have I forgotten in each place that it was a temporary residences for me.  My permanent address for the past 45 years has be Heaven.  Sooner or later...and each day I know I am closer to finally no being a stranger, and closer to getting to go home.

I am so comforted by the phrase: All will have gone according to plan when Jesus Christ is revealed.  So often I find myself recoiling at the "plot changes" in my life and in the world around me.  Sometimes it feels like my life story is being written by multiple authors who haven't conspired to make a unified storyline.  It seems they are determined to write in their own plot line with little regard to what when on in the pages written before.

I have to keep reminding myself that my life and my times are the result of One author who has begun the story at the foundation of the earth and who already written the final page, fully satisfied.

Which brings me to this post's title:

"Therefore gird up the loins of your mind, be sober and rest your hope fully upon the grace that is to be brought to you at the revelation of Jesus Christ".

She explained that the word gird is the same word that is used in the word "girdle".
She told a funny story about how growing up in the South ALL women over the age of twelve wore girdles when they went out...no whimpy things like today's spanxs, but heavy constricting garments that were designed to suck in the body from waist to low thigh.  We laughed as she demonstrated how difficult they were to pull on and opined that perhaps the main reason women wore dresses to church back in those days was so that the girdle could be pulled off as soon as possible afterwards, sometimes even while sitting in the front seat of the car on the way home.

An image was artfully constructed:  There is a need for each of us to pull on a head girdle, to restrict and suck in our thoughts from spreading out where they best be not spread out.

I just might have to scout up an old fashioned girdle, stick it on my head so I know what it would feel like to wear it thus, and then take a picture of myself so clad.

Isn't that a word picture to love? Never thought wearing a girdle would ever seem to be such a great idea.