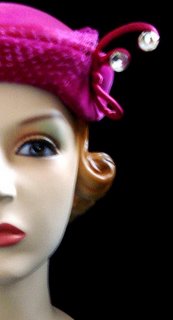 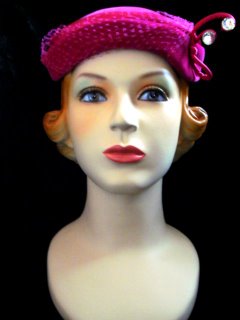 I will never know. Instead I went home and dug a few dollars from my purse, made my purchase, and returned home with the hat, a few memories, and a mystery.
Posted by Anonymous at 8:49 AM 1 comment:

Millinery: Sometimes it's in the blood 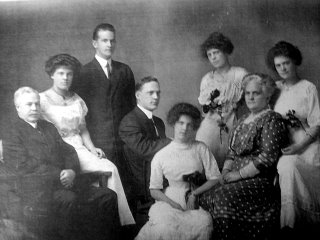 Occasionally I get asked how I became a milliner. "How" is a lot of things, such as practice, practice, practice making lots of hats before I became comfortable referring to myself as such. Taking a millinery class at Houston Community College was probably the biggest "how" in the process.

But I also think it was just something in my genes.

The photography above is of the Brosnan family of Springfield Massachusetts, taken some time around 1915. Garbed in the classic Edwardian splendor of a white lawn dress, waist corseted, and a longstem rose tucked into her ribbon waist band, the girl at the far left was my great aunt Florence. She grew up to become a milliner.

Pictured below is one of the two hats that I own which she created in the 1960. It actually was a collaborative effort; my dad shot the pheasant from which the feathers were plucked. Now there's a family project for you! 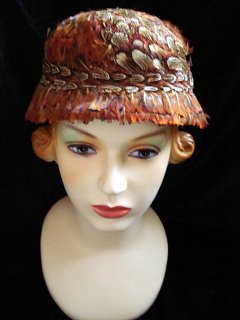 My grandmother Madeline is seen in the center of the photograph.

And for you trivia fans, the inventor/patent holder of the paperclip was Cornelius J. Brosnan, my great grandfather, the gentleman in the far left of the photo.

Millinery: Singing in the Rain 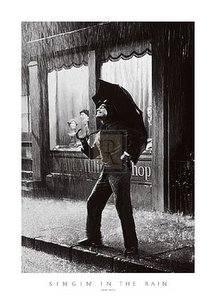 While the western United States sizzles, we here in Texas are getting lots of rain. I love rain, and I love the song "Singing in the Rain".

Now how many of you remember the scene where Gene Kelly dances in a deluge, splashing and tapping down a street, singing and swinging an umbrella.

Ever noticed what shops he goes by?

Take a look...and I wonder who's creations are on display in the window of the LaMallie Millinery Shop.

No wonder he's dancing. I'd be dancing too, in the rain even, if there was a cute little millinery shop like that on the main street of my town! 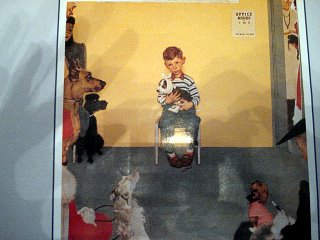 Historically, veils were just another design element associated with hats, as common as today's trimmings of flowers, feathers, and ribbons.

I've photo-copied the picture in full, and below is a close up of the lady in the upper left hand corner.

She is apparently visiting the vet with her black standard poodle, which is seated obediently by her side. 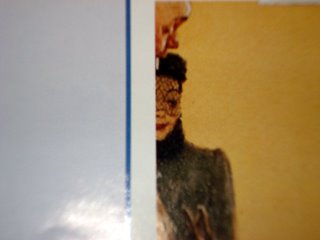 A trip to the vet, just another mundane errand to run. "Let's see," I imagine her saying, "Where did I put my veiled torque?"

Personally, I am both fascinated and puzzled by veils. Fascinated because veils were worn with such aplomb by the likes of Katherine Hepburn, and other fashion icon as contemporary as Madonna. Puzzled, because I am never sure when to wear one.

Currently wearing a veil at any time other than down the aisle on one's wedding day causes children to stare, and men to rush over to strike up conversation 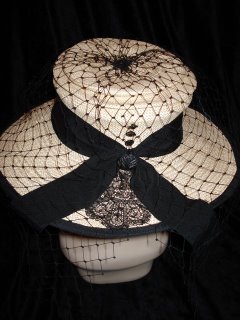 Explanations are demanded, and I really can't come up with a good one, except I like how veils look on a hat, and am slightly less sure of how I feel about how they look on me.

My dad recalls his 1890's born aunt, (who later held a degree from Columbia and a Masters from USC) as frequently wearing day hats with veils. She appeared, as he put it, mysterious.

Here are two veiled hats I've created, that I actually do wear frequently. They are just the thing to make me feel elegant, and casual at the same time on a hot humid day. And if someone thinks I look mysterious in them, well then, so much the better. 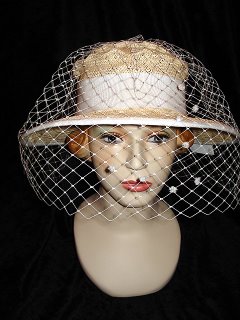 Posted by Anonymous at 10:31 AM No comments: 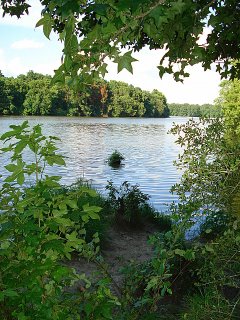 This is the part of Lake Houston that is about a football field from my house. Lake Houston is a man-made lake, and goes for many miles down towards the gulf. It is really neat to walk to, as there are paths all around the lake, winding through woods and meadows.

I have seen fireflies in the loblolly pines at night, and deer, and several kinds of snakes (eeekkkk!)

The water is a muddy blue, as the soil is clay around this area. That real southern "muddy water" motif, along with cicada sounds in the trees, warmth, humidity, and cypress knees poking up around the water edge makes it all seem "another world" to this southern California native. Sometime I just can't believe I am so lucky to have all this just a short walk from my front door.

I've swam in the water, just to say I did. You can almost walk all the way across up to shoulder level. People do catch fish, and B. and I bought flies to go fly fishing, someday. 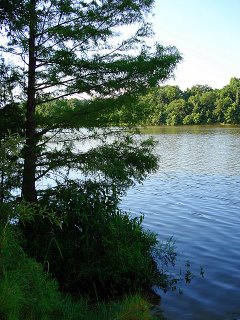 as a beginning of a four season study. 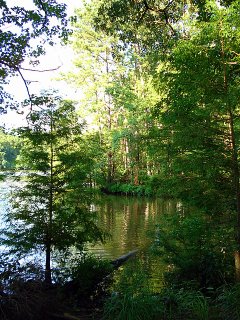 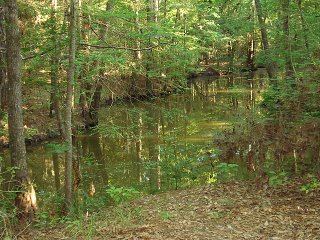 Posted by Anonymous at 8:48 PM No comments: