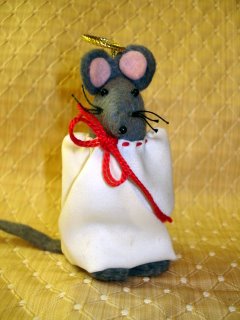 Those mice each came with a poem. I'd love to know who dreamed up each mouse and poem.

This mouse is "Gabriel."
His poem reads:

"Gabriel, Angel of the Morn
Shall he, or shall he not
blow his horn?" 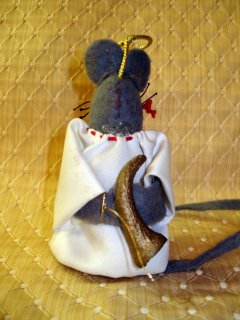 His little horn is a gold painted wooden pod from a type of eucalyptus tree.

Very clever use of natural materials, don't you think?

I wonder how many people would understand the literary reference to Gabriel's Horn?

Gabriel Mouse was created in the 1960's. By the 1970's most people were pretty convinced mankind was doomed, and the earth would be drowning in overpopulation, starvation, pollution and cataclysmic events by 1990.

Hal Lindsey's book The Late Great Planet Earth was being read by most Christians, and "End of Times" peril was discussed constantly among the college aged population, which included me.

Most non-Christians had decided that having children was just plain wrong, due to environmental and population issues.

US population growth tanked from 1970-1980. The thinking was so pervasive that when I got my positive pregnancy test back in 1977, 10 months after I got married, the test provider asked if I would like to schedule an abortion.

All my Christian college friends were 180 degrees out from contemporary thinking.
We all wed, and had kids chop-chop, feeling as though Gabriel would be blowing his horn any day, and if we wanted kids, sooner was the only option.

By 1982 the tide had changed. "Baby on Board" was trumpeted from yellow plastic diamond shapes hanging proudly in car windows.

I always rolled my eyes at those things...like I was planning on ramming your car just for the heck of it, but oopsie, you've got a baby in your car? Shoot, now I've gotta go find ANOTHER car to T-bone. RATS!

Or maybe "I'm driving like a distracted moron only because I can't stop making worshipful glances at little Jeremy..."

Having kids in the 1970 was an act of social protest. The demographic upshot is interesting to extrapolate today, especially in terms of employment and housing markets.

9/11 launched another round of apocalyptic perspective. For awhile I was checking the online news sources hourly, and reading international news publications, trying to stay abreast of the alarming trends.

So here I am, on the last day of 2006, and I realize that I still believe there is a Gabriel, and that he shall, indeed, eventually blow his horn.

Posted by Thoughts on Life and Millinery. at 11:27 AM

I remember all of that...

Now I choose to be comforted by the fact that God is sovereign and nothing catches Him by surprise..