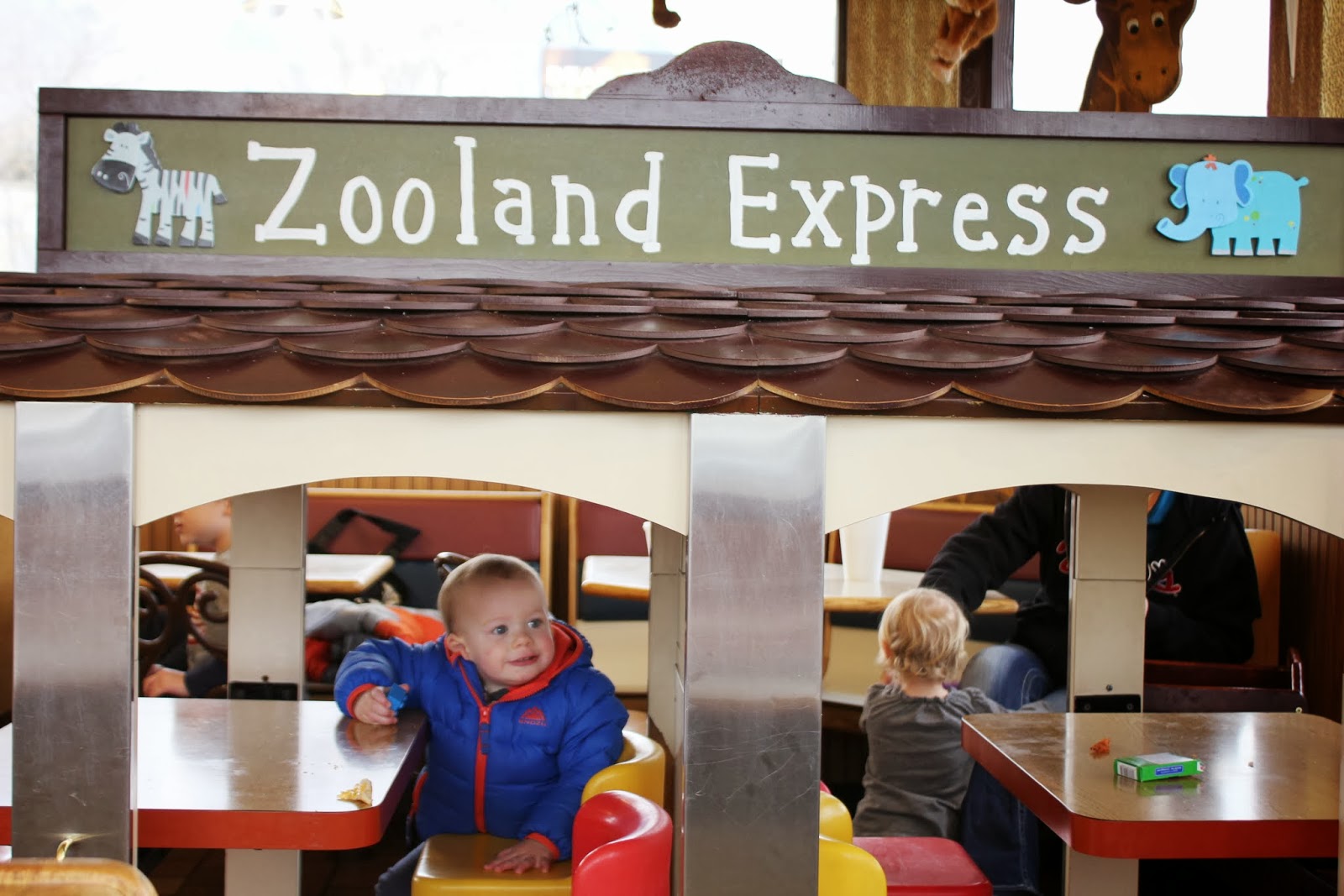 At almost 21 months, Luke has developed a slight obsession with anything "choo choo" related.
Happily, a local restaurant called Shivers is both child and choo-choo obsession friendly.
Taking Luke there for lunch on a cold January afternoon was a no-brainer.
He walked in and immediately seated himself on the train. 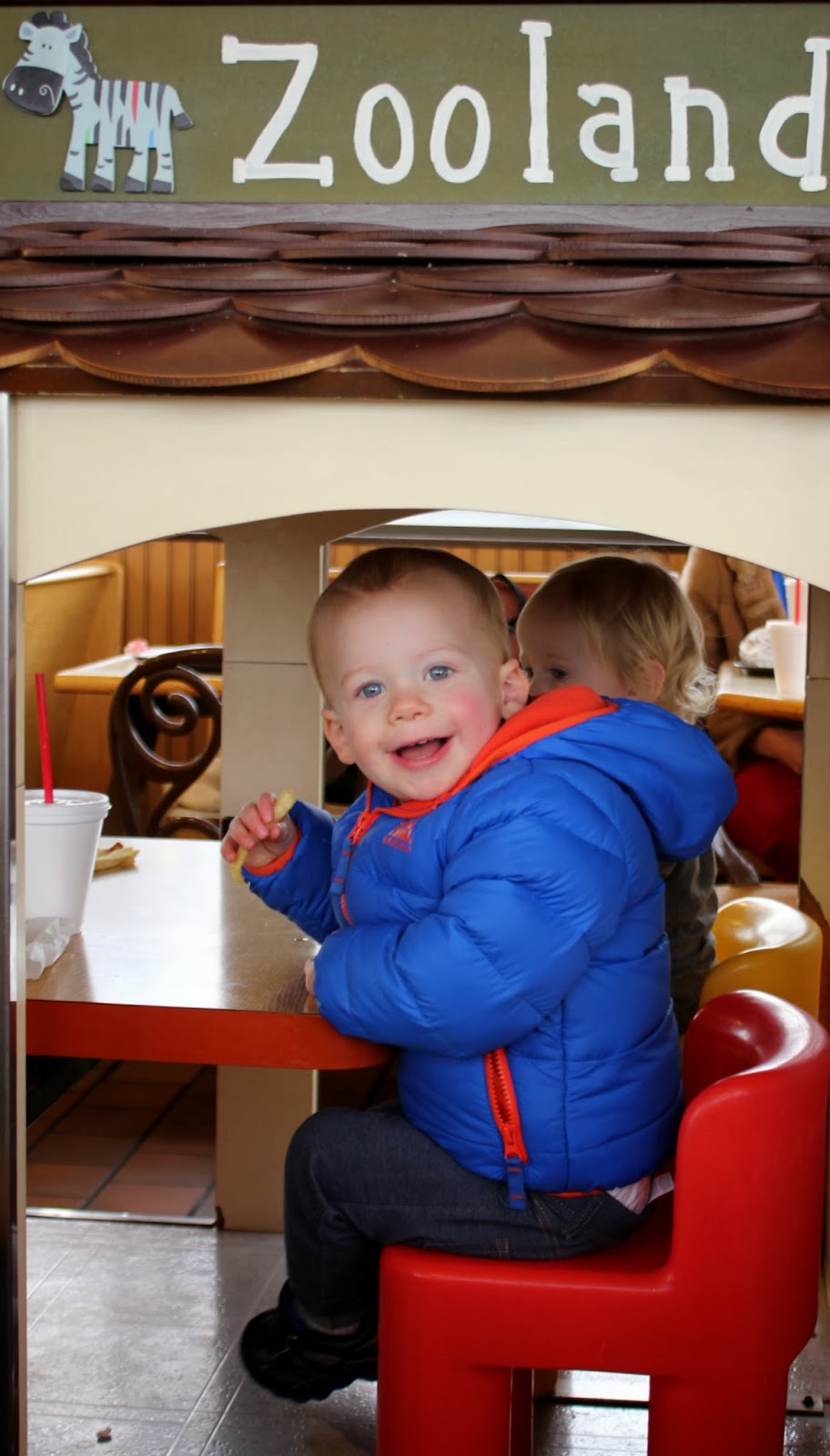 Doesn't that smile say it all?
The French fry...well, we hadn't quite ordered yet. 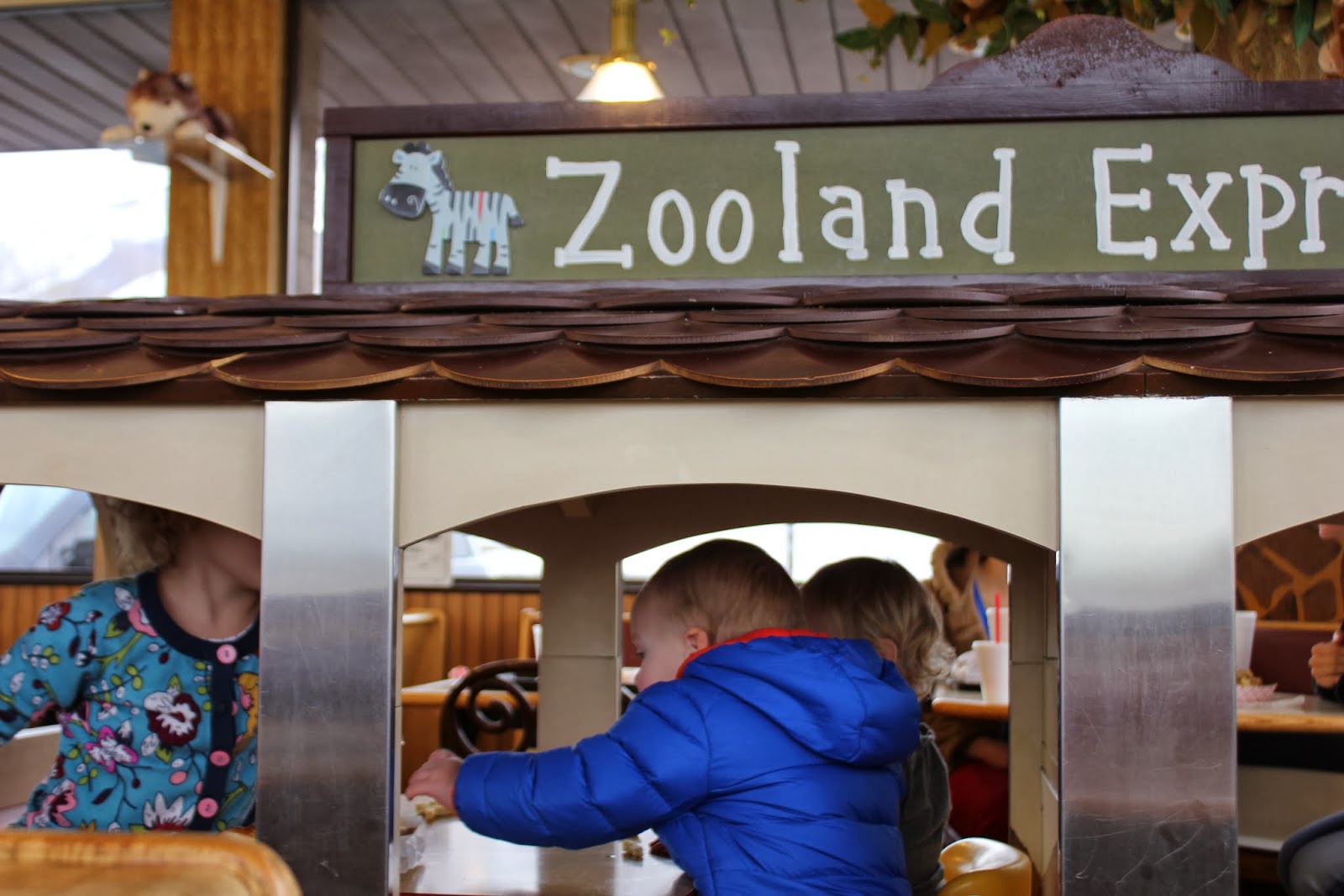 He just made himself right at home and helped himself to the pile of French fries that were on the table.
The little girl who owned the French fries was rather shocked at his behavior. 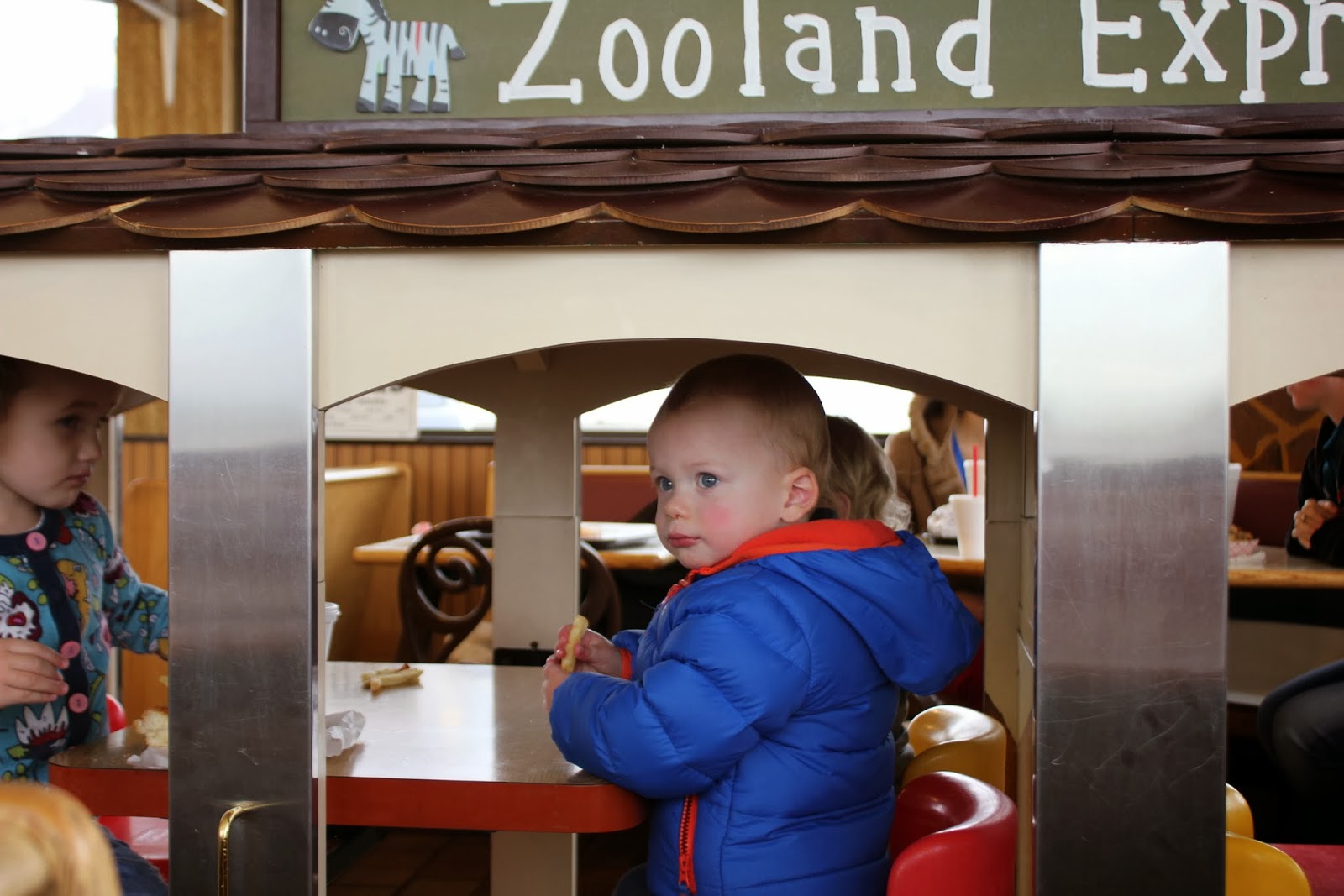 Her mother told us and him that it was just fine if Luke helped himself.
(This is kid is just like his Daddy, who blissfully went through toddlerhood life charming everyone into giving him whatever he wanted.) 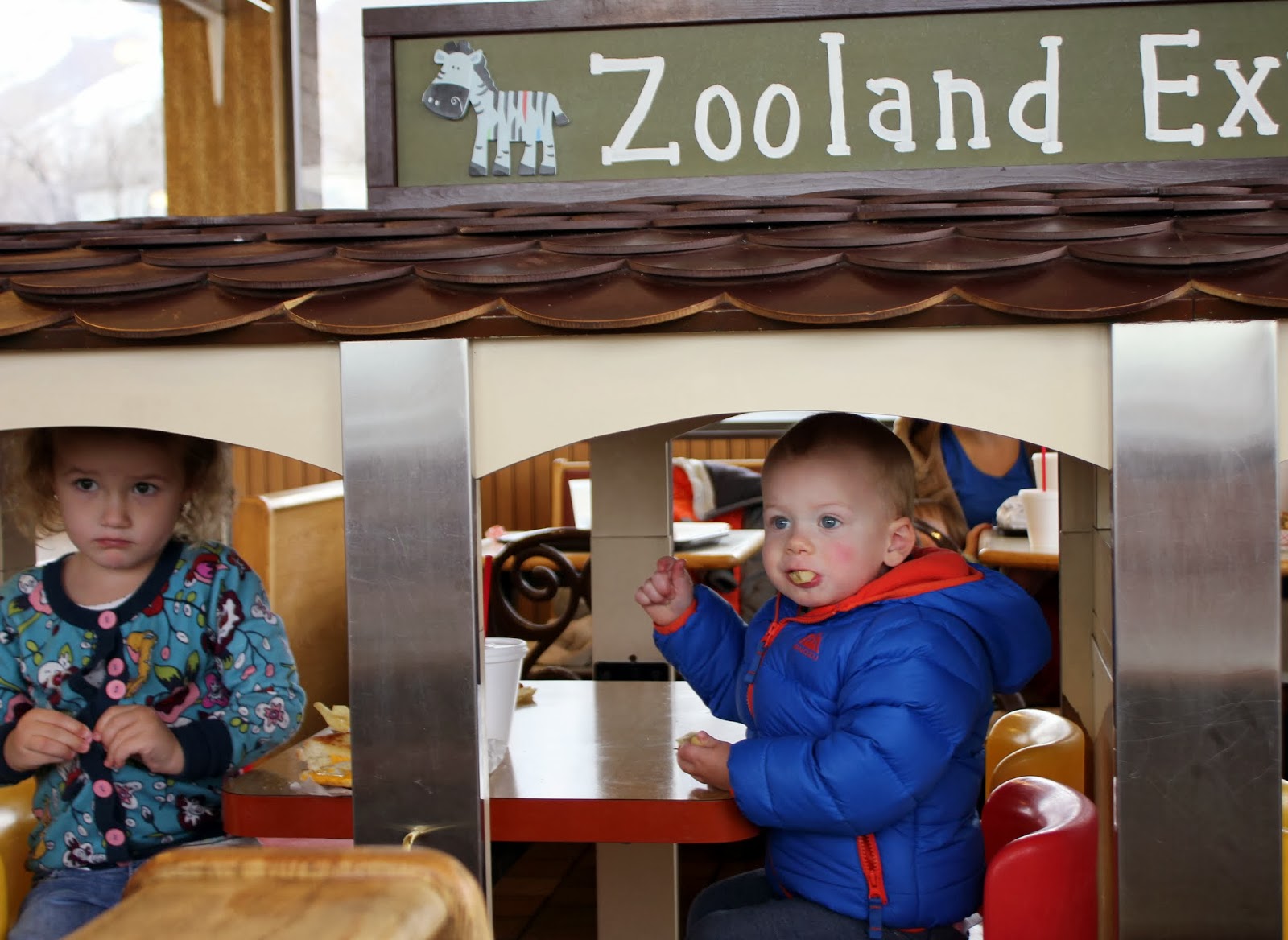 His manners still need a little work.
Her face tells how she is feeling about all this. 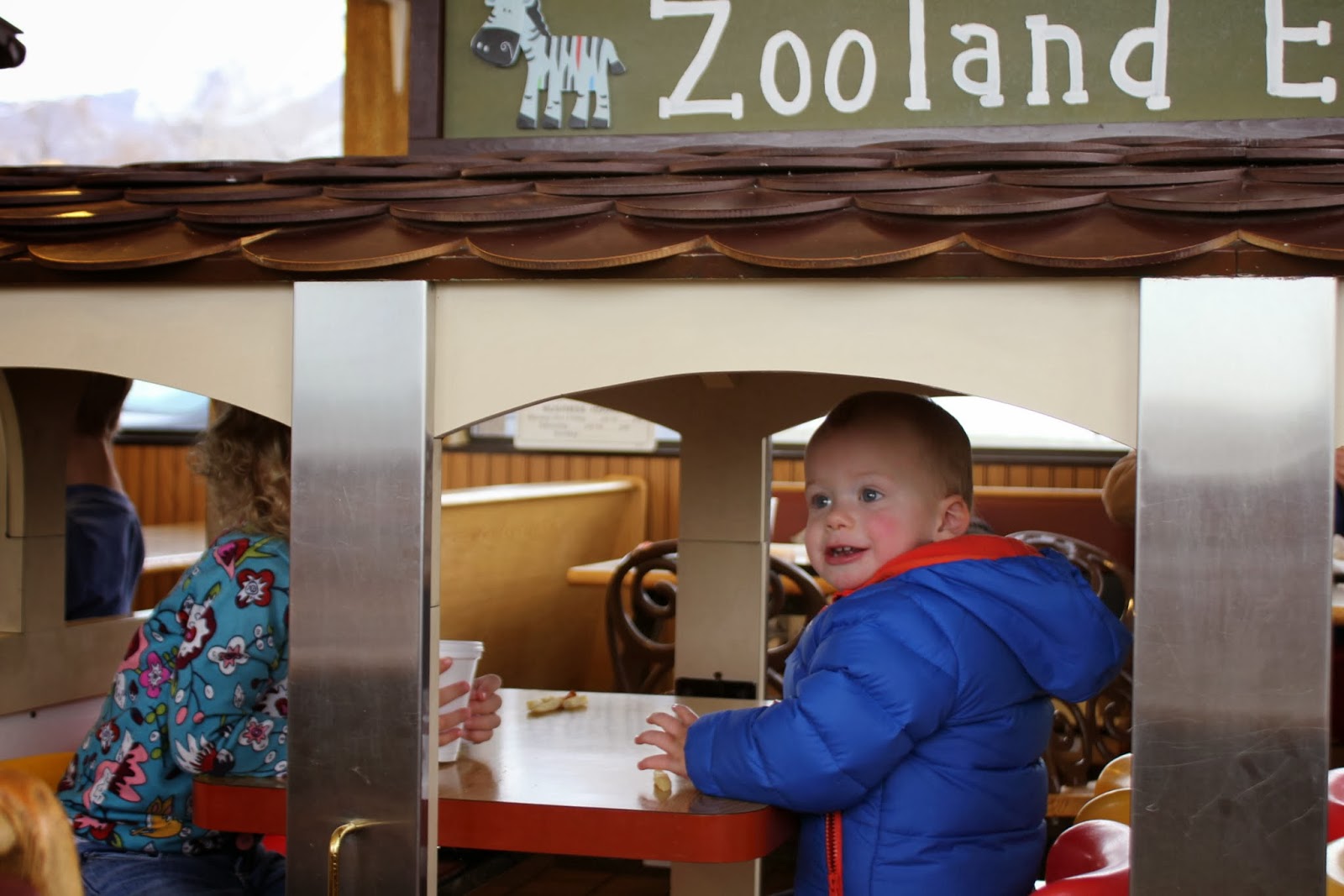 She leaned in to try to explain that those are HER French fries. 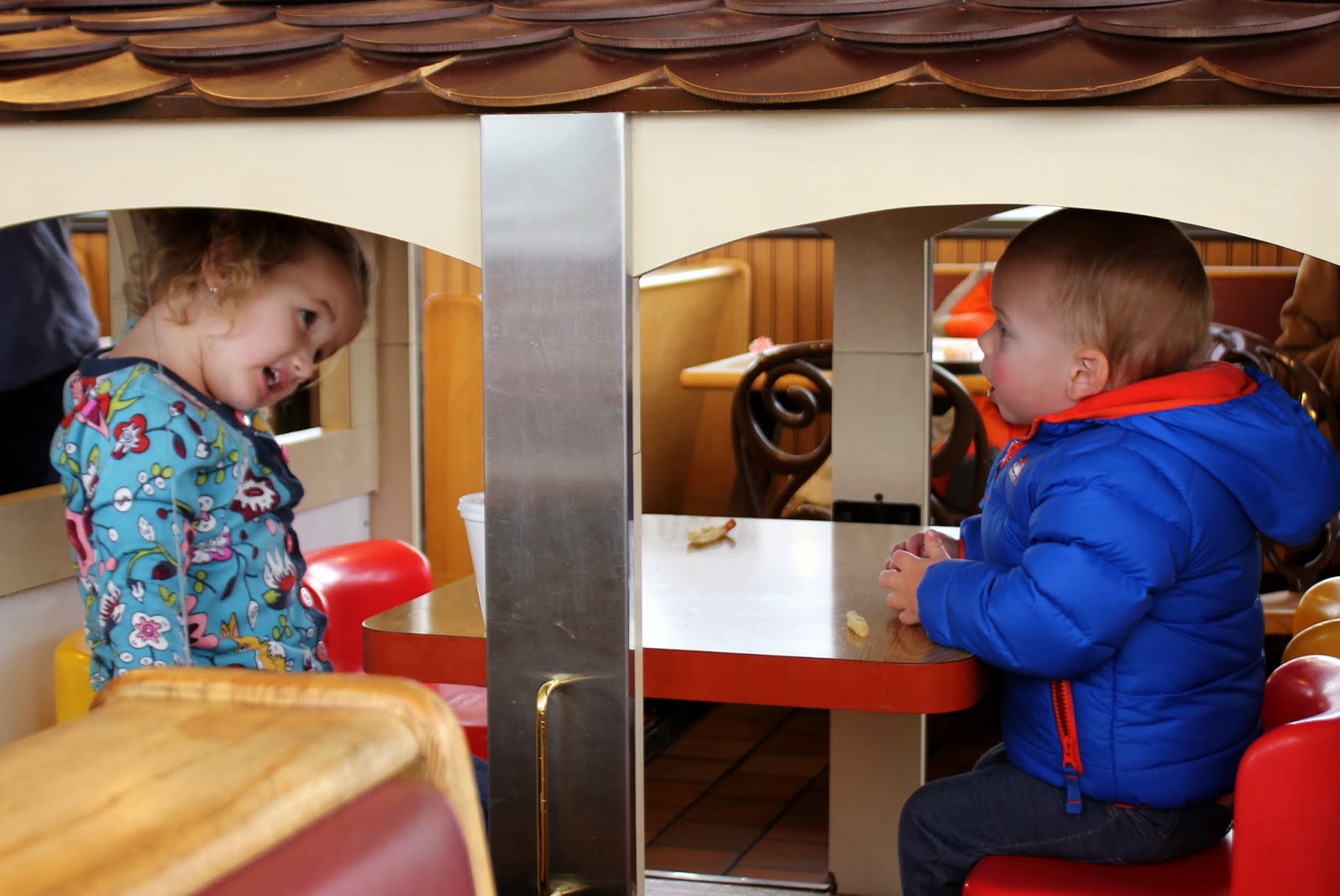 She tilted her head beguiling and Luke listened. 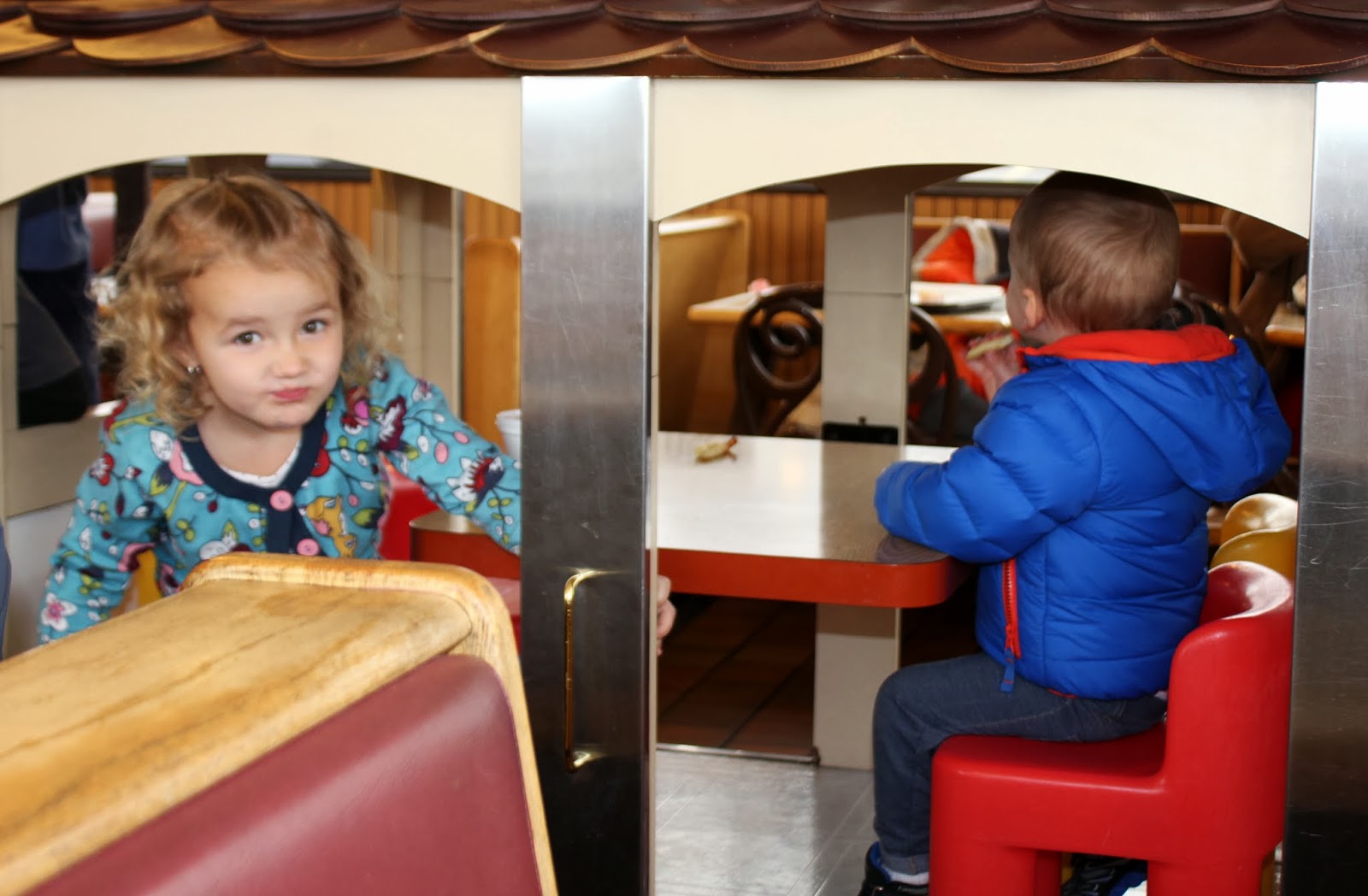 Apparently he didn't listen well enough to what she was saying.
In goes another French fry.
"I'm out" you can almost hear her say. 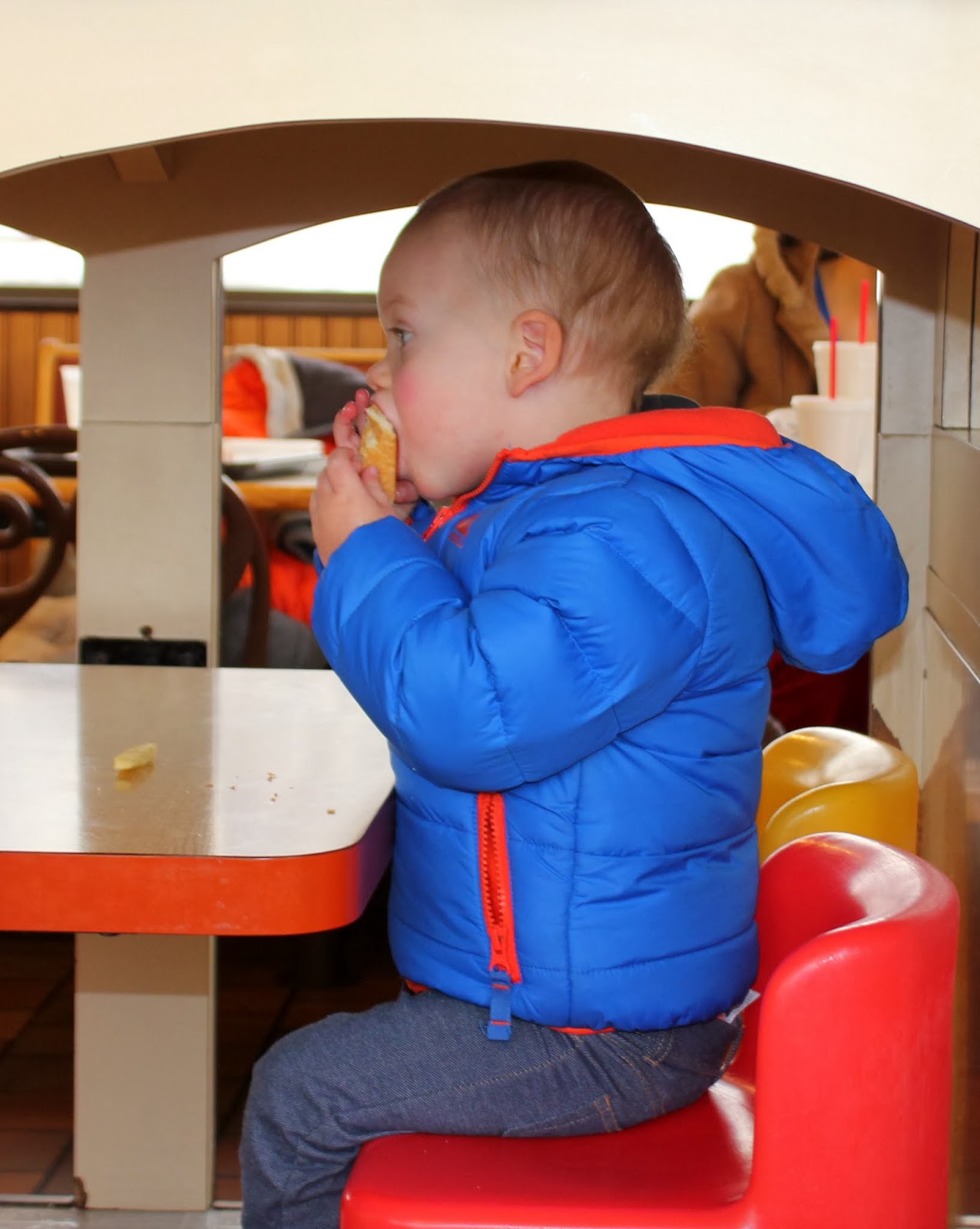 "Eh, who cares about her.  This grilled cheese sandwich rocks." 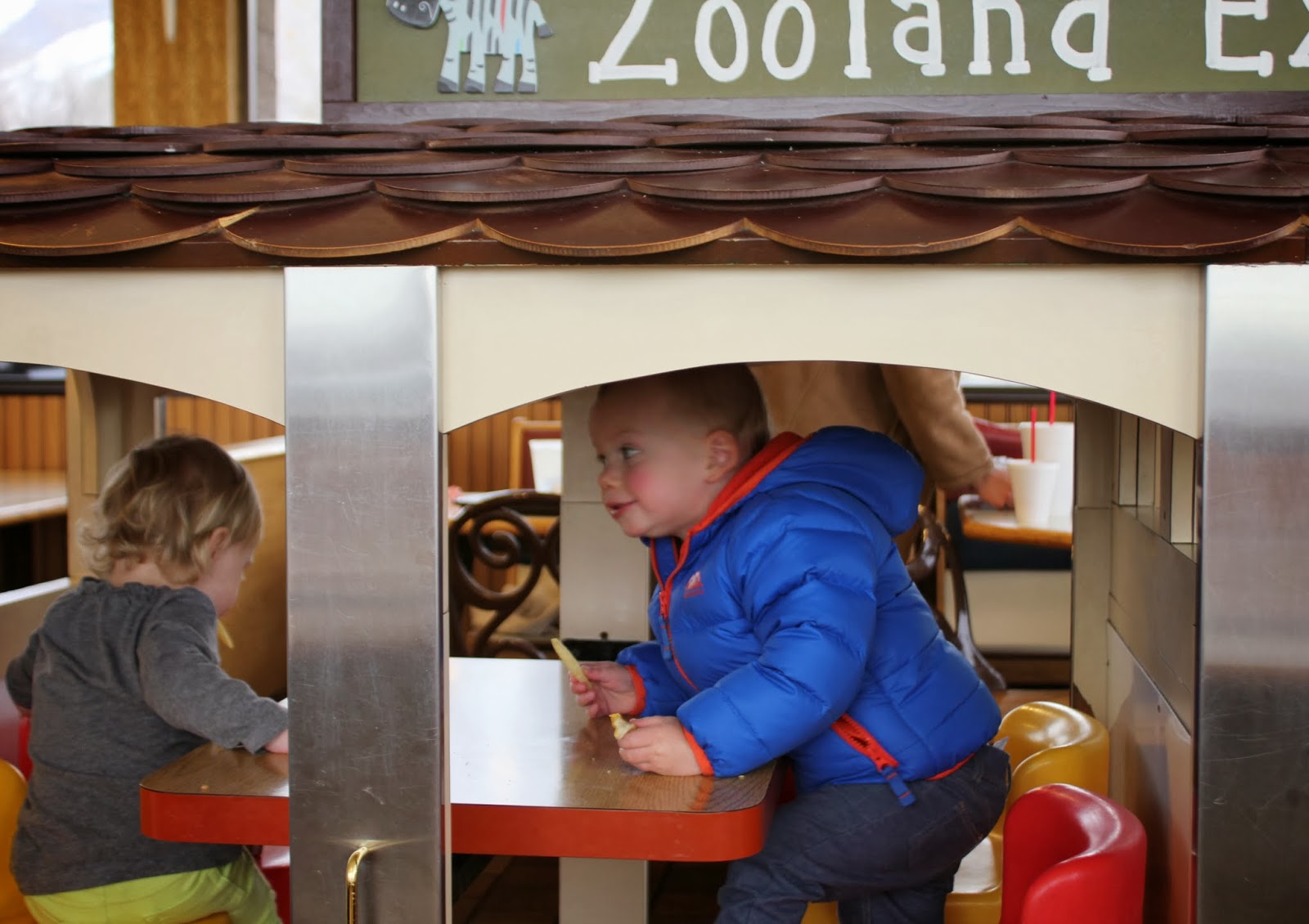 Moments later another little sweetie climbs into the train car.
"Hey there Honey, you new in town?  Want to have one of my French fries?" 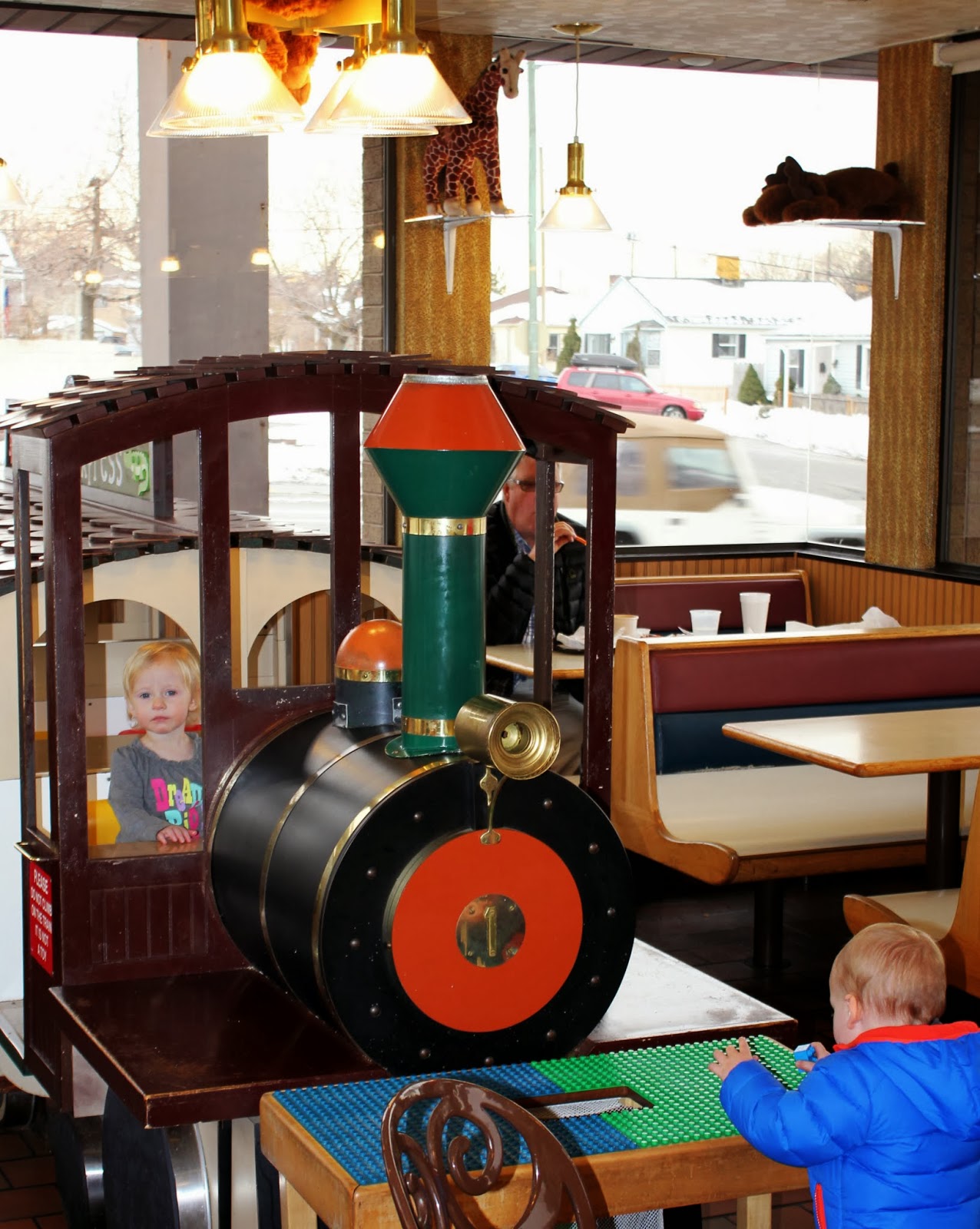 She seemed like a more tolerant lass.
And she apparently feels that girls can be train engineers too. 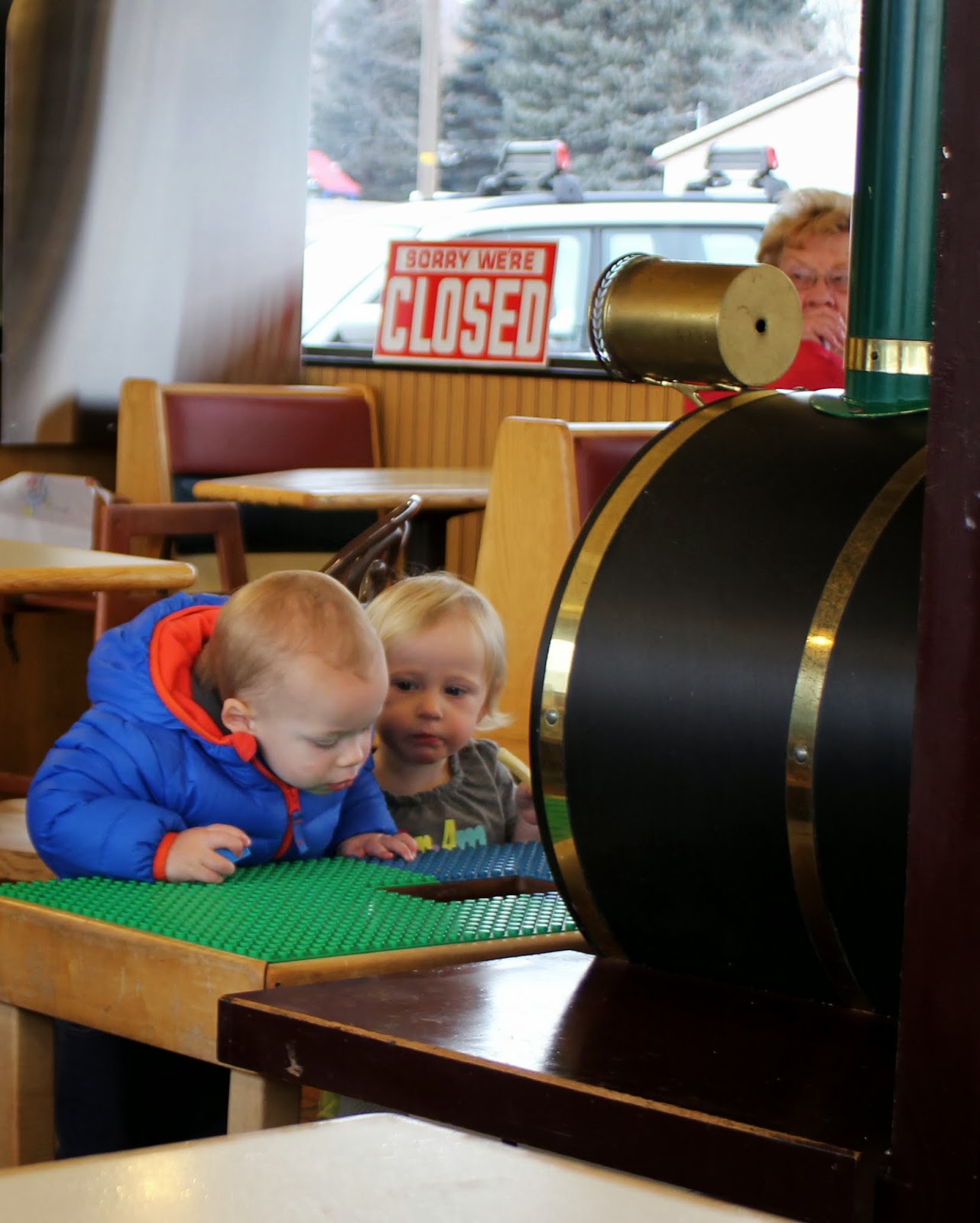 This is going rather well, don't you think? 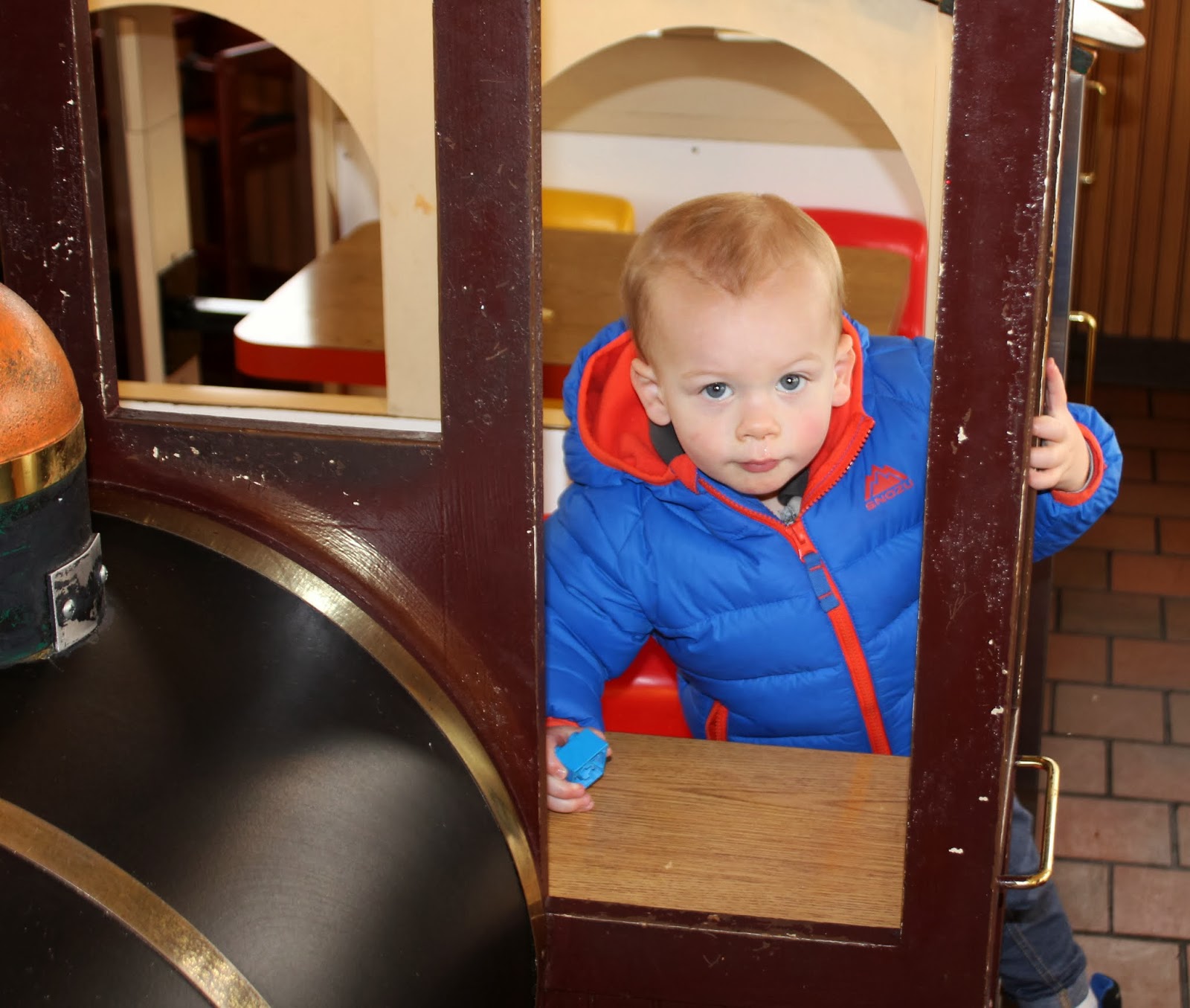 "It's time to go Luke."
(We have had years of practice saying "no" to little boys with big blue eyes.)
Luke climbs out of the train and follows us to the front of the restaurant. 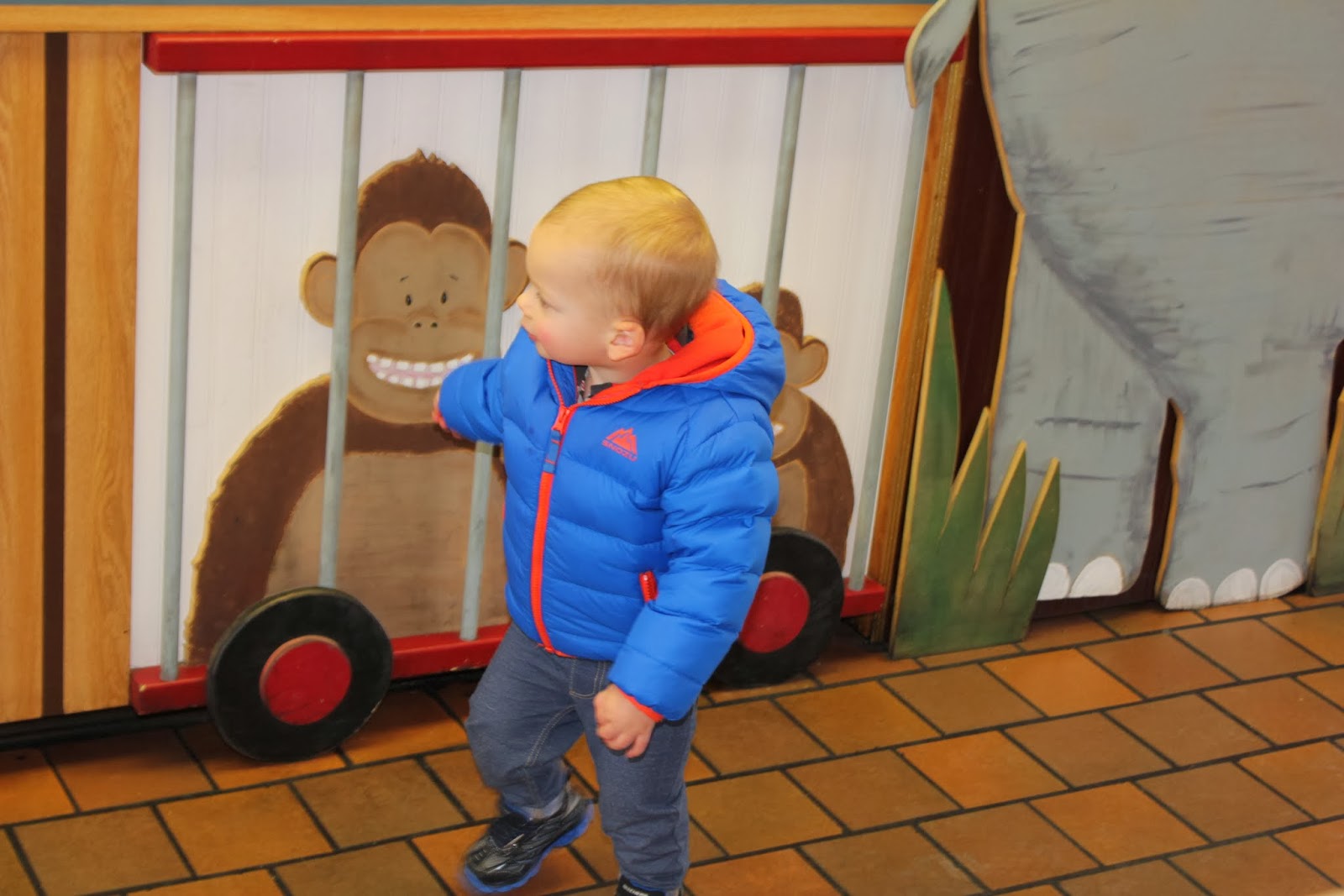 "Say bye-bye to the monkey."
He walks and points at the various zoo animal cut outs in the front of the restaurant.
I am rather surprised to hear him attempt to say "monkey" "hippo" and "lion". 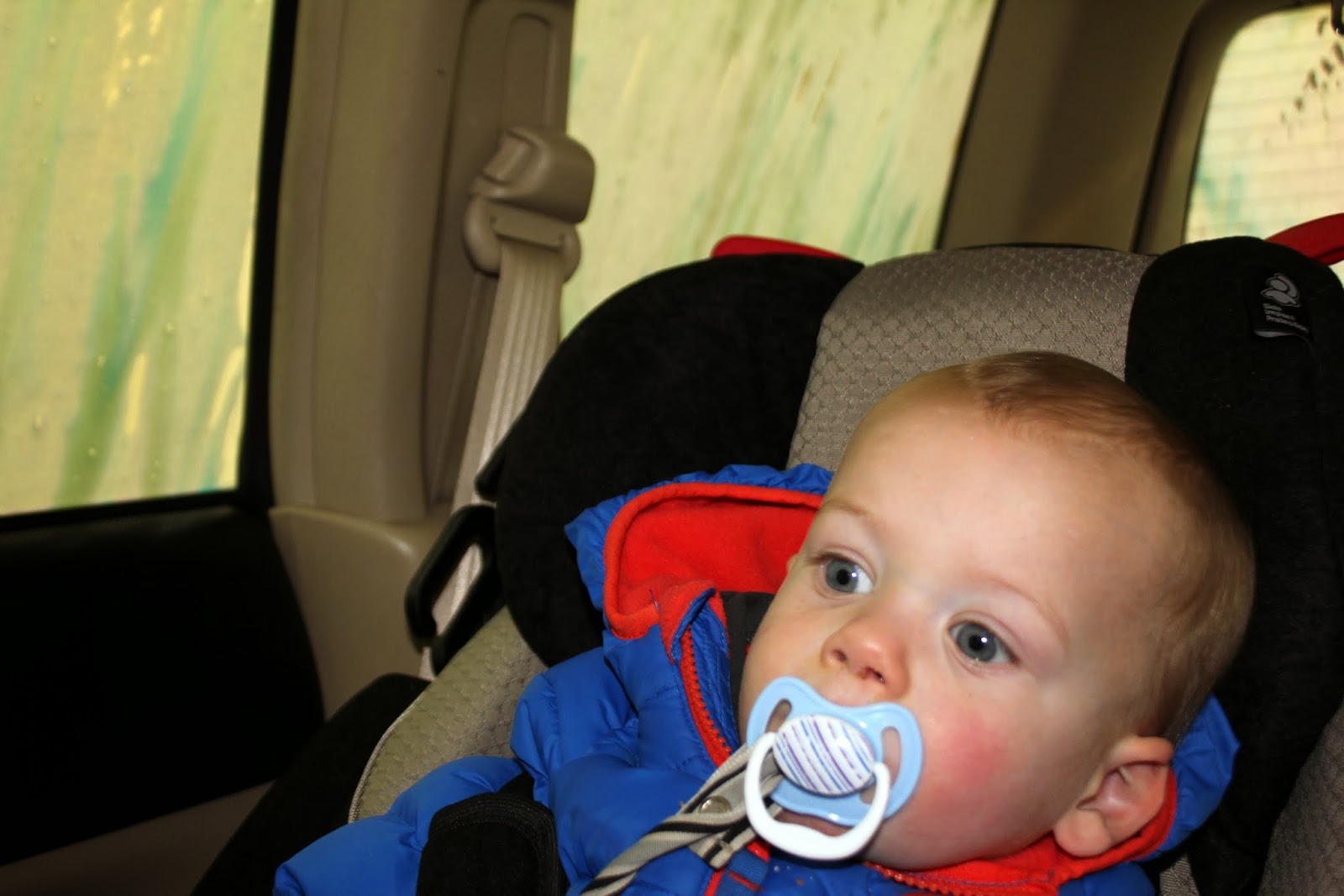 On the way home we drive through a car wash.
This may have been his first car wash adventure. 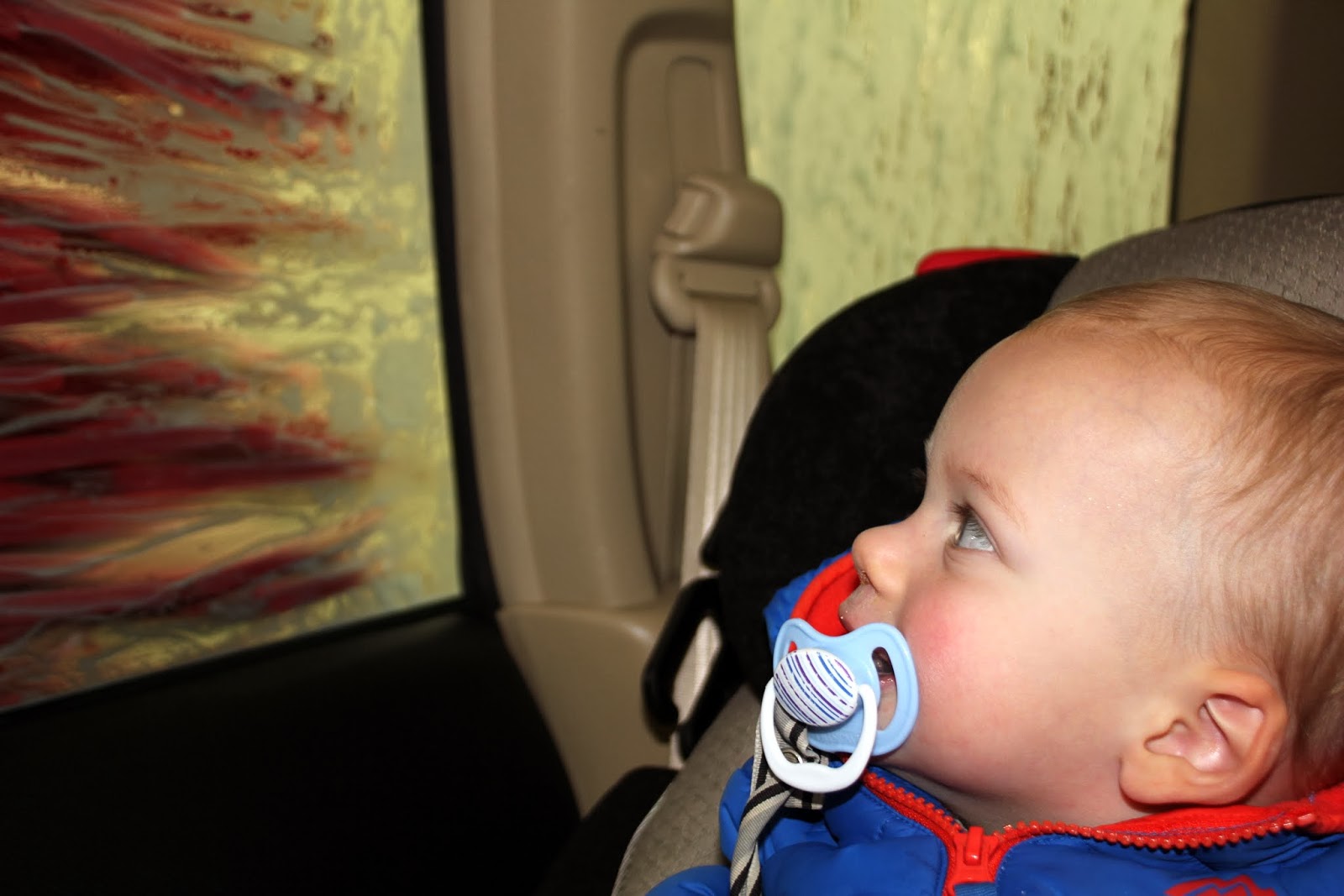 A trip through the car wash was always a big hit when my kids were little. 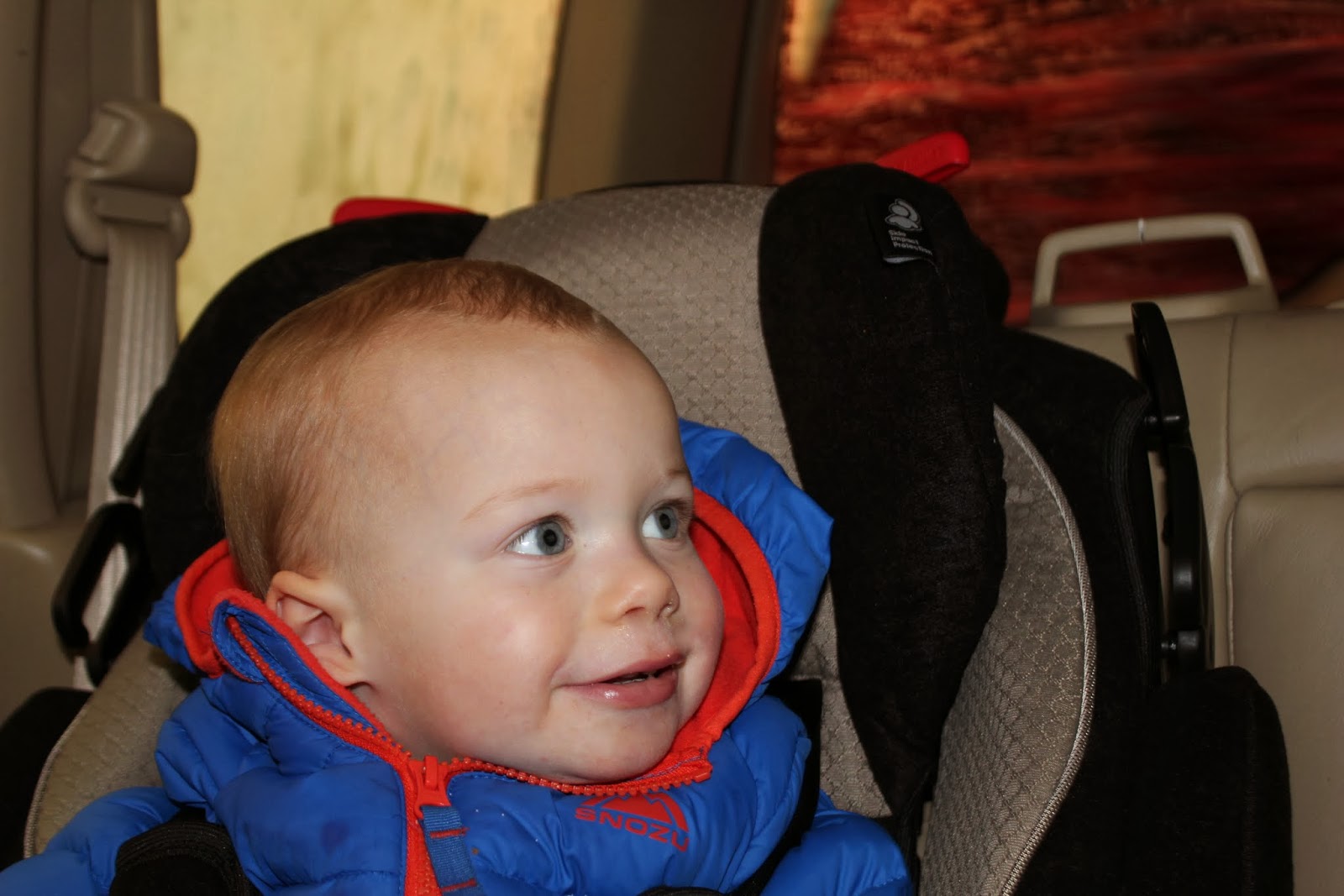 Looks like another generation is going to be a car wash ride fan. 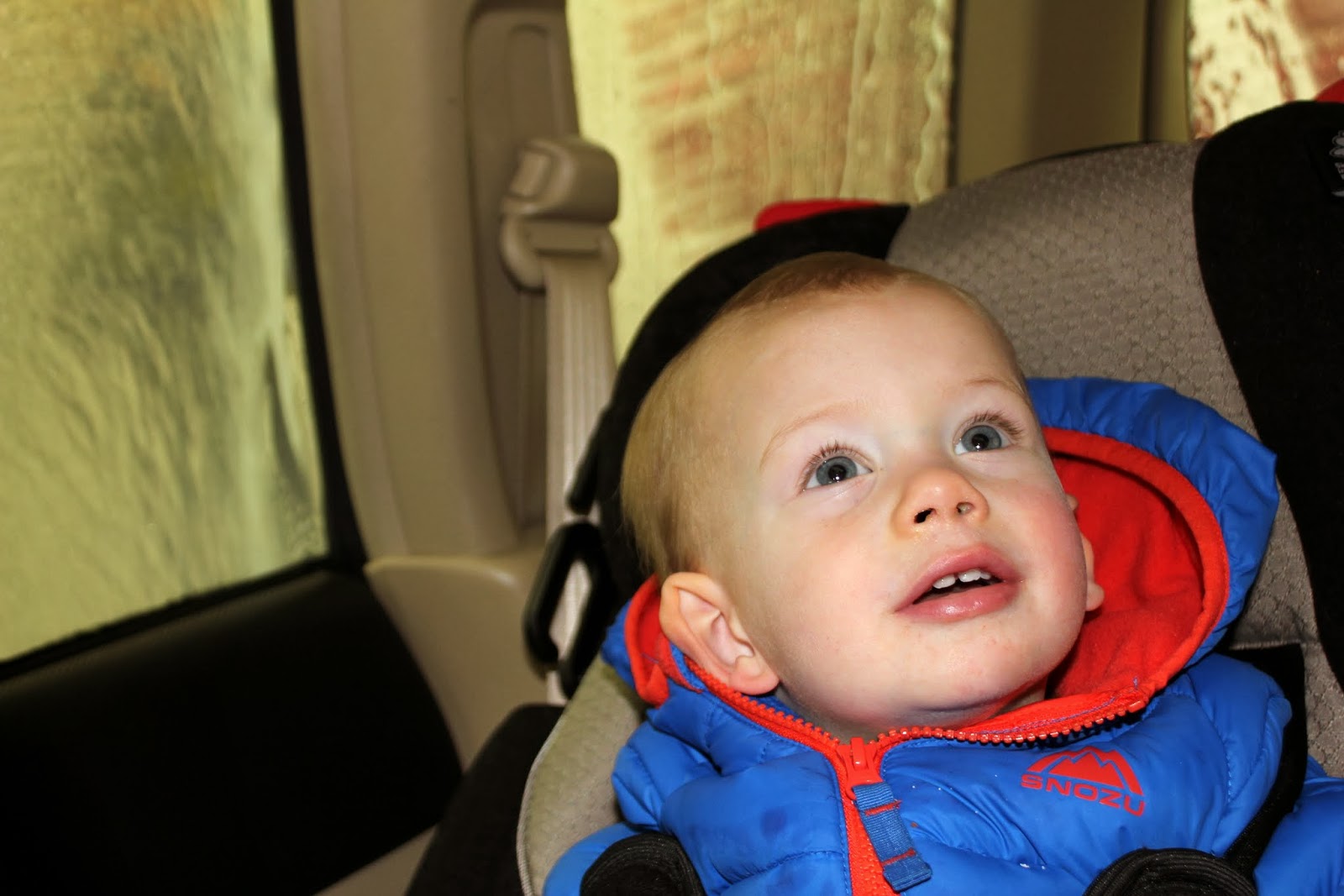 My kids didn't get to watch the car wash through a sun roof. 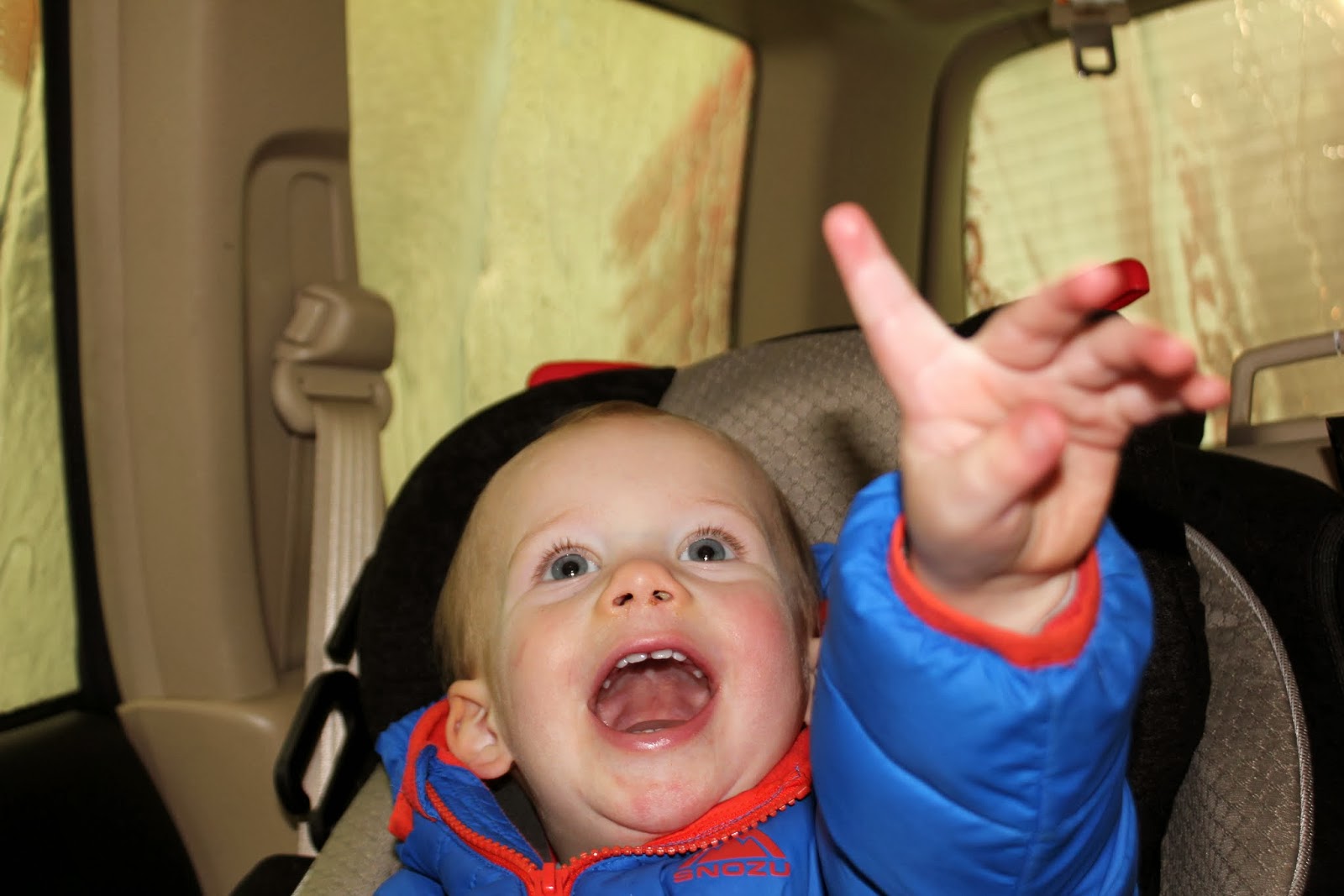 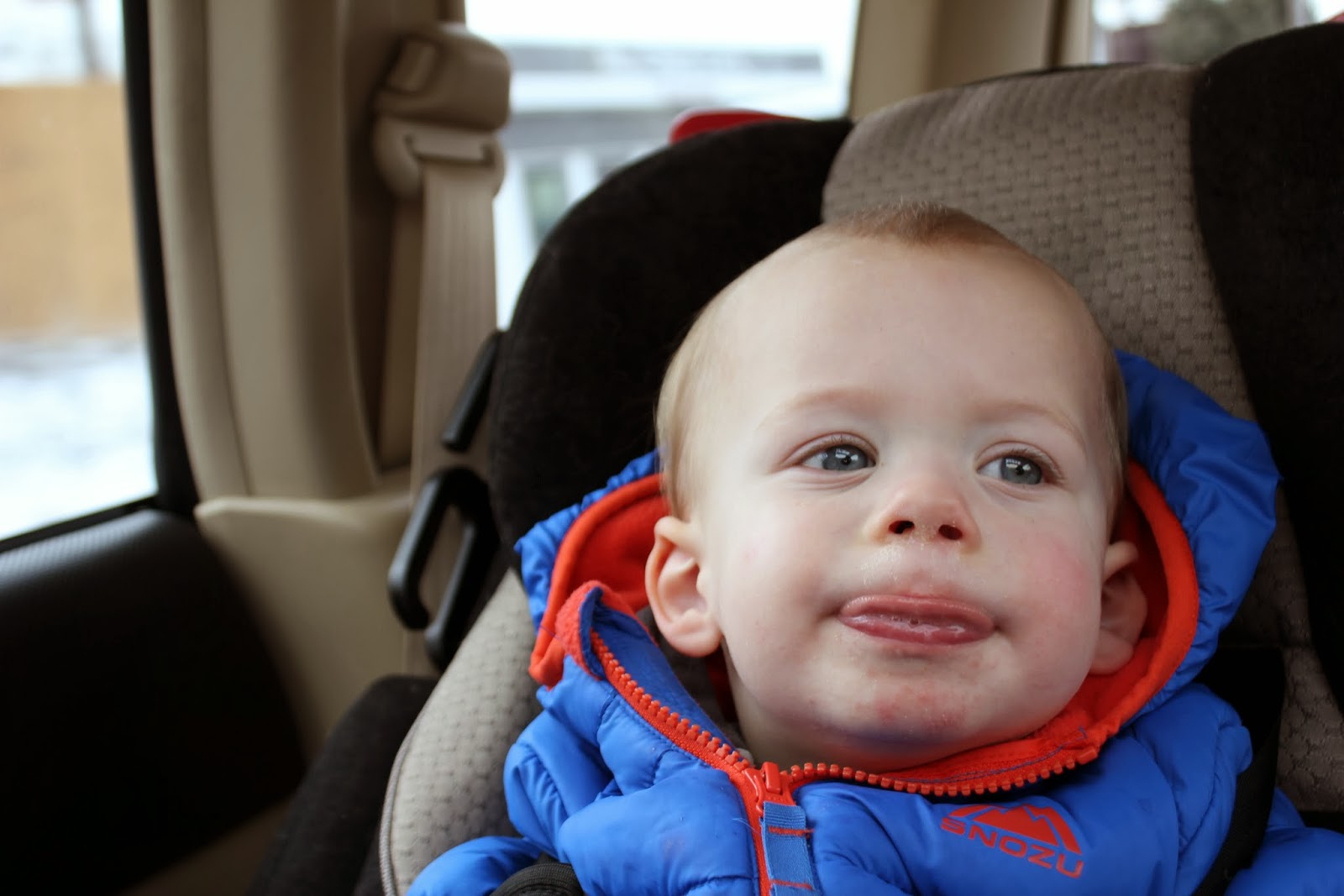 Then during the five minute drive home Luke engages in self amusement via raspberry blowing. 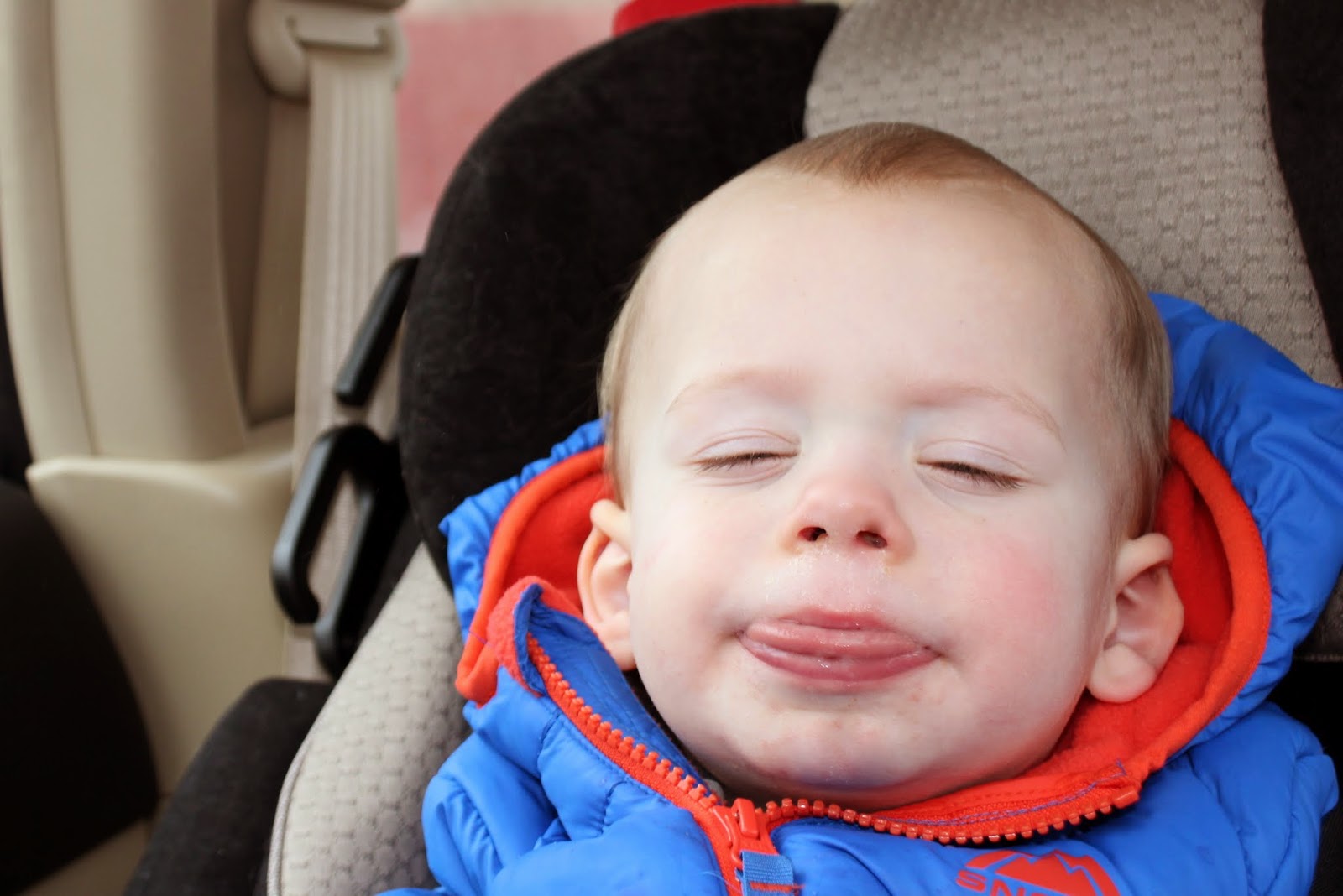 He hasn't blow a raspberry since he was an infant.  I have no clue as to why he resurrected that past time on this ride home. 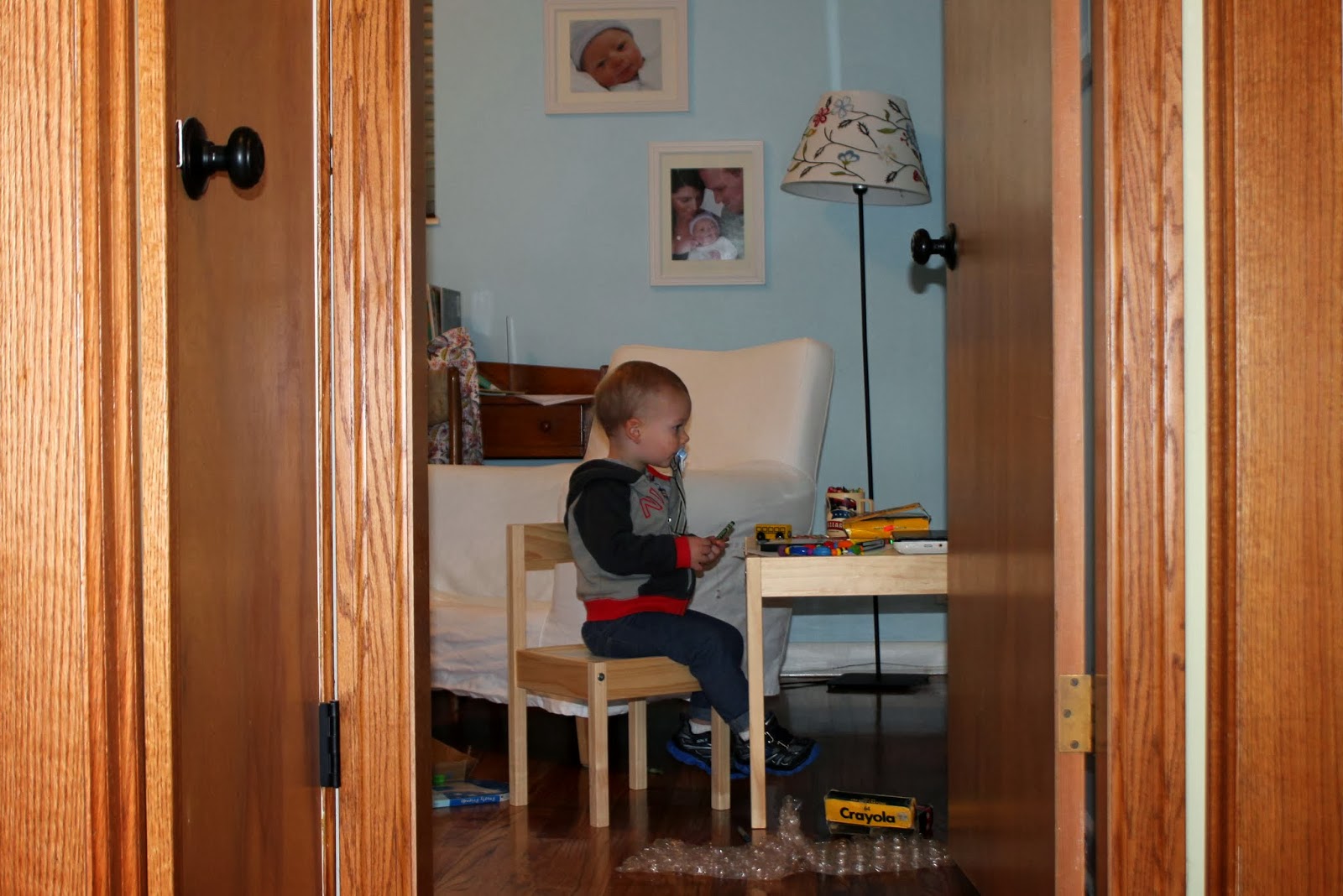 Back home...he heads to the guest room/nursery and does a bit of coloring while watching a Thomas the Tank video. 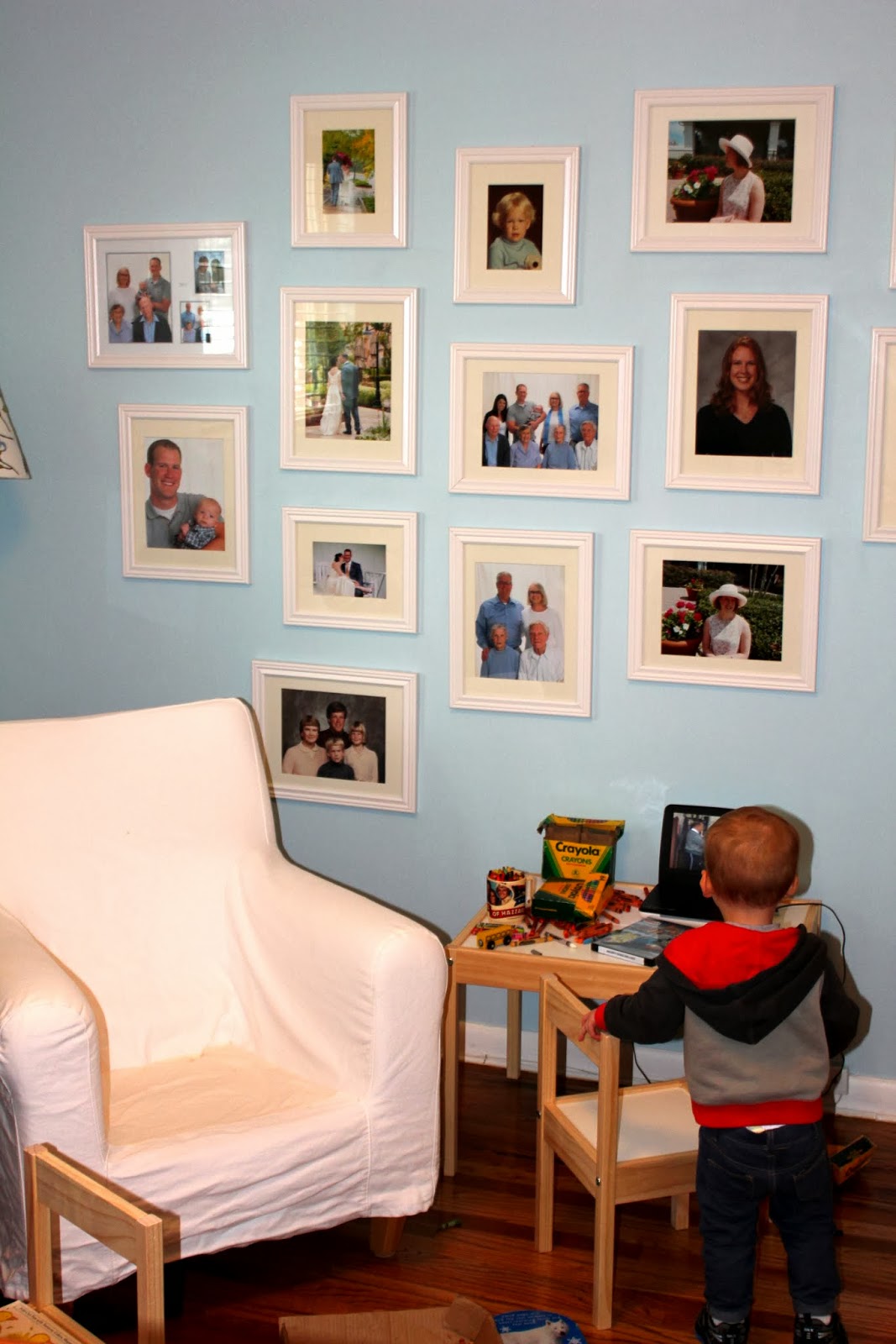 The small table was one of his Christmas gifts from us.
The family photo wall was put up a couple of months ago. 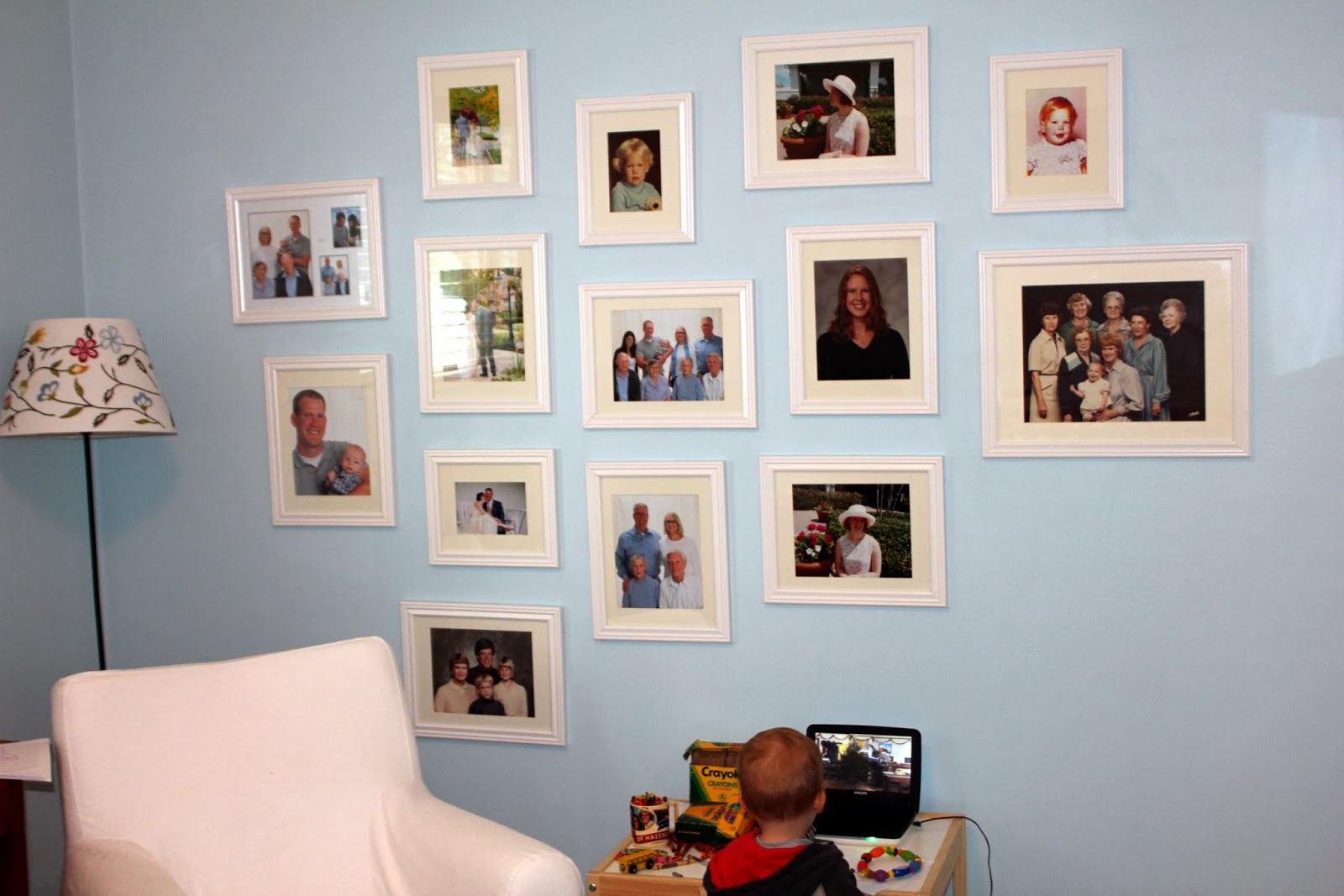 He colors and watches the dvd, occasionally pointing out various family members in the photos on the wall.
After a bit I pull him into my lap, pull off his sneakers and put on his slippers.
He rubs his eyes.
I turn off the lights and put him in the crib,  tucking a train quilt over him.
He smiles and curls up to sleep.
I smile too, amazed that this child doesn't fight going down for a nap.
And so went a few hours of life for almost 60 year old me, 60 year old Bernie and almost 21 month old Luke.
So blissfully blessed are we all.

Posted by Thoughts on Life and Millinery. at 2:56 PM 11 comments: 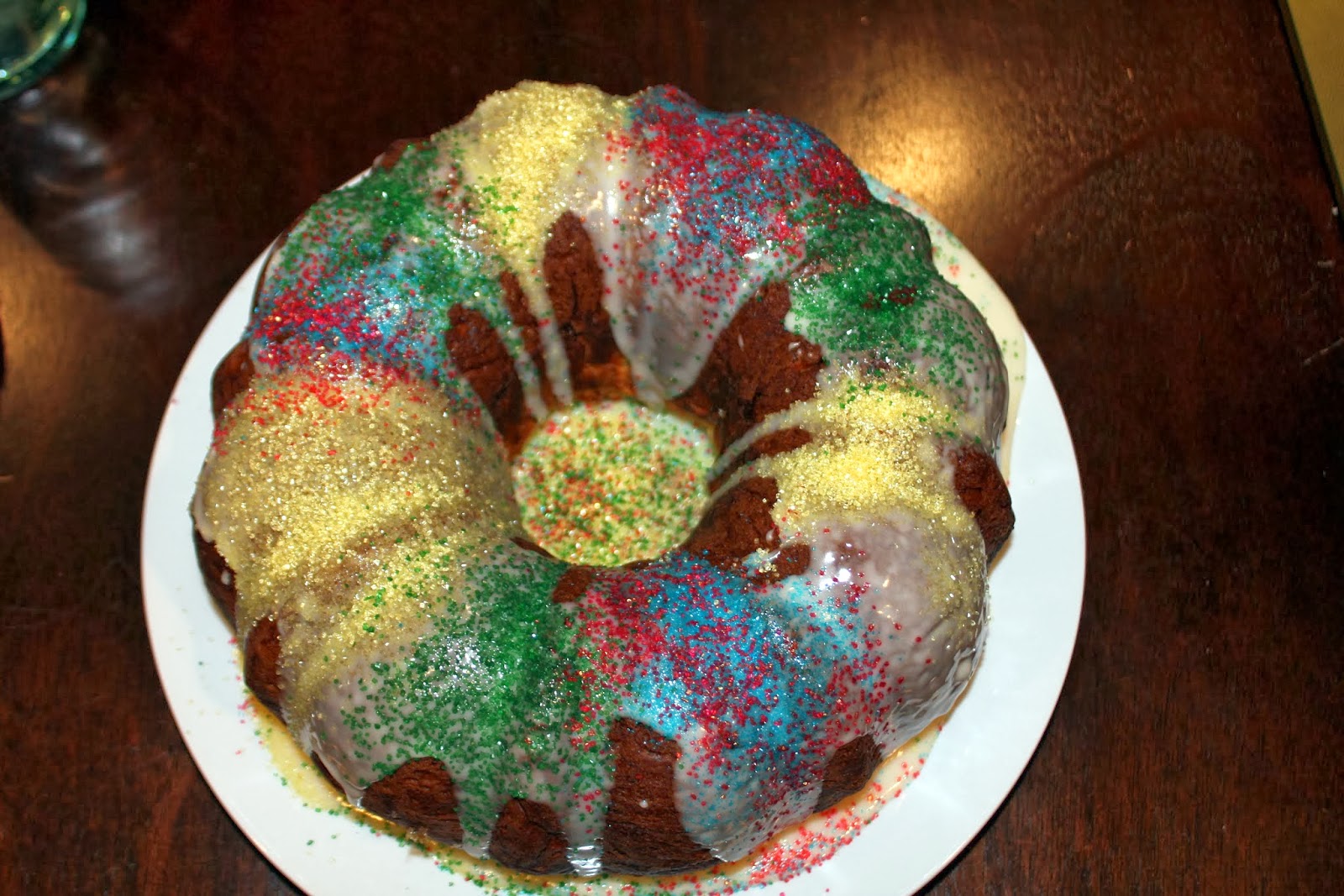 I really, really like the Kings Cake that is found in every supermarket south of the Mason-Dixon line this time of year.
One  year Bernie was in South Carolina during the Epiphany-Ash Wednesday time frame.
He shipped me TWO Kings Cakes, at a shipping cost that was waaaayyyy too much but they were the best tasting thing I think I have ever eaten.
Last year I scored a Kings Cake at the local Mexican grocery; you might recall it was remarkable for having several "Baby Jesus" toys.
As a cake it was OK, but it was not the kind of cake that I crave.
This year I decided to try to bake one myself.
The cake has a cream cheese filling and is quite tasty.
But aside from the "almost" right colors (I didn't have the purple sprinkles that are tradition so I faked it with red/blue combo) the taste just wasn't the same as the store bought cakes either.
Sigh.
Oh well.
It is the thought that counts, right?
The Jewish people say "Next year in Jerusalem" during their Passover celebration.
Around here I think we might start saying "Next year in the South" on Epiphany.
Cuz it just doesn't feel like Epiphany without Southern grocery store Kings Cake.

Posted by Thoughts on Life and Millinery. at 7:42 PM 4 comments: