Doesn't this look like some European spa, perhaps somewhere in the alps?
It sure felt like it was when we were there last weekend.
It was hard to remember we were only a two hours drive from our home! 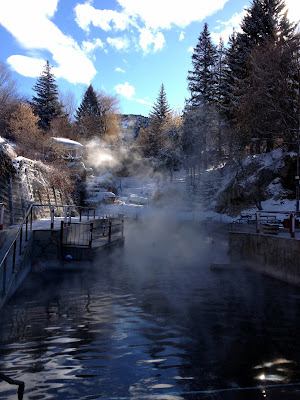 A few years back Bernie and I drove the two hours up to Lava Hot Springs Idaho for a Valentine's Day weekend.
This past weekend we went for another weekend.
Boy did we wonder how we could ever have stayed away for so long.
During our first visit we used an old hotel's private mineral pools; this visit we were encouraged to try the municipal pools.
Oh my goodness.
They were awesome!
There were five hot mineral pools, two with soft gravel bottoms, two with air jets, and each at a different temperature point with spring fed water flowing through them freely. 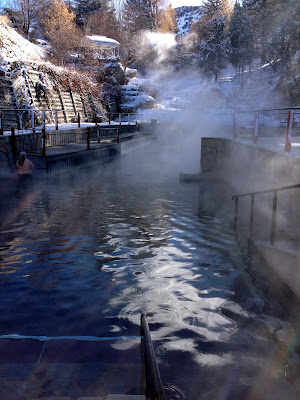 The hottest and most scenic pool was this pool.
When we arrived there was one other person soaking; he was engrossed in a book at the far end of the pool.
With the steam rising around us, for all we could see we could have been all alone. 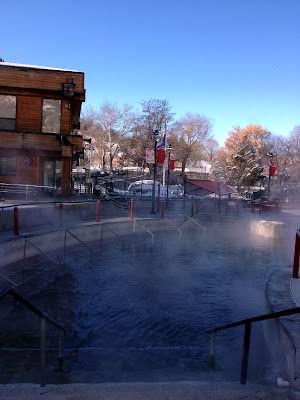 The pool was edged with rock stairs so we could rest in water levels to suit ourselves.
Eventually we decided we needed a slightly cooler pool and shuffled off to this pool. 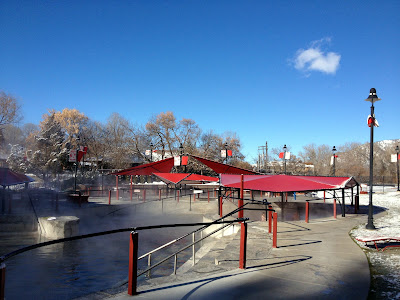 Of course we eventually tried all the pools.
On Saturday the snow was falling heavily with quarter sized flakes sizzling away on our water warmed skin.
We soaked for two hours in the snowfall.
I don't think I have ever been so totally relaxed and blissful in my entire life. 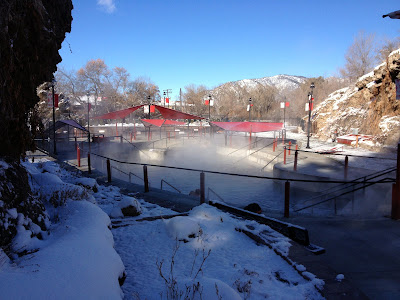 The next day (when I took these pictures) the skies were blue and I appreciated having the option of soaking beneath the red tarp like covers.
No worries about sunburns for me!
I commented to Bernie that as much as I had been longing for some tropical beach time, this actually was even better as I could lounge in the water without needing sunscreen and long sleeved tee shirts to fend off the sun.
Plus no messing with air travel!
We had packed and been out the door and on the road in under an hour.
The sound of the water running, the play of the water reflection on the red tarp, and the surrounding snow covered mountains just did something to me.
My brain quieted.
I relaxed.
There was no need to do anything but breath and enjoy. 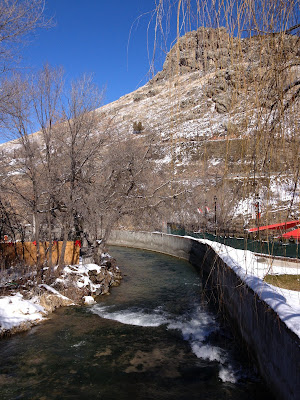 A stream runs next to the pools and through the heart of little downtown Lava Hot Springs.
Downtown being about six blocks long... 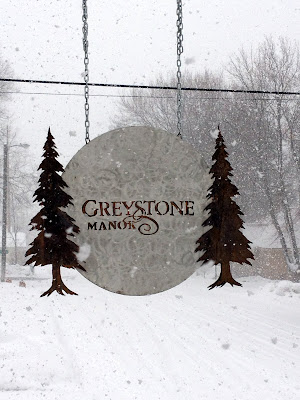 We were staying in a three bedroom house that was a rental available through Graystone Manor, which is where we had our breakfast each day.
The manor proper has five luxurious bedrooms which were booked, but we got to peek inside them before the guests arrived. 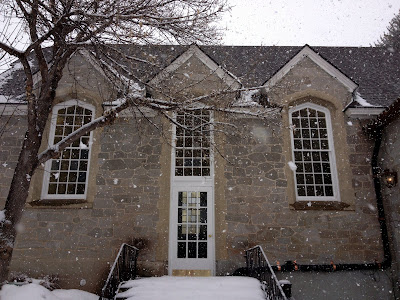 With the snow falling hard, it was easy to imagine we were in some European setting. 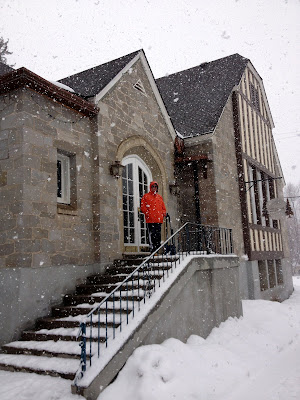 And since the Manor was just across the street from our little house, it was a lovely little walk to breakfast each day. 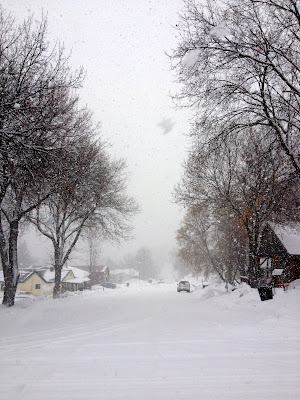 This was looking down the street.
Cute little 1940's bungalows lined the street on each side. 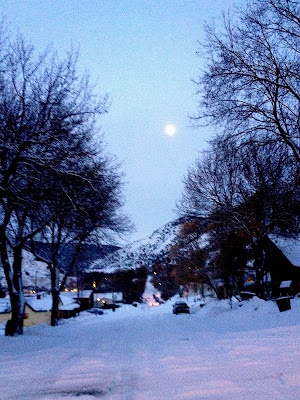 We walked the same path under a full moon on our way to our dinner. 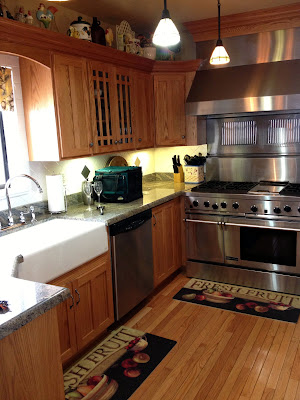 Our bungalow came with a state of the art kitchen.
We later learned that the owner of Graystone Manor had intended to live in the house with her family.
She loves to cook and had the kitchen remodeled to suit her cooking needs; I was more than happy to let her do all the cooking for us up at the Manor for the weekend! 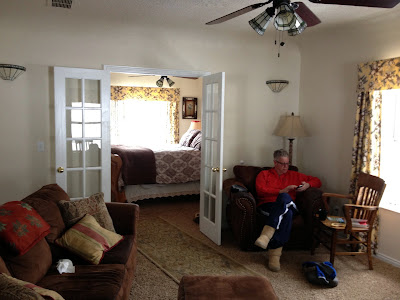 The bungalow could sleep eight, but was just right for the two of us for the weekend.
When we weren't soaking, napping, or eating I was re-reading "The
Best of James Herriot", which was such a perfect books for our snowy weekend getaway. 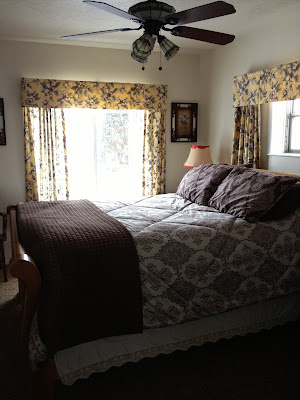 The bed had a wool filled mattress pad.
I had heard how wonderful such a thing was and can now testify that all I had heard is true. 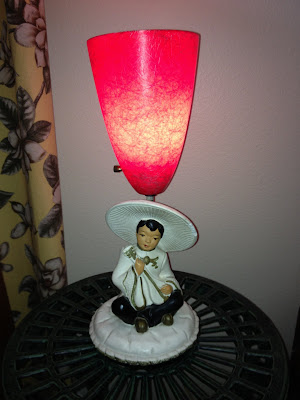 The little 1940's era whimsical lamps and art added to the quaint feeling of the place. 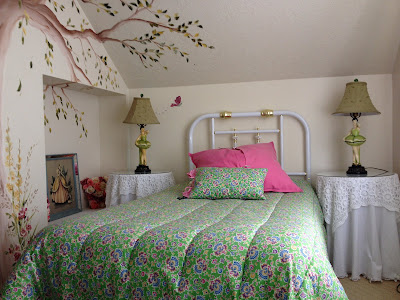 One of the upstairs bedrooms....two beds in there and across the hall was was a boy themed room. 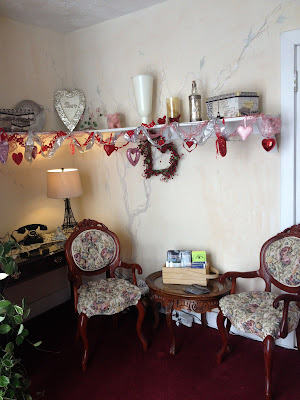 Well, back to Greystone Manor.
Inside the entrance was a Valentines worthy welcome. 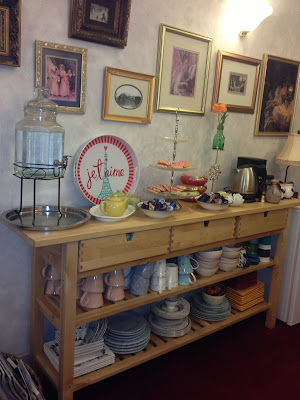 Outside the kitchen were cookies and hot drinks available all day for the guests.
At another table there were six kinds of wine, also available to the guests throughout the day. 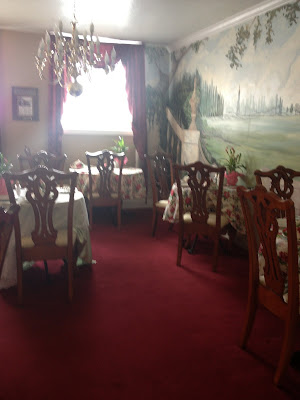 The breakfast and dining room. 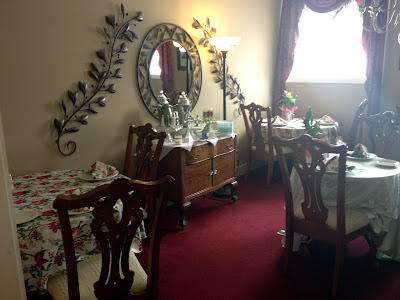 We had the table in the back corner beneath the window. 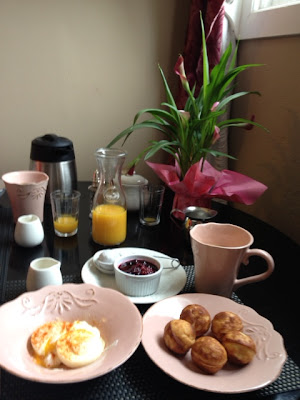 Breakfast on Saturday, with Danish Aebleskivers. 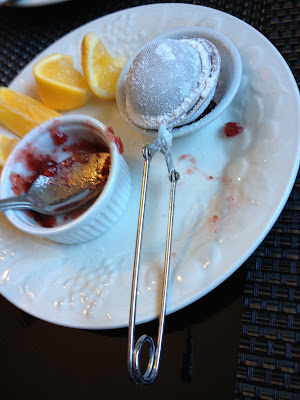 Thought this was a great idea to use individual tea strainers for powder sugar!
That night we had a lovely four course meal and the next morning we were served
Dutch pancakes, or what I had always called Deutch Babies.
The food was delicious, and Vicky, the owner and head cook was so delightful!
What a go-getter she is, with a full time job with an hour commute each way, and also owning/managing the Manor flawlessly.
She told us the building's history:  It was an abandoned church building and when she bought it it had suffered from years of neglect.
Now it is a lovely inn and also has a non-denominational chapel for wedding and room for a good sized reception too.
To see more about Greystone Manor visit HERE.
There is a side link to Vacation rentals; we stayed at the Lyon House. 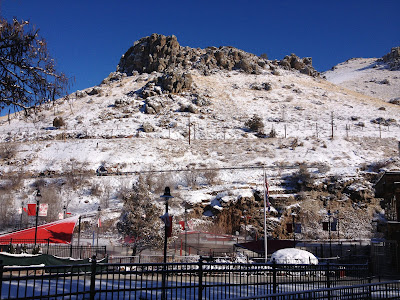 Five inches of snow fell on Saturday, by noon on Sunday most of it had already melted away.
We promised ourselves to come here more often, and definitely to come in all four seasons.
I confess, I looked at some real estate listings while we were in town.
The thought of living two blocks from the pools, in a little bungalow with a library just a block away sounded mighty appealing to me.
At the other end of town there is a water park with huge water slides, high diving boards and play features that any grandchild would enjoy.
There was also a very active senior center and workout center, several churches, campgrounds nearby and a university just thirty miles away.
Hmmmm....
It is a very relaxed place to live, according to Vicky.
People walk to the pools in their bathrobes, and according to her, no one raised an eyebrow when parishioners show up in their bathrobes for Mass.
The pools open at nine and stay open until 10 at night.
Above the pools is a mountain peak that has a lit letter "L" glowing in the dark. 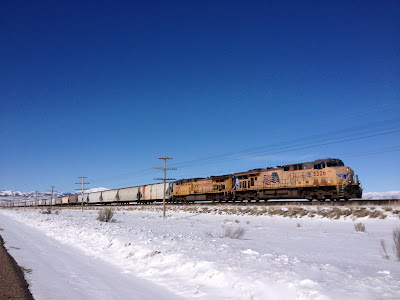 The gentle sounds of passing trains in the distance added to the sweet home feeling of the town.
It was hard to pull ourselves away when it was finally time to head home Sunday afternoon.
A "Brigadoom" like feeling haunted  me; was this place for real?
Would it always be as relaxing as it has been the two times we have visited?
I plan to find out.
Two hours is not that far to drive after all.
For a weekend, or even for a day!
Posted by Thoughts on Life and Millinery. at 2:59 PM 9 comments: