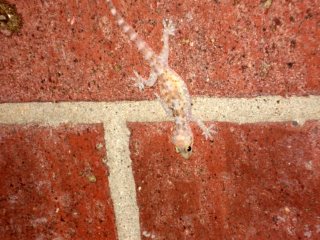 The first day of summer zipped by without acknowledgement here at Jill's World. I have a good excuse: B. had surgery that day.
A Transureathral Resection of Prostate.
AKA: a "TURP".

Google it for all the details!

RN daughter Laura assured us it was "not a big deal...just really uncomfortable for the first day, then it gets better".

She herself had previously chosen to spend the first day of summer traveling to SF, and on to Boston, with an old friend. Goal: To continue checking off states she has visited. I believe she is closing in on 50.

I figured it was not going to be too bad. And it actually wasn't, unless you count the part where the Doctor forgot to write orders for a med pump, leaving B. fresh out of surgery with nothing more than two Vicodine tablets to relieve pain. The Doctor had finished the surgery and headed out for a two hour lunch, while B. sweated and gritted his teeth in pain.
Pain IS optional. That is why during the pre-op appointment B. went over the fact that he wanted a med pump, to self deliver pain killers every ten minutes, instead of having tablets, which would show up when the nurse had the time. Tablets are what you take if you want the pain option. Med pump is what you want if you wish to opt OUT of the pain.

Several of us in the family have had enough surgery to know what it is like waiting in pain for a tablet, and waiting another 30 minutes for the tablet to take effect. It is NOT the way to manage pain.
The doctor readily agreed to a med pump.

Grrrrr....... Doctors: They readeth not, neither do they write, apparently.

This doctor, who we actually like, later passed blame: oh the nurses didn't get it right.
Since I stood with the nurse as she called to pharmacy to try to get the "promised" meds, I happen to know it wasn't the nurse's fault.
Plus I happen to know ****for a fact*** that nurses are not allowed to write prescriptions.
Only doctors can do that.
Then he blamed pharmacy for taking so long.
Yeah, they did take another two hours once the prescription was written. B. had almost five hours of pain with nothing more than what I am usually given for dental surgery, and I am much smaller than B.

I repeat:
Doctors: They readeth not, neither do they write.

Speaking of dentist: My last visit to a dentist (one that I really, really like), the dentist shot meds into me that caused a reaction. Since I have told him of the effects epinephrine has on me (I shake, cry, my slow heart quadruples in rate, and I am wasted the rest of the day), he usually is excellent at working quickly on me to complete the work before I loose numbness.

This last visit, he shot "epi" into me as we were chatting, and I felt it hit. I immediately said "did you give me epi?" and started the meltdown. And he felt so bad. Apologized profusely.

But also said I should have reminded him.
Really!
OK then. I surely will remind him next time. Or is that "surly" will?

I imagine saying next visit:
"Doc. R., I know that this fact is in my chart, but since I am now aware that you are a functional illiterate, and are either unable or unwilling to READ my chart, (causing me to presume that using "Books on Tape" can now lead to a doctorate of dentistry) , I just want to remind you: NO EPINEPHRINE!"

Or words to that effect...

B. had two nights at the hospital. We watched a massive storm come in from the room on the fifth floor, quite a view. And I stayed with him, to help, and I stitched. See "In the Pink" below.

B. is home now, and just a bit sore. Tiggie is with him, and in classic cat psychic fashion, has gently layed his paw on B.'s lower abdomen several times, and looked at B. with questioning eyes as only a cat can do.

The gecko? He and his friends are now hanging out on the walls of our front porch at night, eating bugs, and reminding us that summer has truly arrived.

Millinery: In the Pink 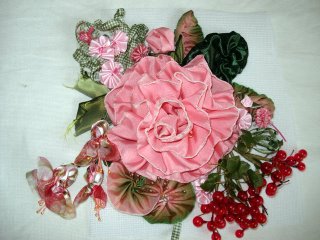 Two full days of stitching. First time I've made fuschias and this style of rose.
My left arm got sore from the work!
I just got a "hankering" (a word I heard an old Texan use today) to work in pink. The vintage glass berries were found in Rice Village Universal Fabric store. They are like the berries on one of the hats my Mom wore when I growing up...I loved the quiet jingle sound the berries used to make. I still have a way to go, plus block a straw hat. Must decide color before I order the blank hat body~pink, rose, berry, ice?
And make more filler leaves and stuff. 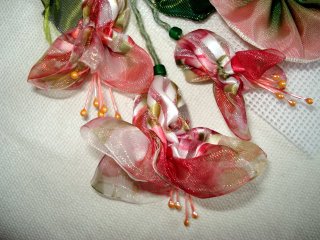 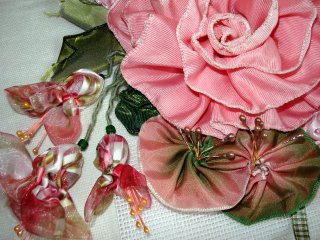 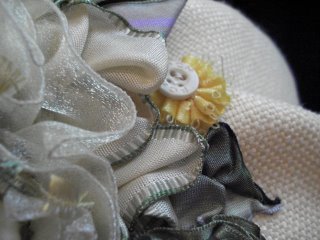 Daphne style hat, yellow linen. Created for Gayle, to coordinate with the outfit shown on her. 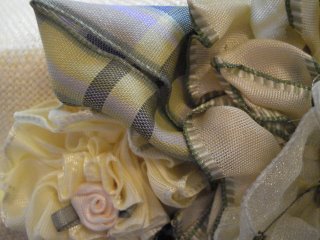 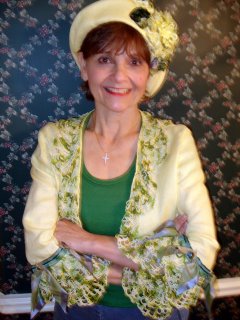 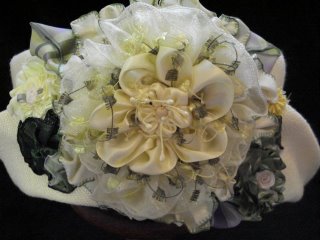 Posted by Anonymous at 10:03 AM No comments: 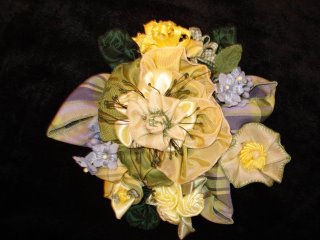 This is the piece Gayle and I collaborated on while listening to music, talking and watching the rain.
It is about six inches in diameter. 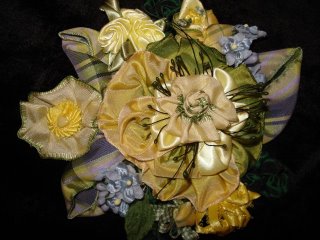 Posted by Anonymous at 9:34 AM No comments:

I am so glad to have my computer back. That old human need hierarchy of food, shelter, sex, well, add an internet connection to my needs.

Or as Bernie put it: "Are you a little cranky because of internet withdrawal?"

So, I am much happier now!

To catch up on stuff: Yeah, Houston got clocked, and will probably get some more rain today. The dry stream bed in the garden is puddled, and the sun is streaming through the trees, making the garden look rather magical. It is sunny out, which I am told will cause more rain later... blah blah blah....Locals on the 8's.

I wonder how many people know what that expression means?

I've watched enough meteorology since coming to Texas that I should have course work credit just from listening to Dr. Greg Forbes.

I stayed up till almost 3 AM last night, because I was having so much fun with Picasa. It is a Google based program that lets me edit, enhance and organize my pictures, and make folders and slideshows. I wish I could put my all cat slide show here. And my millinery slide show. There may be a way to do that...I am still learning,

The Great News is that my friend said her doctor agreed with Laura...the cancer is small, and they are not even sure what exactly it is, but will just watch it for 3 months. PTL! My friend thinks Laura should just get the PHD after her name for this. It is ~lovely~ having someone in the family who knows the inside story on medical stuff!

I was supposed to go to Dallas last weekend to see a woman's hat collection. She collects from mid 1800 to early 1900's and was to show us (Houston Hat Net and Dallas Hat Band) her private collection at a tea.

But, on Saturday morning, hail and sever storms threatened.

So Gayle and I hunkered down and made millinery trim, and listened to Messianic music while it rained. Is there anything nicer than a day with a friend when your plans got cancelled, so you aren't scheduled to do anything at all???? Like an oasis in the rush of life. See the pictures in the next entry above.

1: Another blog has published a picture of my Midnight Sun hat! Wow. How random is that!

2. And I am loving this blog: http://www.dressaday.com/dressaday.html

I am laughing out loud at her writing and loving her collection of dresses. She publishes a dress every day, usually from the 1950's. I stole her line from today:

"Oh, it's not all puppies and popsicles here at A Dress A Day headquarters. Not everything that rolls off the assembly line gets worn, or even looked at without a shudder".

This, with a photo of a really awful attempt at a dress, a sewing calamity.

I hope someone make a real book out of her blog!
Posted by Anonymous at 9:17 AM 1 comment: 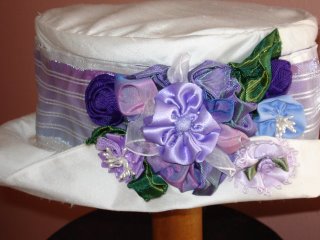 The hat I designed under the inspiration of my friend Apple's daughter's nuptuals.

I want to redo the hat frame, but I love the flowers! 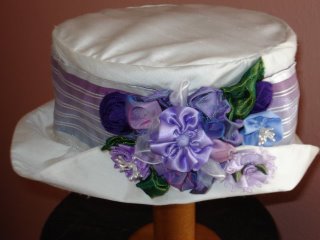 Posted by Anonymous at 3:28 PM No comments:

A few more flowers, in a brooch 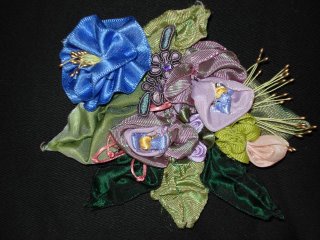 Posted by Anonymous at 3:26 PM No comments: 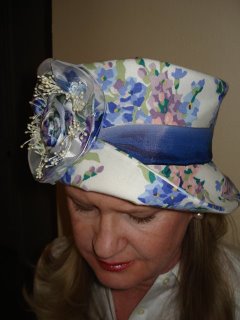 A quick post: Houston is flooded, B. called me from Chicago to let me know this! All is fine in Kingwood.

The hat pictured is again using the Daphne pattern, and the three minute rose...

And hurray...I'm back on MY computer, but only for a minute before I head for work! 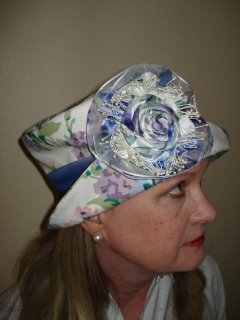 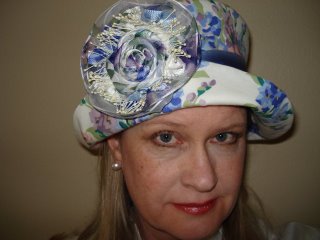 Posted by Anonymous at 3:23 PM No comments: