Who is afraid of dinosaurs? It had been exactly two years since Luke was first introduced to the roaring dinosaur at the Salt Lake Natural History museum. 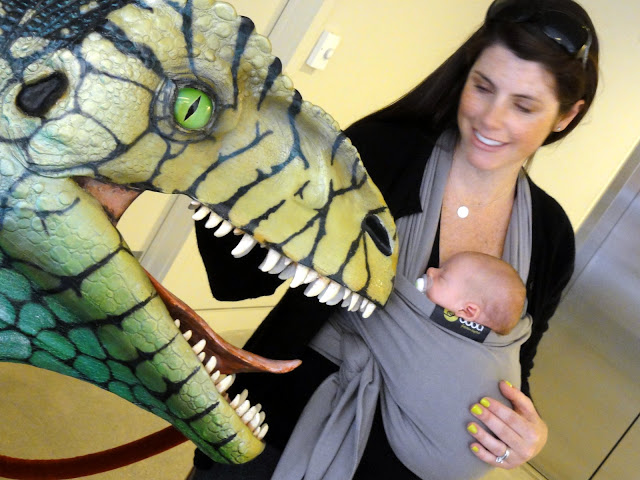 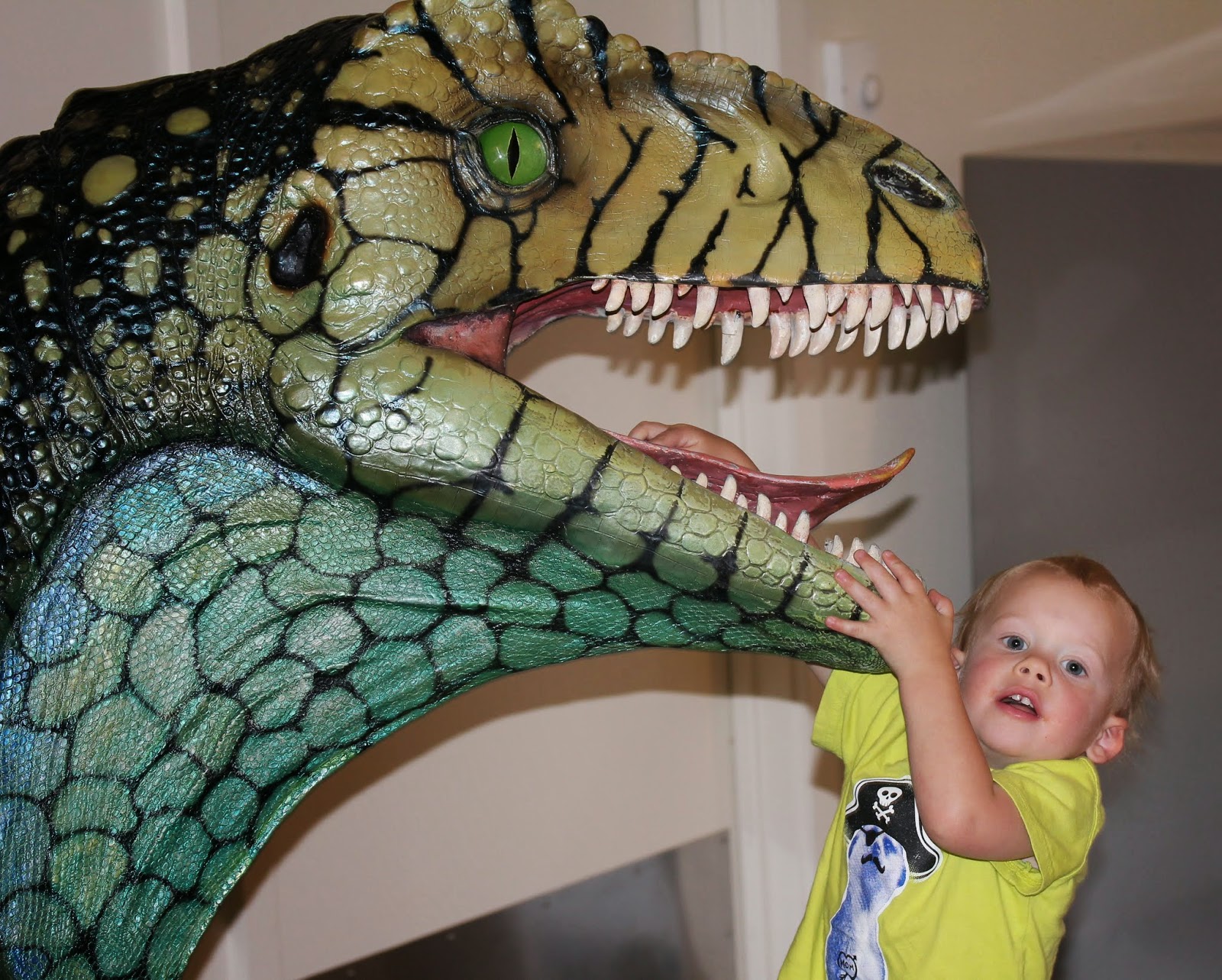 Bring it on Big Guy! 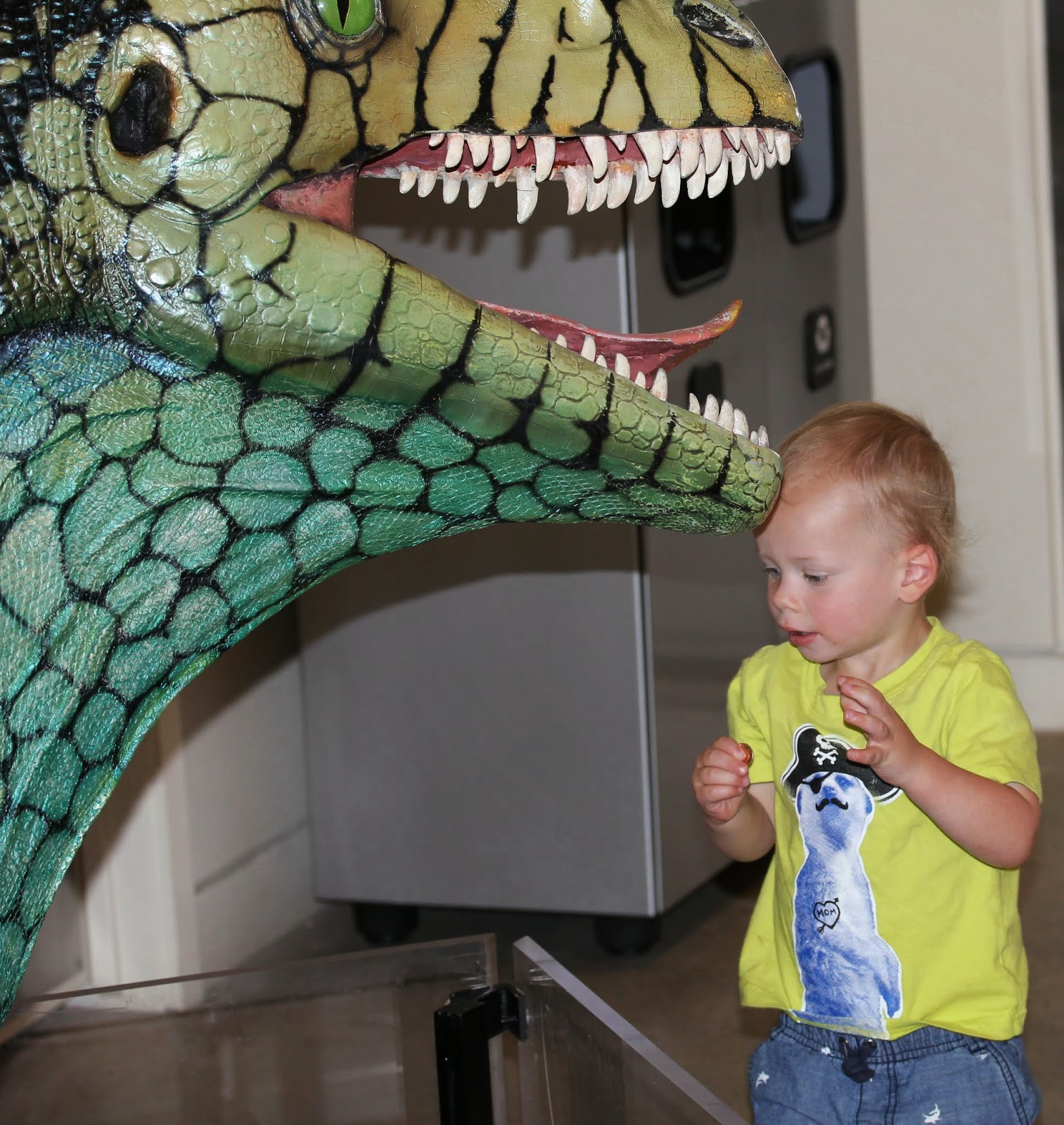 The dinosaur is actually a donation collecting device.
Kids can stick a coin deep into the dinosaurs throat and be rewarded with dinosaur conversation that sounds rather scary to me. 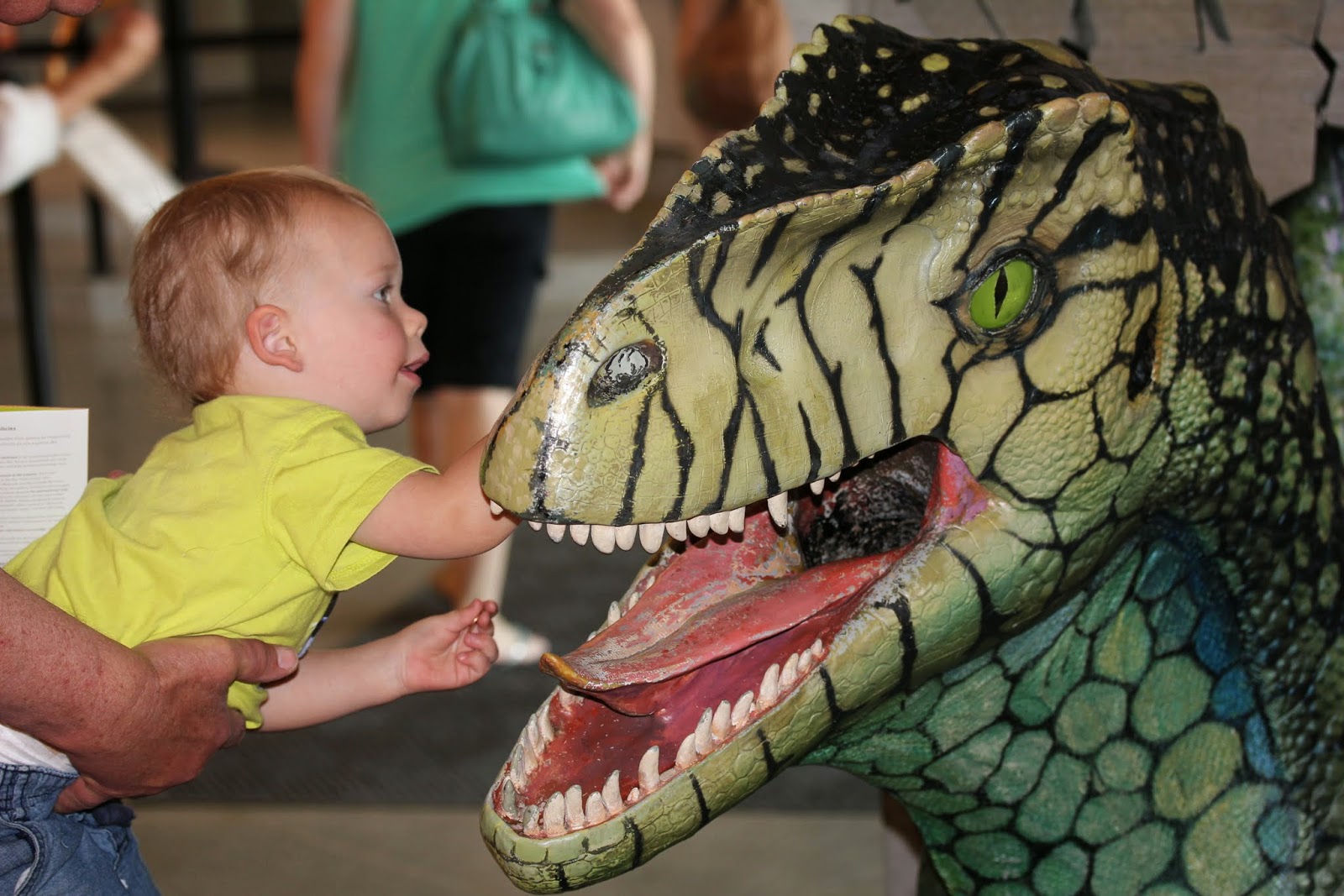 I am pretty sure that I would not have agreed to part with my coin or put my hand deep into a roaring dinosaurs mouth as a kid but Luke was totally game for this. 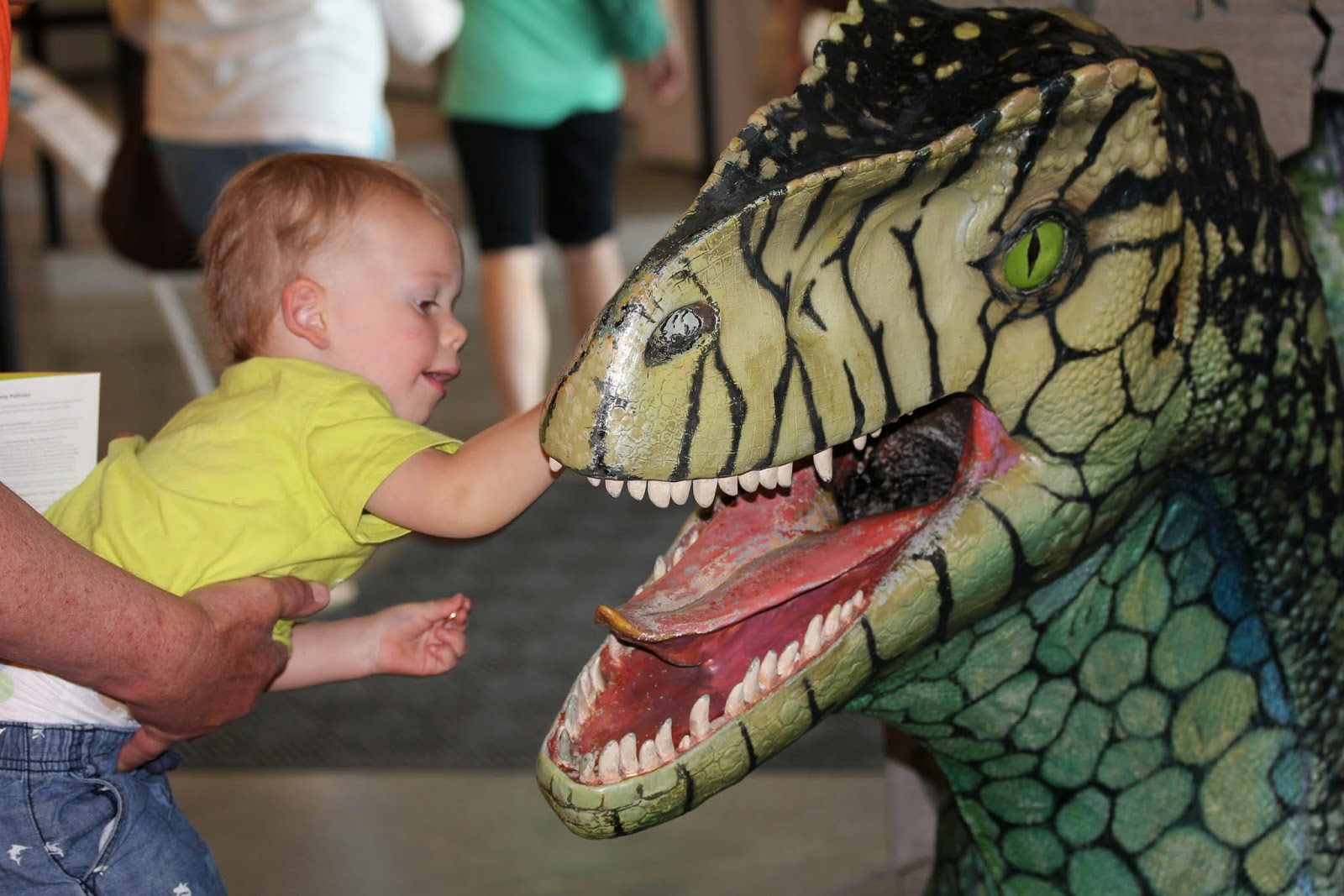 He even smiled while he did it. 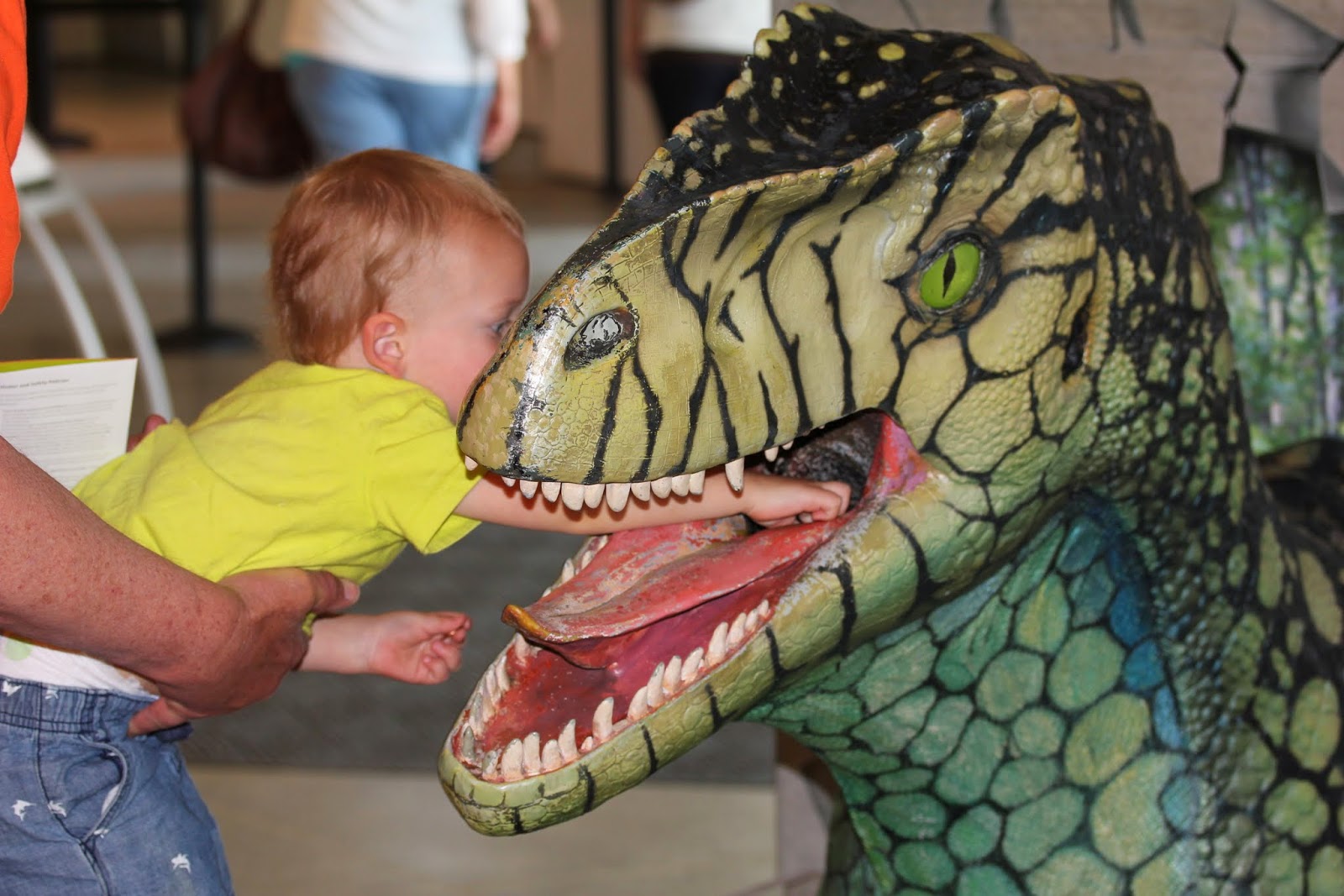 Good thing I had thought to grab a fistful of loose change before we went to the museum.
Feeding the dinosaur was a "Do it again!" kind of activity. 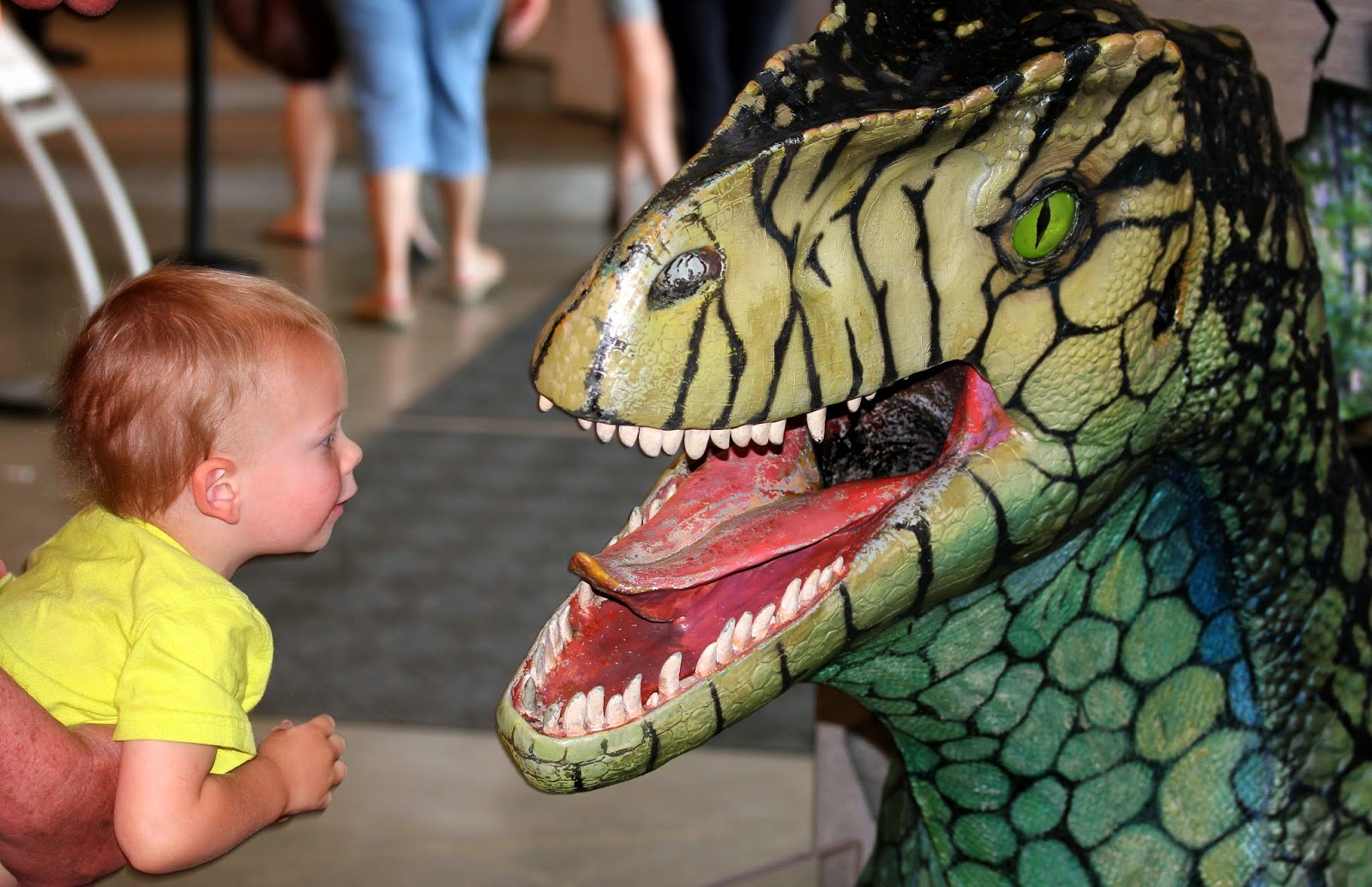 Like most two year olds, "again!" can mean many, many "agains". 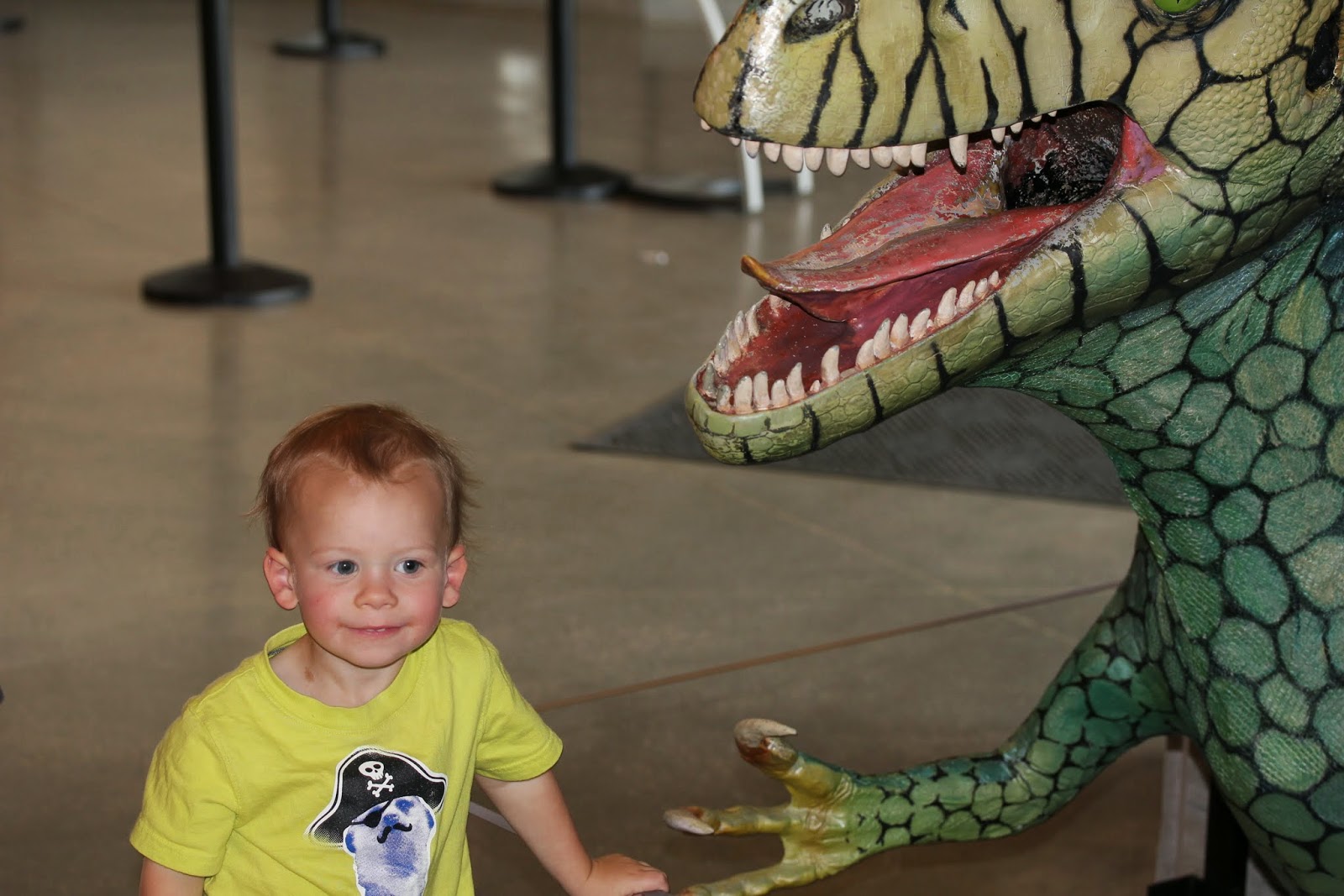 Well the money goes for a good cause and the money contributed will probably total out at a lot less money than other good causes that we will likely be tapped for over Luke's growing up years. 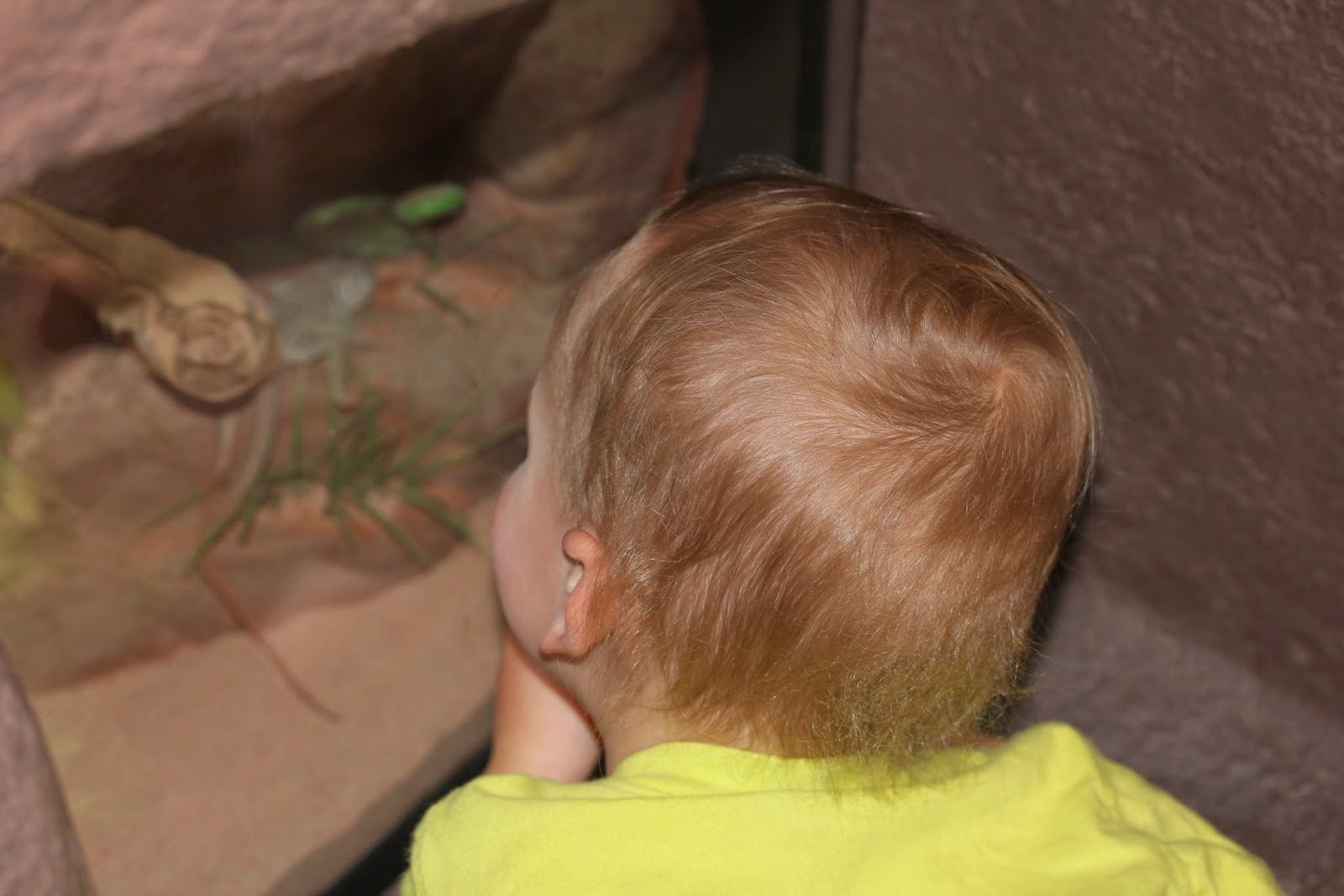 Eventually we moved on to other museum areas.
He and his reptile loving Papa enjoyed seeing live lizards up close. 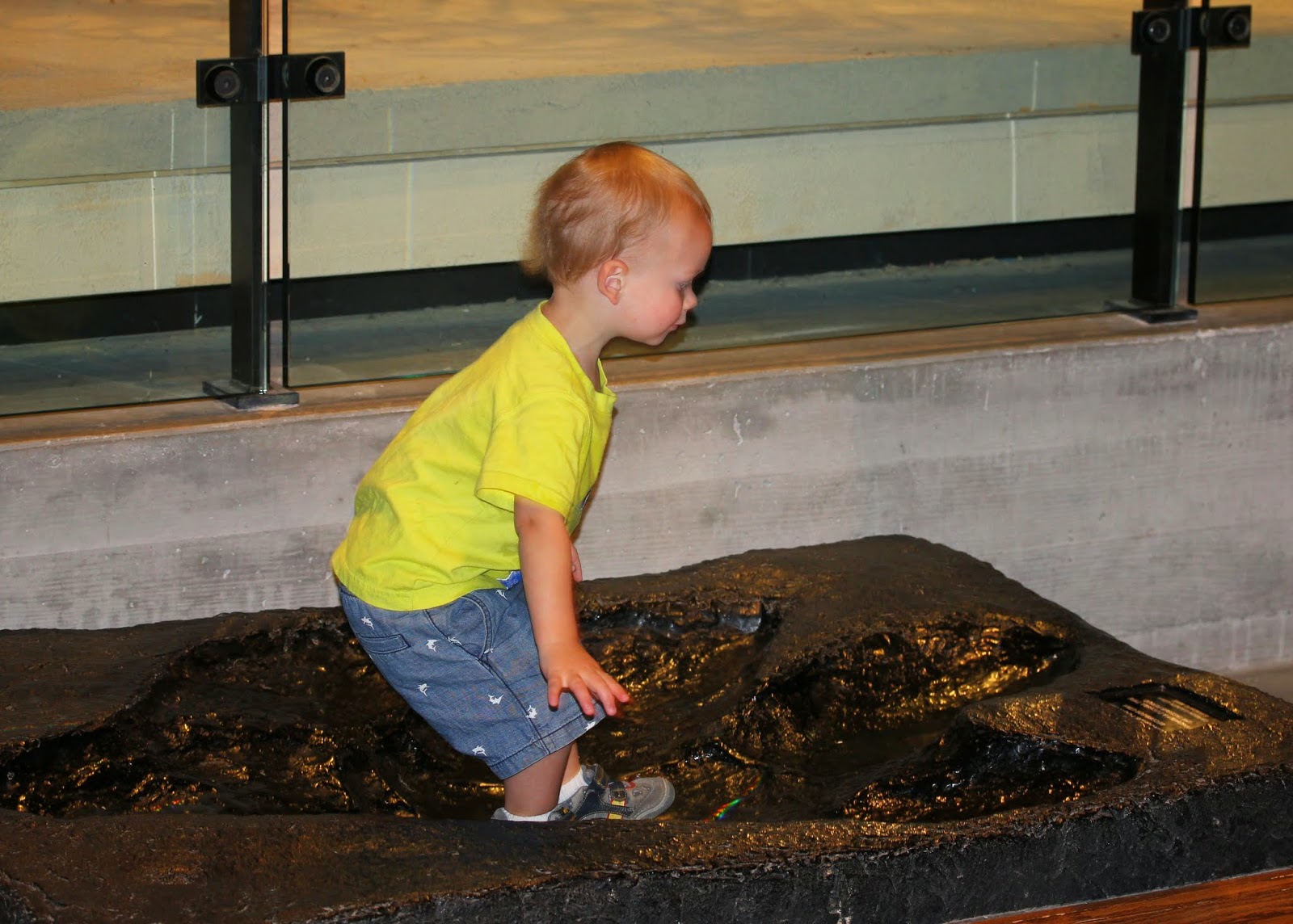 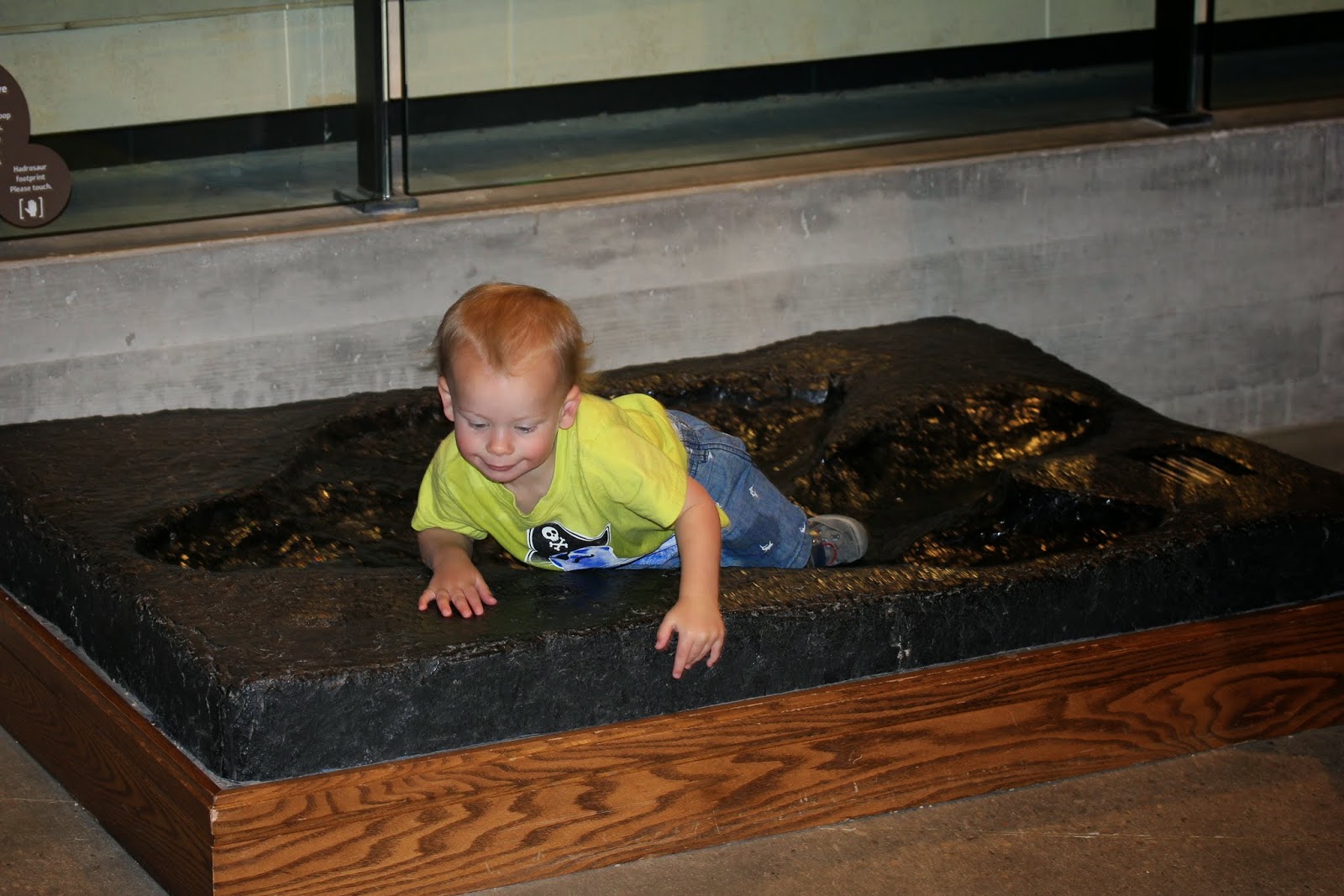 Yup, a dinosaur could pretty much step on and squish a two year old human.
Wouldn't a dinosaur track mold make a great water play feature in one's back yard?
I think so....wonder why no one is making and selling such a thing. 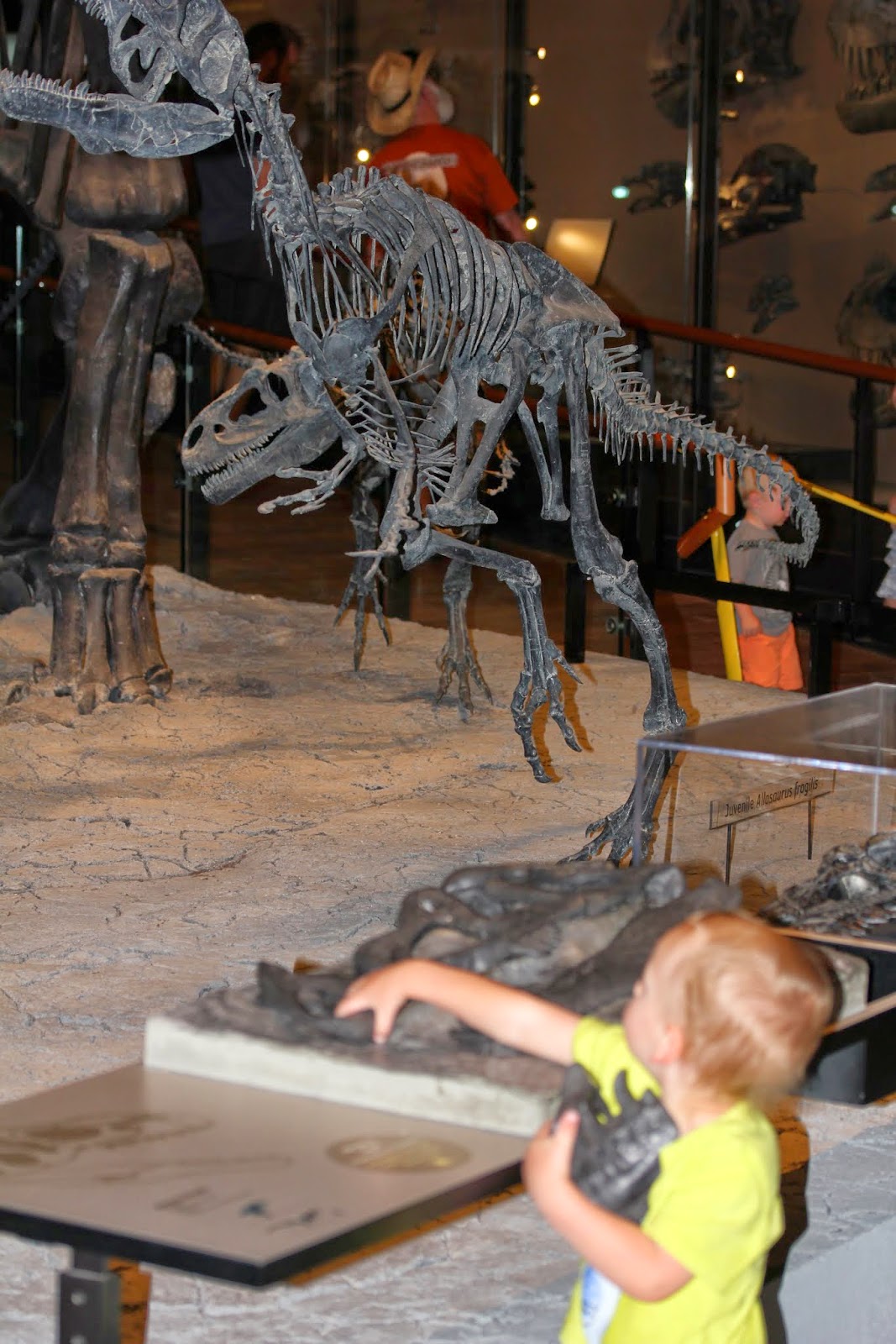 Frankly I think dinosaur bones are creepy.
The kids are welcomed to pick up replicas of the various bones.
They are also allowed to occasionally have over night camps in the museum.
Yish.
Count me out! 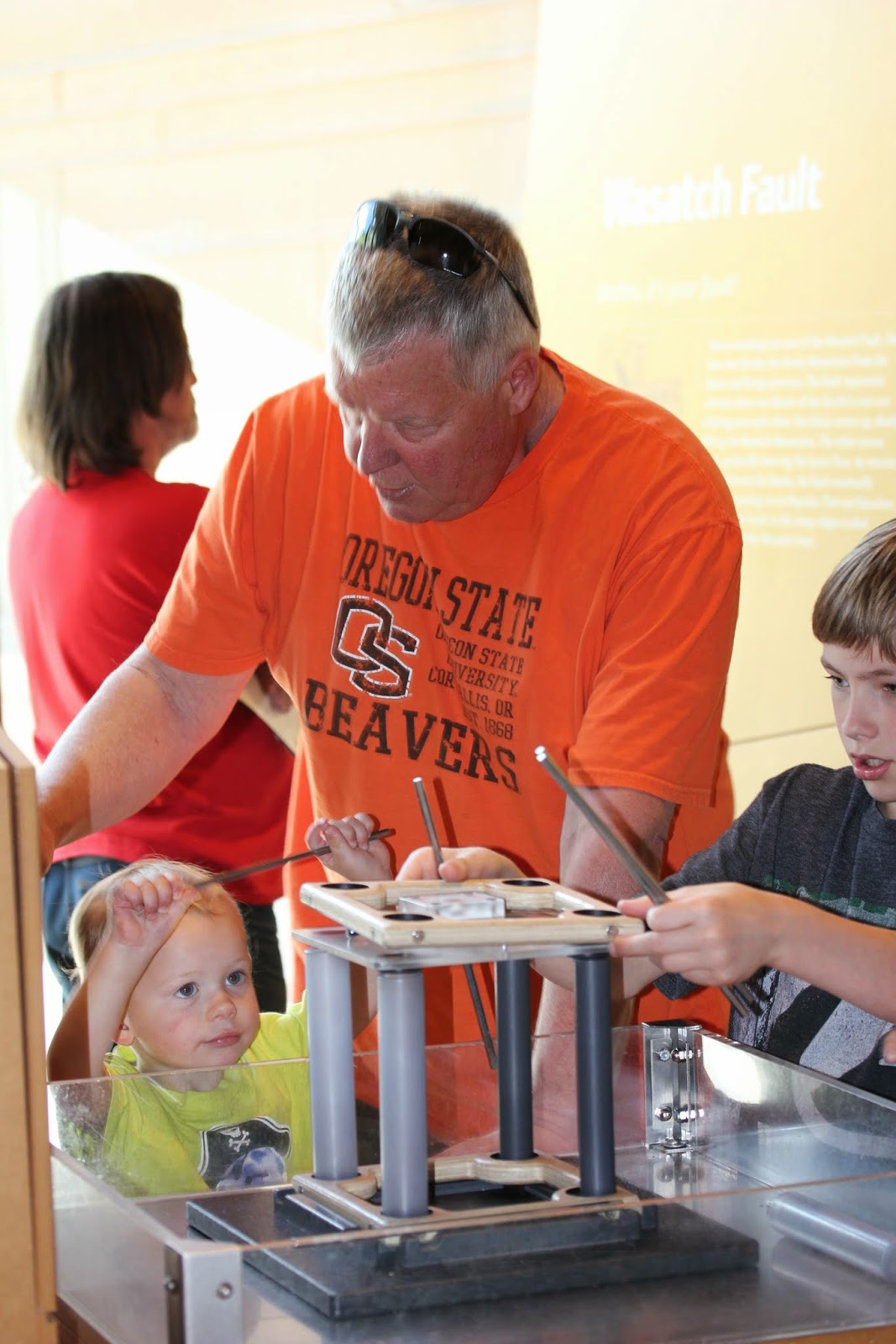 A different kind of creepy:
Visitors are allowed to attempt to build an earthquake proof structure.
Bernie dug right into the project using his engineering skills.
I think his structure held up to about a 6 level shake. 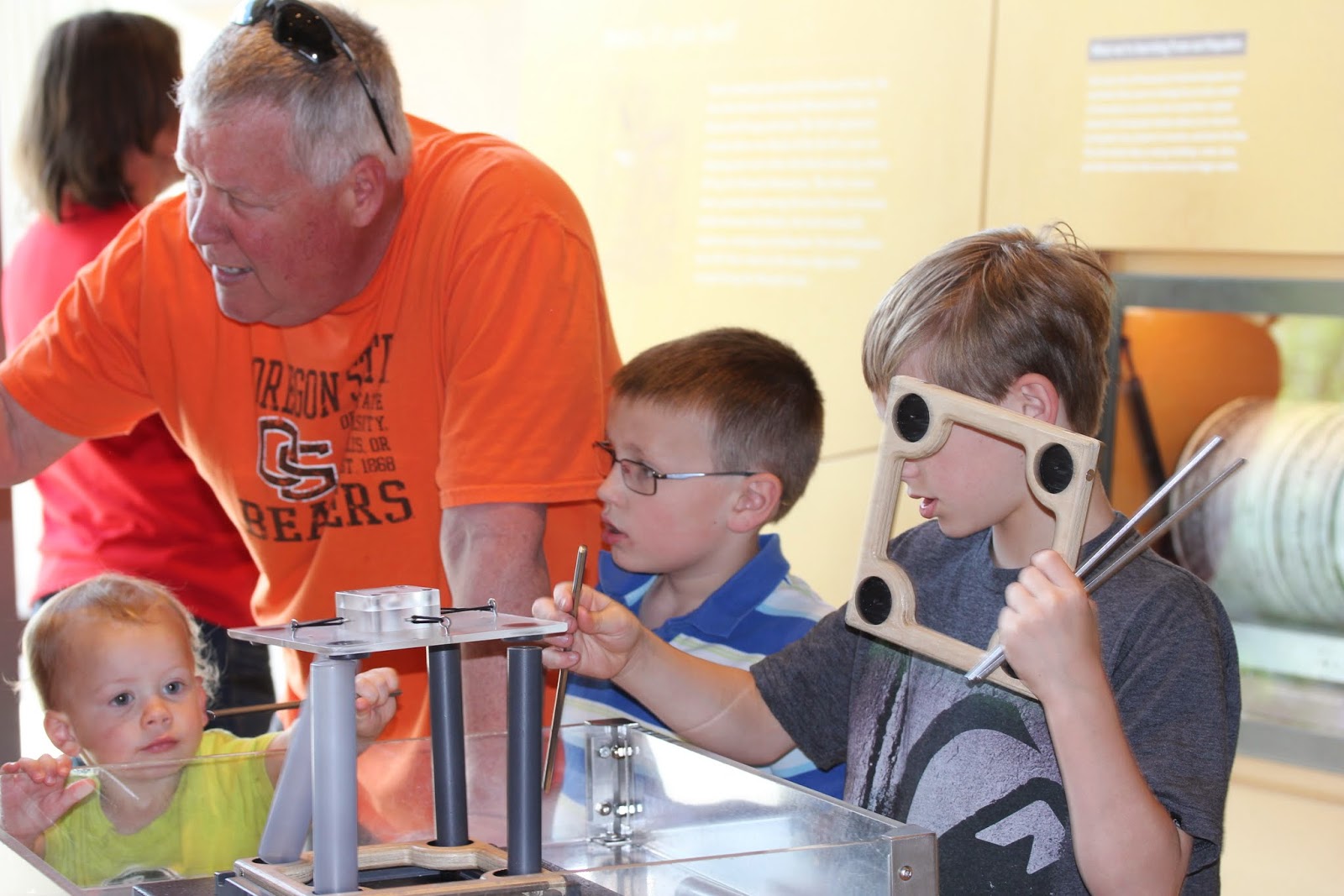 After his structure collapsed a bunch of boys raced over to watch and try their hand at building something.
I thought it was cute: Boys ages 2 to 60 all playing building blocks together.
The museum had four floors to explore.
We had to agree with what we heard other adults say:
"We have GOT to come back here without the kids sometime. There is just so much to see!"
On the other hand....seeing a young one see stuff for the first time is pretty great too.
I think we will be seeing the museum both ways over the years to come.
Posted by Thoughts on Life and Millinery. at 12:35 PM 5 comments: