I thought the POTUS was the Servant of the People.... 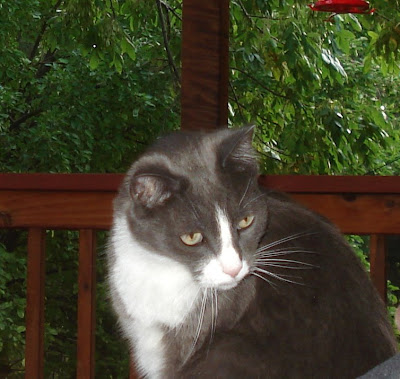 You ARE paying attention, aren't you?
Check out these headlines!

from: http://www.politico.com/blogs/bensmith/0809/We_are_Gods_partners_in_matters_of_life_and_death.html?showall
'We are God's partners in matters of life and death'
A reader points out that President Obama's call with the rabbis today — as recorded in Rabbi Jack Moline's and other clerics' Twitter feeds — freights health care reform with a great deal of religious meaning, and veers into the blend of policy and faith that outraged liberals in the last administration.
"We are God's partners in matters of life and death," Obama said, according to Moline (paging Sarah Palin...), quoting from the Rosh Hashanah prayer that says that in the holiday period, it is decided "who shall live and who shall die."
The president ended the call by wishing the rabbis "shanah tovah," or happy new year — in reference to the High Holidays (that should be spelled "Holy Days"! jill) a month from now.

My favorite comments so far:

"Problem is, Mr. Obama thinks he is the senior partner."

"Newsflash: God doesn't need a partner....but thanks for exalting yourself, Obama!"

"Now that is compromise we can believe in.. Obama is actually willing to share the spotlight with GOD!?!?!?"

"We aren't God's partners you arrogant twit. We are dust specks. You are a narcissistic dust speck."

"Sorry Barack, this is a family-owned business." - God

"I believe, Mr. President, with all due respect, sir, that God's partners in life and death are the God, the Father, His Son, and the Holy Spirit. He doesn't have any vacancies right now due to the recession!!!!!"

"The more our President speaks, the more wary I become. Last time I checked, God wasn't looking for volunteers to help Him make decisions."

"He has that president thingy down. Promotion time!"

"If an ordinary citizen went about seriously proclaiming himself to be God’s partner, we would consider having him committed to a mental institution for observation."

"Partners???? I thought God worked for him. Did God get a promotion?"

"Oh man. I wouldn't want to stand near him in a thunder storm."

"Don't assume the god he speaks of partnering with is the one of the Bible. There are many gods, but one I AM."

"Just so you know, the act of "attributing partners to God", is one of the most serious sins in Islam. This quote will be shouted from the minbar all across the Muslim world tomorrow at Friday prayers. "

"This is waaaayyyy above Mr. Obama's pay grade. "

Step down, Barry...step down NOW!

Posted by Thoughts on Life and Millinery. at 10:12 AM 3 comments:

Before and After: The Hat Room 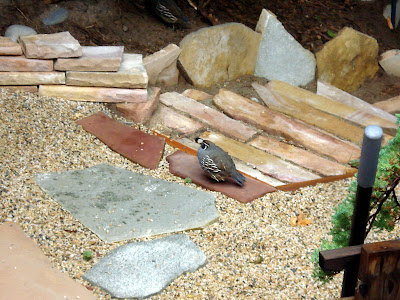 Before we get into the "before" and "after" shots...I have to show the adorable California quail families that have been dropping by every morning and evening the last couple of weeks.

Here's a Daddy Quail, in the bonsai garden area. Isn't he handsome? 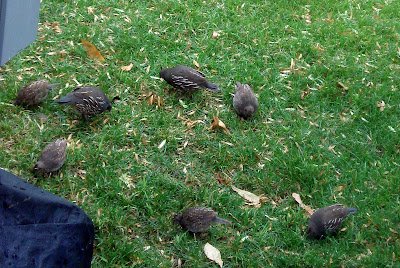 And here are the two California Quail families. Two males, two females, two babies per family. One is out of the picture.

California quail are not native to Utah. Fourteen pairs were introduced to the area back in 1860something. They are still very much California-ish though. No self respecting Utah family has only two kids!

OK...enough of that. On to the Before and After Shots of the Hat Room.

This will be the last B&A shot for awhile...only the laundry room and the cold storage room remain to be done, and we are in no hurry to deal with those issues just yet. 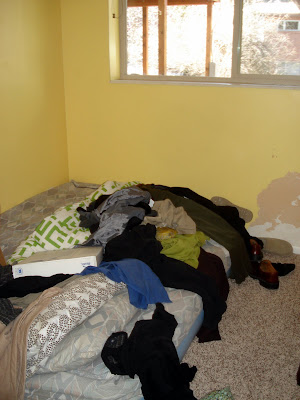 Before: I didn't even bother to include this room in the first tour of the house back on Dec. 31st. It was just a tiny downstairs bedroom wedged between the laundry room and the bathroom. Typically, it was painted a vivid color, and originally had bright olive green carpet. Oh, and the paint was lifting off the plaster because the former owners had created a planter on the other side of the exterior wall without bothering to seal the wall first.

Jeeze people. Get a clue!

The room was Gail's guest room during my mid Feb. meltdown season. It was the last room that got painted and I was in a fetal position around the paint cans by the time we started to roll the little room. I had no inspiration left to choose a color; bland beige was the best we could come up with.

Then a lot of junk got tossed in the poor room. The "junk" (everything that I just couldn't deal with placing in the house or getting rid of) later got moved to the famous former Bob Marley room, which now looks like a garage sale following a hurricane, put on by a crazy lady.

(Yes, eventually I will post those B&A pictures too...)

All of this is to let you know what went before with this room. This past weekend I finally got up the energy to create a livable space in the room for myself.

It was done to celebrate a huge event:

Can you believe it has already been a year?

What a year it has been!

I re-read the last posts from Houston, where a year ago I was packing two duffle bags, in a town where it was in the high 90's with almost 90% humidity. This past weekend in SLC it was in the mid 70's with humidity in the low teens.

I was glad to come to Salt Lake City. I loved it before and I love it even more now. But the year was very difficult.

* We basically moving four times in one year (to Jeff's condo, to an apartment, to a room in our basement, and finally into our whole house...)

* both B. and I starting new jobs

*I had to look at 70+ (mostly horrific) properties while awaiting the sale of our house,

*We wondered if our Houston house even was standing after Hurricane Ike blew through and knocked out power to that city for a week.

*I lived with just the contents of two duffle bags, a backpack full of computer stuff and my purse for over a month.

*Our son become engaged and married

*I had to oversee the packing of our Houston house in one weekend just before Christmas.

*There were a LOT of decisions to be made for the remodel of the house we finally decided on(paint, sinks, faucets, doors, windows, carpet...it went on and on....)

*I had no girlfriend nearby to hang out with (my real estate agent was my best bet for venting!)

*We worked at finding new friends at church, only to discover our small group had three pregnant young women, and I was the only other woman (sigh...they all had little ones already. Busy mommies!)

*I developed a ganglion cyst on my forefinger, which required surgery and bone scraping. Try living without your right forefinger for a while...try just turning the key on your car!

I could go on and on. Yes, I hit bottom around March. Yet even in my darkest moments I still looked out to Salt Lake City and thought "wow. this place is amazing. I absolutely love this place."

Are you still reading this?

Well...here it is, a year of testing and trials later...I feel sassy and happy again.

And I am SO ready to have a hat room back! 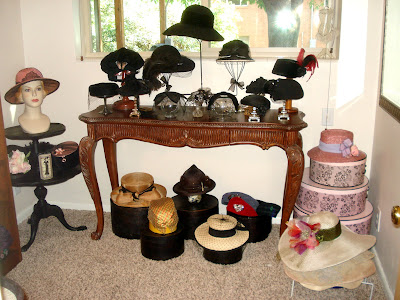 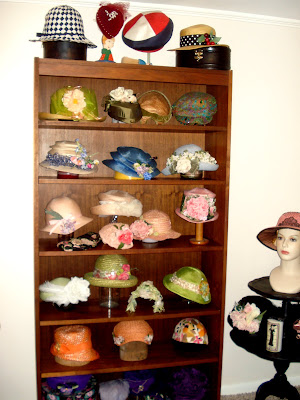 Not quite as lovely of shelving as my hat room had in Houston. With the low ceiling in this room, I just made do with whatever didn't fit elsewhere in our house! 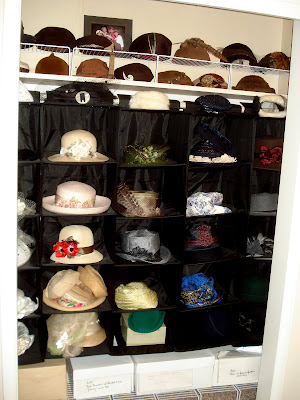 I used hanging sweater hangers to create a "built in" effect in the closet, and removed the sliding doors for full access. Very cost effective! 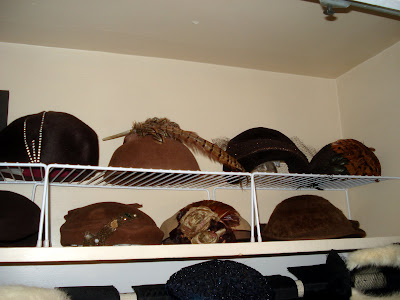 The upside is this make do shelving is that 98% of my hats are now on display, while in Houston I never had more than a dozen out at a time.
No more fussing with hat boxes...this tiny room serves as a walk-in closet just for hats! 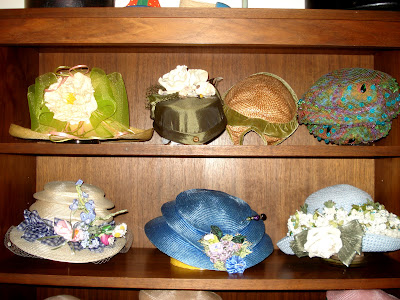 People at work are getting used to seeing me in a hat and are starting to warm up to the idea. My dear real estate agent Luann came over and "played" hats with me on Saturday. Several people at church and work want to come see the collection too. I think it is almost time for another "Sip 'n See" hat party!

I was told no one in SLC wears hats. I think that is about to change.

So how many hats do I have?

You will just have to come visit and count them for yourself. I will only own up to having a few more than a hundred. (With my fingers crossed as I type this...) 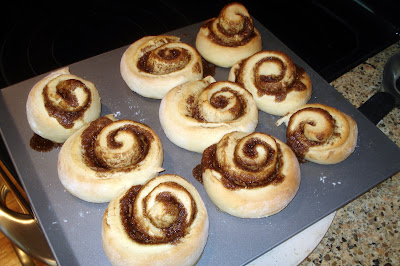 Bonus material: A batch of No-Knead cinnamon rolls that I whipped up for fun.
Even that simple recipe became a challenge to me.
We now live at just a tad under 5000 feet above sea level.
That is what is known as "high altitude" and it messes with all the baking and cooking recipes.
I'm learning how to cook all over again, in my new kitchen where I am still trying to remember where I put things.
Yes, so much in my life has changed.
Change is both hard....and good.
It stretches you and makes you toughen up.
It makes you grow.
Then, eventually, life goes on again.
Posted by Thoughts on Life and Millinery. at 8:23 PM 8 comments: