Flag day (June 14th) was spent BORED TO DEATH at the library. Most fun was getting updates via cell phone about the duck and five baby ducks that showed up on my Mom's doorstep on her birthday. Easter bunny, birthday duck????

Thanks to all my friends who emailed mom!

I am still using B.'s slow typing laptop, so no pictures,

I have spent about 3 hrs. on the phone with my cable provider, explained that we had a REALLY BIG STORM and my internet is down. FOR THREE HOURS I have been clicking through screens with the online support team, bought a new cable because "they" said I must have a bad cable

(cable might be bad? HUH? oh well, anything to make them happy...)

and FINALLY they say: "HAVE YOU HAD A STORM RECENTLY?

Me: Yes, I said that already a few times.

THEM: OH, well, you probably have a blown modem then. We'll have a technician out to give you a new one.

SO...I spent the day at home with the cats waiting for a technician, who never called or showed up.

Finished Gayle's hat, my first ever "commission", and it looks so great! (is it enough that I live near Humble, and so therefore I don't have to BE humble?)

And once the "technician" shows up, I will post a picture, of the hat from beginning, and done, and maybe on Gayle herself.
Posted by Anonymous at 9:43 PM 1 comment:

Today I learned a lot.

I learned that the elephants at the Houston zoo are very smart. They have been trained to bring any item that has been tossed into their enclosure to their keepers ( six keepers, three elephants). In return, the keeper gives the elephant a treat. One day one of the elephants had a little extra time and brain power available. So she dismantled the enclosure's light fixture, and spent the day bringing the resulting pieces to her keeper, one by one, in trade for treats. This was reported in our Houston Chronicle.

I learned that I would love to throw a party in honor of my Mom, who turned 80 years young today. Being half a continent away from her, and having my friends, (whom I would wish to gather together for such an event), scattered across the world, makes a party out of the question. Sometimes I do wish I had a private jet and could swoop up everyone and we could go party together. My friends would love each other! They would adore my mom.

Maybe wanting a jet makes me only 65% rich.

I learned that a virtual party has its own special charm. That sending an email asking my friends to send a message to my mom, ( most have never met my mom), resulted in a cascade of greetings and birthday wishes racing from around the globe to appear~magically, I swear~ before my mother's eyes, within minutes! How's that for a "Come as you are/Surprise" party?

I realized that if I am someday so blessed to become eighty, I will remember my own mom's 80th birthday. And I also realized that I can't recall any of the other 53 birthdays that she has celebrated in my lifetime. Odd, that.

And that in my mind's eye, I picture my mom at about age 35-40. I'm always a little surprised when I see her that she has aged. I'm just annoyed that we can not be 53 together. It would be such fun.

Today was hot. It got up to 97 degrees. Late in the afternoon the sky turned dark denim blue, and lightening bolts spangled the horizon. The wind blew as I drove home from shopping, blew hard, and bits of trees and paper and other things swirled above me. Moments later the rain fell, and the road was four inches deep in water. Power failed, traffic signals went blank. I dodged people sized tree limbs in the street, and cautiously went through intersections that were now without working signal lights.

By the time I got home the power was back on, and the television reported that we here in Kingwood had experienced winds clocked at 60 mile an hour. And more fun was on the way. More rain, heavy rain, and hail. We should seek shelter immediately, and stay away from the windows.

I keep wondering: From where do the television people imagine that they are being watched, that does not come under the definition of shelter. Are there people who plug their sets into a long extension cord and watch TV in the middle of their front yard? Or out in a field? Maybe mobile TV has really caught on, and people are watching the weather channel in their row boats. I don't know.

Maybe I have some learning to do there.

From the window I watched the hail fall. Not a lot, just baby pea sized. Lots of rain. Lots of lightening, and crisp tearing sounds, followed by booms. It made me want tea. The TV said it was still 97 degrees outside, but it looked cold to me, like cup of tea weather. Air-conditioning helped that fantasy.

While I drove home, I had suddenly felt like I was saturated with blessings, and had found myself a little teary. So glad I have a Mother who is celebrating a birthday. And friends who rejoiced with me in her day. And oddly, I also felt very, very tired.

Bernie was napping when I got home. I think the sudden drop of pressure from the storm did something to us. By six I decided to go to bed.
At seven Bernie woke me. A dear friend was calling. Tests were back. She has cancer. Damn. Damn. No.

I knew Laura would know what I should know about this cancer. So I called and I asked her what she thought. And I learned that a good treatment outcome is very likely.

They say a friend is someone you can laugh with and cry with. I called back my friend, and we did what friends do. We laughed and we cried. And I learned a fragment more of what a treasure this friend is.

And finally I learned that while power is back on, the internet server on my computer is out, due to the storm. So no pictures with this post. I am using B's laptop, on a different server. And I learned that his keyboard, while quieter, is a lot slower than mine.
Posted by Anonymous at 9:52 PM No comments: 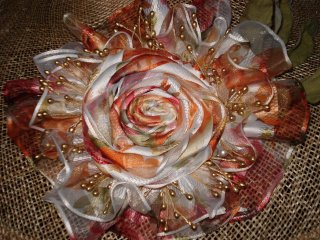 Close up of the Midnight Sun 3 minute rose.

Oh, and Tiggie said to be sure to mention that he helped too. 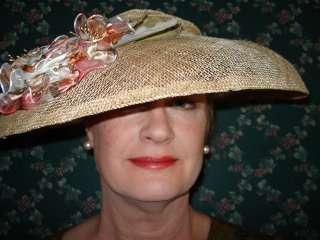 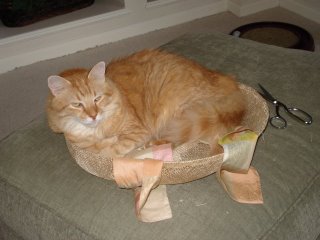 Posted by Anonymous at 12:07 PM No comments: 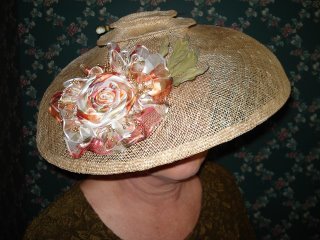 A while back I wrote about creating a hat at midnight, using a 3 minute rose technique, on a straw hat I blocked on a bowl I got at Ross out in San Diego.


I promised pictures, so here you go!

I've named it "Midnight Sun", as the rose looks like a sunset sun to me. I used my newly acquired gold stamen while making the flower.
Love stamen!

The hat is held on by the hat pin, slid though a bun, or a pin curl (a lock of hair in a pin curl, then the hat pin goes through the curl, locking the hat down).

There is a scarf tied in the back. I love that the hat just sits on top of your head, light and cool, providing shade. 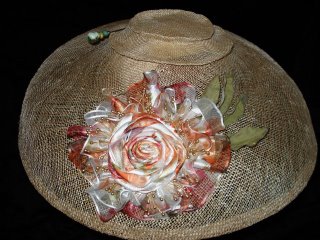 I wore it to work, and had someone stop me in the parking lot, asking where I got my hat!

No horses stampeded either.


(Notes on bowl blocking: Get blank, unblocked hat. Judith M. or Hats By Leko, on the web, have a good, reasonably priced selection.

Look for bowls at Ross, Marshalls, Ikea, or Nordstoms, if you've got the bucks and the guts.

Ignore the people who are staring at you.

Once you have decide on great bowl, pay for the bowl quickly, before the store has a chance to call for the people who bring the straight jackets.

A tip of the hat to Kate, who pioneered this method, and who now lives with the Swiss overseas. I am told that these two facts are unrelated.

Tips to Reduce High Energy Bills...or... Does Al Gore know about this? 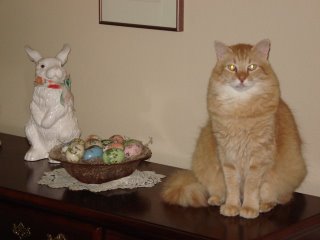 Tip #1: Be sure to unplug your cat when not in use.

Few people are aware that one of the unaddressed causes of global warming is cats.

Cats know it, and do not care. They will continue to shed at will, blanketing the earth in fur. Tragically, this precipitates increased vacuum usage.

(Feel free to submit your own funny caption for this photo!)

Posted by Anonymous at 9:59 AM No comments: