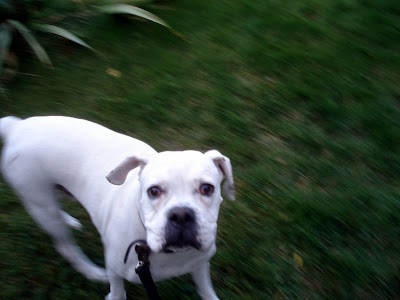 I did mention awhile ago that Tiggie beat up our neighbor's dog Krauss didn't I? 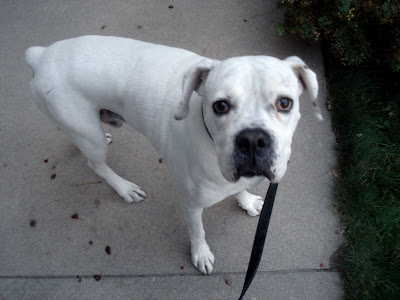 Now isn't this the sweetest boxer face ever?
He was a rescued dog last winter...came with major injuries to his "scalp" that have since healed nicely. 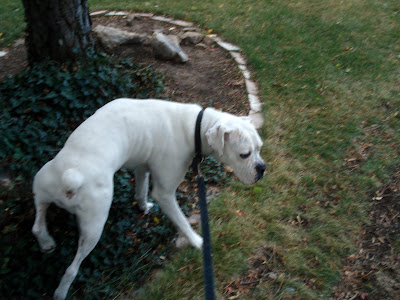 Now his life is good...he is well loved by his owners and his next door neighbors.
Well...at least most of the neighbors.
Tiggie still uses kitty cussing when Krauss is walked by.
We always apologize for Tig's language when that happens.
Krauss is now taking it all in stride.

Apparently he doesn't understand Cattish well enough to be bothered by whatever it is that Tigs is saying. I think that is probably a very good thing. 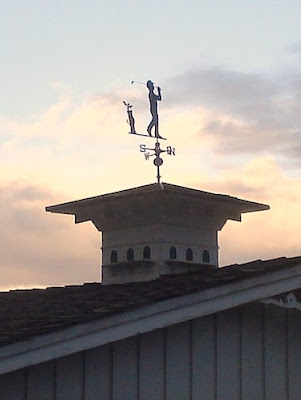 Sometimes I join our neighbors for a spin around the neighborhood with Krauss.
I thought of my fellow "grass widow" friend in Florida when I saw this weathervane on one walk.
Great Christmas gift idea, huh?

(Thanks for being a pal Vicki!)
Posted by Thoughts on Life and Millinery. at 11:45 AM 7 comments:

Well, Picassa/Blogger FINALLY got its act together and I can post picture again!
It was so frustrating to be in the midst of serious re-decorating energy and not be able to share the process with anyone.
Obviously a girlfriend right there with me with a fresh eye would have been the best thing, but I'm patching along using the blogdom sisterhood instead.

So first...let me post the sequence of the great glass fireplace adventure:

Try one: not enough fill, too even of texture. B. doesn't care for the red "jelly beans."

Try two: Too bland, too icy for our room. Gorgeous when the flames are lit however!

Try four: Texture and contrast is right now, although I wouldn't mind a few more black and deep teal pieces. The teal looks really great in the flames.
(FYI: the glass comes in like 200 colors on line...)

Another little detail: I've photo shopped out most of the stains on the floor of the fireplace, plus there is an ash sweep out door set into the concrete too. That bothered me...

Try five: Added grey black volcanic rock under the burner pan. The floor of the fire place has stains the I couldn't get out...and this was an easy natural looking fix. I'd like to add about 3% of a shiny black lava rock to the mix on the floor, and a bit of black glass with mirroring into the mix in the pan so the glass would reflect light and sparkle even when the fire wasn't lit. 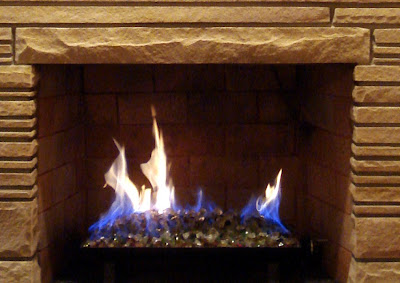 OK...now you are up to speed with the fireplace project! 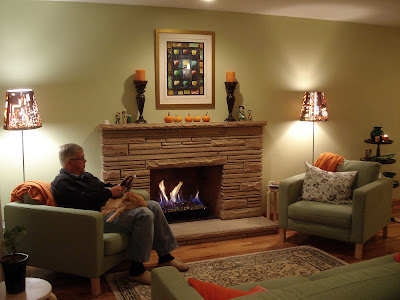 Then there came the lampshade and area rug project.

We have owned the area rug (pictured above) for years. It has got a very low pile, but I do like the cream, black and green design.
We have been hunting rugs for quite awhile, ordering first a bright orange and lime rug...which is no longer made as we found out later.

Turned out that while you can order it...you just will not ever get it, and will spend a ton of time demanding your money back...like four months worth of time. Grrrr....
But in the end, not getting it turned out to be a blessing!

We also were on the hunt of lamps. Fell in love with a set that we could order from California...and I could see them when I visit there next weekend.

But....for about 1/10 of the price of the "in love" lamps, we could have the lamps pictures above.

They were interesting at night, and awful during the day. So back they went. 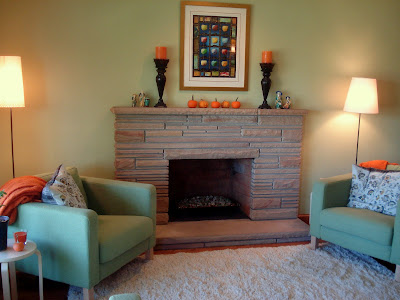 Two kinds of beige lampshades were tried next. Our neighbor dropped by and saw them when I had "one of each" on the lamps, and she thought that was very cool. Less "matchy-matchy."

I also had tried an orange velveteen drum lampshade that was really bold.

We settled on the basic whitish colored lampshades...THEN I got this area rug. 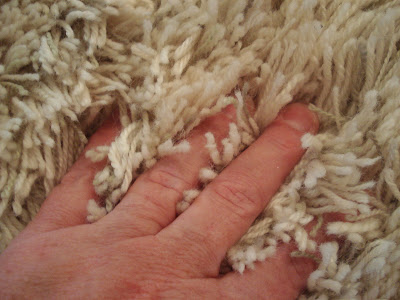 Wool, with random green yarns. Oh does it ever feel good on the feet!

It is a bit larger than our old rug. Bernie loves it...I like it...and it was half the price of the other rug we had ordered and not received.
But now I think the lampshades look blah.
I'm considering black lampshades now.
(Christopher Columbus may have thought he was on quite an adventure; he never had the chance to pull a room together with a high energy feng shui disorder woman. Laura named this syndrom: it is what they call it when a patient has to have every little detail in their room just perfect or they just can't stand it!)

Stay tuned for updates on that the lampshade detail!

Another project: When we moved in the drapery was a sheer deep coral. It didn't work...was old and stained, so we needed *something*...and so I shopped till I dropped to find *something* that would would go with our wall color.
I was thinking a green...and weirdly every green drape turned a hideous pea soup color by lamp light. Ewwww....
So I gave up and went with white. It looked better than the nothing we had before.

Who knew the white would turn purple? 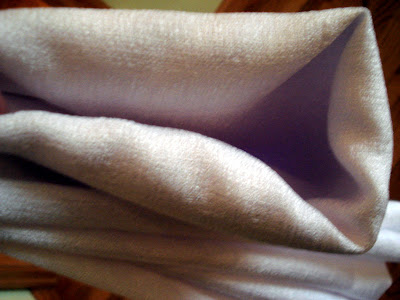 There is a chemical brightener that is used on white fabric to keep them from turning yellow. In this case, it turned lavender instead!
We also found that tugging the drapery close and open by hand, and trying to keep the gathers even was a pain in the neck. It took several minutes to arrange the drapery neatly, otherwise it looked like an unmade bed to me (my feng shui disorder thing again...I was tempted to get out a tape measure and adjust the pleats to exact spacing. This is not a good thing.) 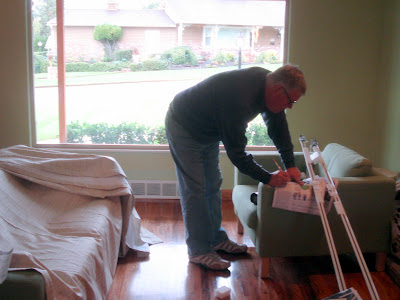 So back to the hunt...and I did find pinch pleat drapery at JC Penneys that 1. would allow me to just tug a cord and not fiddle with pleats, and 2. that would blend in with our colors.
Thank you LORD for giving me a husband that can do the necessary math involved in hanging drapery. At one point he asked me what 175 divided by two was.

My eyes got big...my brain locked up...he shook his head and continued working without waiting for my answer. 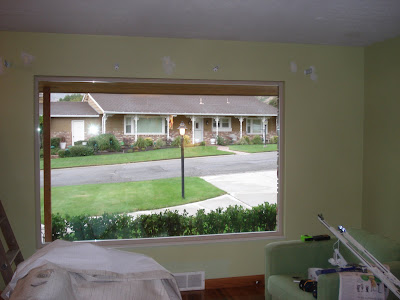 A little patching from where the barely used old rods hung. 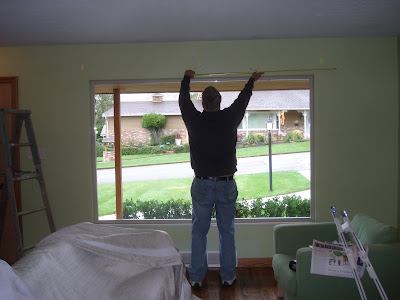 The up went the new rods.
Tall is good when hanging curtain rods. 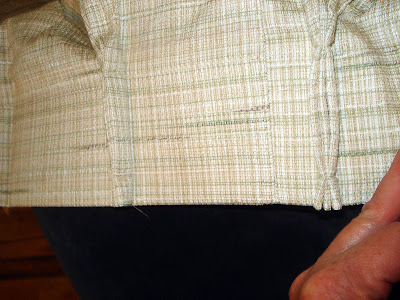 My job was to insert the pinch pleat pins. I discovered in talking with the under thirty set that many of them have no idea what is meant by "pinch pleat drapery."

Above it a picture of the "pinch" pleats. They go at the top of the drapery. 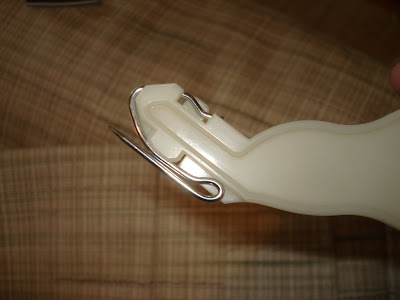 A little metal hook is inserted into the pinch, using a small plastic tool. 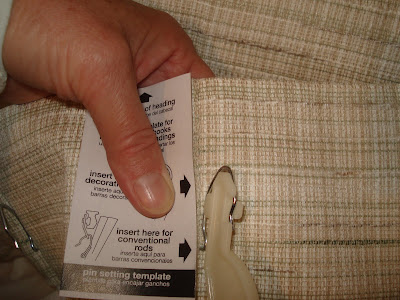 The hooks have to be inserted at exactly the same place in each pinch or the top of the drapery will look wavy, and drive feng shui disorder people bonkers.

The hooks then get stuck into an eyelet plastic piece on the curtain rod track which allows the drapery to be opened or close with just a tug of a cord! 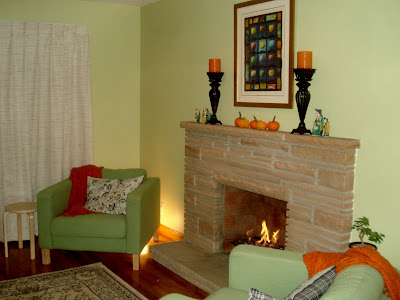 You can see the drapery hung in the corner behind the chair.
Beige sheer drapes are also on order; when they come in they will be hung up behind the solid drapery so we can open those and still be able to see out through the sheers, while people will not be able to see in.
There is also valance material...I'm still thinking about whether we will use that option.
Whew.
So we are set on the drapery, set on the fireplace rocks, set on the rug, and set on the lamps, but the lampshades are still up for reconsideration.
Oh, and I have three other pillow options that work on the couches if I decide I want to switch out the look.
(I own waaayyy to many pillows....someday I'll blog about that!) 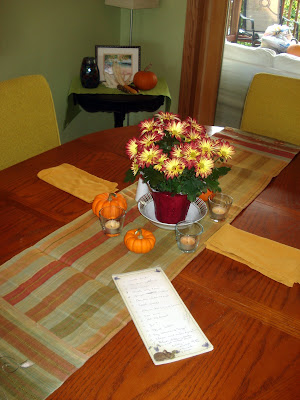 Bernie is heading out for fishing.... 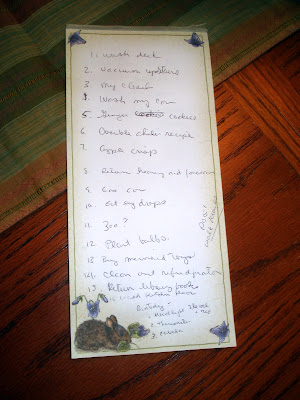 And I am tackling my list on this day off .
Columbus: Thank you for exploring.
Thank you work for making it a holiday!
Thank YOU for reading about the exploring going on around here!
Comments and suggestions are welcomed!
Posted by Thoughts on Life and Millinery. at 11:06 AM 7 comments: