Lessons in the snow 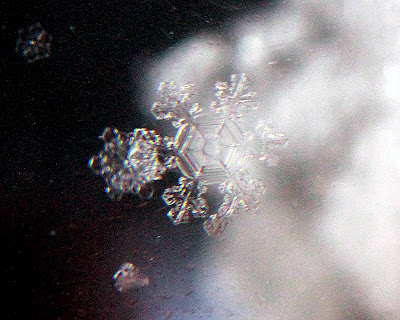 So...God has a treasury of snow.
And according to God's Word, He stores snow against the day of battle and war.
How?
When?
Where is this treasury?
Will we get to see it in heaven, or will it be emptied during the Last Battle? 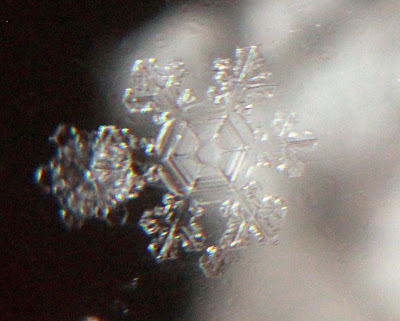 Yesterday this oak leaf ringed snowflake fell on our back deck.
It stood out from others that had fallen as it was clear.
While all snowflakes are born in clouds, some pass through clouds of frozen water molecules that stick to the crystal snowflakes. 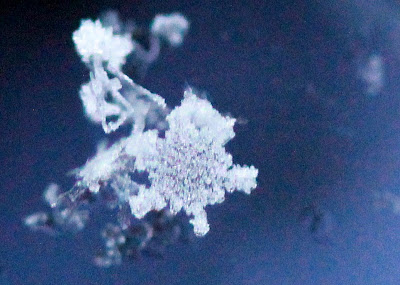 The molecules may attach lightly, or may cover the snowflake so that only the flake's shape remains. 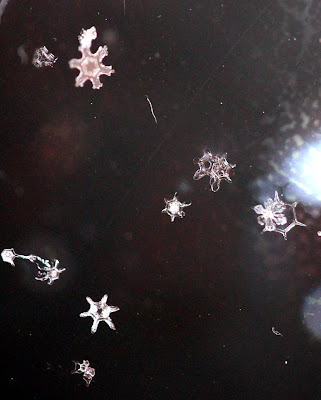 Here are a few tiny, tiny flakes that landed without breakage or rime. 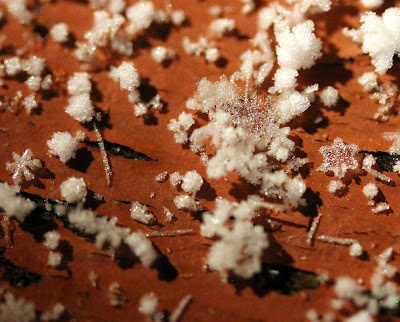 Wednesday night when the snow first began to fall it was 42 degrees outside.
Way too warm for snowflake photography; the flakes melted upon contact with the earth.
I kept one eye on the thermometer and another on the flakes.
Most of the flakes were falling as graupel, that is, as fuzzy mini snowballs.
Inside each graupel ball is a crystal snowflake that has been encased in frozen water molecules.
As I watched, I noticed needle shape flakes began to populate the deck's railing where I was watching. They form at around 25-21 degrees F.
I checked the thermometer.
The temperature was about 28 degrees.
I imagine it was much colder than that just a bit higher up in the sky.
It is so fascinating to me to realize that water molecules are organized by temperatures, and that bit of physical science mystifies scientists.
Why do the molecules make needle shapes at one temperature, and go all lacy doily like at another? 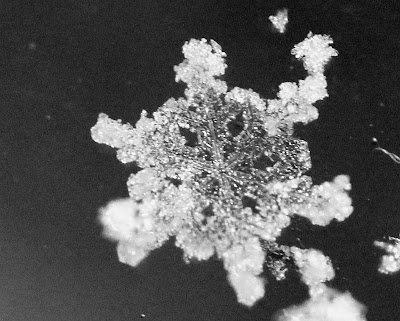 A rimed and nearly melting snowflake. 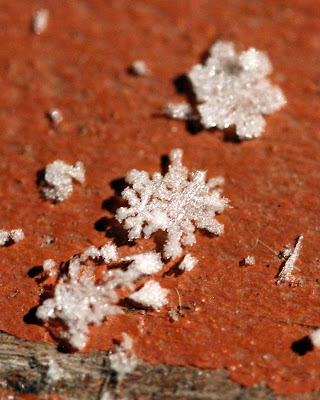 Rime makes snow beautiful in its own way.
Rime also figures into the way snow layers and according to one website, both helps and hinders avalanche issues, depending on various factors. 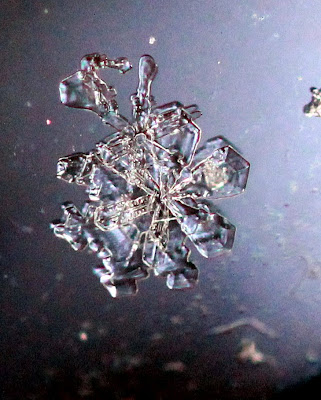 As I watched the various elements that are part of snowflakes, I had a small sermon preached to my heart.
Each snowflake is created to elegantly reflect light and be utterly transparent.
And yet...should it travel through a cloud that isn't creating snowflakes but is creating frozen water molecules instead, the beauty of the snowflake (at least to the eye) is marred, and possibly made unrecognizable.
The snowflake may arrive and shatter, or may arrive when it is too warm and will melt away instantly.
Or it may manage to journey unmarred, and arrive unseen.
Or it may be seen and noticed.
In the end, all the flakes will pass away into another form; water, or vapor.
Rimed...
Graupel...
Shattered...
Melted...
What do you think your life journey would show?

I believe He sees each flake's journey, and ordains it, just as He does our own.

Posted by Thoughts on Life and Millinery. at 9:00 AM 7 comments:

It would have been a LOVELY day.... 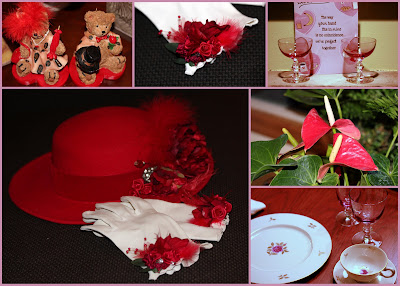 Oh yes, we were cued up for Valentine's Day around here.
Bernie flew home from being gone a few days ready with gifts and cards.
I had our table set and the champagne cooled.
Then Luke's Valentine's gift arrived for me.
His mother got the same gift.
Stomach flu.
Ewww.Valentine's evening was spent uncomfortably with Luke's unwelcomed gift.
(He had come down with it two days before himself.)
The High Silver Tea?
It didn't stand a chance of happening.
Bernie promised he will take me out for High Tea at the Grand American Hotel soon to make up for it.
And since no good deed ever seems to go unpunished (ahem, I exaggerate) Bernie himself then got his belated gift of flu a few days later.
Today is the first day in a week where food has been consumed without caution and energy levels have returned to a sort of reasonable level.

(Collage: My Rhodora Lenox china, circa 1950's,  from my grandmother with matching fuchsia goblets, an antherium plant gift from Bernie, the unworn hat and gloves and the little Valentine's Day bears who did wear their hats anyway.)

Posted by Thoughts on Life and Millinery. at 12:05 PM 8 comments: