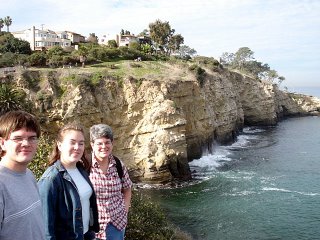 My dear friend Gail had never taken the La Jolla Coast walk, as she grew up inland.

It was a pleasure to introduce her to a part of San Diego that she had missed seeing during the 30 some odd (some VERY odd...) years that she lived here.

Her "Applying to Med School" son Scott and Middle School Science teacher daughter Elizabeth joined in on the fun.

Gail and I met after I sent her a baby present, two months before we actually met. That was 27 years ago! 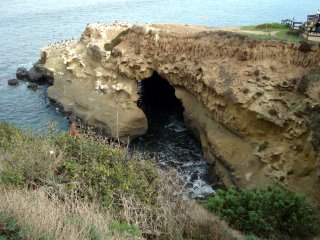 PERFECT day for a hike. 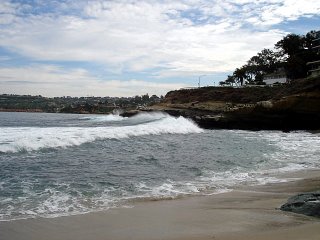 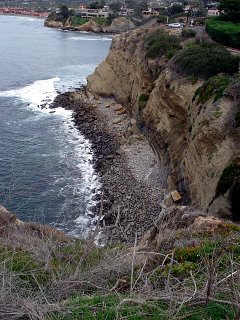 The red roof buildings in the upper left hand corner of this picture is three blocks from my parent's home. 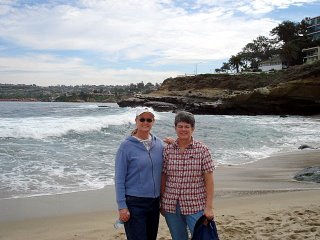 Gal pals at the beach. We've gone here to walk around tide pools during low tide in the past.

We try to co-ordinate our San Diego trips in order get to see each other without paying for an additional trip.

This was the first time we've managed to hit Christmas in San Diego at the same time in years. 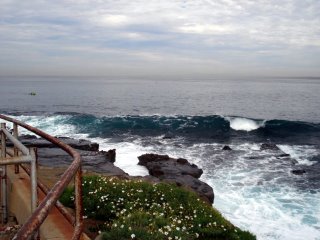 The water was so pretty and the surf was kickin' too. 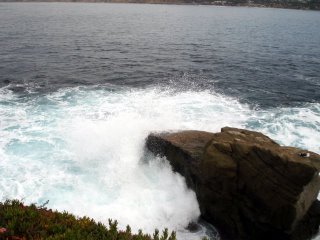 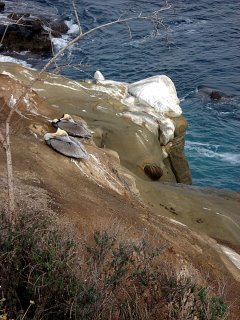 Growing up I don't remember so many stinky pelicans around.

Between the pelicans and the stinky sea lions that have taken over the part of the beach know as "The Children's Pool", I have a new lack of appreciation of aquatic life.

The sea lions regularly make the national press, as the lazy beasts lounge on the beach and the animal rights folks have deemed them more important than the humans.

We are still astonished and laughing out loud at the reporting of an incident when a swimmer swam around the coastal bend, and then swam into the "The Children's Pool" beach area, startling the sunbathing (read: loafing) sea lions.

The sea lions humped themselves into the surf and swam away in disgust.

The swimmer was rounded up and ticketed for "causing the seal lions to dive into the ocean, terrified."

Huh? I thought they liked going for a swim in the ocean...isn't that where they have to go to get food anyway?

After that we walked around downtown La Jolla (AKA: The Village) and peeked into the La Valencia Hotel. Scroll down from that link site, there are a lot of great pictures of the place.

Gail and I "pinkie swore" if either of us ever becomes a multi-gazillionare, we would spend a week at the hotel, loafing around its 1926 year old grandeur, hiding out with the rich and famous.

We also walked around looking in the windows of all the fabulous jewelry stores, and selected which jewelry pieces we would acquire for ourselves and our daughters if the gazillions were ours already. (Mom, if it ever happens, I'll let you pick first!)

We have excellent taste.

And make believe is still a lot of fun.

After that my dad provided us with his version of limosine service, picking us up in his van where we started our hike, and giving us a guided tour of Mount Soledad and the Veterans Memorial on top.

Who needs gazillions when so much wonderfulness can be had for free?
Posted by Thoughts on Life and Millinery. at 3:04 PM