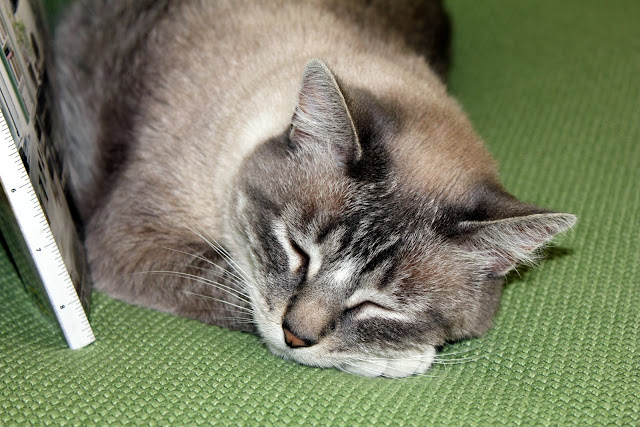 While Frenchie doesn't find this too terrible exciting.... 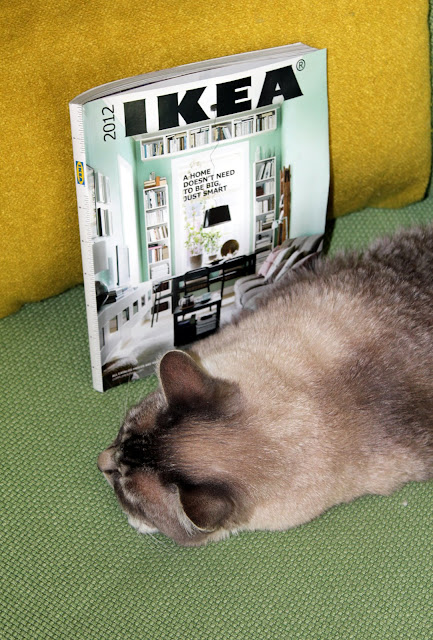 I sure do.
I just got my NEW 2012 Ikea catalog in the mail yesterday! 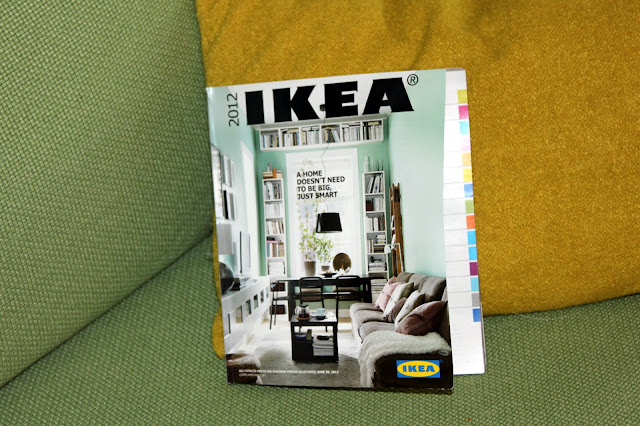 For me, getting the newest Ikea catalogue is something I look forward to all year.
I immediately sit down and study each page carefully, noting ideas and dog earing pages that interest me.

There is just something about their catalogue and store that makes me feel good, excited, and freed up.

This year, on page 21 of the catalog, there it was; the "something" put into words:

"To create a better everyday life for the many people".

That is almost the exact same vision statement that I had written when asked as to why I wanted to get my bachelor's degree in Home Economics, and later my Masters degree in Library Science.

Twice in the college application process I had written that I wanted to learn ways to help people and families find ways to run their homes and relationships that would made their lives better and more efficient.

I think that is why I love Ikea stuff so much:  Almost everything I have acquired from their store has streamlined my life while still adding beauty. When I found areas in my house frustrated me I often found solutions in what Ikea had to offer...and was delighted at how affordable and stylish their solutions were.

Whether it was slide out kitchen cabinets, washable upholstery, comfortable chairs or long enough drapery, I have found solutions at Ikea that made my everyday life easier.

Has everything at Ikea been a home run?  No, but their customer service team has been great at allowing returns or replacements.

Do I know enough about the privately held company to know if I agree with all their investments and political involvements?

I do follow what I can...and for the most part I have found their actions speak in a manner with that suggests this is a company with a heart for families.

A simple trip to their in-store restrooms told me how much they valued children and families--they had provided step stools for children to use to reach the sinks and extra diapers for free.  In the store was a place for children to play...and three levels of handrails on the stairs so little ones can hold on too. Every time I visited one of their stores I saw new ways that the company shows how they were thoughtful of families.

With each passing year of my life, I find that I want my home and life more simplified so I can get out and do more.  I want to have less that does more.

As I browsed through the new catalogue, seemingly targeted to the 20 and 30 somethings, I realized that Ikea was offering lots of "more with less" options that I had never considered before, ways of thinking, and options that a lot of us boomers will need to consider as we downsize, right size or make do on less income in our retirement years.

Currently my house is close to 3,000 square feet, and frankly, with six bedrooms, that is much more square footage than the two of us need.  We basically live in the upstairs portion, and keeping everything as simple as possible has been our goal.

Ikea "gets" that.  The last part of their mission statement rings true:

"There's more to life than furniture"....or adding more and more odds and ends to fill up a space.

Ikea continues to amaze me, year after year.  Thirty four years ago, when Bernie and I became engaged, we registered at a Danish furniture store, deciding on Scandinavian designed kitchen wear.  The clean sleek look appealed to us...even though I was much more of an "Early American" furnishing kind of gal.

Since then we have had contemporary, Early American and French Country style home furnishing.  Tastes change...the brown/orange/macrame styles of the 70's gave way to the blue and rose/pastels of the 80's, then the heavy florals/plush forest/deep blue/garnets of the 90's.  Our "start from scratch" empty nest purchases were the French country sage greens and highly detailed mahogany/burnished golds/blackened silvers.

I've liked the look of each phase.  Probably if we had stayed in each of those house so decorated, I might still be surrounded by that era's signature look.

The funny thing is:  A lot of the Ikea products in the 2011 catalog are the same items first sold in the same year that we were married.

Maybe we had the right idea when we started out...keep our living spaces clean, simple and streamlined.
Maybe it just took us living through a few eras to discover we actually had it right the first time.

Posted by Thoughts on Life and Millinery. at 4:02 PM 5 comments:

Udders in the sky 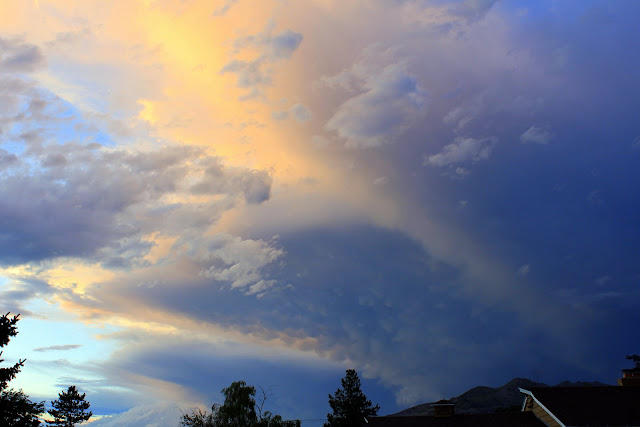 Hey guess what?
We had udders in the sky! 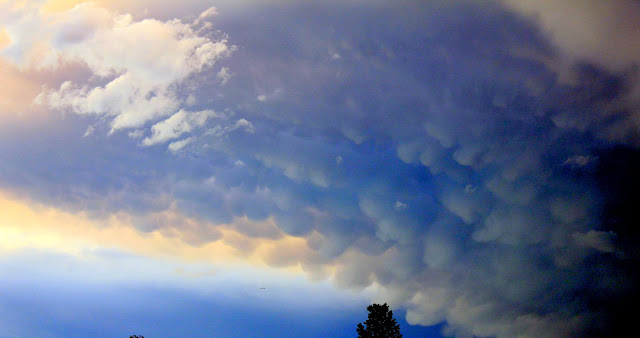 I thought the clouds outside my living room window looked pretty interesting the other night, so I did like my friend Vicki always does: I ran out and took a picture.
Those cotton ball formations caught my interest so after I was done taking pictures I went and looked them up in my Cloud Identification book. 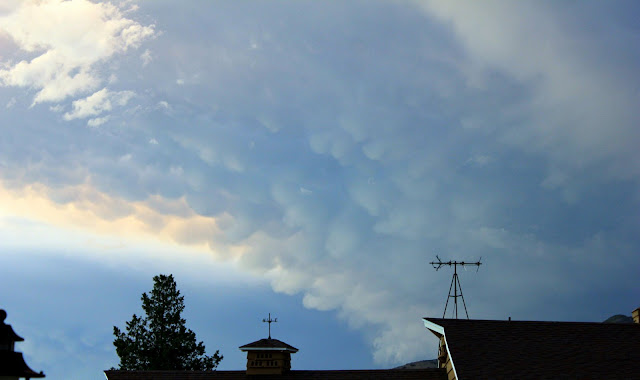 
Frankly, if my kid ever yelled out "Hey Udder!" to get my attention, I would immediately be getting his/her attention too...and escalating my attention getting efforts with a swift swat to his/her backside the second time it happened.


Mammatus clouds: Bet you will know what to call them when you spot them floating around up in the sky next time.
(Bet you will more likely forget the proper name though, and just say "Wow! Udder Clouds!"  Be prepared to be stared at when you do!)


Posted by Thoughts on Life and Millinery. at 5:41 PM 5 comments:

On being a former pacifist

Our cat Frenchie spent the night at the vets last night.


I'll let her explain the situation: 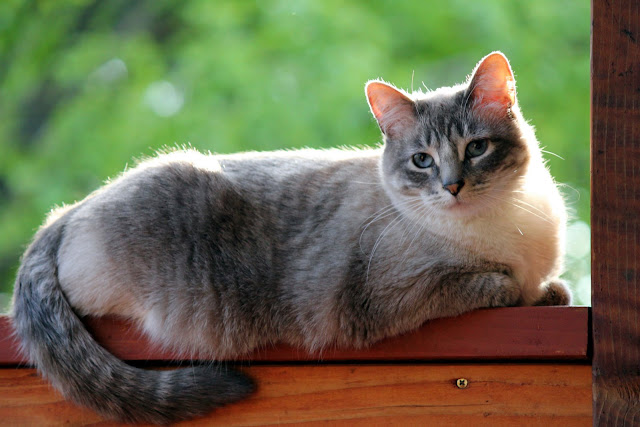 You know that place in the Bible where Jesus say "Turn the other cheek"? 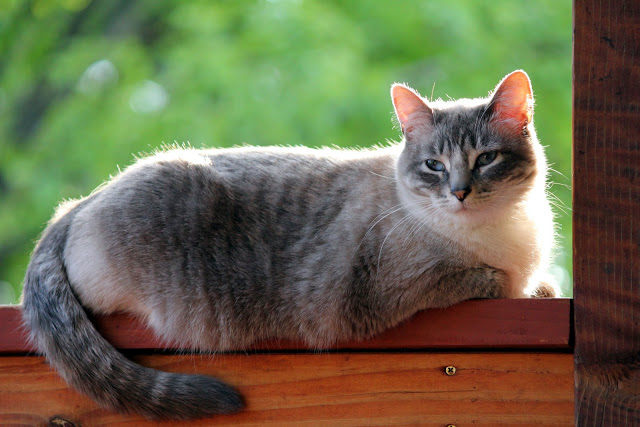 Well the other day the cat up the street Missy came through my yard and when I told him/her to leave, he/she just didn't. 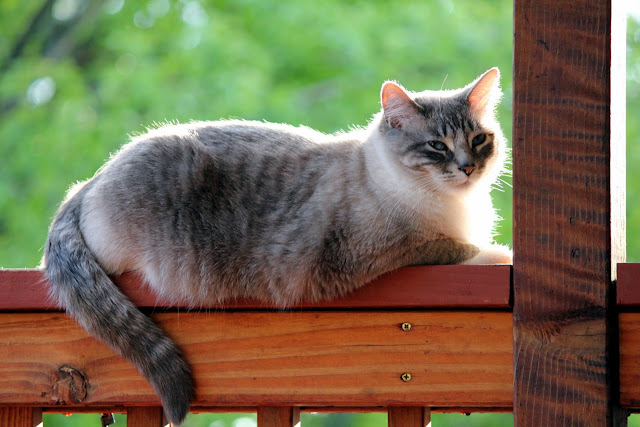 I got up a little closer to him/her and made my point again. 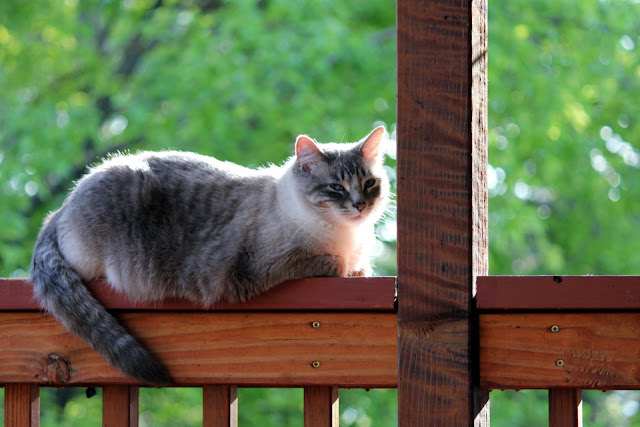 When his/her claws came out and my face got a smack, I decided to "turn the other cheek" and run. 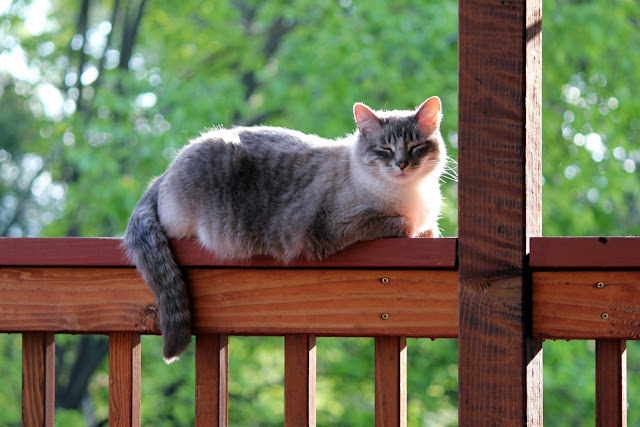 Apparently Missy isn't a good Christian.
He/she nailed me on my "other" cheek too.
The last few days I've been feeling pretty low, and my fur has been falling out 'cuz I have had a fever.
Jill noticed that I was swelling around the base of my tail too. 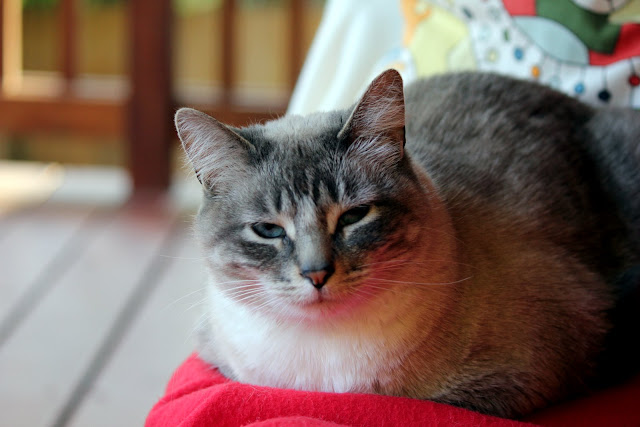 Jill and Bernie finally took me to see the vet.

The vet's nurse understood what had happened to me.
As she put it: "You turned the other cheek and that one got bit too, didn't it?" 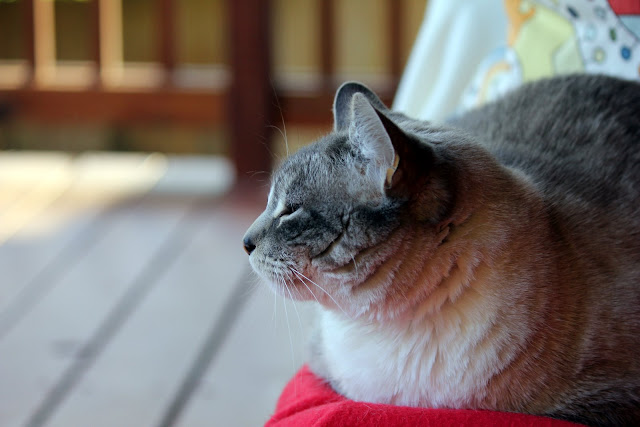 I think this pacifist thing is for the birds.

At least for us cat types.
Turn the other cheek, my butt!


We'll be picking Frenchie up from the vet this morning. She had to be put under so the vet could clean out her abscess, and give her an injection of antibiotics.
I'm sure I will be writing a check that will have at least three numbers in front of the dot.
Looks like Missy managed to take a chunk out of us too, money wise.


PS: Special Happy Birthday greeting to Cessa, my grandgirlie cat, from us and all the cats here!
Can't believe you are already TWO years old!

Posted by Thoughts on Life and Millinery. at 9:10 AM 6 comments: 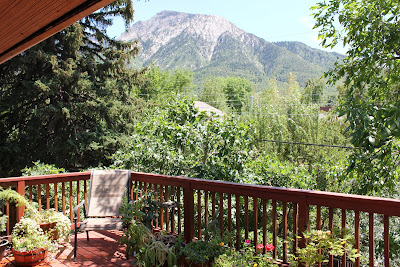 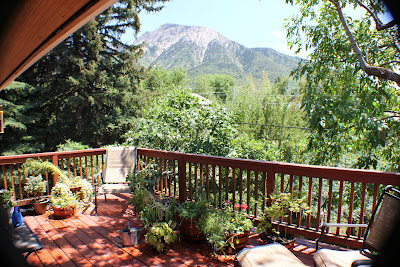 Same shot, taken at the exact same place, only this time with a wide angle lens.
I kept thinking I wouldn't really use a wide angle lens, but then I noticed how often I did want a photo of scenes that were bigger than my regular lens could capture.
I priced the official Canon lens...and quickly knew didn't want to spend that much for an official Canon wide angle lens that I would probably only use once in a while.
Ebay to the rescue.
Twenty bucks later for a "Made in Japan" lens...well, my photo world just opened wide up.
Yeah, a bit of optical bowing shows if I try a wide angle shot of something closer, like the kitchen table.
But for a distance shot...hey, it works just fine for me.
Posted by Thoughts on Life and Millinery. at 7:42 PM 5 comments: 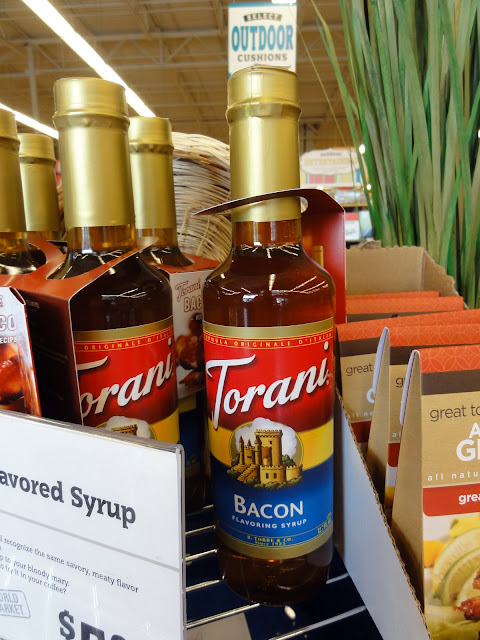 Have you seen this stuff?

Bacon flavored syrup. What the....


Torani kindly supplies recipes for such classic beverages as the Bacon Alexander and the Bacon Bourbon Sour, the latter of which includes bacon syrup, lemon juice, bourbon, and a strip of real bacon as a garnish.

I did find a write up by a foodie who claimed a fried peanut butter and banana sandwich drizzled with Bacon syrup is just the greatest.

I am wondering if I dabbed a little behind my ears could I befriend cats, dogs, skunks and raccoons faster?

Maybe a bacon latte wouldn't be such a bad idea...after all, bacon and coffee taste great together.  Less work, less calories....win-win?

So...tell me: How would you imagine using this product?  Do tell!


Posted by Thoughts on Life and Millinery. at 3:23 PM 6 comments: