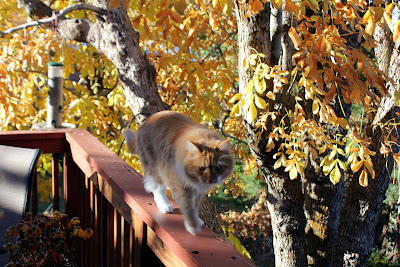 November is off to a grand start. 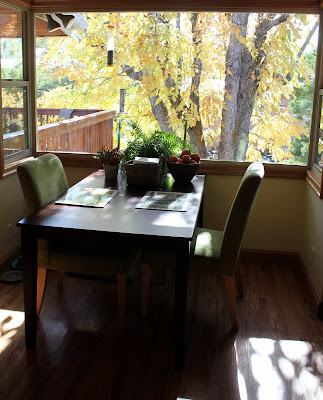 Each morning I am thankful for the autumn beauty outside my window.
Thankful for my warm mug of pumpkin spice latte.
Thankful for a new table in our kitchen area (replacing a shabby chic "just for now" table that had legs that didn't cooperate with our legs at all...)
I spent November 1st, the Day of the Dead or All Soul's Day, depending on your cultural upbringing, attacking a long list of neglected household tasks.
Some cultures really have a great time celebrating the Day of the Dead with humorous skeletons and breads shaped like skulls.
I took a pass on all that fun. 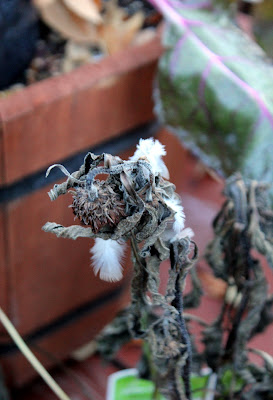 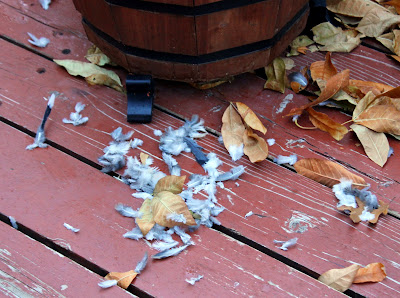 I am not sure exactly which cat provided the Day of the Dead feast.
Truthfully, we have never seen any of our cats successfully nail a bird, although Bitsy has from time to time come close. 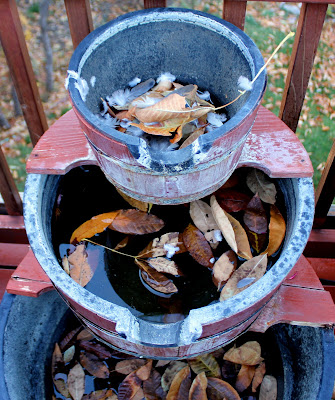 It must of been one heck of a celebration.
Feathers were every where, even in the leaf filled water fountain.
(Another task on my never ending "to do" list: drain and store the fountain for winter.) 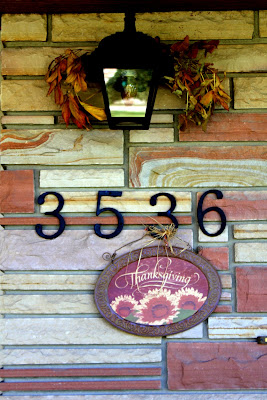 With November comes the season of Thanksgiving.
The reminding sign is hung by our front door, and on the page facing my "to do" list is now a daily thanks list that gets added to through out the day. A bit of raffia, spent sunflowers and peony foliage with other bits from the garden has been tied to our lamp post.
The Indian corn will likely be appreciated by our neighborhood deer.
I am willing to risk that happening.

Didn't take much time to tie all the pieces on to the lamp post and now I see it out our front window and think it looks quite festive.
Today is Nov. 2.
My beloved Mr. B's 59th birthday!
He is in San Antonio today and will return home around 4 pm after a week's absence.
The past month he has been home about four days all together; work and family needs have taken him to Edmondson Canada, London England, San Diego California, and Greenville South Carolina, with stops in a handful of other cities as well.
We are hoping his suitcase will be tucked away for awhile after today.
Tonight...we celebrate both him coming home and his last birthday as a fifty something old man!
Posted by Thoughts on Life and Millinery. at 11:06 AM 7 comments: 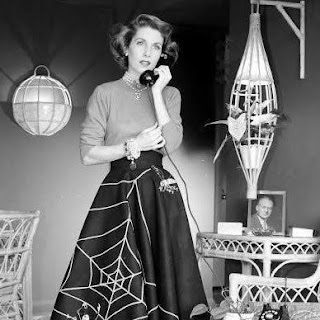 Well, I wish I could have my bloggy buddies over for a good catch up time together.
I promise I would wear a great outfit like this one when you came over for the party.
(Hostesses may not wear a hat...so a cool skirt would make up for that disappointing little detail.) 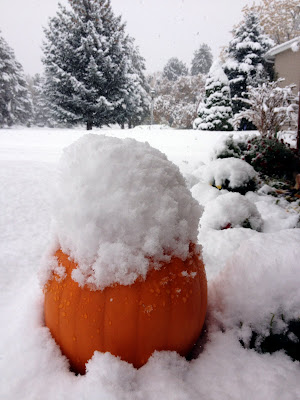 My last post mentioned that we had a few snowflakes.
The next day we had quite a bit more than a few flakes.
A good four inches fell at our place...and today?
It is well over 70 degrees!
I sat on the deck and wondered if I needed to put on shorts and apply some sunscreen! 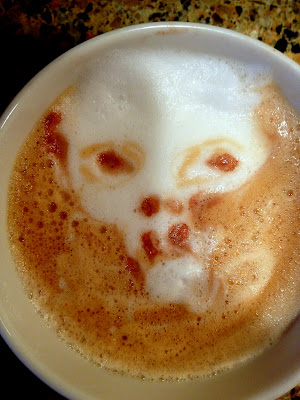 Since the "in person" party isn't happening, consider this our catch up session.
This morning I made a skull motif latte.
Have you seen all the youtube latte art videos?
They are creating wonderful designs on not only coffee but on tea and cocoa too. 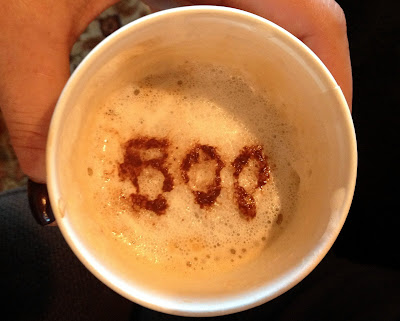 An easy way to dress up a cuppa:  Cut a stencil and shake cocoa over the froth, then use a toothpick to open up areas or move the lettering around.
Pumpkin Spice latte cup for my DIL as she dropped off  Luke on her way to work. 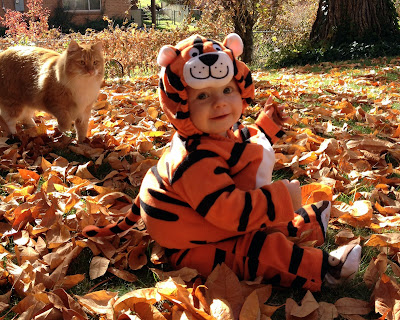 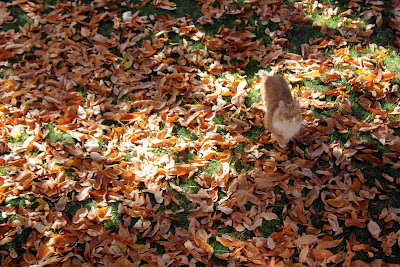 Tate is either evolving into or from leaves... 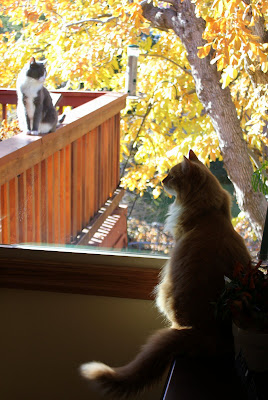 There seemed to be cats every where today...and who can blame them for wanting to be outside with the nice weather. 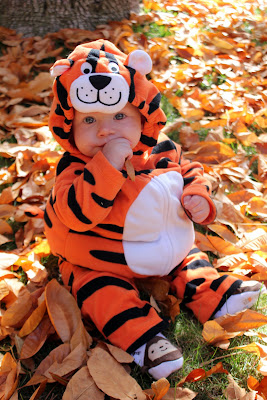 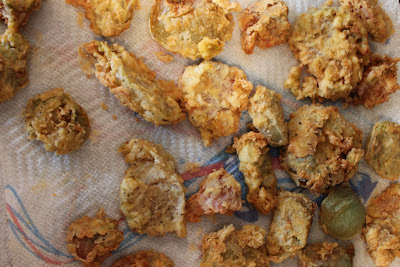 New subject:  The first day of snow last week was to be followed by warmer temperatures so I didn't bother to pick our tomatoes.
My bad.
The next night it did freeze and so I had to quickly harvest the last of our tomatoes which had suffered some frost bite.
What to do...what to do...
Especially since Bernie is out of town and I certainly can not eat that many tomatoes by myself.
Now I have read about *some* bloggers being "meh" about fried green tomatoes.
Especially ones that are fried with a coating of corn meal. 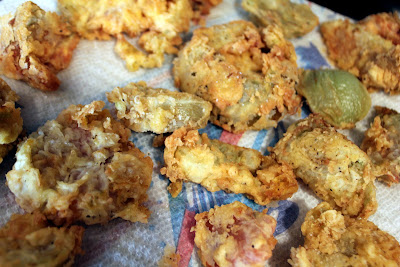 I totally agree with their reaction.
The way I do fried green tomatoes:
Make a milk/egg/mayo mix, about a cup of milk, two eggs and tablespoon of mayonaise
Dip the tomatoes in that, then into a flour/salt/seasoning mix. 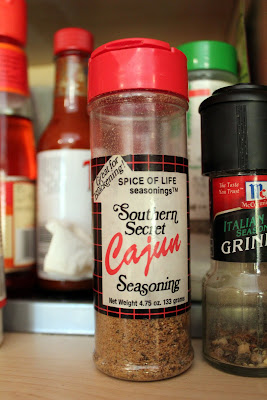 I highly recommend this particular seasoning, but an Italian mix or just plain salt and pepper combo works too.
What ever seasoning you like will work.
Then I deep fat fry them until they are tender.
Delicious!
And they can be zapped back to hot in the microwave or popped in the oven later if you make too many.
(And resist eating them all...) 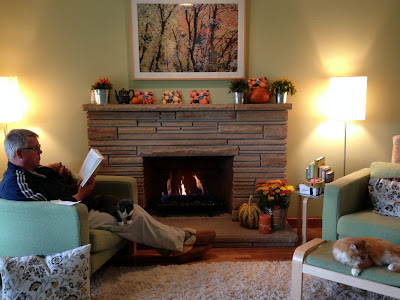 Another new subject:
Over the past four years I have posted lots of photos of our living room.
You might remember that we have apple green chair and couch upholstery and birch wood.
The idea was to have an airy space that was modern and easy to live in, with minimal details.
Well...I was quite happy with that.
But...
The upholstery faded badly.
Good news was that I was able to haul the upholstery back to Ikea and they issues me new covers, explaining there had been a dye lot issue.
So about a half a year ago we had brand new covers again.
Which faded...again.
Turned out that there was one particular lot of Karlstad frames that had received a flame retardant that caused fading of just the green and the brown slip covers.
This time Ikea issued us new frames and new covers.
The bad news:
The green covers are no longer available.
AGgghhh!
Nothing like having to pick a second choice when you really liked your first choice. 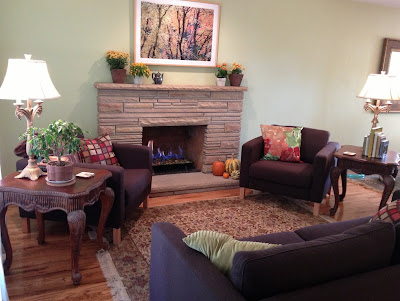 The good news:
I think the brown works well.
We used to have a white wool shag area rug that was twice the size of this area rug but I didn't want the white fur fuzz transfering to the brown upholstery.
The birch end tables looked whimpy against the brown, as did the steel/paper shade lamps.
I switched out those items for the rug that originally was in our entry way in Houston and has been in our library/wine room here.
The end tables and lamps that used to be in our Houston living room have been in our downstairs storage area since we moved here.
Too fussy... 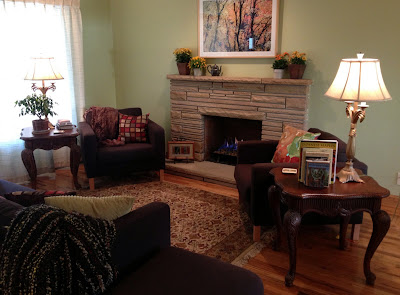 Well, I guess I am ready for a bit of fussy again, because I like them with the brown!
A quick trip to SteinMart for some colorful pillows (which turned out to match our wall green perfectly!) and the living room re-do was done. 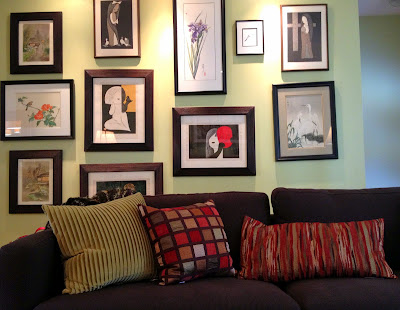 I think the brown upholstery sets off our Japanese print collection quite nicely too.
They are interesting...
I never would have chosen them personally but they generate a lot of favorable comments from our guests, especially the 20-30 somethings guests who think we are quite hip for owning them.
Truth is: They were collected by Bernie's grandmother back in the 1960s!
She lived in Guam and used to hop over to Japan with friends to shop.
She was quite flamboyant and artistic...the modern Japanese style struck her fancy.
Bernie had admired the two brown toned prints (the madona and the girl feeding birds) so she willed the whole collection to him.
We inherited them about five years ago....back when we lived in French country style house in Houston where they really didn't "go".
We would never have guessed that a year later we would be living in an 1950's modern style ranch house and the collection would be just perfect for a large wall in the living room area. 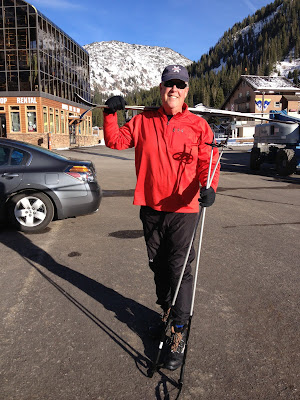 And for the record...last Sunday Bernie skiied for the first time of the season.
Posted by Thoughts on Life and Millinery. at 3:50 PM 10 comments: