Sometimes I just have to laugh...

Liking this one this morning:

It just screams "Librarian!" doesn't it?

With all the floods in Iowa and Washington DC, wild fires in Russia and Canada, and a Mosque being built next to 9/11 ground zero with NYC Port Authority's blessing (while the nearby destroyed St. Nicholas church has hit so many Port Authority roadblocks that they finally gave up on re-building) I thought I should go out of my way to find some good news:

(Stop reading here if your funny bone is out of commission this morning.)

A brave soul has decided that the Muslims should "put up or shut up" about being so all about Peace and Getting Along.

His plan: To build a Gay Muslim bar next to the mosque.
(In case you missed this little detail: Quran/Shariah law demands that homosexuals be put to death.)

Which leads us to the next step in this process, a step that is challenging for all new business owners: What to name it?

OK...I know...I should be offended by this.
This really isn't funny.
I know I shouldn't be laughing.
I just can't help it!

(Thanks to Ann C. for gathering these names from various sources...and there are possibly more to come: stay tuned!)
Posted by Thoughts on Life and Millinery. at 9:19 AM 2 comments:

My ugly black and gray work phone has died again. Last time it died, (last month) it was out of action for a month.

I am requesting a new phone.
One like either of these:

And I'd prefer it if it could be hooked up next to my bed.
(Just to get back to being light and airy after yesterday's post. Did you read it?)
Posted by Thoughts on Life and Millinery. at 9:58 AM 4 comments: 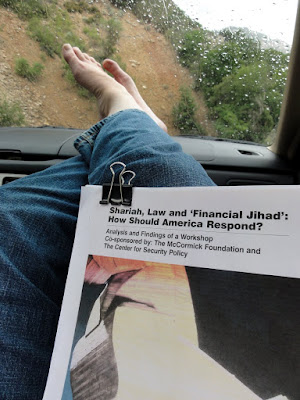 Sharia or Shariah law (both spellings are acceptable) is the theoistic law embraced by Muslims, given by Allah in the Quran.

Islam aims to have EVERYONE in the world abiding by Shariah Law.

Shariah is to be an institutionalized legal-political-normative doctrine and system.

Under Shariah, it is a fundamental crime for a Muslim to adhere to a secular law that does not make clear that Shariah is "the highest law of the land."

If a Muslim considers a secular law to be the highest law, even if the secular law allows Shariah adherence, he or she is subject to capital (put to death) punishment.

Shariah is the source of the command for faithful Muslims to practice jihad.

Peaceful Muslims interpret jihad to mean to "struggle" against their own personal sins or temptations.

The authoritative interpretation is to make a "just" war against non-Muslims and Muslims who have gone astray. Shariah compliant Muslims must engage in jihad to bring about global Islamic rule under a caliph (Islamic leader) who governs according to Shariah.

Muslims are not to be satisfied with just permission to preach Islam or engage in missionary outreach.

They are instead to "To take out people from the rule of people and put them under the rule of Allah" via Shariah law.

After 9/11 and with Muslim terrorism being reported abroad and on home soil, the use of violent jihad to achieve the Islamic goal (of Shariah compliance) is now well understood.

Not understood: How Shariah law is being used in America's financial sector.

It is important to know that the term Shariah isn't found in the Quran.
In ONE instance, there is the term riba which refers to the practice of usury instead of interest in loans.

In the 1940's an Islamic idealist named Maulana Abul Ala Mawdudi thought the west was encroaching on Muslim religious and national identity (note how often the phrase "Muslim World" is used nowadays. Muslims aim for a global rather than national state of being.)

Mawdudi advocated a separate, self-sustained Islamic order with its own Islamic ideology, politics and economics Once all Muslims "bought in" to this concept, it would be the first step to establishing Muslim rule worldwide, bound and united together through Shariah.

The economic portion was viewed as a necessary tool to underwrite jihad. It wasn't until the 1970's that the Islamic Financial Institutions idea began to jell.

Two things happened that pushed the concept into reality:

2. Saudi-controlled multinational Islamic banks came into being. According to the International Monetary Fund (IMF) by 2005, 300 Islamic banks were active in 75 countries with close to a TRILLION dollars under their management by 2007. (That number does not include dozen of Western banks who now offer Islamic financial products and services.)

In capital markets (banks, investments, etc) "Shariah Compliant Finance" (SCF) means that the particular investment or financial transaction has been conducted or structured in a way deemed "Legal" "Authorized" or "Pure" (halal) pursuant to Islamic law."

Four elements are considered in deeming something SCF:

3. (And this is the Big One!) OBLIGATORY TITHING:

SCF must give 2.5% of their earnings OR MORE in a charitable gift (known as zakat) that observant Muslims are obliged to make each year. The Shariah advisers are often responsible for determining who is to receive such tithing.

4. (This is also HUGE!) OBLIGATORY DONATION OF "TAINTED"REVENUE: "Purification" is required of a Shariah-compliant investment or financial transaction that has been "tainted" with revenue from a forbidden source, whether from interest, illicit speculation (such as trading in commodity futures, which involves speculation) or from a forbidden enterprise (such as pork tobacco, alcohol, pornography, Jewish businesses etc.)

Such "tainted" money MUST be purified by DONATING the money to "acceptable" charities, again, typically selected by Shariah authorities.

The recipients of such money are currently NOT disclosed and the process in non-transparent (they don't have written guidelines as to has the decision is made, or any means of examining the who, how, why, where, when of these funds as they are turned over.)

As mentioned earlier: Shariah law requires the Muslims to engage in jihad to make the whole world and all people become Muslim under Allah, compliant to the Quran and Shariah law.

Specifically in tithing and charitable giving: the money is to be given to jihad combatants (i.e. terrorists) and their families (e.g. support the families of suicide-homicide bombers.)

In 2008, oil prices were over $120 a barrel, as I write, the price has fallen to just a bit over $80 a barrel. In 2008 more than a trillion petro dollars were available for global investment, and roughly between $400 billion and $1 trillion dollars are being placed in a SCF program.

Would most western banks like a piece of that action?

Yes! While most SCF has been in non-U.S. western institutes, SCF is being offered in U.S. companies as "socially responsible" or "Ethical investing", without much being said about exactly what SCF really is.

Since SCF transactions generate a revenue streams-notable via zakat and/or "purification-that migrate to Islamic "charities", investors should be informed of the recipients and purposes of such funds.

The three largest Muslim charities in the United States (i.e. the Holy Land Foundation, Benevolence International Foundations, and the Global Relief Foundation) have been shut down after the government determined they were funding terrorist organizations.

What terms to watch for when involved with any financial dealings:

Third quarter 2007 showed a growth in SCF bonds of 110.7 percent over the previous year.

SCF allows for reverse money laundering: legitimate funds are moved into U.S. domestic businesses via SCF, then those funds are diverted to domestic or overseas charities and organizations, some of which have ties to terrorism.

Such transactions are very difficult to spot unless governmental regulators already have the specific recipient charities and organizations in question under surveillance.

A case study about Caribou Coffee where a young couple started the business, then decided to sell 84% of it to Crescent Capital Investments, Inc. CCI was owned by a Bahrain-based investment bank called First Islamic Investment Bank, (later called Arcaptial Inc) which was funded by wealthy Arabs.

Eventually all kinds of investigations lead to a lot of issues. I will not go into the issues, but simply put it is very difficult to get around Shariah advisers to get to the bottom of what is going on with the "tithe" and "purification" of earned monies.

Bottom line: Whenever financial involvement happens, be on the lookout for SCF, Islamic, Crescent, or other Islamic/Arabic/Saudi involvement.

Remember: Islamic Shariah does not submit to any other law than itself; and by definition, has but one vision: Converting the world to Islam and eliminating anyone or anything that will not submit to Islamic leadership.


Summary of "Shariah, Law and 'Financial Jihad': How Should America Respond"
Full text at: www.mccormickfoundation.org/publications/JihadReport.pdf
Additional sources can be found by typing Shariah Compliant in google, add country, state etc.
Interesting reading: http://www.jihadwatch.org/
Posted by Thoughts on Life and Millinery. at 1:46 PM 2 comments: 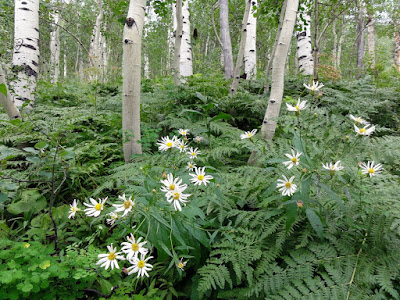 The temperature was perfect for being outside this weekend, so B. and I loaded up and headed out to enjoy. 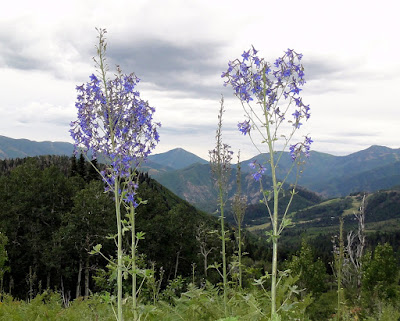 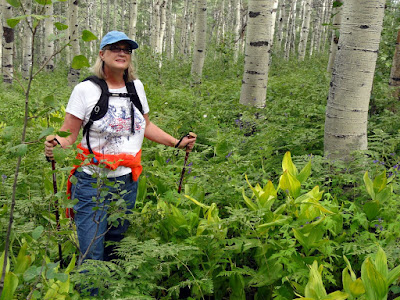 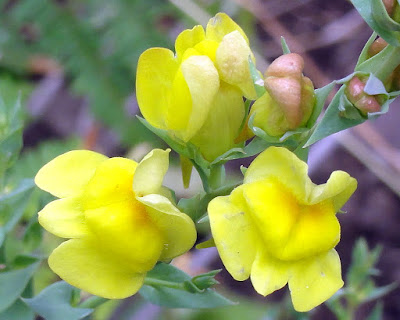 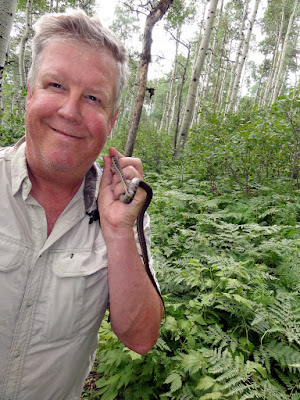 He caught a snake. 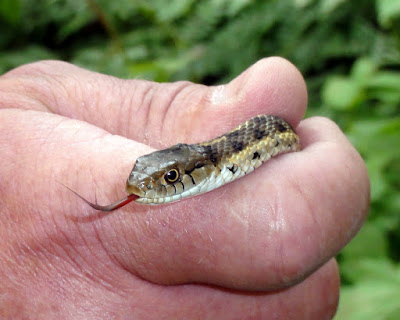 (I'm not fond of snakes, but this little fellow was kinda cute.) 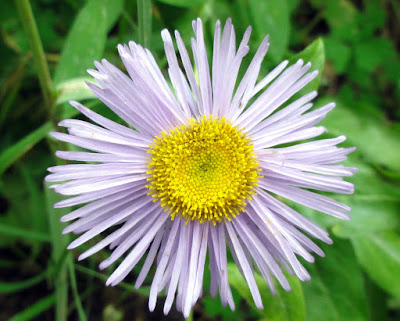 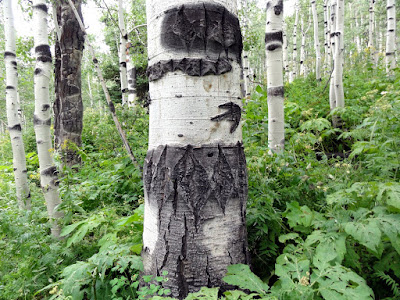 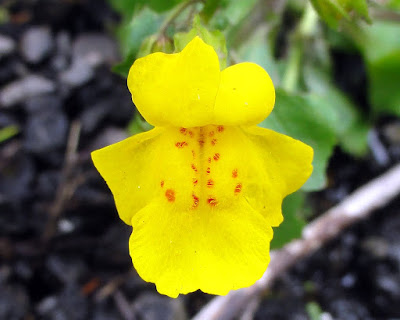 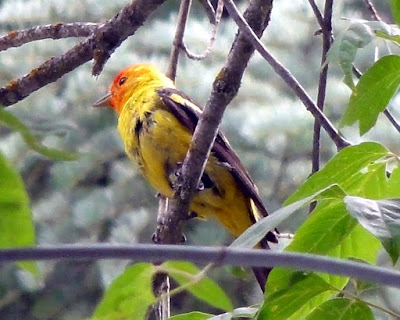 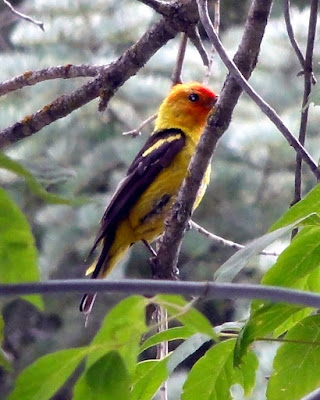 and was thrilled to have a Western tanager visit over head. 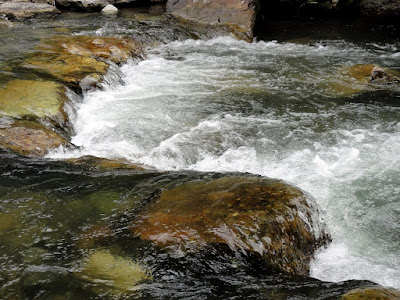 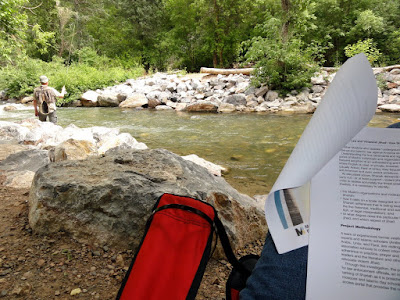 Bernie fished (didn't catch anything) while I read on the shoreline. 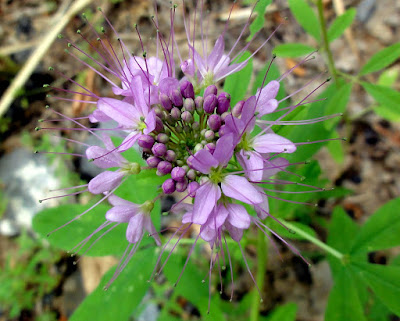 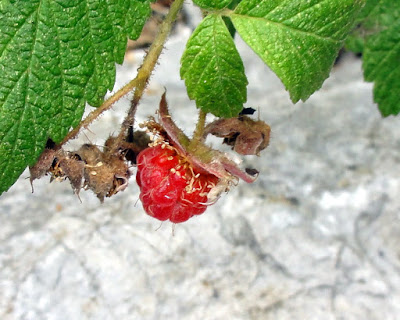 I picked a few tiny berries for a snack. 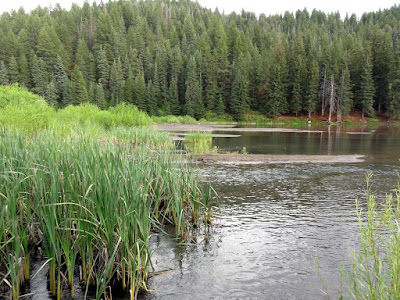 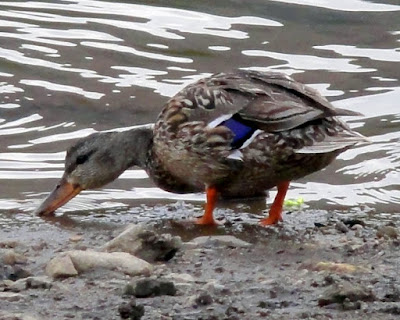 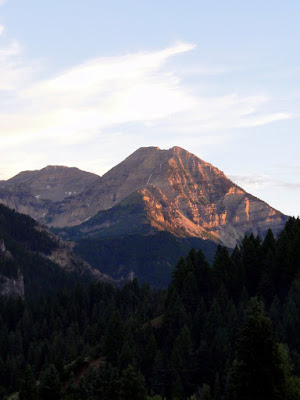 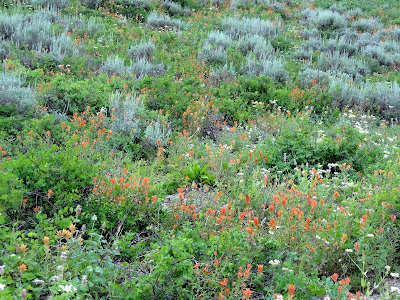 Sunday, late in the day, went for another drive over Guardian Pass. The meadow colors were great, and a different mix of flowers than we saw just four weeks ago. 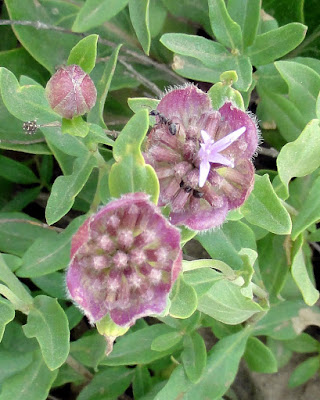 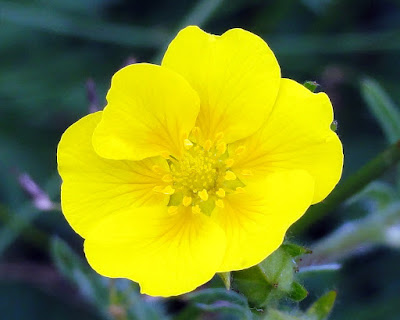 Penny sized flowers are so gorgeous up close. 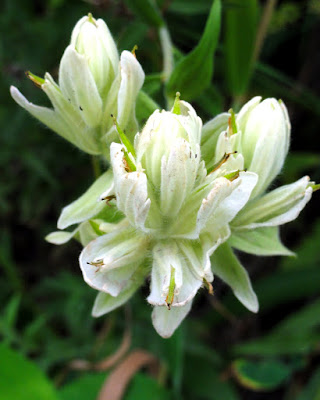 The white version of the orange red Indian Paint brush has its own kind of beauty, don't you think? 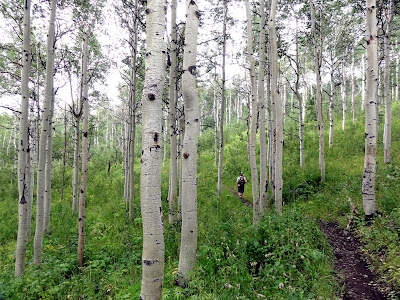 My brave husband, checking the path ahead so I won't be in for any surprises.
(Plus I tend to stop to take pictures which slows me down while he forges ahead!)

A little rain didn't stop Bernie from fishing, but I didn't care to get wet.
I'm doing a little reading...much to heavy to talk about first thing on Monday morning.
Tomorrow I'll try to give a brief summary of what the reading was all about.
Meanwhile...Happy 8-9-10!
Posted by Thoughts on Life and Millinery. at 10:58 PM 9 comments: