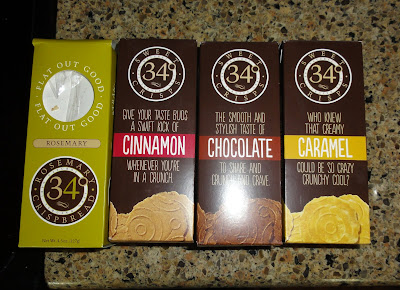 So have you discovered these things yet?
I sampled the caramel ones at Whole Foods and was instantly hooked. 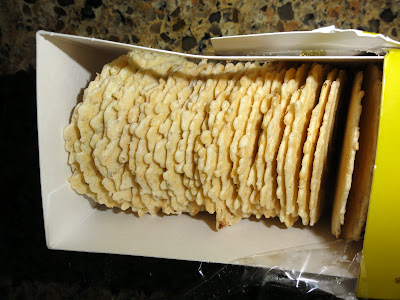 They are crackers...or perhaps wafers is a better term. 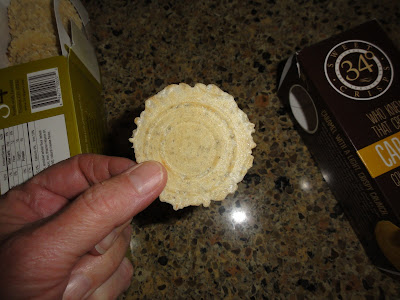 Something like ten calories each.
May I just say that a smear of goat cheese and a sliver of honeydew melon on the caramel flavored ones is to die for.
Goat cheese and strawberry on the cracked pepper variety (not pictured) is awesome.
A dab of this and that and let your imagination run wild...
The Chocolate wafer with a smear of whipped marshmallow and a raspberry.
Rosemary wafer with cream cheese and watermelon.
Cinnamon with a peach slice...or banana and peanut butter?
All of them are delicious plain too.
Sometimes I just want a munchy cookie to go with my milk or ice tea or coffee.
Four wafers or maybe five work to fill the need.
Just passing the tip along.
And trust me...the caramel is crazy good if you are a fan of caramel.
Tastes like someone make a caramel into something crunch.
In fact, at first taste I thought they had melted a caramel and kept melting it until it got crispy.
Hope they sell them near where you live!

Posted by Thoughts on Life and Millinery. at 3:20 PM 5 comments: 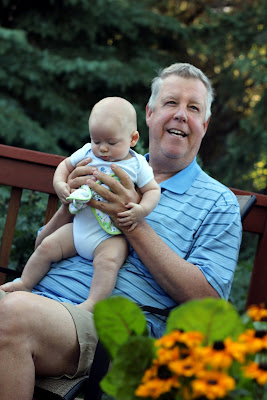 So here it is, the second day of August.
(Be prepared...not a lot happened today....)
Luke was dropped off at 8 am.
Bernie and I had coffee out on the deck while it was still cool. 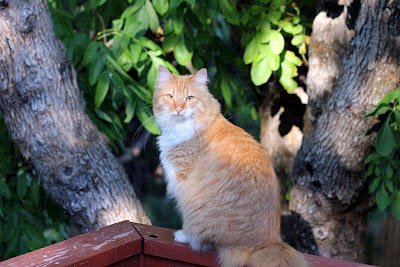 Tate joined us too. 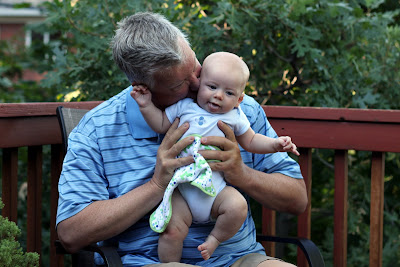 Luke got scratchy Grandpa kisses then Bernie went to work in his office downstairs.
The rest of the cats went with him. 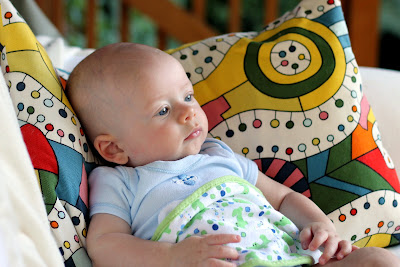 Luke kicked back for a bit, then we tried swinging in the hammock.
Usually he falls asleep that way.
After he woke up, Bernie and I harvested green beans, yellow beans and purple bean, broccoli, tomatoes, and one white eggplant from our garden.
(Am I boring you yet?)
The three of us played a round of "Bowling for Cats".
That involves tossing the apples that have fallen from our apple tree across the lawn for whatever cat is in the yard to chase.
It really is a fun game.
Especially when you aren't sure exactly how many cats are in the yard while you are doing it.
Sometimes neighbor cats join in the fun, exploding out from under bushes to chase the apples flying along. 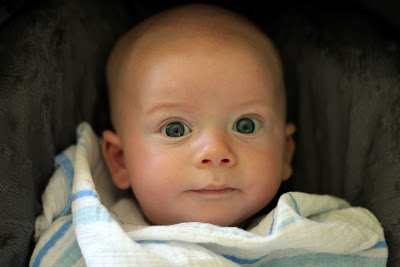 Luke took another nap then we three went to the airport to drop Bernie off.
He's in San Diego for a couple of days. 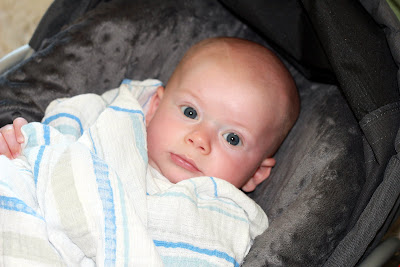 I drove up Mill Creek Canyon while Luke took another nap on the way home.
He got fed, then we visited with the 3 and 2 year old girls next door for a bit.
Jeff came by and collected his boy.
I went outside again...alone this time. 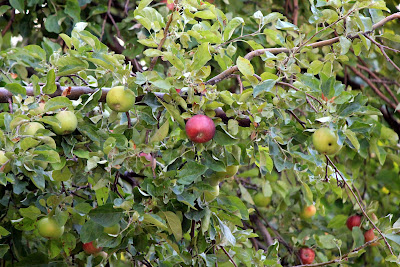 The apples are weighing heavily on the tree right now. 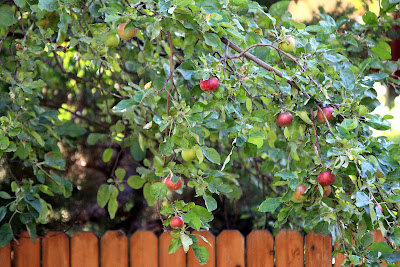 Seems like an awful lot of them are falling off the tree while just a bit larger than a golf ball.
The ground is littered with red globes that add color to the shady green garden beneath the tree. 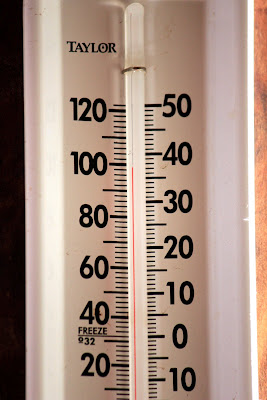 Around six pm.
I swear it has been topping off at 100 degrees ever since June 1st.
This totally demotivates me.
(I got gardening done early yesterday morning and after that and a trip to Chick-fil-a, little else was done). 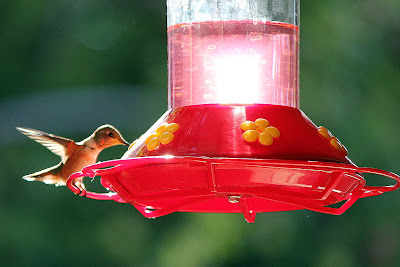 For awhile I sat and tried to photograph the hummingbirds that feed every few minutes. 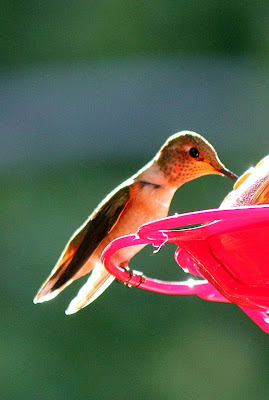 I've taken better hummer shots with my point and shoot camera.
After a few minutes I decide it really is too hot to stay outside to do photography. 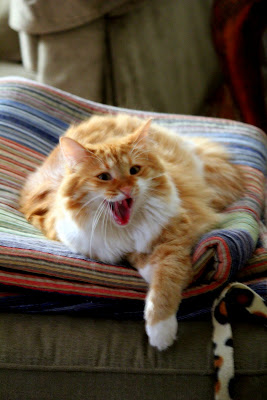 Heading downstairs to the computer where it is much cooler, I wake Tate up.
He yawns... 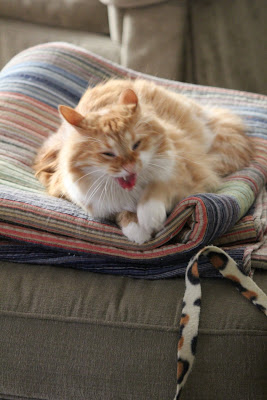 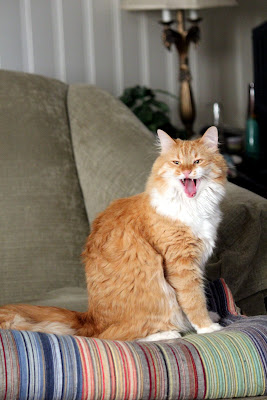 And yawns...
(He actually yawned six times in a row.  Too bad a cat's yawn isn't really very cute.) 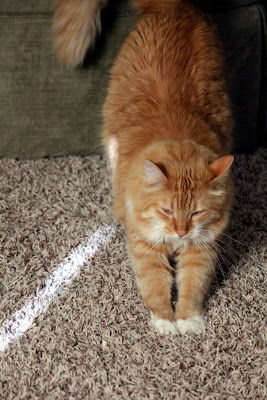 Eventually he got off his blanket and took a stretch before going back to sleep...this time on the floor. 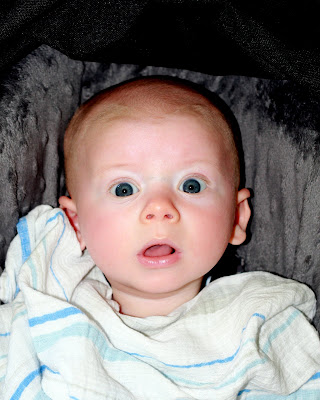 Are you shocked at how boring a truly lovely day can be?
Dog days of summer are here.
So what exciting things are you doing?
Anything?

Posted by Thoughts on Life and Millinery. at 6:54 PM 8 comments:

Grin and bear it: Smiling facilitates stress recovery
I have read other articles about how the physical act of smiling give positive results to the brain, and helps create a more happy feeling.  I also figured that if a face would muscle train into a smile instead of a frown or scowl (I scowl when I am not thinking about anything in particular...) the happier version of the face would be more welcomed.