Baptisms, Snow and Rock and Roll

The days had gotten warmer the last few weeks and all the snow was melted in the neighborhood.
Yesterday you could see all the grass in the front yard for the first time since November. 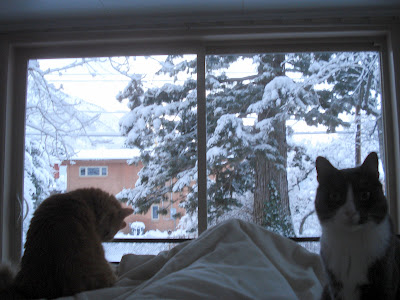 A wintery view again.
I LOVE waking up to a view of winter wonderlands first thing in the morning.
And views with cats too, of course. 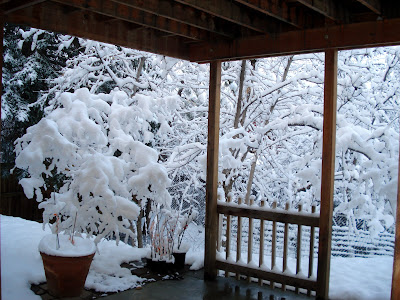 Such a new experience for me. 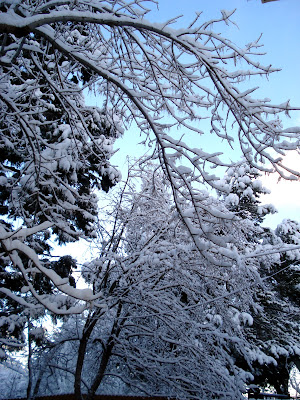 I wonder if I will eventually take it for granted. 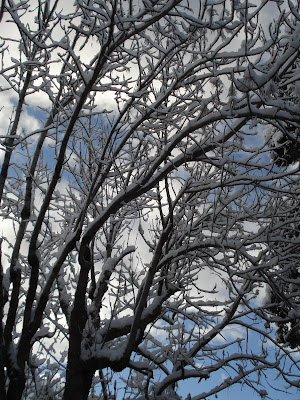 I've never been one to not make a picture in my heart and mind of wonderful things every chance I get.
Snow is a wonder for today.
Another wonder is seeing family on Youtube.
Our son's baptism for one.
It is a pretty long video, but you can see and hear Jeff talk about his faith (at the 1 min. 26 second mark) see Rachel and him arriving (at 9 min 13 sec.) and see him go under the water and come up again (at 11 mins.) , along with others who partook of that sacrament on that Sunday afternoon.
The other is revisiting a happy memory from long ago...from a time when MTV was a brand new channel on television.
It was 1983.
The kids were 3 and 5, and I did NOT want them to be watching bands like Alice Cooper and Kiss rocking out.
But...
suddenly...
their Uncle Mark was playing drums on a video that was on rotation on the channel.
It was a pretty darn cute video too.
We let the kids watch their Uncle's band, of course.
And turned channels immediately afterwards.
The video is now on Youtube, and seeing it again brought back SO many funny memories.
You see, lil' bro Mark was a serious professional drummer for years before becoming a Radiology Therapist. He played with several bands and was cited in Rolling Stone magazine as one very hot drummer.
Drummer praise doesn't come from a source higher than that!
During the years that the incredibly talented and handsome Mark was on percussion, his big bro Bernie was juggling being an electrician, going to school at night, and being a daddy to two little kids.
Once, during that season of life, when we were over at Mark and Bernie's parents house, my MIL turned to Bernie and asked him if he had had a chance to go see Mark performing in some local venue.
I can still remember how hard it was not to laugh when Bernie dryly replied:
"When Mark comes to watch me at my work, then I'll be going to see Mark at his work."
(I'm pretty sure Mark never did make it out to watch Bernie at his construction site...)
By way of updating those who wonder how Mark is doing...he is home now, and struggling to recover from the massive abdominal surgery he had two weeks ago. Several organs were removed, but they were not able to get all the cancer...he will begin intense radiation and chemo as soon as they can identify exactly the kind of cancer he has.
We think about Mark all the time...sometimes with worry, sometimes with fear, and sometimes...well, you know some 50 plus years of being a big brother is hard to let go.
As soon as Mark came out of surgery and we knew that he was OK, I mentioned that he must have a massive abdominal scar, similar to the one that I sport on my low belly.
Recalling the inquires I faced after my surgery, I voiced a similar concern to Bernie:
"Do you think Mark will still be able to wear a bikini style swim suit?"
(like he EVER did...)
To which B. replied without missing a beat:
"No, he doesn't have the guts for it anymore."
Somethings in life, like capping on your little brother, just never change.
Posted by Thoughts on Life and Millinery. at 8:41 AM 7 comments:

My husband and son both pointed out to me that having a dirty car in snow country is not the same as having a dusty car in tornado country. There are chemicals on the roads here that melt the ice and the resulting filth needs to be washed off regularly.

Where I grew up and raised my kids in San Diego I found it refreshing to wash my own car in the driveway; the weather there is always perfect 365 days a year.

But here in SLC it has been too cold outside to do that; my car could be a block of ice if I gave that a shot. Knowing that fact meant I had to go and try to find a car wash some where in my area.

Part of being new in town is that you can't remember where you have seen a car wash...and when you do see one, it is inevitably on the wrong side of the road or the wrong kind of carwash.

The wrong kind of car wash for me is one where you put change in a machine and wrangle a sprayer all by yourself. The "right" kind for me is the kind that has all kinds of whirling brushes and flapping strips.

I do know some people blanch at the thought of going through one of those kinds of car washes.(Hi Terry! Happy Anniversary!) They insist (correctly) that such car wash treatments leaves swirl marks in the car's gloss coat. 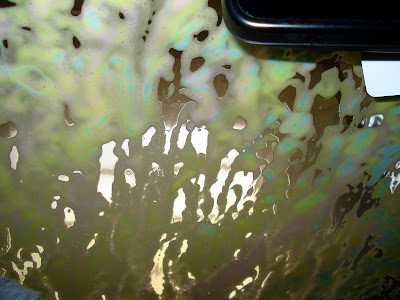 For awhile I worried about that too...and used the "touchless" car wash systems, only to discover that touchless systems are designed to wash the dirt and leave it neatly in place.

Well, to appease my menfolk, I made a reckless U turn when I saw an available car wash the other day. As I steered my car into the wash bay, fond memories came flooding back to me of another place and time.

Back to when I was a mother of two rambunctious and often quarrelsome children, and friends with women who were likewise deep in the process of child rearing.

Across town (a ten minute drive in little La Mesa suburb) there was a place where you could fill up with gas, and for about a dollar more, you could go through the brush and flap kind of car wash.

Sometimes when the kids were just about to drive me wild, I would simply ask: "Who wants to go through the car wash?" and it was just like I had announced a trip to Disneyland.

The kids would pile into the car, and as the water sprayed on the windows and the brushes whirled closer and closer, the sounds of the car wash would blend perfectly with the screams and squeals of the kids.

Sometimes, when I was really, REAALLY needing a break, I would pay for us to go through twice. And sometimes...I just remembered this...I would get out of the car and let them go through the wash without me! 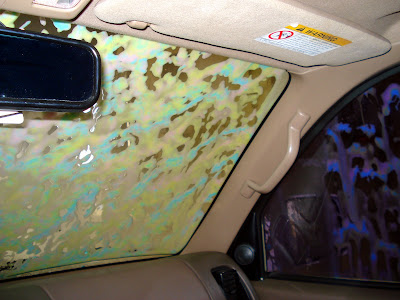 Salt Lake City is one kid friendly kind of town.
Proof: At the car wash here, the sprayed on soapy lather slopped on in rainbow colors.
It was lovely.
And if it hadn't cost so very much more than a car wash used to, I think I would have gone through it again.
Not screaming...just smiling a bit before heading back to my busy day.
Posted by Thoughts on Life and Millinery. at 7:23 AM 2 comments:

A 1950's GE pink oven going on Ebay for $200 right now.
Shipping is also $200.
If they would throw in the range top over to the side...and those cool retro tiles, I think I could go right over the edge and buy into 1950's the pink kitchen thing. 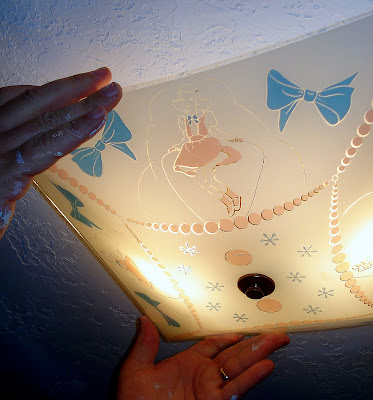 Let's look at what it would mean to head back to the 1950's.
(Pictured above: the 50's light diffuser that won on ebay and that is now installed up in our blue guest room's ceiling, just for fun. Loving that little girl with a blue hair clip jumping rope and scattered ball and jacks on the bottom. It takes me right back to the 50's just looking at it up there!)
Back to when Ike was in charge. Under President Dwight Eisenhower the gross national product grew by over 25 percent and inflation averaged 1.4 percent. 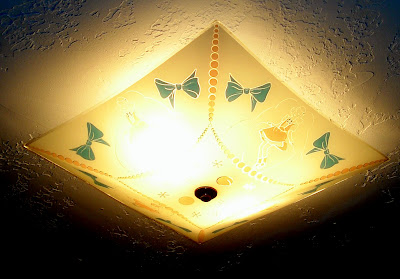 Not bad statistics...not bad at all.

The idea of retreating to the 50's has been fully embraced by one blogging woman.
She has decided to go live in the year 1955, and to post about her experiences on her blog called My 1955 Year
She reads publications from the time, wears the clothes, cooks, cleans, the whole nine yards, each day of her life as if it was 1955.

And get this: she is discovering how WONDERFUL it was to live back then. She even makes me long for Pinesol cleaner again!

She posted two days ago about "household drudgery" and was astonished to report that housekeeping in 1955 was ecologically sound and not nearly as time consuming as our modern efforts are, with better results! And yes, she does go about her housewifely life in a girdle when she isn't scrubbing up things in jeans and loafers.

I've added her to my sidebar if you wish to following her life this year. She doesn't have a pink kitchen, but as far as using the '50s as an escape from our current trauma, I think overall she will do.
Posted by Thoughts on Life and Millinery. at 9:11 PM 6 comments: 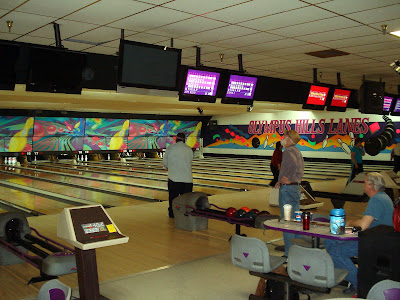 Quote of the Day:
How much will each American family pay, on average, to bail out the beleagured insurance giant American International Group (AIG)?
Answer:
Try more than $1,400.
Source: ABC news
Picture above taken at the bowling alley two block from my house.
Posted by Thoughts on Life and Millinery. at 12:43 PM 4 comments: