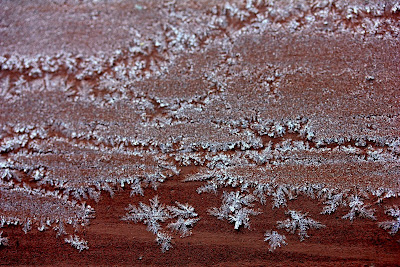 There was fabulous frost forming everywhere the morning we left to drive to San Diego. 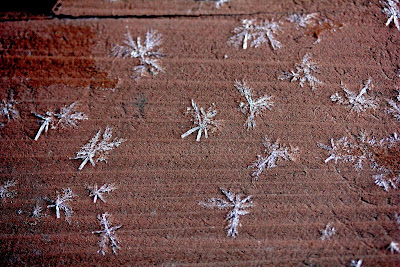 I had packed the night before; Bernie had some business to attend to.
We would leave sometime in late morning, which scheduling allowed me a  small window of time in which to enjoy the scattered frost spangles before departure time. 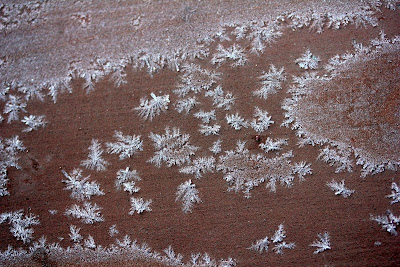 So which is it:
Lace?
Embroidery?
Fine jewelry? 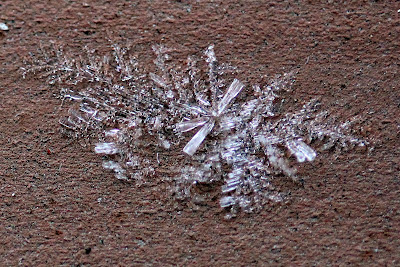 I thought this design looked particularly like a diamond brooch.
Nice use of baguette shapes, God. 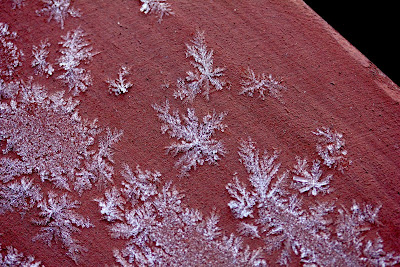 It would have been even better if I had take the time to set up tripod and paid attention to settings while I was taking the shots.
I just wasn't sure when Bernie would be done with his conference call so I kept the photo shoot simple. 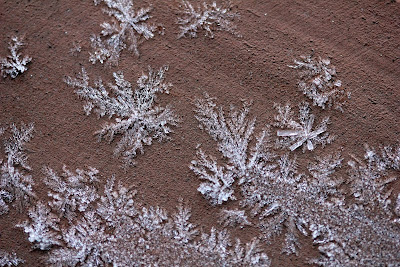 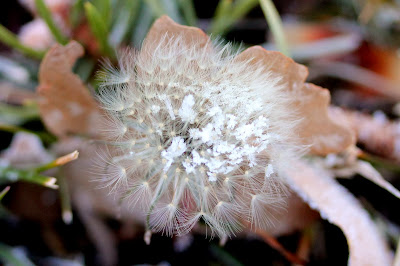 Frost again this year on dandelion puffs?
Well, who can say. 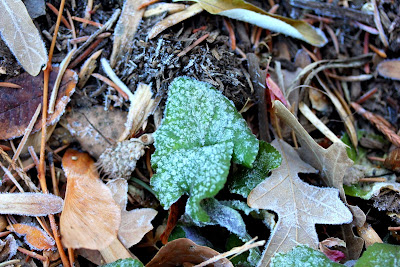 I suspected that this might be the last of green + frost for this year.
Winter will come to Salt Lake while we are gone. 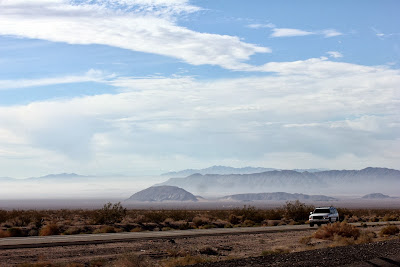 Then we were off, driving south and west, through the desert valleys where fog lingered late in the low areas. 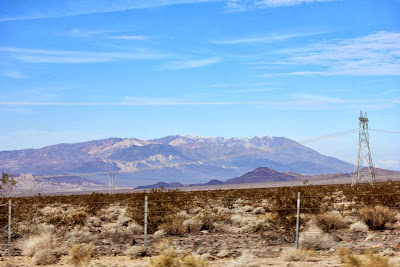 It is a lovely part of the drive back home.
A night was spent in Las Vegas, breakfast was consumed and in the morning we were on the road once again. 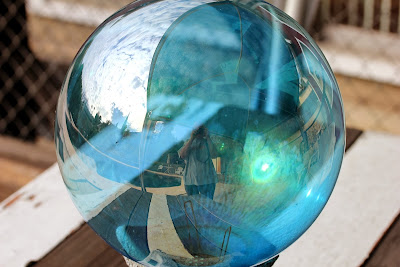 Each trip "home" is different and yet the same.
The feel of the visit changes slightly each time.
We lived in San Diego for "all our lives", that is, all our lives, up until fifteen years ago.
My parents, and Bernie's remaining parent, his Father, still live in San Diego.
As long as they are there, San Diego still is home. 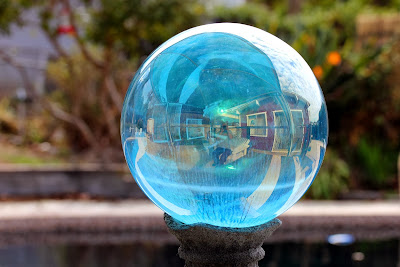 My focus, emotional and visual, ranges between old familiar territories and spaces, and new territory, places, spaces which beckon me to come explore. 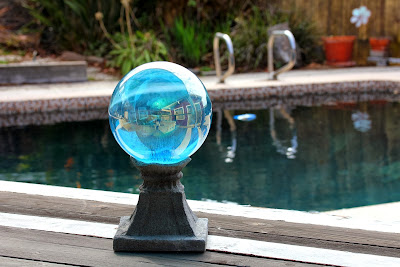 Something as simple as a garden globe reflects the house that Bernie grew up in, and where I conceived our son and where we raised our children for four years...
I am that twenty something woman raising those babies again in my mind.
That baby boy who is now bringing his own baby boy over to the house to visit with Bernie's father, the boy's grandfather, the baby's great grandfather.
I am the young mother.
I am also now the grandmother.
In the layers of focus, I am both. 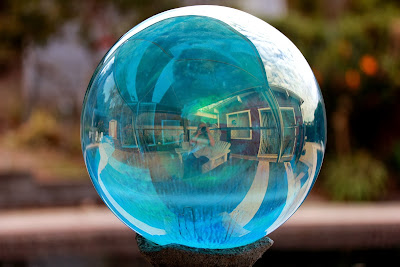 The visual image is as layered as my mental image is of all that this time and place holds. 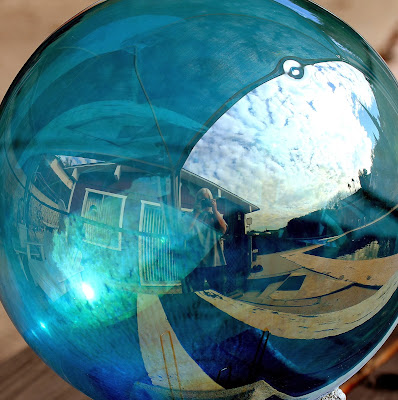 I am in the center of the picture...the sky, the sun, the house, the pool feed me memories of years gone by.
Like all memory places, the mental reflections are also layered around me.
Getting perspective takes time, truing the perspective takes longer. 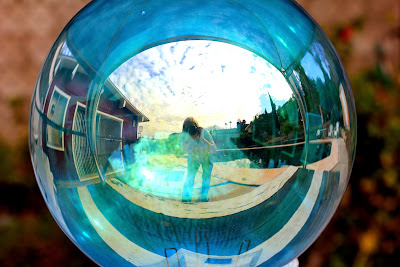 I enjoyed being outside in the late autumn sunshine, while also ruing the fact that once again, I had neglected to heed the inner voice of wisdom that suggested I bring along a tank top and shorts when I packed, even though the weather channel claimed San Diego would be unseasonable cold.
I borrowed a tee shirt from Bernie to wear.
It flaps around me, hiding my form as I lean into the outdoor space. 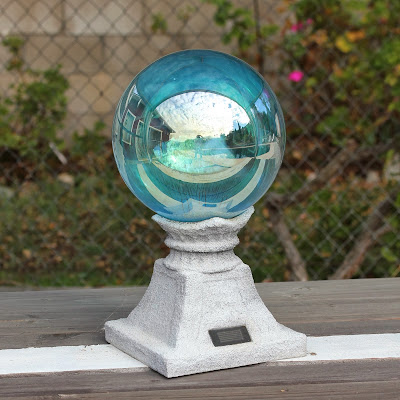 Standing back, I mostly see the sky reflection. 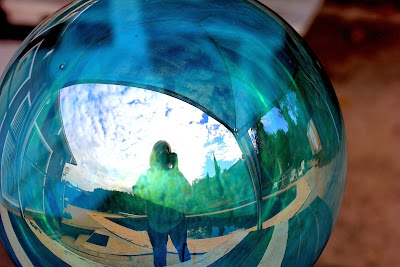 What will I and my camera find to capture this trip?
Which memories, what milestones will this visit present? 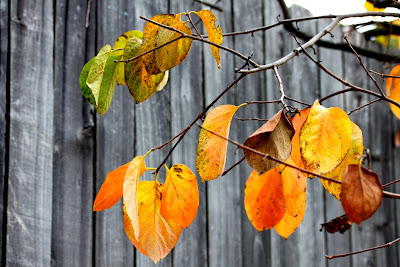 In San Diego, it is autumn still.
I am in San Diego, a place where it seems that winter never truly comes.
Posted by Thoughts on Life and Millinery. at 8:07 PM 4 comments: