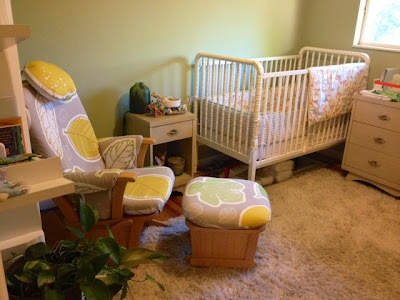 The room that was designated to be Calvin's nursery has a single north facing window.  A Japanese maple wisps at one side of the window and the walls had been painted a compatible shade of green when it was originally made into a home office five years ago, back before the family circle had included wee offspring.

Rachel made the decision to keep the green paint as she began to re-design the room as a nursery. She also did some thinking and decided to go with a new white crib and mid century modern blonde furniture to keep the room as light as possible. 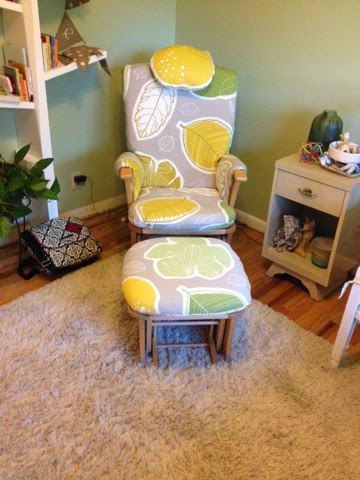 Originally the nursery's rocker/glider and footstool had been covered in a washed out yellow fabric. That had worked with Luke's nursery colors but Rachel wanted something more exciting color wise for Calvin's room.
She found an on- line tutorial on how to re-cover rocker gliders and asked if I would be willing to take on the project.  I agreed and we trooped down to IKEA to look for some fabric that would give the room a pop of bold design and color while still keeping with a forest/tree/mid century modern vibe.
I think her choice of fabric nailed it!
The stylized white tree shaped book case next to the rocker was hand crafted by a friend as a gift to a Calvin. 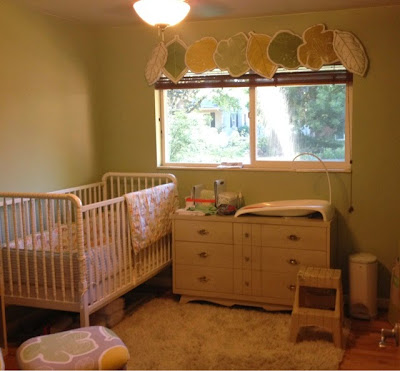 With the shaggy natural wool rug and furniture in place the next decorating question was concerning a window covering.  I suggested using the leaf shapes cut out from the upholstery fabric. The leaves were sewn into small pillow shapes that were slightly padded with quilt extra high loft quilt batting and a bit of fiber fill.  A line of stick on Velcro was applied to the wall and regular Velcro was sewn onto the back of the over lapped leaves.  Sewing the window treatment took me about as long as it took to re-do the rocker!  Funny how that works with sewing projects.
A pen and ink/water color print in an ivory white frame, a picture of a safari from Rachel's childhood home and a few other small bits of art on a ivory white art ledge will be completing the room this week. 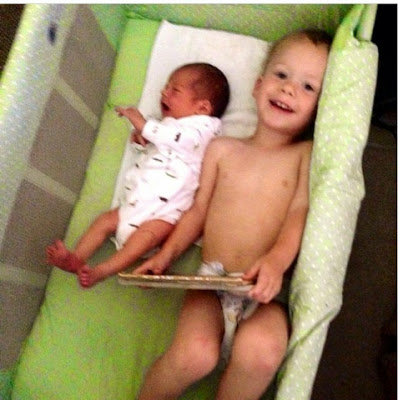 The nursery isn't being used much right now any way except for baby dressing and diaper changes.
Calvin for now is sleeping next to his parent's bedside in the same portable style bassinet crib that his big brother used when he was tiny.
Luke doesn't mind letting Cal use his old bassinet crib at all. He  climbs into the bassinet himself from time to time just for old time sake.
Brother bonding in bed time...I think they both are enjoying it!
Posted by Thoughts on Life and Millinery. at 10:30 AM 5 comments: