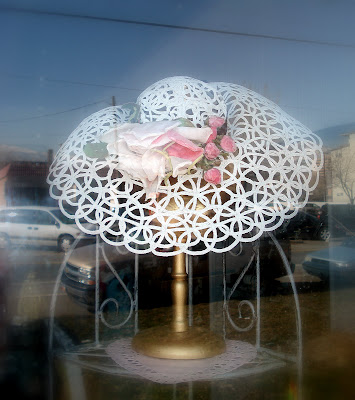 This sweet little lacy straw bonnet was on display in the window of the antique store I pass every day on the way to work. It took a couple of days to find the time to go inside the store AND to find it open all at the same time. The store has a sign out front: "Open whenever I am here-The Management." Her schedule and mine rarely match!

The tiny braids of straw were in perfect condition, and the flowers would revive nicely with a touch of steam. Sadly it was a 21 inch crown, and my noggin is a 22 3/4 inch size. It was tempting to buy it just for display, but really it deserves to be worn to a lovely garden tea party, with gloves and a frilly frock.

I took this picture a few weeks back, thinking it might help inspire some hat wearing this Easter and Springtime.
At the very least it has now served to get my mind off the news for a moment.
I might just start wearing frilly hats with a pin that says "I'm not going to worry my pretty little head about anything-I'm going to use it to wear a hat instead!"

Wouldn't that at least be more attractive than sticking my head in the sand during these trying times?
Of course it would!
Posted by Thoughts on Life and Millinery. at 8:34 AM 13 comments:

As the skies are blue after a week of snow, and the trees are spritzed with green bits and a dab of pink flowers, I'm delighted to report that I managed to get the moving box level down in our house considerably, at least in the living room area. No more boxes to the ceiling!

I believe almost all the kitchen boxes have been unpacked, and it is quite apparent that putting my kitchen goods into a kitchen one third smaller than what I had before will require some thinking. Like what do I use regularly, occasionally, and basically never. I'm still perplexed over two regular cupcake pans, one mini pan, and one jumbo pan. Do I need all three of these options? I'm thinking the jumbo pan can go. The hot air pop corn popper? Gone.

We were astonished to find that we owned two entire shelves worth of teas. Now that we have an insta-hot water dispenser, where boiling hot water is always instantly available, we expect to greatly increase our tea sipping. But even if we were to brew up two cups a day, we would still be bogged down in tea boxes.

Solution: take duplicate boxes to work for the break room.

Friday I worked like a dog and got through about 20 boxes. Saturday it was rainy and snowy, so of course we had to run errands. We spent a couple of hours unpacking some more, then headed out around 11 am.

First stop was to an alterations shop, where my MOG dress suit will be shortened and a bit let out in the bust and tummy. I had bought the periwinkle crepe floor length skirted suit about eight years ago, joking that it would be my "emergency" mother of the bride or groom outfit.

I had worried about finding suitable floor length attire for an evening event, as most floor length items actually hit above the ankle on me. This one fit right in all the "length" areas, including the sleeves and jacket length. It was on clearance at Ross or Marshalls, I forget which one, and so I snapped it up and hung it away, knowing that I was "covered" for either an evening wedding or other formal event that required a non-ball gown option.

The long sleeved suit has a scalloped jacket hem, bound in matching periwinkle satin, and has a periwinkle/navy iridescent bead work design just below the fitted waist, just above the jacket hem.

I love how the scallop hem on the jacket looks from the back...and the fitted waistline gives the suit a curvy feminine flair. Periwinkle is a great color, and in this case, a perfect solution to the issue of finding something in a shade of blue. The wedding colors are fuchsia and navy, the MOB is wearing a mauve suit, so that left me trying to find a pastel version of navy.

The alterations lady assures me that she will make the suit fit me just right (a few pounds and post surgery tummy issues acquired since the suit was purchase had made the suit just a tiny bit tight...) The suit was in storage until just a week ago, so I couldn't count on it until I unpacked it.

So whew...I think I'll be OK for the wedding. Now to find some cute and comfy shoes...

We also shopped for glasses (they are now ordered, two pairs, one for computer work, one for regular, and hurrah, the regular pair will do the color change trick so I won't be squinting as I drive in bright sunlight anymore.) We got a light fixture for the bedroom...grocery shopped....and bang...Saturday was mostly done.

Sunday Bernie, Jeff and Rachel hit the powder, skiing in the sunshine, while I unpacked some more. By three I felt I was walking around in circles, and had a sore throat. The kitchen was already oveflowing with stuff, and more stuff was piled on tables, awaiting triage. Thank goodness the skiers returned and piled into the hot tub. I joined in too, then took a nap. Yup...I definitely am not feeling good...the sore throat was glowing away after I got up from the nap.

Five large boxes are now loaded into my car awaiting a donation trip to the thrift store. I'm at work, tired, and faced with two easy assignments, yet all I want to do is crawl back into bed.

Ugh, Monday and a cold coming on.

I guess I was long over due.

PS: North Korea's rocket launch and subsequent total lack of censure by NATO bodes poorly for all of us. The western region of North America is now being armed (I read) to the upsized threat of attack. Sadly, discussions are also occurring of a pre-emptive strike, one that I could almost agree with, except that it really sounds like the hounds of war are being primed as they so often are in time of economic crisis as a quick solution to the financial problem.

Obama's reference to the world's leadership as America as being "proud and arrogant" sounds vaguely familiar. Isn't that what the Islamic fanatics always say about us? If he really felt that way (and his wife has already referred to us as "mean") then why didn't he voice that during his campaign?

And why on earth was the man BOWING to an Arab leader????? In case you missed it, catch it on Youtube here. Just being polite you say? Um...he didn't bow to the Queen of England. Nor did the Saudi King bow in return. Well, at least we now know which world leader Obama feels he must honor, even above his own office as President.
And in MHO: That bow was pretty darn deep for just a polite greeting.
Posted by Thoughts on Life and Millinery. at 9:59 AM 5 comments: