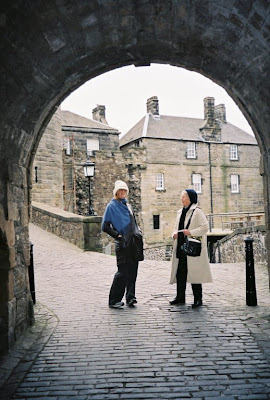 A couple of years ago DD Laura and my MIL Barbara and I went to Scotland for a week. The picture was taken in Edinburgh Castle, in late Feb.

While most people would avoid going to Scotland in winter, I liked it very much. And I LOVED having the three of us together, noodling around Scotland, enjoying seeing kilt wearing gents in the grocery stores, stags along side the roadway, castles and century old cemeteries, snow covered mountains and lakes. And yes, I did try haggis.

I wonder if anyone else out in blogland have ever traveled with their daughter and MIL to a foreign country?

As part of the Meme, I am supposed to tag others to do the same. If the idea appeals to you, or if you are curious about what picture would be the fourth one in your fourth file, consider yourself tagged!

Posted by Thoughts on Life and Millinery. at 7:48 AM 6 comments:

Another anniversary....we sure didn't imagine ourselves living in Utah 32 years after we said "I do" on a bright December afternoon in La Jolla.

Didn't see Texas in our future either. Funny how it is all turning out...
What is really making us laugh is looking at a blog that documents housing interior styles by the decades, starting in the 1950's, back when the Mister and I were kids. We scrolled through the decades, remembering this and that, then when we got to the 1970's, there it was...our first apartment's kitchen.
Or at least pretty darn close to how it looked.
The blog got really interesting when it demonstrated how the sleek 1950's "modern" looks are being found again in the late 2000's. Who knew IKEA was so retro?
The blogger then posed the question: If 2000-2008 is retro 1950's, then will 2010-2018 be retro 1960's? Quite possibly. There certainly are straws in the wind that would suggest that to be the case.
While I toured the 75 houses in my quest to find a house, I was totally struck by how "era identifiable" each house was. I was sure that each house at one time was just the most current and up to date design....yet the elements that were most apparent in indicating the era were also the elements that I found the most repulsive.
I can see how the late 1990-early 2000 Neo-Classic big houses with huge built in niches for televisions already look dated. What in the world will be the next great home feature?
If you like to walk down memory lane a bit, and see the "look" of different eras, you can click on the 1950's or 1960's or 1970's or 1980's or 1990's or 2000's. All the houses shown are in Phoenix Arizona, and it amazes me that my home town had houses that were built exactly like those houses. (The posts begin with swimming pool styles and landscaping, just scroll on down to see what was going on inside those house in the kitchen, baths and living rooms. Some of them are a real hoot.)
I've heard there comes a time in every woman's life when she says "enough" to keeping up, and settles into a certain decorating era for keeps. Eventually I think that look becomes what is known in her family as "looking like grandma's house"...and even great grandma's can remember what their own grandmother's houses had that they thought was quaint at best or hideously out of style at worst.
Us "mid-century" baby boomers wince at 1950 style interior design and decoration, yet I see blog written by 20-somethings who are feverishly collecting what is now lovingly being referred to "Mid Century Modern Design". (Atomic age star burst clocks anyone?)
I'm rambling here, but let me just say that yes, I had the 1980's tulip lamp (and actually made on in green gingham for DD's bedroom) and smiled at more than one picture that brought back memories of friends and neighbors homes. And I laughed at "poof" valences that were stuff with news paper to make them puff out correctly. Been there, done that!
On the plane ride home from San Diego I read that chintz upholstered couches with big flowers and fluffy details are making a comeback to emotionally cuddle us all through the current financial upheaval. 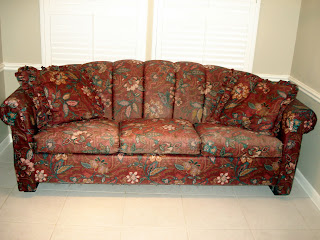 I don't know whether to laugh or cry to admit that I still have that style couch, custom made in the early 1980's, and delivered to my home as Geo. Bush the First was being sworn into office. Our couch, pictured above, is currently in storage with the rest of our belongings...we never could find anyone to take it off our hands in Houston.
Maybe it will be viewed as trendy-cool here in a year or so...who knows?
Now here's the kicker...if you scroll through the 50's lighting examples, you will see couches that look EXACTLY like my couch that was made in the 1980's. Yipes!
And also let me say that I really, really wonder what house styles will look like when we celebrate thirty two more years of marriage. 64 years of marriage...shoot, that happens all the time now days.
Do you suppose that red couch will keep on coming back into style every thirty years or so? Maybe we should keep it after all, and one day sell it to a person born ten years from now, who will think it is just the coolest example of Late Century Traditional ever.
You never know. Stranger things have happened.
Posted by Thoughts on Life and Millinery. at 9:50 PM 6 comments:

Sunset after the storm

It snowed most of the day Tuesday.
Around four I took a break from work, and went for a walk around the block, needing some fresh air and exercise.
The snow storm was breaking up, and the setting sun worked magic on the Wasatch Mountains on the east side of Salt Lake City.
(Each of these pictures look so much better biggified. Go ahead and give them a click, and enjoy the details!)

There were of course buildings, fences and power lines framing the mountain views.
Picasa editing got rid of that visual clutter via a simple cropping click.
(The mountain between the steeple and your right hand side of the picture above is Mt. Olympus, and the community at its base is called Olympus Cove.)

I hadn't noticed the birds in flight when I took this picture.

Now to decide which of these pictures should be my new header.
Decisions, decisions.
I love that all these shots were taken from just up around the corner from where I work!

(And oh, by the way...for the header? The birds in flight over the mountains won.)

Posted by Thoughts on Life and Millinery. at 10:01 PM 9 comments:

Ready for a new Constitution?

I was shocked last week to discover that there are 30 states that have called for a Constitutional Convention, the first such "Con Con" since 1787.

Only two more states need to call for such a Convention and just like that...our US Constitution will be subject to being re-written, presumably to reflect "modern" mores.

Just thinking about that gives me an absolutely sick inside feeling that makes me want to go hide.

I am posting a link so at you will know what is going on.

Winter in the City

We're having our first heavy snow fall; it began Saturday morning and is continuing through today. It fulfills a personal wish: my office at work is windowless and I oh so much wanted to be able to just sit and enjoy watching a snow fall from home.

Saturday day was spent enjoying watching the snow from various windows in our apartment, and taking a good hot soak in the apartment outside jacuzzi, catching nickle sized snowflakes on our tongues while the steam rose all around us.

Bernie had to go out to work for awhile, and then he ran a few errands. When he returned it was dark out; he urged me to join him in a stroll around the city to see the Christmas lights.

I tugged on some heavy shoes and appropriate winter wear and together we headed out into the cold snowy night.

Here's the outdoor ice skating rink that is two blocks from our apartment: 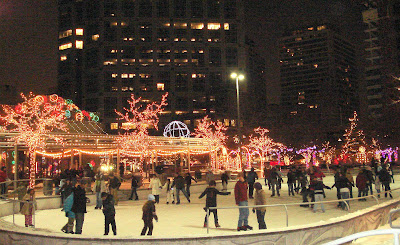 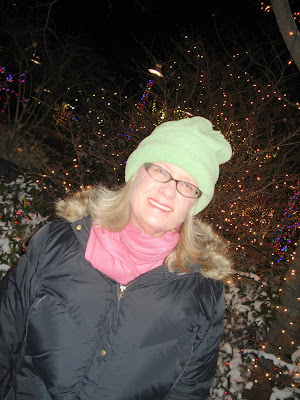 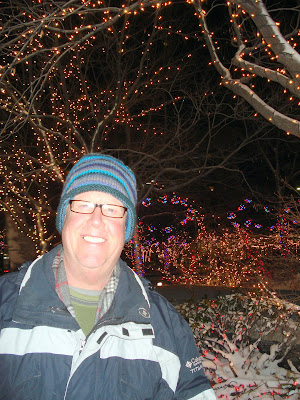 Downtown Salt Lake has lights everywhere. Every tree, bush, wall, building, is wrapped with lights. Pretty magical in the snow.
We were hardly alone on the streets though. Apparently there were several events being held and each corner had throngs of people waiting to cross the street.
(I had to laugh at some of the fashionable ladies in party dresses and OPEN TOED high heeled shoes...)
Hot chocolate was being sold from carts, bag pipers were playing bag pipes which ALSO were wrapped in Christmas lights. Music, lights, snow, a hand to hold...what more could you possibly want on a Saturday night near Christmas? 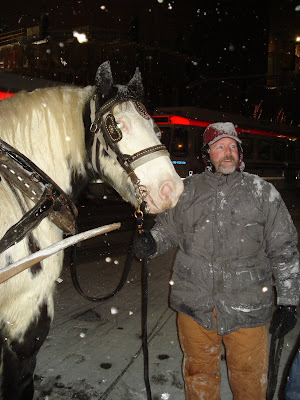 What a silly question. 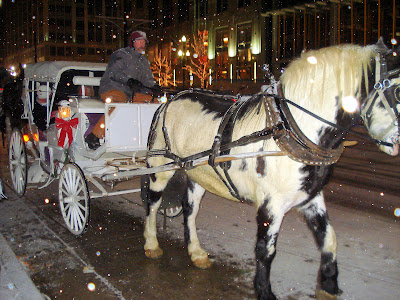 A horse drawn carriage ride through the snowy streets to take in all the sights, of course.
Bernie and I snuggled under heavy carriage blankets, exchanged a few kisses, and smiled at the people crowding the streets that waved and smiled back.
(The wide eyed stares of children surprised to see a horse on the city streets were absolutely priceless...)
After that we walked back home, stopping to "borrow" some time in front of a warm fireplace at 1910 era hotel across from our apartment complex.
Yes...it was a wonderful walk, and yes, I am glad that we now live in this city!
Posted by Thoughts on Life and Millinery. at 9:18 AM 7 comments: