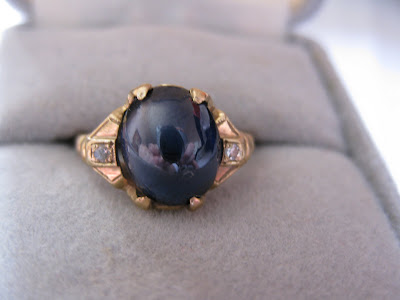 I'm "borrowing" a picture from daughter LauraRN's blog.
This ring and the month of June just go together.
June is the month when this ring was given, and given, and given again through three generations of graduates. 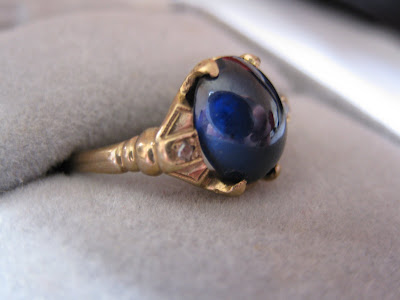 My mom received the ring for her sixth grade graduation.
When I graduated from sixth grade, some years later, the two side diamonds were added, because I was born in April, and diamond is my birthstone.
Ten years later I wore it as my "something blue" on my wedding day. My mom still wonders why she didn't think to wear it on her wedding day.

I only "owned" the ring for 24 years. When Laura graduated from sixth grade, the ring became hers. She still has it, after traveling for work all over America.
(She wisely left it in storage during those years.)

The oval shaped cabochon sapphire brings back so many happy memories. Next time I visit Laura, I think I will have to borrow it back for the day.
Just for old time sake.
After all...I can't possibly wear my wedding dress to her "everyone comes in their wedding gown" party without that touch of blue on my finger, now can I?

Oh yeah...my girl knows how to throw a party. It is set for August, and brides of three months and brides of 30+ years will be there in their gowns, to admire each other and play guessing games (who did have the longest train? The LOWEST cut front? The biggest bow on their butt???)

I read about a group of women who have such parties, and now their daughters are thrilled to also come to the party after they get married, just to wear their gowns too! It is all in fun...tank tops are worn under dresses that don't quite fit anymore, so the back can just be left open and pinned together with a ribbon if needed.

I mentioned the article to Laura, who mentioned it to her friends, and the next thing she knew...EVERYONE wanted to come to that kind of party too!

Modern brides often have their gowns cleaned and sealed up to await a special day in the future when some other young woman will decide to wear the dress. I personally have only known two brides who have done that...two sisters who both wore their mother's glamorous 40's style satin gown.

It is understandable that a sealed up gown should really be left in its pristine state.

On the other hand...instead of waiting to thrill an imaginary future bride, you could get your thrill now, by wearing your gown to a party with similarly attired friends.

I'm pretty sure no one will be wanting to wear my gown in the future...and Laura herself has TWO wedding gowns (one for the wedding and a matching less poofy one to wear to the reception) gowns that were purchased for the wedding that she later backed out of.

A few of the guest are no longer with their grooms...others are still happily married and at least one person will be wearing a dress that didn't actually make it to a wedding.

In this case...it is all about the dress anyway.

If you think you'll be in San Diego in August, let me know...you are welcomed to come to the party too!

Or throw your own party. Maybe we can start a new holiday:

Wouldn't that be fun? Women in white at work, in the grocery store, at parties, in court, riding subways, hanging out at the beach, working at construction sites, dancing in fields of springtime grass on their blogs (Hi Lovella!)

Whatever, wherever the mood strikes.

Maybe I'll start a petition. If you would like Congress to declare such a day, just leave a comment on this post. Once I get enough signatures, I'll send the idea along.

It certainly is not nuttier than anything else that Congress has pushed through, right?
Of course right!
Let's do it!
Posted by Thoughts on Life and Millinery. at 9:39 AM 7 comments: