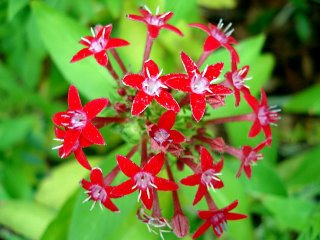 I'm in a Christmasy mood!

I've decided to post red and green pictures every day until Christmas. It is fun to have my camera with me and to be looking for the colors to be found together in nature.

This is shot is a flower in our front yard. It draws butterflies and hummingbirds like crazy, dies down in winter but comes back in the summer.

The last 24 hours have been busy-fun!

Bernie and I headed downtown for the Nano wrap party. Mostly 20-somethings, at an apartment with a Maine Coon cat and a baby white with black trim kitten. The kitten was a pistol! The Nano folk were hilarious, brilliant, and if my Bell's hadn't been bothering my eye we would have stayed till the wee hours! "Chuckybones" the Houston area moderator gave me one of the Nano 2006 posters. It is a key board with finger prints on the keys. I'll try to get a picture later...

EVERY THING was going on today. I could be in five places at once and still be missing half a dozen other things:

Dickens on the Strand, which is Galveston Island's Christmas event. Everyone dresses like Dicken's Victorian England. The Queen even make an appearance (an actor dressed as Victoria.) We've been in Houston six years and STILL haven't gone. Everyone says the hot set up is to get a hotel room down there and stay for the weekend.

Also going on in the Houston area:

There are historic home tours.

There are decorated home tours.

There is the premier of "Enron, the Musical" (sung to the tune of "What do you do with a problem like Maria: Change Marie to Jeff Skillings, and you get the idea)

"Frog and Toad around the World" is playing. It is a musical that was nominated the same year as Hairspray. F&T is based on Arnold Lobel's classic children's books, and I would LOVE to go see it...

Peter Nygard had a showing of his fashions downtown. He is really being pushed by Dillards, and his stuff is distinctively targeted to the 55-70 year old set. They aren't sporty/classic enough to suit me, but I am eyeing his stuff. Maybe I will want to wear his collection in a couple of years.

And there is shopping. I got a lot of Christmas shopping done today, AND found a style of pants that FIT, so I got two pair and two scarves and a jacket (all this in addition to a pot load of Nordstom clothes the day before Thanksgiving...) so my wardrobe rocks right now. I love that...
It helps to that I have lost 10-12 lbs, so I don't feel so blubbly. High energy indeed!

The weather is staying in the low 50's, perfect Christmas weather. Things are just delightful!
Tonight we are staying home and having dinner in front of the fire. Nice.
Posted by Thoughts on Life and Millinery. at 4:20 PM No comments:

Around the area on a cold blustery day 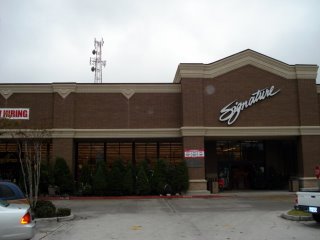 Nov. 30- I headed to Krogers and got my two little trees. 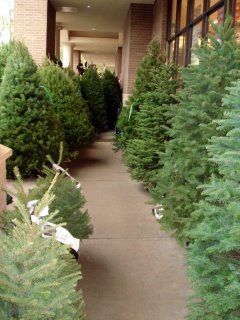 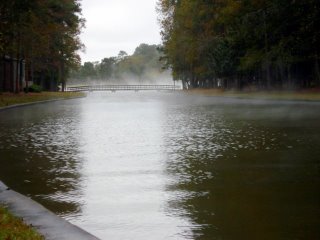 And on the way home saw this fog rising from the Lake.

It is a bayou, off one of the Kingwood golf courses. The banks are people's back yards. 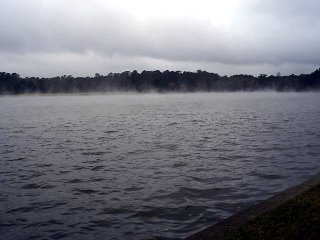 The larger lake area had choppy water and the mist rising from the water was ghostly and driven. The temperature dropped from 77 degrees to 50 degrees in one hour.
Posted by Thoughts on Life and Millinery. at 2:21 PM 1 comment:

Globally, 121 people wrote novels that fit into the religious fiction genre. I was one of them.

Austin TX was third globally for participation, however they only had 136 winners.

Those are pretty amazing statistics, considering the whole idea first started in 1999 with 22 people writing, and six completing.
Posted by Thoughts on Life and Millinery. at 6:29 AM 1 comment: 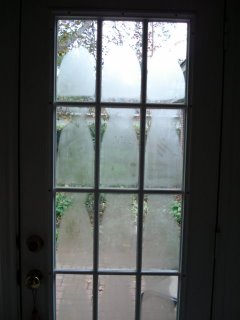 Yesterday I literally sweated as I wrote, it was 81 degrees outside, with mosquitoes.

It was pretty much 81 degrees inside too, and a few mosquitoes had somehow snuck inside as well.

I suffered for my art, mostly because I think it is just wrong to have to use air conditioning in late November.

My friend Gail who lives in Colorado Springs had 18 degrees outside, with snowflakes.

I promised I would spray for the skeeters first. No sense sending those nuisances along.

The over night low here was 70.
But at 9 am the temperature started to drop.

We noticed the windows were fogging up. 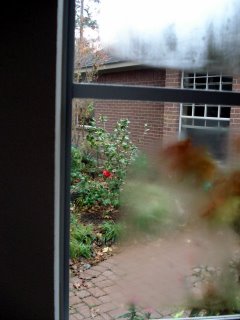 You can see my first Camellia out there. 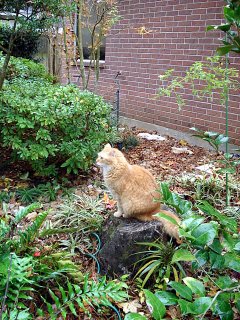 Tiggie decided he would go outside and sit on his "Considering Stump", the stump left over from when the tree blew down during Hurricane Rita.

He sits and his ears flick about, sensing, deciding, considering. 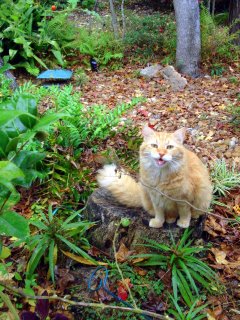 "I would prefer to go inside now. It getting cold out here!"


Like I said earlier, I am high as a kite today.

I had a nice long chat with our son, who has snow at his place and is cozy in his new home with double pane windows, even with like 1 degree temperatures.

Bernie is back from Toronto. Laura is pounding away on her story, AND posting on her blog
Her world is so different than mine.

Anyway, the drop in temperature just invigorates me. I went and bought two small two foot high Christmas trees, shipped from Bellevue, Washington, our son's girlfriend's home town.
That is kind of sweet.

I've made a nice mug of spa tea, a mint and lavender blend. It's in the tea cup Gail got me years ago.
I brewed the tea in the gold tea pot, all the while fighting the urge to break out all the Christmas china, and decorate like crazy.

Tomorrow, December 1st. I'm going to hold off until December. And hope the cold weather lasts.
Posted by Thoughts on Life and Millinery. at 12:01 PM 1 comment: 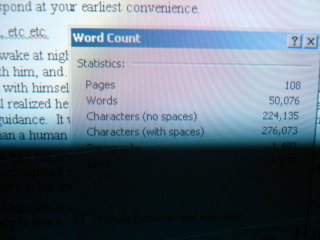 If there was one single thing I learned in grad school: If there's a computer involved, get the work done a day early.

Computers thrive on doing unspeakable harm to work moments before a deadline.

The novel is 101 pages, the extra pages are blank sheets at the end.

I've got my NaNoWriMo certificate, a TGIO party Friday (Thank Gosh Its Over!), about six months worth of editing to do, (NaNoEdMo!) and about another 30 pages to tie up all the loose ends, in this book. 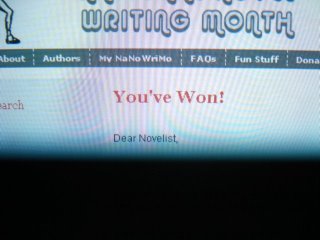 The novel is titled "Shepherds" for now.
And, yes, oh yes, there is another book to follow.
Next November.
Shoot me now.

Next time though, I'm using a lap top.
Posted by Thoughts on Life and Millinery. at 7:06 PM 3 comments:

First of one, last of another, maybe. 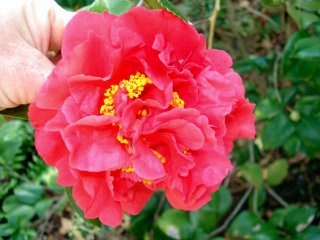 The camellia bush bloomed this morning. Yesterday the bud was just showing a little color, and today, here it is in all its glory.

There is still enough autumn color that its reddish pink clashes with the oranges and rusts surrounding it.

We're supposed to get a big storm tomorrow, which should clear off all the fall color. I will have to decide if I want to bring this flower inside.

The rain will discolor its petals. But I hate to pick it, because it can be seen from the window, and is really a spectacular bust of color. 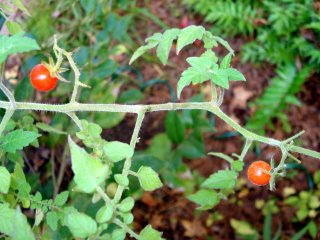 The camellia bush has acted as a tomato cage all summer. The volunteer tomato plant sprawled up and over the Camilla, which neatly provided some shade for the camellia. That was a good thing, as the camellia had been planted when there was a tree over it providing shade. The tree blew down during Hurricane Rite, and we were not sure the Camillia would survive in full sun.

Still having tomatoes on the vine is probably unthinkable to most folks that live north of us, where snow and ice is in their gardens. 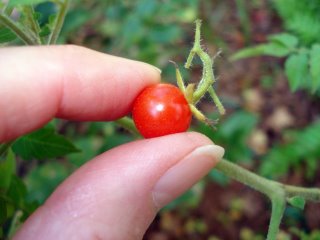 These are probably the last of the tomatoes from this plant. One of my first blogs back in June celebrated the first tomato that ripened.

They are just the cutest little tomatoes that I have ever seen. See how tiny they are? 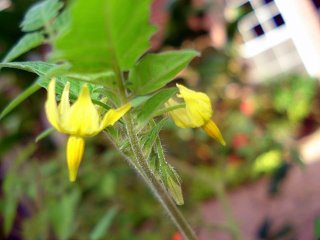 I might be jumping the gun here by declaring those tomatoes to be our last.

We've still got tomato blossoms. It's 81 degrees here today, so who knows when this plant will finally call it quits.
Posted by Thoughts on Life and Millinery. at 12:14 PM 1 comment:

Are you looking at me? 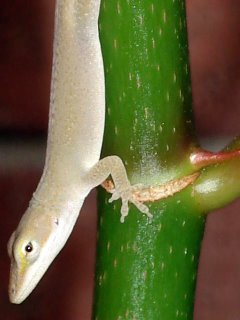 Yes I am looking at you, you cute little lizard you!
Just hanging around the garden on a nice warm fall day, eating bugs (pleeeeze eat bugs, my little lizard friend, especially the mosquitos!) 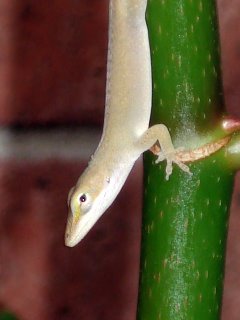 You have got the CUTEST toes! 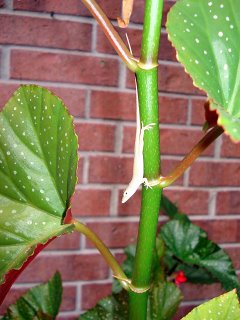 He did turn green later. I was going to include him in my upcoming "All Things Red and Green" blogathon. 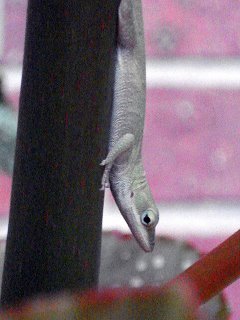 Posted by Thoughts on Life and Millinery. at 6:50 PM 1 comment: 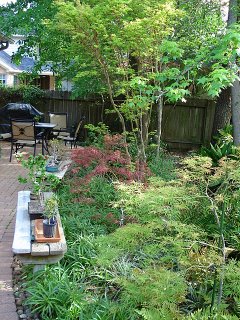 I wonder what setting I used for photographing the garden last summer, around early July?

That picture is so crisp and clear.

Anyway, here's how the garden looked in summer. 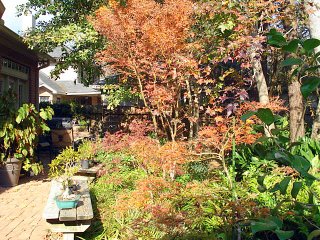 And here's how it looks in Fall. 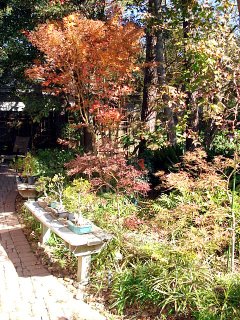 This shot is a little closer to the position I was in for the summer shot.

The garden looks completely over grown, which truthfully it is. I'm waiting for January to clean out the beds under the trees, mostly because by then the dad blasted mosquitos will be in bed, asleep, and hopefully uninterested in biting me.

It is warmish today, and a little humid. We're likely to have some rain, and heavier rains later in the week. By Friday a lot of this fall color will be gone in our garden.

There will more changes to capture then. But for now, I'm enjoying taking writing breaks by walking around the garden, plotting my plot line, and planning my plans for planting my winter garden plots.
Posted by Thoughts on Life and Millinery. at 9:57 AM No comments: