Going Green: Jeff is from Mars, Jill is from Venus, and Algore* is totally nuts. 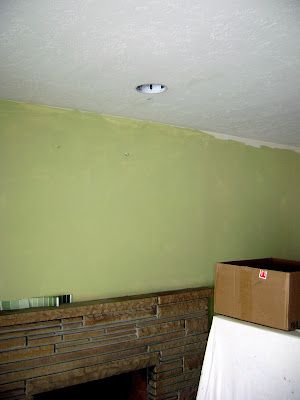 Green tea wall, take one.
A golden bright clear green color, with just a hint of olive.
Monitors vary, so in the interest of tapping in to collective color memory, the wall is the shade of the golden green you see in some variegated apples. Not that I think that description will help much either....

To me, it looked good. I could picture it balanced with the brown upholstery, and a dark green area rug that had other colors as well.
But...I also knew that the color would cause emotional discomfort to the 80% of the population that prefer blue based colors.

Blue based Bernie was OK with it.
Blue based Jeff recoiled.
Out came the color swatches again.
(The poor guy has yet to be wed; any seasoned married male knows better than to deliver negative comment on female paint choices: doing such is pretty much a guarantee of being dragged into a re-painting event. I asked the stream of married electricians, carpenters and drywallers about the color; they all delivered award winning performances of considering the wall color, and color sample #2 before solemnly voting for the color already on the wall.)

The swatch square second from the edge of the above picture is pretty close to our next attempt.

Currently the walls are paint what I would call mint green ice cream with a bit of yellow gold mixed in.

It turns out that the house has a talent for shifting color tones hourly.
I have to see each color in morning, noon, sunset and evening lamplight.
I'd swear each time that the room has been repainted a different color as the day progresses.

The current shade I have only seen in afternoon, sunset (when it went technicolor crazy green) and lamplight.
This morning we'll take another look and decide if this really is the right one. 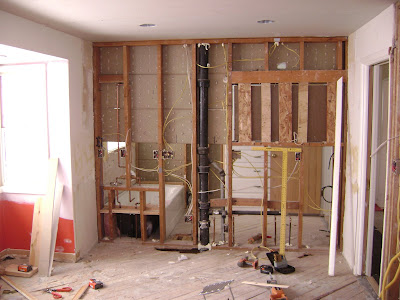 To clear up some confusion: We will be moving into the house next weekend.
By that I mean we will be vacating our apartment, and moving our apartment furnishings into the ranch house basement.
The furnishing that graced our Houston house will remain in storage here in SLC until the upstairs of the ranch house is finished in early March.
Paying apartment rent, house mortgage and household goods storage (a sizable chunk o' change proposition) added up to a decision to rough it for a month in the incomplete house.
Pictured above: My kitchen in progress.
I'll be cooking with a camp stove and using the snow and an ice chest for refrigeration for the next four weeks. 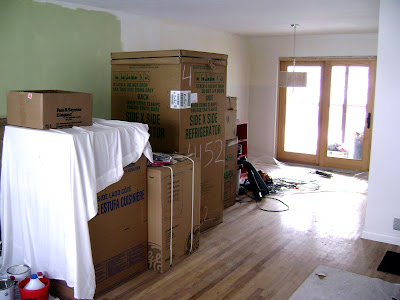 I'll be walking around the boxes in the living room that hold my spiffy new appliances until the kitchen cabinets arrive. 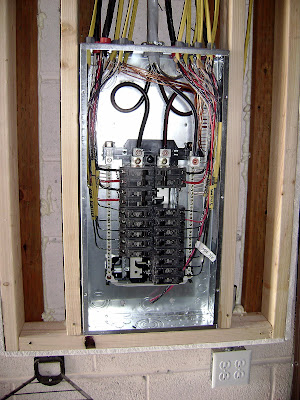 In terms of household coziness, you really can't beat a nicely wired sub panel. Isn't it lovely? Isn't it doubly lovely as it is providing what is needed to run the hot tub?

Oh yes, it certainly is.
I may be without a kitchen, and only have one sink and bathroom for a month, but Saints Be Praised, at least the hot tub is bubbling merrily beneath the deck.
That and a glass of wine will smooth over any inconveniences that must be endured.
And probably will make the shade of green on the walls become completely irrelevant after all.
*RE: Algore. Check here for more information about the correct Biblical view about to "going green", which isn't exactly what Al Gore has claimed.
Posted by Thoughts on Life and Millinery. at 8:03 AM 5 comments:

Random Views from the Rambler 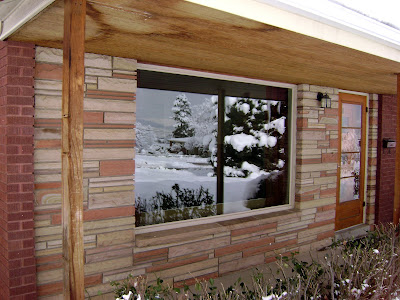 The front picture window, living up to its name. 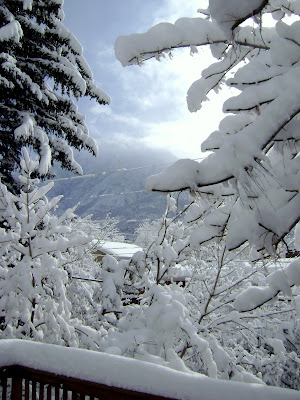 Dawn breaking as viewed from the deck. 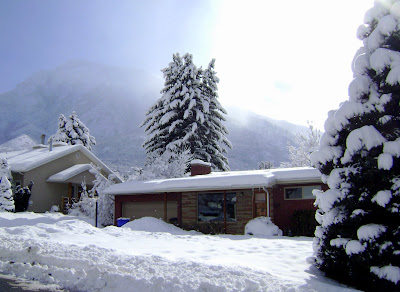 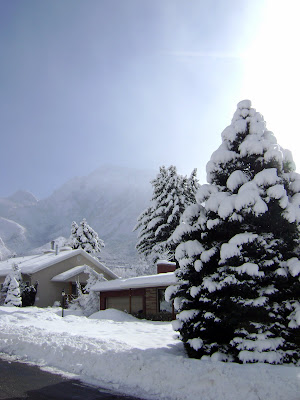 The enormous fir tree in front, covered with powder clots.
A foot of snow fell; all as light as air.
Nine more days until we move in.
Posted by Thoughts on Life and Millinery. at 8:08 AM 14 comments:

What Our Eagles Are Really Doing Up in Canada... 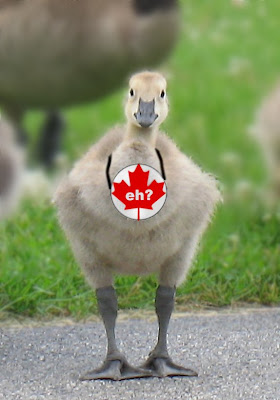 It pays to keep up in blogdom.
Otherwise you wouldn't know what is really going on out there in the world.
While our "friendly" neighbors to the North chirp merrily about "our" bald eagles perching on their property, those of us in the know "know" that actually our eagles are on patrol.
As they should be.
Read more about why here!
(grin!)
Posted by Thoughts on Life and Millinery. at 12:52 PM 5 comments: 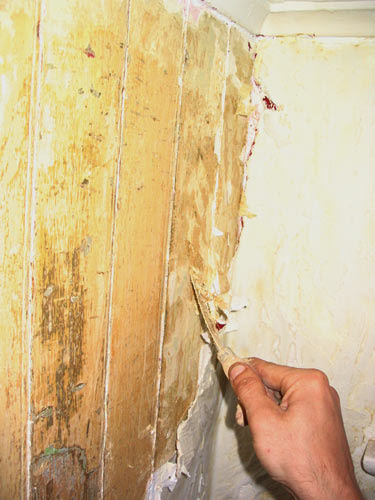 I've put another four hours into the five feet of knotty pine paneling stripping. We've gone to using toxic stripper, and it is still just barely moving the gummy paint around. Apparently when the can says "works best at between 65-85 degrees" it really means "this stuff DOESN'T work when it is colder than that, so don't even think about trying to use it in winter!"
The suggestion to use a heat gun is a good one, and I have used those to strip wood in the past. My hands are not as young as they were when I last used a heat gun; I'm positive I would be nearly crippled if I attempted the project using that option.
After removing the chair railing and seeing the original unpainted knotty pine beneath it I was convinced that I would rather not have the rather orangy bare wood anyway, since the fireplace bricks are pinky red with almost orchid colored mortar (those wacky 50's folk and their colorful choices of mortar!)
I've picked out a nice neutral/slightly gray greenish white paint color for the panelling if we can ever get the gloppy stuck paint off the five feet in the one corner. I suppose we could just paint the rest of the room and frame the glop...and refer to it as modern art. I've seen worse sold at six figure prices in art galleries.
At least the green tea paint job looks great in the living room. I'll post a picture of it was soon as a second coat goes on.
I'm wandering around the house with a color sample fan book, trying to imagine what colors to use in the master bedroom, guest room and office. Currently they are painted vivid lime, avocado and taxi yellow, in that order. Hard to imagine other colors when surrounded by those shades.
My interior decorator came and dropped a handful of color swatches in my hand and a list of rooms and numbers to match up.
Not exactly how I was taught to present decorating suggestions when I took interior design in college.
She favored gray: deep blue gray for the living room, dark grayish blue for the master bedroom, deep purple gray for the guest room, gray with a bit of brown for the hallway...most of the rooms are north facing rooms with small windows under deep eaves.
Oh and deep deep gray with a hint of sage for the kitchen. To balance all the woodwork...
In the initial interview with her the only color that I had said we did not like was gray.
At that time I told her that both B. and I work in windowless offices that are painted gray. No gray, please!
Apparently I will soon receive a bill for the two hours of work that were put into grabbing every shade of gray color swatch and handing them over to me. At $75 per hour.
It amazes me that selecting an assortment of gray is billable at such a rate. Needless to say, I won't be using her expertise any further.
Right now we're thinking a midtone coral pink for the master bedroom, lavender blue for the guest room and soft yellow for the office. Or maybe lobster red.
Anything but gray.
Posted by Thoughts on Life and Millinery. at 10:39 AM 9 comments: