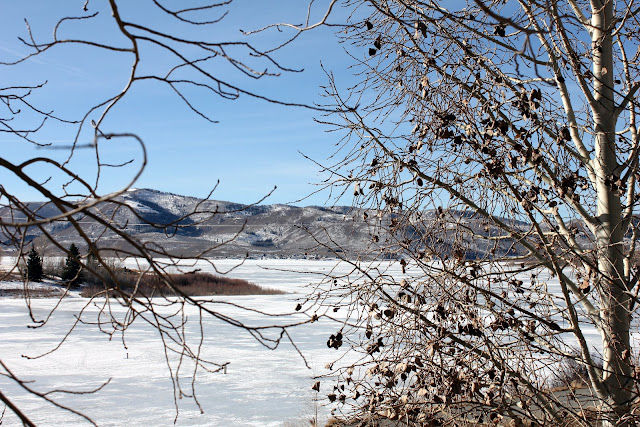 Back to field visits with our mobile library teams.

After being laid up over the New Years three day weekend with more fever and chest pain, I was at last feeling good again, so I scheduled a visit with the Carbon County bookmobile team. 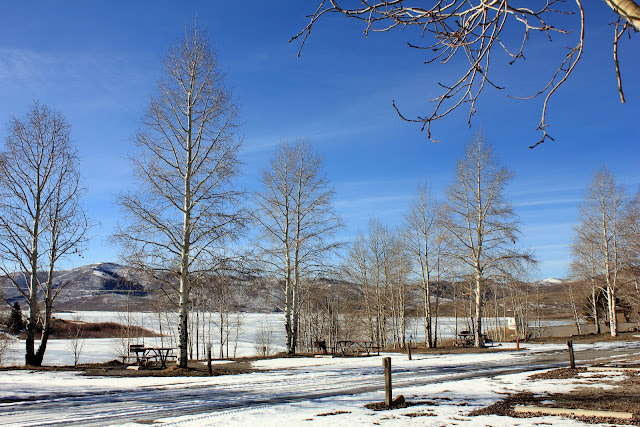 The 300+ mile round trip journey down to the county was a breeze: the weather just couldn't have been better for a long drive all by myself.

I got to the designated meet up site a bit early so I had a chance to take a few pictures of the Scofield area. 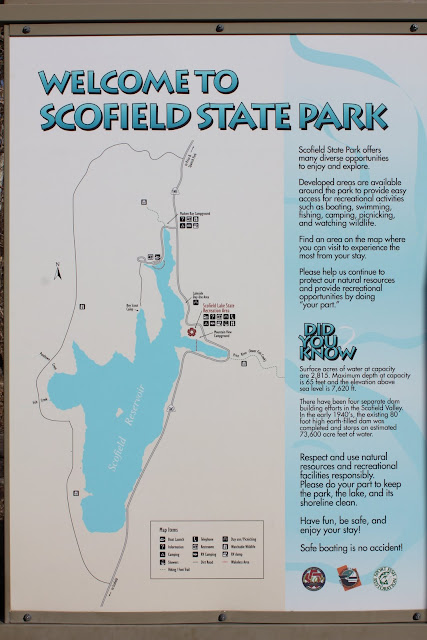 (After I got back home Bernie reminded me that we had actually visited this area before.  I *thought* the name sounded familiar!) 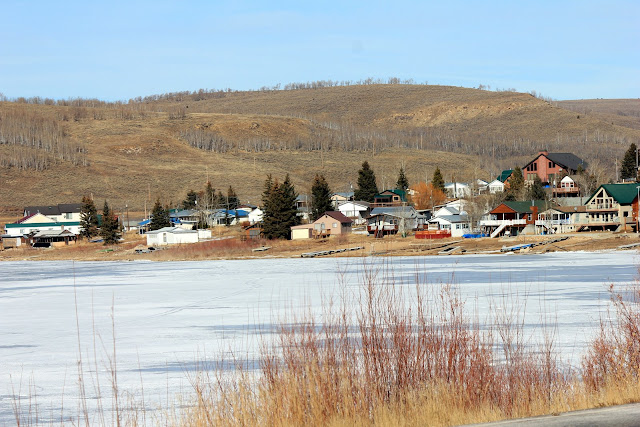 It did look quite different with the blue lake frozen solid though. 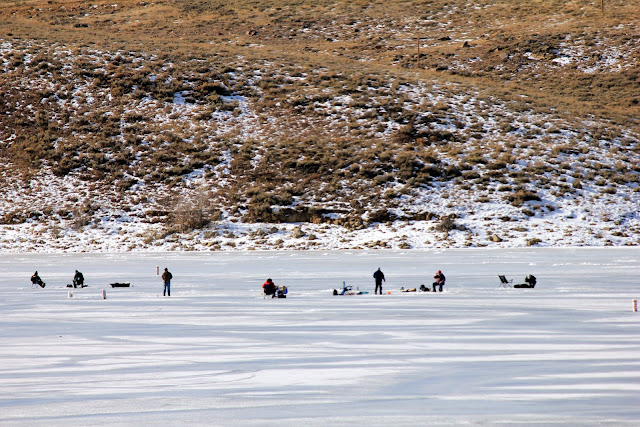 Not sure how it is that so many men can afford to pass the day away ice fishing on a Wednesday... 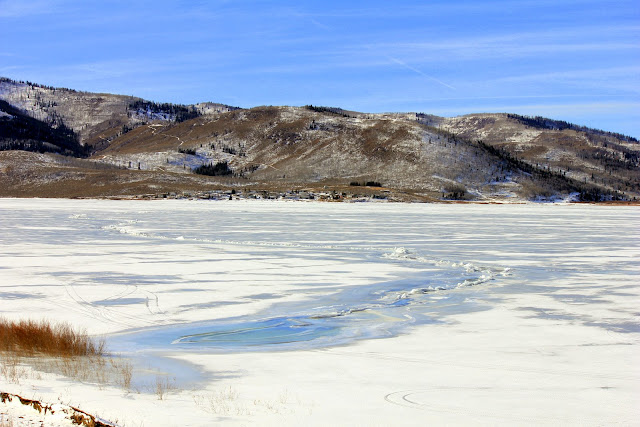 I confess to an having an extremely wary attitude towards frozen lakes.
Doesn't it look rather unfrozen here?
How can one tell where it is safe to wander on the ice and where is it really unsafe? 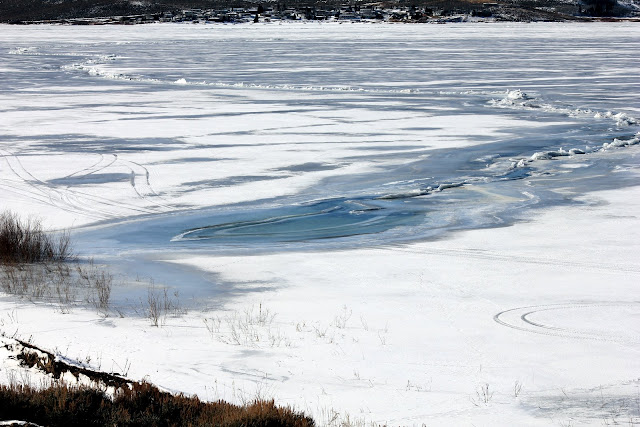 I could see where people had dared to drive right up to where the ice must have been the thinnest. Were these folks silly teenagers or ???? 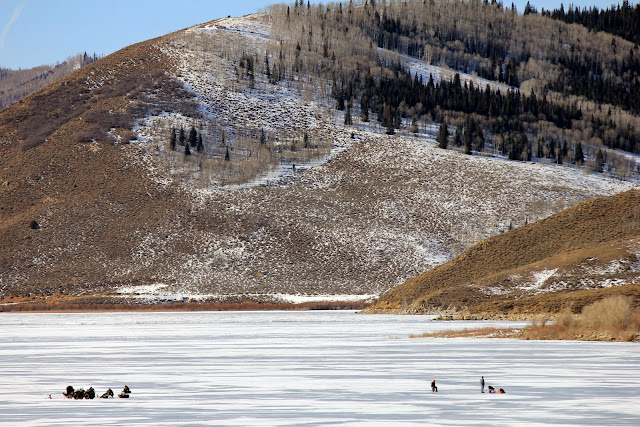 Also: How are ice fishing grouping determined?
Is there an understood space between rule? 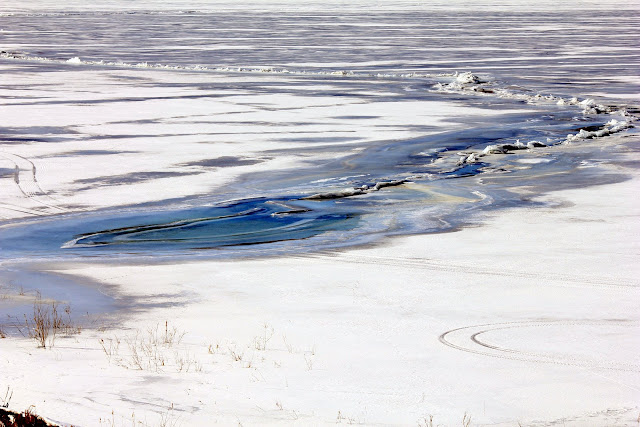 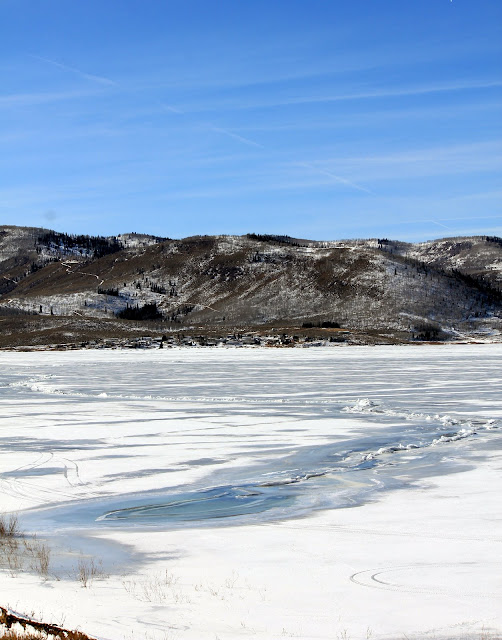 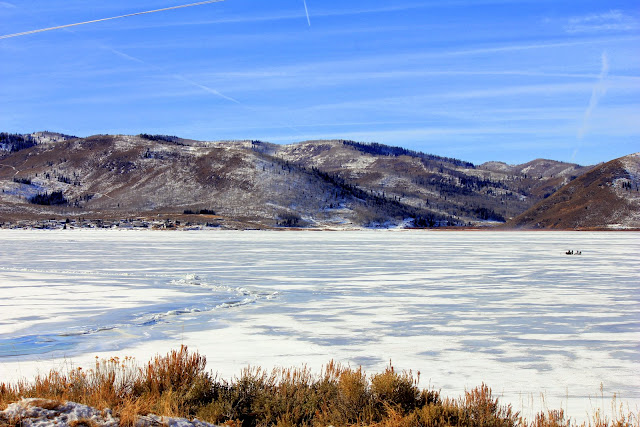 As I stood near the edge of the lake I kept hearing a low note sound, like someone blowing softly and irregularly on an empty Coke bottle.  There wasn't any wind; was the sound I was hearing the sound of the slight motion of the frozen water? 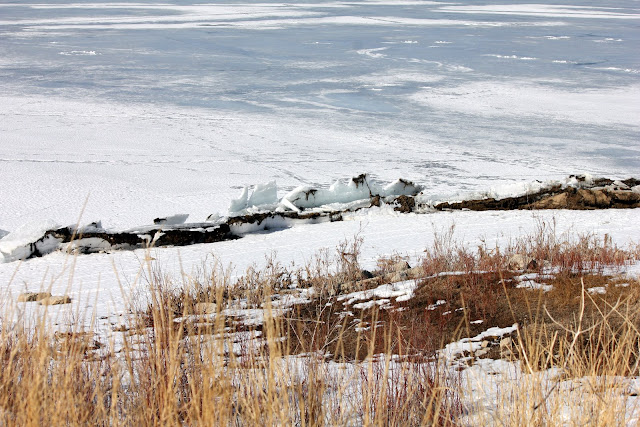 The lake's edge had up righted frozen sheets; I think that that is called frost heave, something I have seen in soil before but never with frozen water. 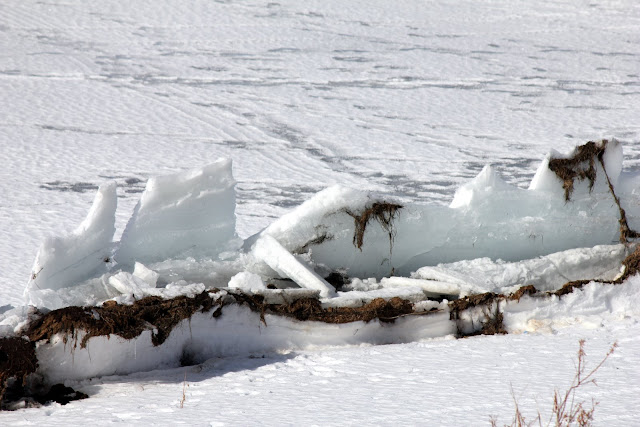 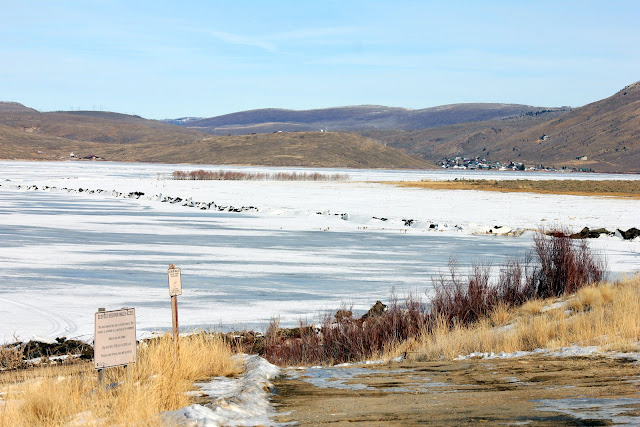 The "heave" created a fence like edge to the lake. 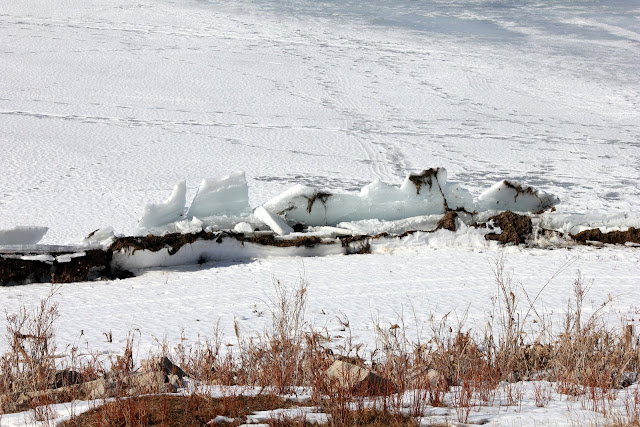 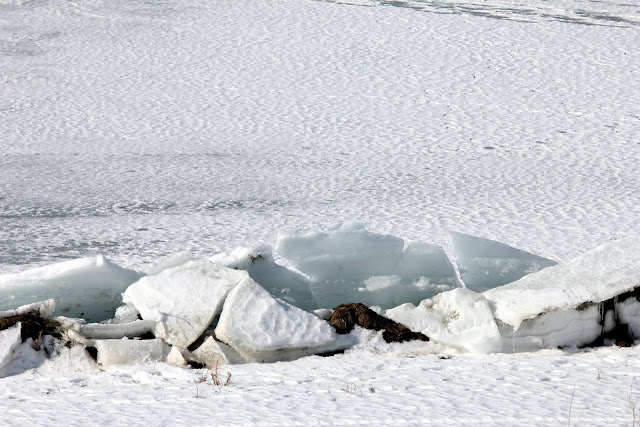 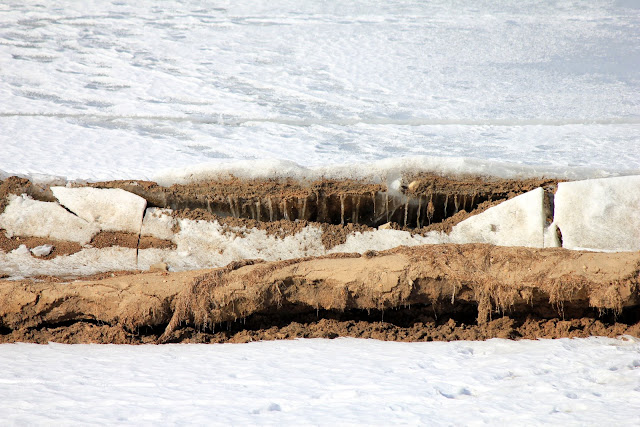 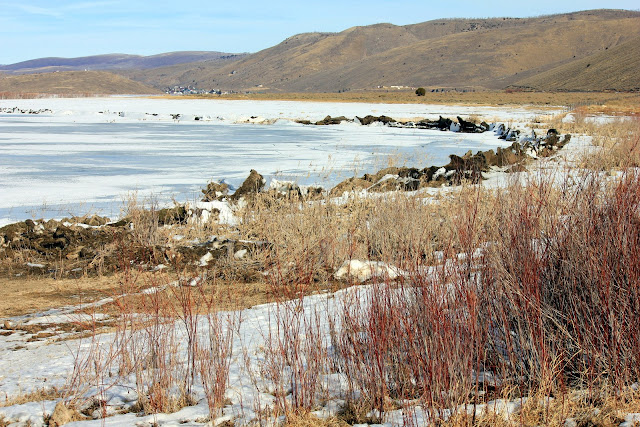 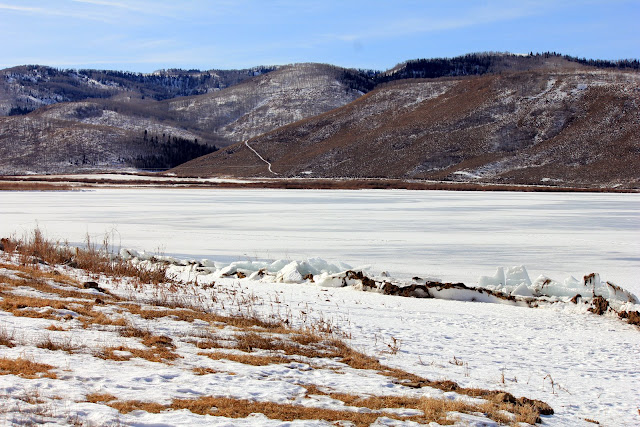 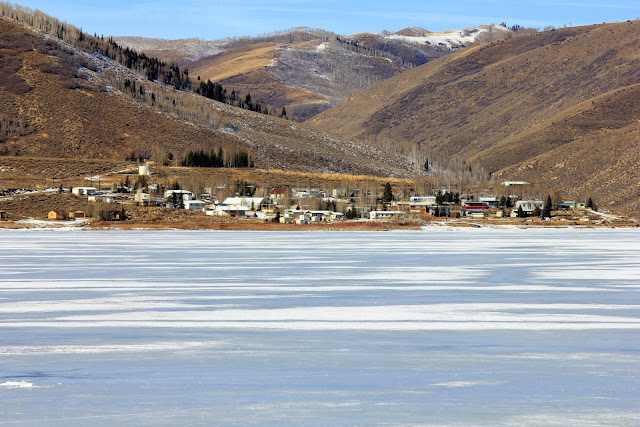 Couldn't resist thinking about what it would be like to own a cabin on this lake.
It would be  so pretty there in summer and the aspens on the hills would be gorgeous in fall.
Truth is...I get bored with lakes.
I like to stay by an ocean shore or a streambank instead.
Maybe I just need to rent a cabin here some weekend instead to get the idea out of my system. 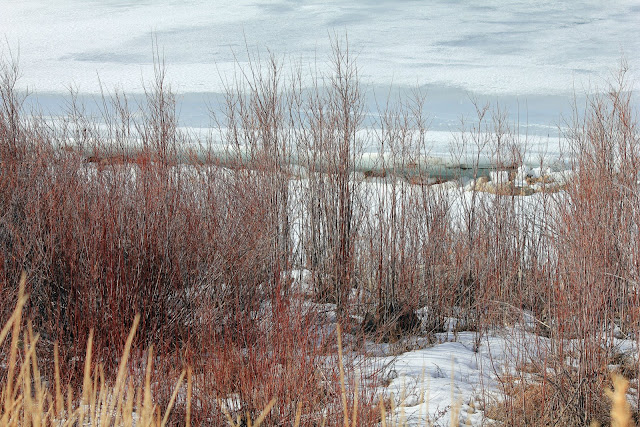 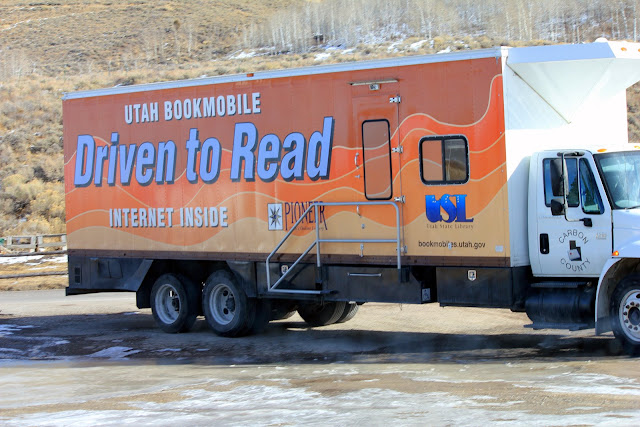 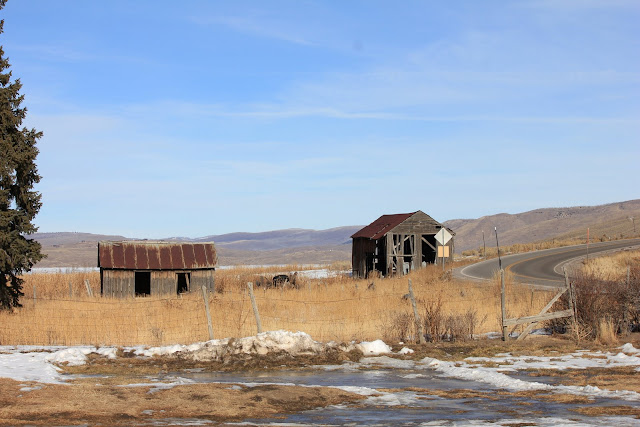 Just beyond the parking lot where we met up: a few decaying buildings. 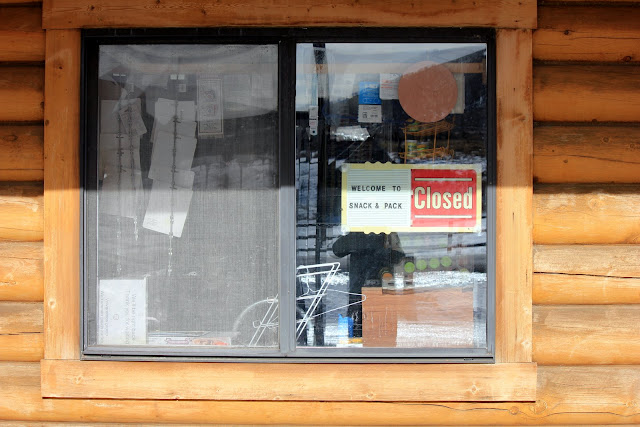 The "stop" was at the "Snack and Pack", a cabin community general store that was closed for the winter season.
(Bernie  later reminded me that we had stopped for a hamburger there during our summer visit after he saw the pictures).

Anyway, it was a good first meeting with the driver/librarian, who on this day was doing her stops in a bookmobile that had a broken heater, so she was doing her job in a space that was well below freezing.

I have to admit...I envy her.
It is pretty sweet to work in a library that moves around the back country all day long.

She asked me if I had had a chance to see much of the county and did I think it was gorgeous.

I had...and told her I imagined it was incredible in autumn.

Sure beats the view from my office window.
A view I no longer have as of yesterday; the office staff has had to make room for another division within the state, so some of us got moved around.

Just call me a cube farmer now.
No office door...no office window...oh well.
Just glad that once a week or so I will still be able to roam about the rural back country and fill my eyes with beauty that way.
Posted by Thoughts on Life and Millinery. at 8:03 PM 10 comments: