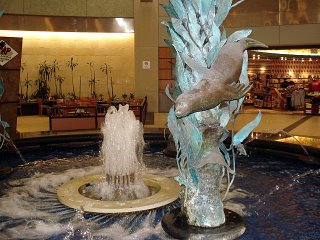 I've discovered most airports do have wonderful art. But Lindbergh Field's art manages to capture not only the look of San Diego, but the sound too.

This water feature has four green tarnished copper seaweed columns drifting towards the ceiling, with fish and other sea life, such as the seal in this view, swimming between the columns.

The water rushes out from the center fountain in intervals of varying intensity, resulting in a sound that mimics the sound of the ocean waves rushing to the shoreline. 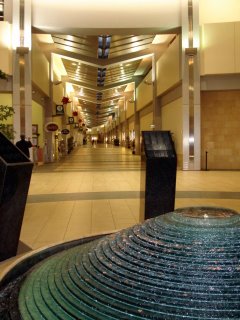 The airport has a very modern Southern California feeling. 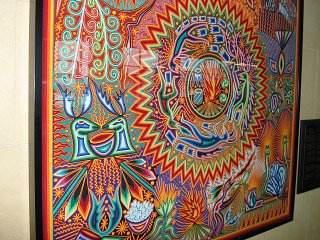 The airport also has various yarn paintings, by Mexican artisans in a tradition folk style. 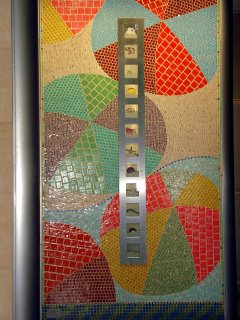 Each bathroom has themed tile work, and small displays of sea shells on sand in the middle. 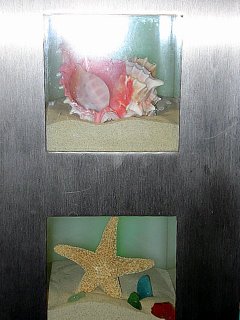 (I think they are fudging a little. I'm pretty sure this particular shell isn't found in the waters off San Diego!) 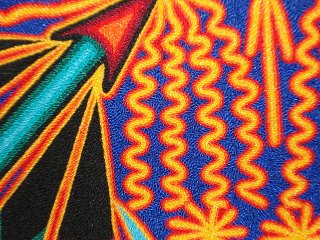 Here's a close up of the yarn paintings. The red stripes are one fine yarn length pressed in to wax.

I've tried to do yarn art like this in school.

Let's just say "Don't try this at home, folks." Leave it to the professionals!

Having such interesting art to look at always helps to ease the sadness I always feel when I leave my family in San Diego behind to fly away home.

What a wonderful San Diego Christmas we had!
Posted by Thoughts on Life and Millinery. at 2:10 PM