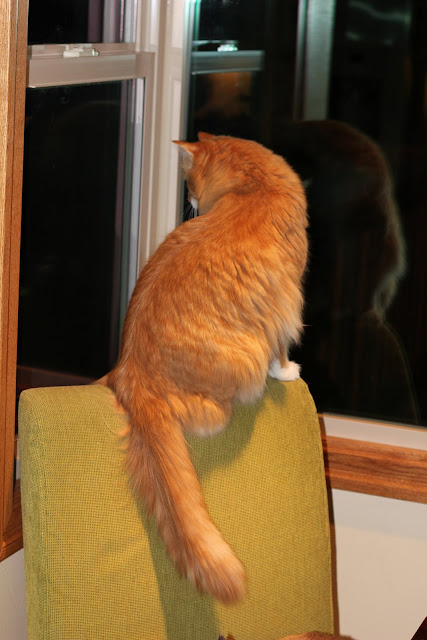 A little known secret at our house:  Before sunrise, our cat population appears to double.

Obviously there is nothing to be seen by looking outside into the dark.  But if a cat does chose to take a look, a mysterious cat duplication occurs. 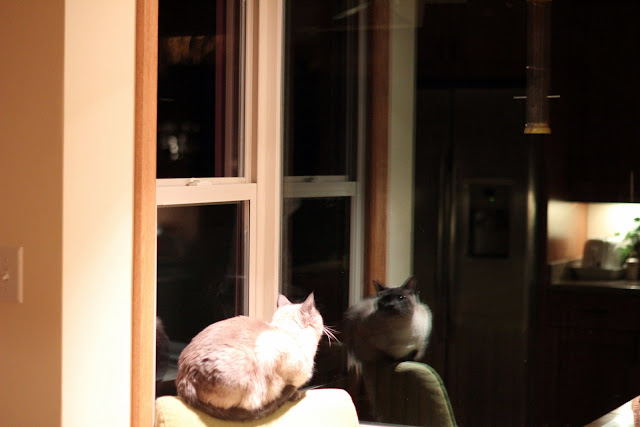 Sometimes it appears that I have up to six cats with me at during my pre-sunrise breakfast. 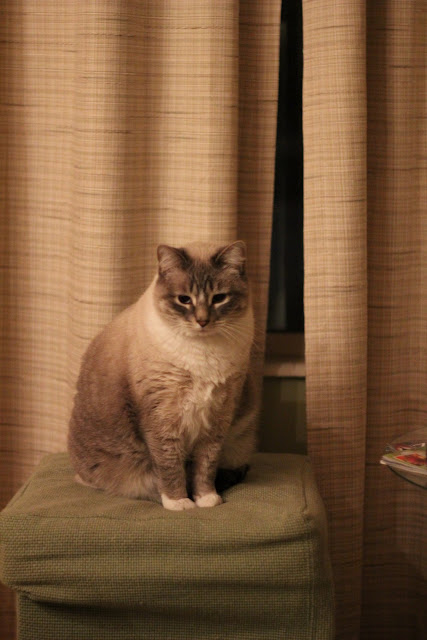 This morning Frenchie was twinning by looking out the front window.  That is an important window to attend; neighborhood cats frequently pass by and stare inside before ambling on back to their own houses and their own food dishes. 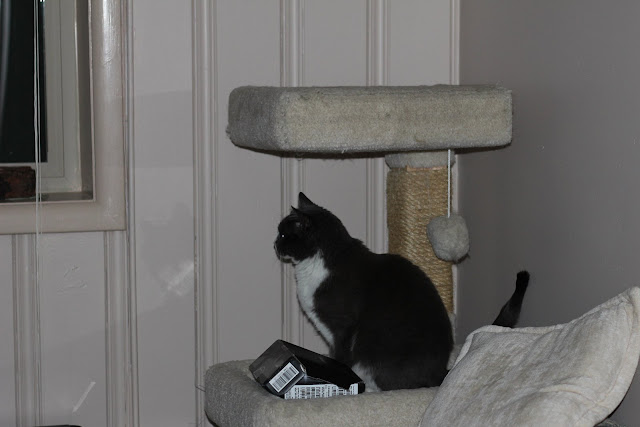 This morning Hart has already reported to his cube tower in order to get an early start on his day's work load.

All four of our cats are employed by Bernie to  serve as his office Catministrators.

The Bossman was still upstairs asleep when I peeked in on the office staff.  Once the Bossman gets up, the other cats hang around until it is signaled that he heading in to the office.  Then they all do a stair-pool together.

A "stair-pool" is sort of like a car pool, except the commute is a walk downstairs instead of a drive somewhere.

The three upstairs cats cluster around Bernie feet as closely as possible during their morning stairway commute in order to make it feel like a real commute.

Sometimes one of the cats will decide to "drive" themselves  to work, and they zig or zag inappropriately on the stairs causing a traffic jam to occur.

Occasionally there is a crash or even a pile up if Bernie isn't mindful of flow of the morning cat traffic around him.

Once they arrive at the home office, each cat nestles into their particular office space, Bernie fires up his computer, checks in with his team in South Carolina via email, and their work day begins.

It is no secret that the cats consider their work space to also be a napping space.  They feel quite comfortable napping away about 80% of their work day.

Bernie says a couple of them snore too...

Ever so often one of them will wake up and go off to visit the  litter and catch a snack in their break room.  When one is gone, it is not uncommon for another one to casually sneak over and take over their office space.

Bernie, as their Director, keeps tabs on this sort of underhanded office politics.  He is quick to re-settle the catministrator who  has overstepped a boundary.

Occasionally he is on a conference call and doesn't notice the subtle power play until suddenly a full on cat fight breaks out in the office.

Frankly I think it is hilarious that this sometimes happens when Bernie has his phone unmuted and the SC team gets to hear cats hissing and screaming at full throttle.

The SC team was pretty shocked the first time it happened; now they pretty much know each cat's name and probably are rooting for their favorite cat to win the current brawl.

Such it is, and always will be, in every workplace, human or feline.

Somebody is always looking for a little more say and another way to make sure they get what they think they deserve. 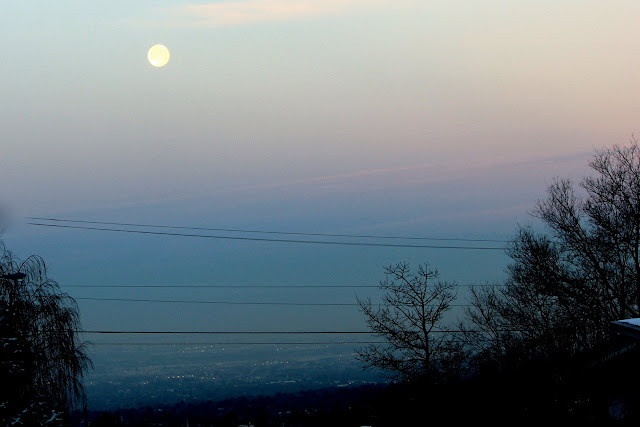 Moonset, as seen on my sans cat commute to my job two days ago.

It is still predawn here.
Must get back to my pre-dawntreading tasks.
Must get myself prepared for another day of journeying to the edge of the world, and then on to Aslan country.

Since I can't have a cat with me at work, I wish Reepicheep was going with me instead.
Wouldn't that be grand?
Wouldn't it?

Posted by Thoughts on Life and Millinery. at 7:10 AM 4 comments: 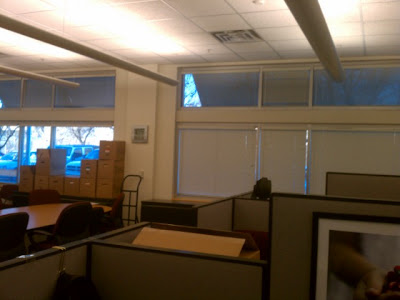 Why is it that the folks who distain window views always get the window seats in offices and on planes? And why do they also presume to assume blind control over windows that are beyond their assigned space? (and no...glare isn't an issue here). Windows with closed blinds in the morning hours always makes me think of sickrooms and elderly people who fear strangers would be looking in with evil intent. I think my co-work has plotted as well. A sign is posted in that cube space instructing visitors that a noise cancelling headset is in use, and to please tap on a shoulder to initiate conversation. Let's see...closed blinds, and reason to be inattentive. I'd call that a perfect set up for creating an employer sponsored napping room. (For me a view out a window is like water and air to my soul. Why those who dislike windows get them, and those who like windows don't get them is part of what makes work space assignments so bewildering).
Posted by Thoughts on Life and Millinery. at 9:15 AM 5 comments:

The Moon was at a Fiesta. 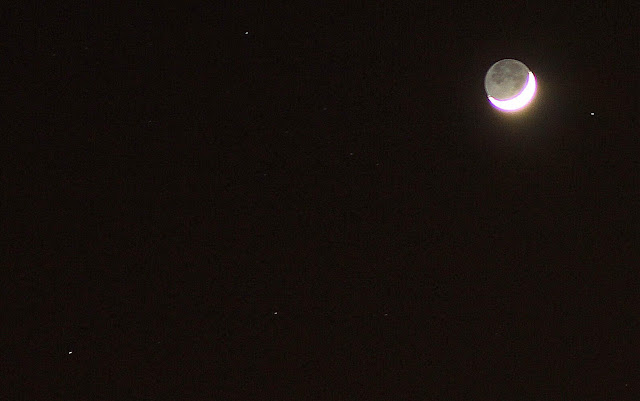 The moon in a crystal clear sky at night drew me outside to practice using my tripod.
The activity caused me to lose track of time.
My fingers however soon protested that it was below freezing outside.
I couldn't manipulate all the equipment with mittens or gloves on my hands; of course one can't manipulate equipment with frozen fingers either.
In fact, it was the fact that I couldn't feel the shutter button that finally woke me up to the fact that I had better knock off taking moon shots for the night.

Maddeningly, an even better moon picture taunted me on the way to work yesterday.
The sky was still barely lit with the breaking dawn and the full moon hovered like a giant pink pearl above the dark blue and snow white rugged mountains to the west.
To the east the sun struggled to crest above Mt. Olympus.
It was simply magical seeing the pink moon retreating from the valley to hide from the approaching sun.

Did you know there was a children's book written about when the moon and the sun are both in the sky at dawn?

You see, the sun is supposed to reign during the day and the moon by night, but sometimes it happens that something really exciting happens at night, something exciting like a fiesta!

When that happens, the author said, the reason is quite obvious:

The Moon was at a Fiesta!

Isn't that a fun little story to tell?

The book "The Moon was at a Fiesta" is a wonderful story and the link above will allow you to take a peek at the book.

I was lucky enough to have the author come to visit the school library back when I was a school librarians (my all time favorite job!) and I got to hear author Matthew Gollub read his book in person!

Posted by Thoughts on Life and Millinery. at 7:50 AM 8 comments: 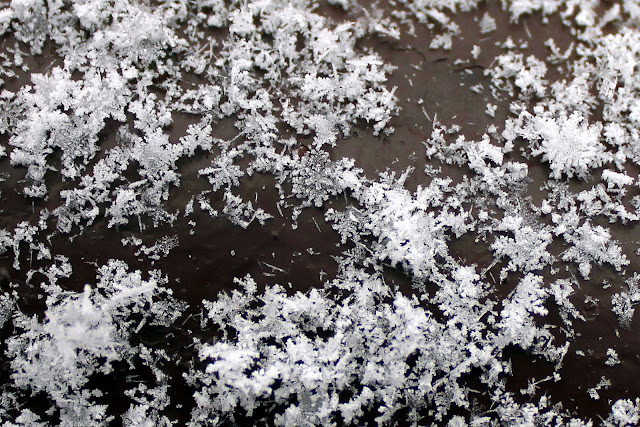 (Above: Snowflakes on a car up in Mill Creek).

After the driest Utah December in recorded history we were quite excited to read that we were to get snow sometime during this Saturday's early morning hours.

I peeked out the window at 5 am, saw a white winter wonderland and felt like Christmas morning had come at last.

The night before I had mentioned to Bernie how happy and excited I was that there was to be snow; he felt the same way and we agreed that we hoped we would never outgrow this feeling about an expected snowfall. 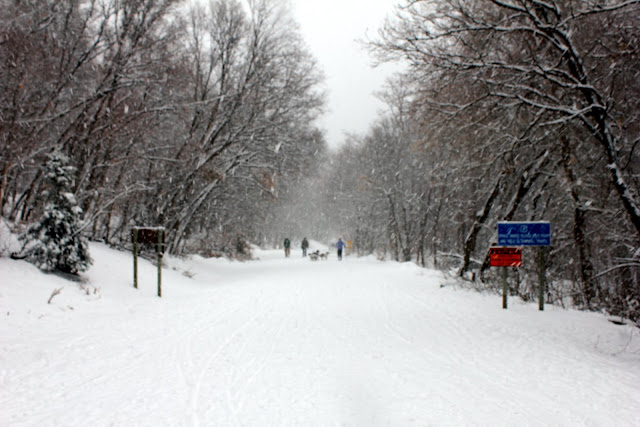 As the dawn broke, I thought I was seeing fog outside.  After stepping outdoors, I realized the fog was actually the finest snowflakes creating a misty like look.

The perfect kind of snow fall for picture taking!
By the time I showered and shrugged into my powder suit, and Bernie had shoveled the driveway, the snow had switched to what we call "dump"; the flakes were now dime and nickle sized.

Really messy for picture taking even with a rain sleeve over the camera for protection. I was catching big flakes in my eyes behind my glasses.

The camera was put away and we walked about a quarter mile up the canyon instead.  It was the most exercise I have had in a month!

I stopped frequently to stare at the beautiful star shaped flakes that landed on my mittens and sleeves. 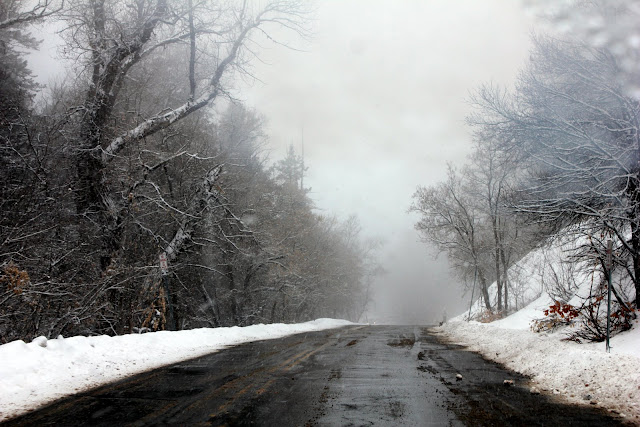 The drive back down the canyon where misty snow was mixing with the big flakes to create an otherworldly look. 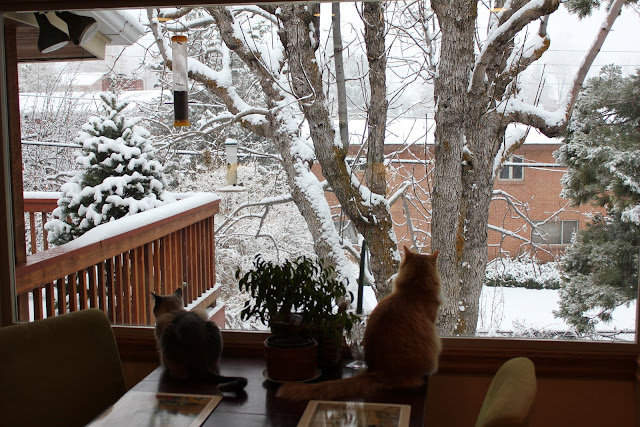 Speaking of otherworlds...two naughty kitties were carefully monitoring the world outside our window for us. 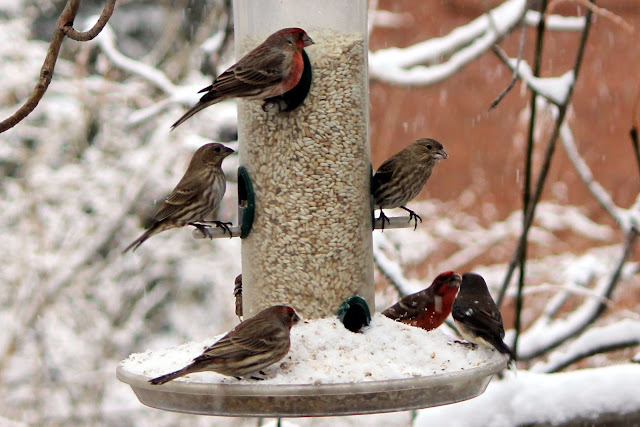 The birds were monitoring the cats inside the window as they filled up at the feeder. 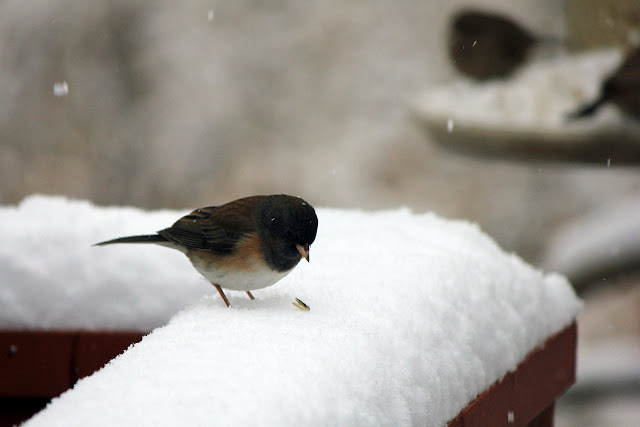 I like this photo of a junco a lot... 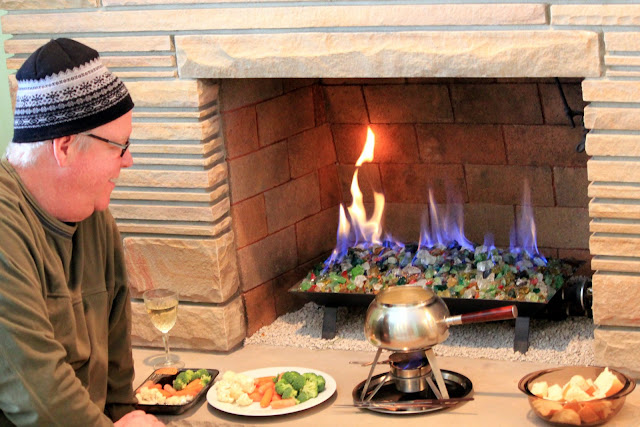 What to do for lunch after a walk outside on a snowy Saturday? 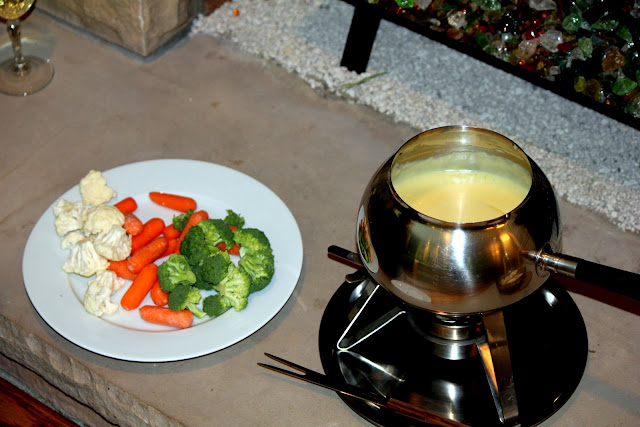 Fondue by the fireside of course! 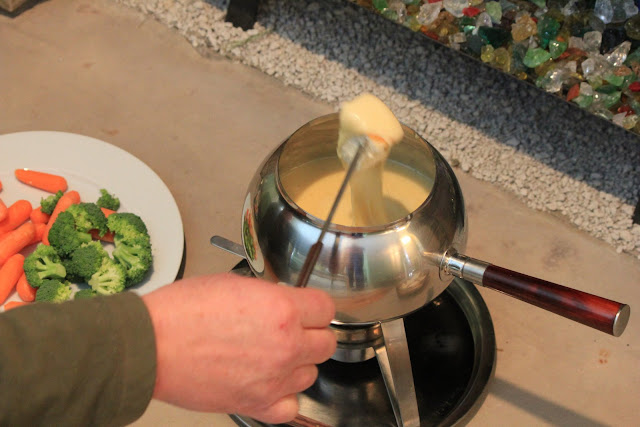 The last time we supped on fondue was a few years back on our last day up in the mountains of Switzerland, during a late May snowstorm. 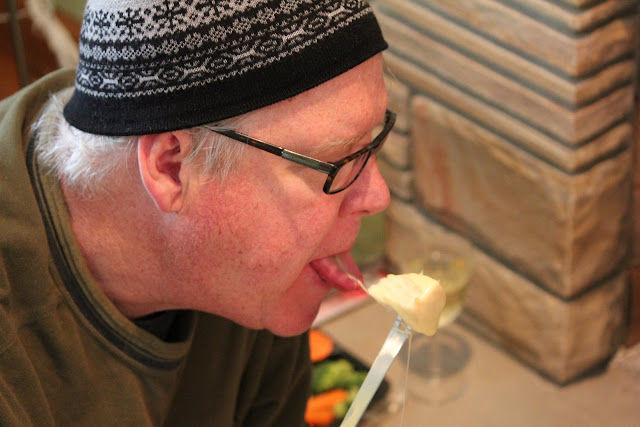 Just the thing on a January afternoon.
Funny thing is: the fondue pot was my mom's and I recall eating fondue from it as a kid.

After I married, she passed it on to me, and I had a few fondue parties with other couples back when our kids were not yet school age.
We've hauled that pot through multiple moves, each time pondering if we should bother to keep it.
Each time we remembered how good fondue tasted and some how found space for it. 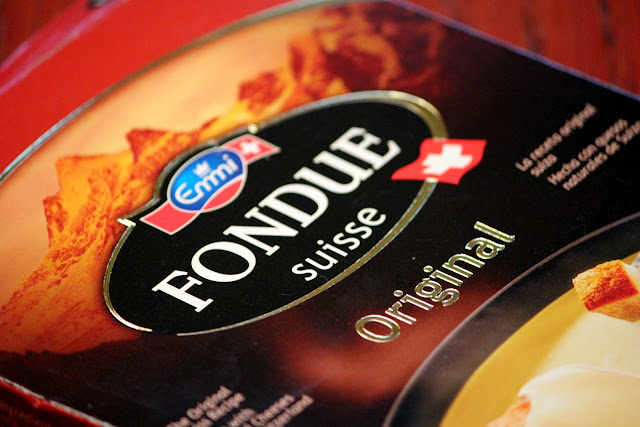 Funnier still:  I am pretty sure this is the same kind of prepackaged fondue that my mom used to use when she served fondue.
What could be easier than snipping open the foil pouch, slipping out the cheese mix, heating it up on the stovetop and then digging in with some bread?

Why don't we indulge in this treat more often?
Well...for one, the calories and for two, cleaning the stuck on cheese out of the pot is always a bear!
Posted by Thoughts on Life and Millinery. at 1:37 PM 9 comments: