Leave Israel as it is.

Update: Apparently Martha's Vineyard is likely to be heavily hit by Earl. Past situations like this curent one has oddly had Presidential "home base" destruction. Since President Obama doesn't currently have a home aside from the White House, he has stayed at Martha's Vineyard for his R&R time. I'll be watching to see what happens.

I'm watching the news of Hurricane Earl. Ever since it was named and its path announced, I was interested in how its timing would match up with the Washington DC "Peace Talk" events that are happening even as I type.

The stated goal of the meetings between Israel and the Palestinian leader is to tidy up plans to divide Israel into a two nation state.

For the past eight years I have been following one guy, Bill Koenig, who tracks US disasters in weather, earthquake, financial and political disasters as they occur and also US lead Israeli peace talks.

Koenig's documentation has been proven to be reliable by independent researchers. Each time the US starts getting involved with Israel "peace" talks that involve splitting up Israel, the US has very costly disasters.

Remember: God's promises to bless those who bless Israel but curse those who slight Israel.

October 30 1991 As President George Bush (senior) is opening the Madrid Conference to consider "Land for Peace" in Israel’s Middle East role, the "Perfect Storm" develops in the North Atlantic, creating the largest waves ever recorded in that region. The storm travels 1000 miles from East to West (instead of the normal West to East pattern) and crashes into the New England coast. Thirty five foot waves crash into the Kennebunkport home of President Bush.

August 23 1992 When the Madrid Conference moves to Washington DC and the Peace Talks resume. Hurricane Andrew, the worst natural disaster ever to hit America, comes ashore, producing an estimated $30 billion in damage and leaving 108,000 homeless in Florida.

January 16, 1994 President Bill Clinton meets with Syria’s President Hafez el-Assad in Geneva. They talk about a peace agreement with Israel that includes giving up the Golan Heights. Within 24 hours a powerful (6.9 on the Richter Scale) earthquake rocks Southern California. The Northridge, earthquake becomes the second most destructive natural disaster to hit the United States, behind Hurricane Andrew.

January 21, 1998 Israeli Prime Minister Binyamin Netanyahu meets with President Clinton at the White House and is coldly received. Clinton and Secretary of State Madeline Albright refuse to have lunch with him. Shortly afterwards on that day, the Monica Lewinski scandal breaks into the mass media and begins to occupy a major portion of Clinton’s time.

September 28, 1998 Secretary of State Albright works on the final details of an agreement in which Israel would give up 13% of Judea and Samaria. Hurricane George slams into the United States Gulf Coast. Winds of 110 MPH gusting up to 175 MPH. Hurricane George stalls. Clinton meets with Arafat and Netanyahu at the White House to finalize this land deal. Later Arafat addresses the United nations about declaring an independent Palestinian state by May 1999. Hurricane George pounds the Gulf Coast causing $1 billion in damage. At the exact time Arafat departs the country, the storm starts to dissipate.

October 15-22, 1998 Arafat and Natanyahu meet at the Wye River Plantation in Maryland. The talks are scheduled to last five days with a focus on Israel giving up 13% of Judea and Samaria. The talks are extended and conclude on October 23rd. On October 17th awesome rains and tornados hit Southern Texas. The rain and flooding in Texas continue until October 22nd and then subside. The floods ravage 25% of Texas and leave over $1 billion in damage. On October 21, Clinton declares this section of Texas a major disaster area.

November 30, 1998 Arafat comes to Washington again to meet with President Clinton to raise money for a Palestinian state with Jerusalem as the capital. A total of 42 other nations were represented in Washington. All agreed to give Arafat $3 billion in aid Clinton promised $400 million, and the European nations $1.7 billion. On the same day, the Dow Jones average drops 216 points, and on December 1, the European Market had its worst day in history. Hundreds of billions of market capitalization were wiped out in U.S. and Europe.
December 12, 1998 Clinton lands in the Palestinian-controlled section of Israel to discuss the "land for peace" process. The House of Representatives votes four articles of impeachment against Clinton.

May 3, 1999 The day Yasser Arafat is scheduled to declare a Palestinian state with Jerusalem as its capital. The most powerful tornado storm system ever to hit the United States sweeps across Oklahoma and Kansas. Winds are clocked at 316mph, the fastest wind speed ever recorded. The declaration is postponed to December 1999 at the request of Clinton, whose letter to Arafat encourages him in his "aspirations for his own land". He also writes that the Palestinians have a right to "determine their own future on their own land" and that they deserve to "live free today, tomorrow and forever."

October 11 1999 Jewish settlers in 15 "West Bank" (Israel) settlements are evicted from the covenant land in Israel. Dow Jones financial averages loses 5.7% in the worst week since October 1989. On October 15 the Dow lost 266 points. A hurricane slams into North Carolina. Next morning, October 16, a magnitude 7.1 earthquake rocks the Southwest in the fifth most powerful earthquake in the 20th century. The earthquake was centred in the California desert and did little damage but it was felt in three states.

August 2005 Jewish families were evicted from their homes in the Gaza communities as part of Ariel Sharon's "Disengagement" plan. This disengagement was a response to the American Foreign Policy pressure being exerted by Condoleeza Rice. As the world watched the Jews being removed from their homes, a weather system was forming in the Atlantic. This storm became Hurricane Katrina, which destroyed New Orleans, Louisiana - and an area the size of Britain, rendering thousands of Americans homeless and leaving thousands dead.

August September 2008 - The United States has been participating in “behind the scenes” peace negotiations on the future boundaries of a Palestinian state and the city of Jerusalem and a letter that would bind the next US Administration to an Israeli-Palestinian peace agreement.
During this time period the US has had record rains from Tropical Storm Fay, an intense Hurricane Gustav which cost multi-billions of dollars and disrupted life in Louisiana, and massive Hurricane Ike which ruined Houston, Galveston and other adjoining areas and US oil supplies.

Information from Bill Koenig http://www.watch.org/ All these disaster / coincidences (up to July 2005) are discussed in William Koenig's book, "Eye to Eye - Facing the consequences of dividing Israel"
Bill Koenig also points out disasters linked to the Annapolis conference
In 10 days, the United States experienced the largest flood in the state of Washington’s history, hurricane-force winds up to 127 mph in Oregon. Also, the largest ice storm in Oklahoma history produced the largest power outage in that state's history. These were two separate, back-to-back, $1 billion-plus disasters bringing the 2007 total to four billion-dollar disasters that coincided with U.S. pressure on Israel to divide her land.

What isn't mentioned above is the timing of Tropical Storm Allison which put Houston underwater. Look at this timeline:

On 6/8/01 Wm Burn (assistant sec state) meeting with Arafat at same time Storm was reforming into Tropical Storm Allison in the Gulf.

June 5-11: a total of 3 ft ( yes THREE FEET! I WAS THERE!) of rain fell in one day.
This storm formed over 1 day in Gulf, went up to Houston, back to Gulf and reformed into tropical storm Allison.
Houston closed down 3 days, cost 3 B in Houston, 4 Billion to State of Texas.

THEN, storm went NE from FLA thru PA.
Note that Texas is Bush’s home state. The National Weather Service later gave a talk in Houston, saying that they have NEVER seen a storm act like TS Allison did, and that they would be studying it for years to come.

8/9/01 Pres Bush (43) pressuring Israel to give up land and return to Madrid Peace Process. Mitchell Plan and US Resolution 242, 338, which demanded Israel retreat back to pre 6 day war borders. Give up Jerusalem, Golan Hts, all settlements on West Bank. In essence Bush telling Israel to retreat to INDEFENSIBLE POSITIONS AND BORDERS
Just 32 days after Bush’s 9 Aug speech:

9/11/01 Greatest attack EVER on American soil, 40 B in damages, attacking the financial heart of America.

There is more, you can read it here.

Meanwhile...I'm going to keep flipping my news watching between the Hurricane(s) and the White House. Maybe it is all just a coincidents.
Or maybe not.
Posted by Thoughts on Life and Millinery. at 11:24 AM 2 comments:

Because they are also loved.

There are the people who daily are fasting then celebrate right now.

I must remember that they are loved by God and He desires that they know their Savior.

These pictures helped me to do that.

Take a look by clicking on the link.

I think you will see what I mean.
Posted by Thoughts on Life and Millinery. at 4:04 PM 2 comments:

LOVE this idea.
I could have my photoshopped picture printed on my hand bag, then head out the door looking like fresh heck knowing all I had to do was hold up my purse to make me look lovely!
OR maybe I could put Tig's face on it when I feel catty.
Michelle Obama for...um...I don't know.
My mind is spinning.
From Pink Villa website.
I am still addicted to fashion news from India. Can't explain it. Just riding the phase for all it is worth!
Posted by Thoughts on Life and Millinery. at 11:08 AM No comments: 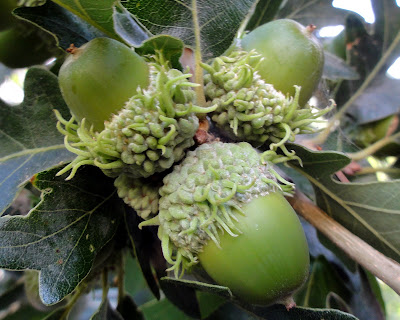 Maybe they have curly tops every year at this time, but I have never noticed this phase in acorn development before. 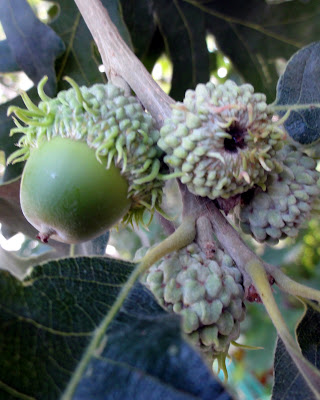 Is this normal?
Is it a form of an oak "sport" ? (A sport is a genetic variation that spontaneously occurs in plants. When one is found in ivy, it can be named after the person who first finds it. I look at ivy all the time hoping to see a sport!)
Is curly acorn cap a sign of viral or pest issues?
Anybody out there seen something similar on the oak acorns in your area?
(Kinda cute isn't it? I do hope it is nothing to worry about!)
PS: Trying to find out about these things and saw this fun post with a great idea for making beeswax acorns. A bowl full would smell wonderful!
Posted by Thoughts on Life and Millinery. at 6:26 AM 6 comments:

watch here
Posted by Thoughts on Life and Millinery. at 7:25 PM No comments: