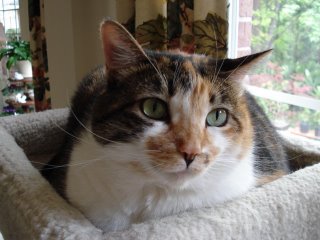 This is Jennyanydots, so named after the poem in "Old Possums' book of Practical Cats", by T. S. Elliot. The musical "Cats" is that book put to music.

Jenny was a flood kitten, found with her family in a cave right after Tropical Storm Allison hit Houston. I got her at the Animal Shelter when she was 8 weeks old. She rolled out of a ball of playing multi-colored sibling kittens, looked into my eyes, and it was a done deal. She was mine.

She was so tiny, and had all the possible colors and patterns that could be found on any cat. "Like she has tidbits of everything" I commented. So she received her nickname. Tidbit. Except now at 16 lbs., she is more like a buffet.

Our vet does not believe in putting cats on a diet (Tidbit purred when she heard that!), but she truly does have eating issues. Perhaps those early scary days during the flood affected her. Who knows. Besides sitting, sleeping, and staring into space, her most favorite activity is eating, and fantasy nursing. On me.

That is, she jumps up on me when I am in bed, slips under the covers, and buries her nose into my ribs. Her eyes roll back in her head, and she closes them, starts up her deep, deep purr and begins to knead, like a baby kitten, rhythmically and for me, painfully, if I don't keep up with claw clipping.

A few minutes later she snaps back to reality, gives me a look like "we will never speak of this to anyone", and hops off the bed, leaving me with a wet cat drooled saturated top.

Evidence, I guess, that we really both are a little nuts!