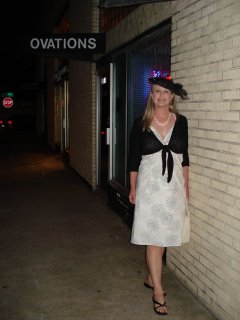 Inga is an interesting hat. My millinery guru Kate Pernia (see her blog at: http://hatsbykatrinka.blogspot.com) created this hat design, using an asymetic shallow bowl she found at Ikea.

The hat itself is made from sinamay, and features black netting with dots, and a white mother of pearl buckle in the back. It is held on the head with a strap made of sinamay, which encircles the full part of the back of the head.

I took a class from Kate to learn how to make this hat, and it was really fun. First we wet the sinamay in water that had plain gelatin mixed into it, to give the sinamay some sizing.

Then we covered the glass bowls in saran wrap, stretched the sinamay on the bowl and held the sinamay in place with clothes pins.

After it dried, we trimmed the excesss, and folded the edge over velvet tubing that had been internally wired. We stitched the "hem" edging close. Made a bias band for a head strap, and stitched that on the inside. Probably the most tricky part, to get the band just right for fit and tip of the hat. 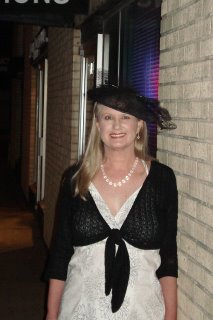 You can see that it is a rather sheer hat, nice and light weight for Houston's heat. It just sits on the top of the head, so your hair doesn't even get messed up!

I have made four versions of this hat: This one shown, a similar one in off white, a straw colored one with a flower over the left eye, and a wild buckram framed one, covered in black suiting and with a rakish vintage orange feather. The feather is from the 1920's. That was a time period when using black and orange together did not suggest Halloween!

I am pictured at Ovations, on my way to attend Chicks on Tour, a women's comedy group. The theater had cabaret seating, and this was a perfect outfit for the evening.

Posted by Anonymous at 7:51 PM