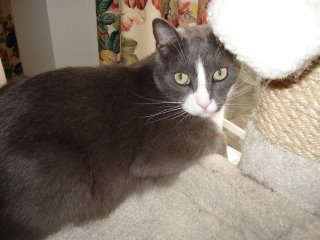 Hart is another replacement cat. Our Mac, The Very Best Cat Ever, had died unexpectedly of bone cancer. We were crushed, and wanted a cat who would look a bit like him.

This little gray guy was at the shelter, and he so actively related, rubbing and purring, and running back to me when taken from his cage, that I hoped he would have not only Mac's colors but also Mac's strong relation oriented personality.

Hart was brought home the same day that I received word that my heart was just fine. Great news, as I had undergone multiple tests to determine why I have such a slow heart beat (usually 48 bpm, same as President GWB by the way, but he works out hard and I don't).

Hart is very "kid" like-he is always up for play, very active, a pest at times, curious, and generally aware that he is not the alpha cat. Tiggie holds that position, and he defends his title when challenged.

Hart is thought to have some Russian Blue in him, as he has a very busy tail, and that actually is one of the characteristics of the breed that is looked for when judging Russian Blues in a cat shows. Hart's white bib and booties of course disqualify him from any pure bred status.