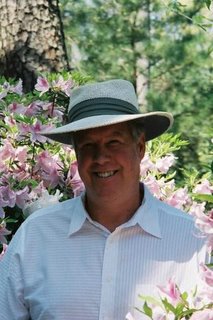 Haberdashery: I always thought that was the word used to describe men's hats.

The term actually means "dealing with men's clothing and accessories". Accessories, for men, used to ALWAYS include hats. Just look at the "old" movies (old, right up to the 1950's) and notice how ALL the men wear hats. Brim styles defined personality. A hat worn low on the brow suggested the man was suave, or dangerous. Pushed back on the head, the guy was probably a bit clueless. Tipped over one eye, a charmer, or a rake.

(Picture is of my Bernie, at Bayou Bend Garden, Houston, TX.)

Cowboy "flicks" used to use hats to signal the man's character. The four men from Bonanza for instance: Imagine Hoss' big bulbous beige hat on Little Joe! Changes everything, doesn't it?

My grandfather earned his living working in a Men's hat store in San Diego. I have seen a picture of the store's opening day, I think back in the 1920's. I'll have to check the title of the store again.

Dashing: definition: Marked by smartness, especially in dress and manners.

I think wearing a hat automatically makes a man look "dashing", and puts the "dash" in Haberdashery!

And as one of my naughty hat buddies once said:

You'd think the men would figure this out. "Victor's Secret" and "Fredricka's of Hollywood" would consist solely of fedoras, homburgs, gouchos and gamblers. In felt and straw!

Just to expand the idea, and maybe cause a few daydreams, check this link for men's hats:

Then take a quick trip to St. Paul to see a modern day haberdasher:

Or perhaps one of those dashing trilbys...often confused incorrectly with fedoras. Handsome guy that Bernie! Keep 'em in hats, I say. My guy has 2 winter fedoras, both Italian, but we haven't yet sprung for that Fino fino Borsalino for the summer. K Q;-)

There is something about a man in a good hat, with a winsome smile! You have a good one, there, Jill!