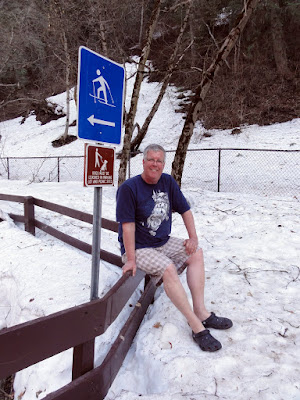 One day last week when it was nice, and warm enough to wear shorts, we decided to take an after dinner trek up Millcreek Canyon to see what might be seen.

It was spring, after all. Perhaps some wildflowers were ready to debut? 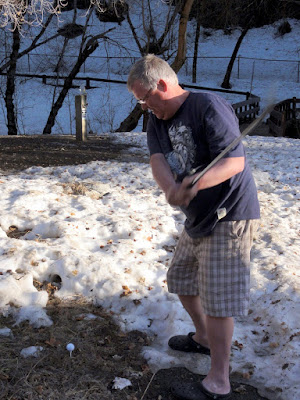 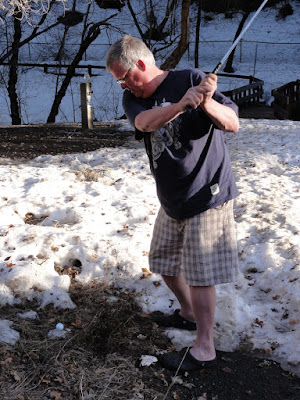 Snow was still on the ground along the Creek. 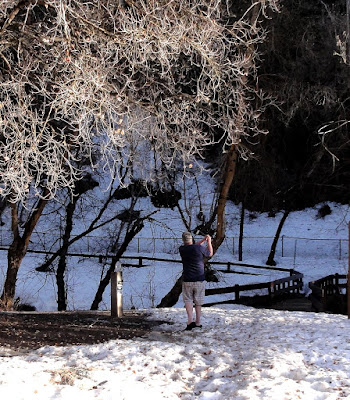 The ever optomistic Bernie made the best of the situation.
(He also discovered that Crocs have distinct drawbacks when used while golfing in the snow.)
The next day the predicted snowstorm came, and came and came some more.
I had never experienced five straight days of snowy weather before.
We planned to head to Moab for the weekend, but the whole town was booked solid for an event.
We decided we would go exploring and flyfishing on Saturday instead.
Saturday dawned snowy, rainy and out and out soggy.
Sunday: Ditto.
Today it is nice outside (a lot of good that does us on a Monday...)
More snow is predicted for Thursday, and maybe Wednesday and Friday as well.
Anyone up for some time on the whites?
You know, the Salt Lake City version of the greens?
The fees are cheap...the beverages are cold...
I'm just not sure how you can spot a little white ball that has landed somewhere in the snow.
Posted by Thoughts on Life and Millinery. at 9:23 PM

Gotta paint it red, I'd think! We once got snow on June 1 when we were in Switzerland. Enjoy. Everything is blooming here. K Q;-)

Well. .we have hail again today ..I'm not sure what that means but I sure don't feel like gardening.
The pictures of the golfer are great. Way to go B. show the rest of us how to think positively.

We need a sense of humour when the snow is still hanging around in May!