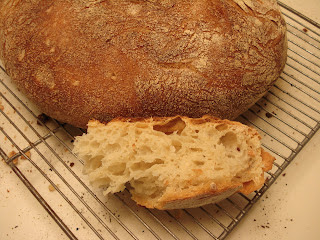 In case you hadn't noticed, "No-Knead Bread" recipes have been kicking around the Internet and newspapers for awhile now.
I finally got around to making a loaf myself a few months ago, and decided that both my kids needed to learn how to make this simple, yet delicious and "showy" bread.
The bread has a slightly sour dough flavor and a beautiful crisp crust.
The interior of the bread has big holes like many of the artisan breads that are now being served in those trendy restaurants, to dip into flavored oils and vinegars.

First step was to find an apron.
That's my apron that she is wearing in the picture below.
I bought it for myself as a teenager.
It was so "mod" with it's orange, lime, fuchsia, and hot pink OWLS!
Can you say "That sure looks like the 1960's to me!" ????

(Laura thinks the apron is cool. Very retro. No, she can't keep it yet.)

The recipe calls for:
Three cups of flour,
1/4 teaspoon yeast
One and one quarter teaspoons of salt.
One and one half cup of water 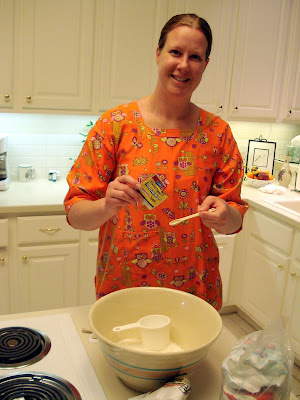 Above is Laura adding the yeast to the flour and salt mix.

The bowl was a wedding shower gift from my sister-in-law. I've had it for over 30 years now!
It is a huge bowl and weighs a ton, and I think of her everytime I use it, as it is a perfect bowl for large batches of things. She cooked for seven children, large batches were the norm for her! 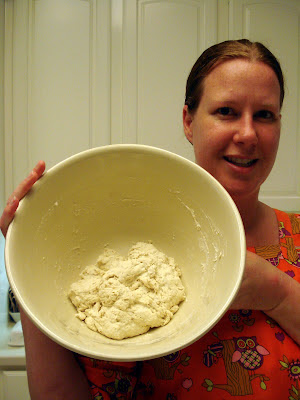 Next you add the one and one half cup of water to form a dough. Don't over mix; just mix it until the flour is all dampened and stuck together. It should be kind of wet.

Cover the bowl with plastic wrap with the dough inside the bowl and put the bowl someplace warmish, like the top of your refrigerator, for 12 to 18 hours. 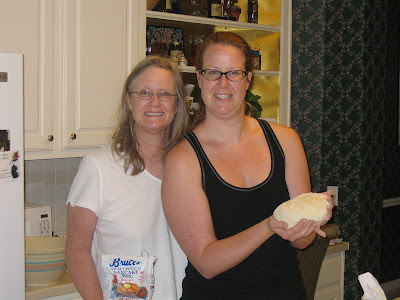 ( Picture above: I was not feeling too great. No make up, just us both looking cruddy.)

Put flour and a little corn meal on a smooth tea towel (not terry cloth)
Take the dough out of the bowl.
Put the dough on the floured towel. The corn meal will add a little extra crunch and also help keep the bread from sticking to the dutch oven pot that is will be baked in.

Now you can do one of two things:
You can either fold the dough back on itself and let it rise again for another hour. (That's the above picture example)
About thirty minutes before the hour is up, turn on your oven to 500 degrees F.
AND put a Dutch Oven (or two quart Pyrex with lid) into the oven to heat up to 500 F.
(Do not use Pam or any other oil in the pot)

You can just fold the bread over itself a few times until it becomes a flattened ball.
You still need to heat up a Dutch oven as directed above.

CAREFULLY take the hot Dutch Oven out of the oven. 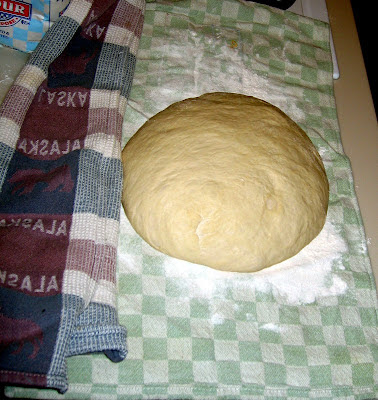 (This dough, pictured above, was allowed to rise twice. Notice the Alaska towel...I try to get tea towel from place where we vacation. Makes kitchen work a nice "remember when" experience.)

Working quickly, lift the dough on the towel over the pot, and flip the towel over to drop the bread dough, (seam side up if you have folded the dough) into the Dutch Oven.
(Do not grease or Pam spray the pot.)

Cover the Dutch Oven with a lid, and bake the bread at 500 F for 30 minutes covered. 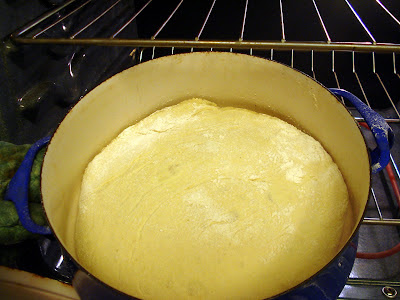 Take lid off and return to the oven for an additional 15-20 minutes. 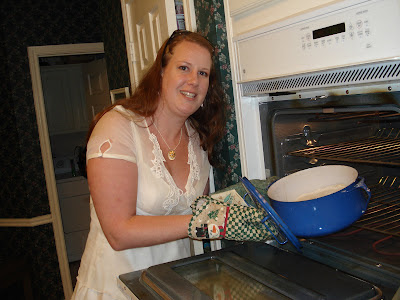 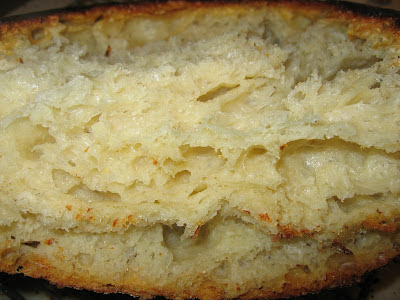 The bread is delicious with dipping oil or butter.

We immediately made a mess with it. 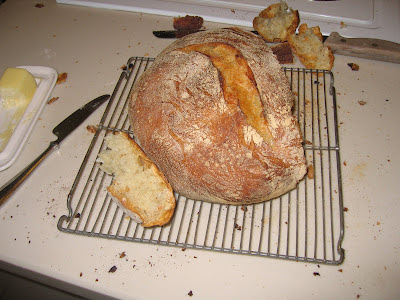 The 12-18 hour "rising" time allows the small amount of yeast to develop a wonderful flavor, and kneading is not required to develop the bread's gluten.

We tore into this loaf straight out of the oven. If you allow it to cool, the slices will probably look a little neater.
(WHO CARES about neat when there's fresh bread coming out of the oven?)

Have fun...even if you are not feeling too great, or planning a busy day.

Posted by Thoughts on Life and Millinery. at 10:44 PM

Oh that looks just fabulous. When I make that for Terry he'll be just raving about your recipe.

I love the Tea Towel Idea. I've always tried to come up with a souvenier idea but this is the best I've heard of.

This is the perfect excuse for me to run out and buy a dutch oven. I owned one years ago when I was a young bride. I didn't pay close enough attention to the jam I was making and scorched the bottom right out of it.

Baking with your daughter . . big sigh.

For all you reading the post, Yes! It is wonderful! and Yes! it is easy to make.
Please pardon the lack of makeup. I should know by now that any pictures taken by my mom are subject to posting.
I really am pretty in real life!

I'm back from town with the pot.

I'm just going to write down the recipe and i'm gonna get busy.

I should Terry the bread on your post when he came in for lunch and he looked at me as if to say. Looking at bread doesn't help me.

Hmmmmmm... I can smell that bread aroma all the way here...there is nothing like the smell of bread baking and nothing like the taste of it warm out of the oven!!
I always used to say "put me on a bread and water diet - no problem!" but then I found out I was Celiac so no more bread..but I can dream!! and smell! and drool!

I hope you are feeling better, Jill!
And Laura, you ARE pretty in real life - isn't blogland real life?!?

WOW! I guess I will just have to try making that bread sometime as it does sound simple enough to do.

Demara; yes, the corn meal and flour mix on the towel that has kept the dough from sticking TO the towel is the same mix that will keep the dough from sticking to the pot as the bread bakes. That the tiny bit tricky part...making sure the side of the dough that has the flour and corn meal winds up against the bottom of the pot. By folding the bread your wind up with the mix over all the dough, so you can kind of play with how you want it: bread with a touch of flour/corn meal all over, or just on the bottom.
This recipe is pretty flexible. The bread is done when looks brown and sounds hollow when tapped.

Lovella and I share recipes all the time and so she called me yesterday and said "you have to visit Jill's blog, she's posted a bread recipe you have to try." I asked if she had already started to make it, but she was going to need to run out and get a dutch oven first. This morning my Granddaughter Summer, my daughter Adrienne and I are heading out to see the baby chicks at the farm. I can bet that the bread will be rising, or even better, coming out of the oven as we arrive. T. and I would have to fight abit if sharing was to happen. (On our Palm Springs trip we dicovered our mutual love for bread.) Better yet...I'm going to wip up a loaf myself right now before we head to the farm. Happy Birthday. Kathy

Oh, Jill, that bread looks so good! I could live on a diet of homemade bread - if only too much was not such a bad thing. I can't wait to try it...

I love the tea towel souvenir idea, too...that's marvelous! My fridge is too full of magnets!

I just came back to check on the temp and had a crazy time finding the recipe.

Do you know you don't have a label "recipes"? Inconceivable.