A slow day...at least for me.
Jeff headed out to work early, and Bernie saddled up on his lap top for work as well.
I dug into some laundry, clean up, and odds and ends. 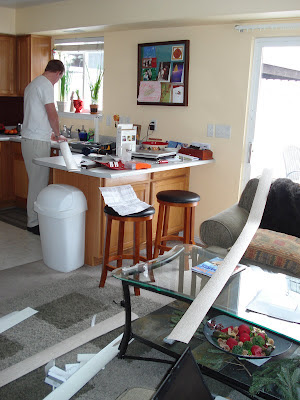 Later on Jeff took down his old vertical blinds and put up the new ones. His old one were plain white, no texture, the new ones are beige with a straw cloth/linen look. 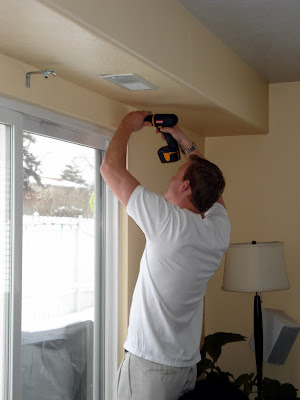 Naturally they were not exactly interchangeable. A bracket had to be moved...then holes filled in and touch up paint. Hurrah for power tools though. 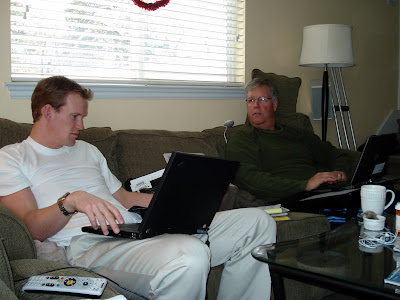 Back to work. In between work our next family vacation was booked: Hilton Head/Charleston/Savannah. Bernie found a great flight package. Yeah! 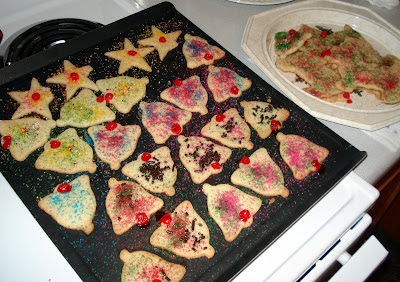 I finished up baking the cookie dough that Laura had made. 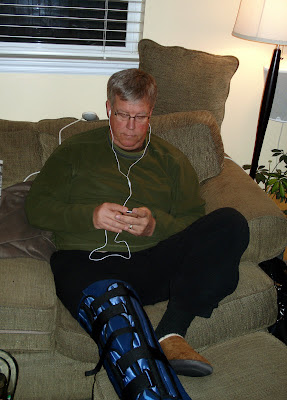 Bernie got an ipod from Laura for Christmas.
It is taking a little time to figure out how to load up the music and other features, but now Bernie is in another world with music and drugs all the time.
Which, in this case, is a good thing. 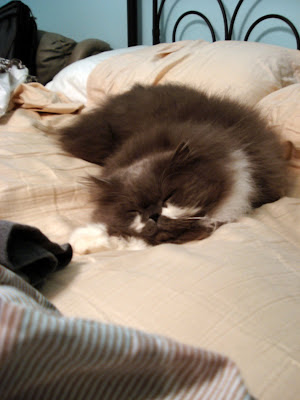 Meowsie decided it was a good day for an all day nap. 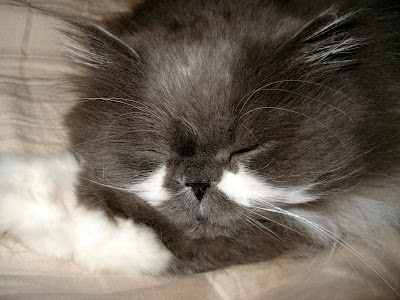 ALL day nap. Power snooze. Drug free too...well...we did give him some catnip in the morning. He did a few hops and rolls and batted at a string, so naturally he was bushed after that.
Snow was predicted all day, but all we got were a few tiny flakes now and then. I checked on my snowman several times just to make sure he was still there.
He was.
(Big smile!!!) 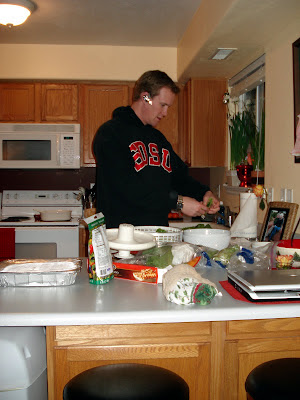 Jeff made an awesome salad while chatting with the grandparents. He even used the last of his garden's tomatoes in it. Yesterday I had him mix up a batch of "No Knead Bread." He baked it in a Corelle casserole dish. (You can just see the new blinds behind Jeff.) 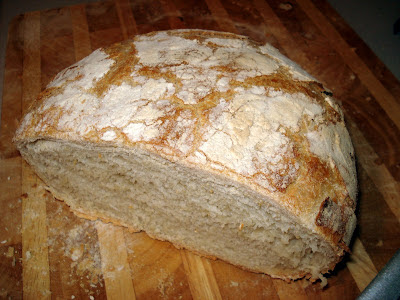 Oh man...this stuff is so good. Jeff made garlic toast out of it, and we had it with lasagna and salad for a dinner while we watched the Oregon State University Beavers play in the Emerald Bowl against Maryland. 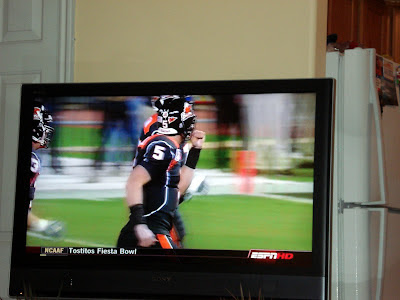 Beavers won!!!!
Go Beavers!!!!
Today Jeff and I are going to a yoga class. I've got to get some exercise, and he swears that yoga is the best to keep limber. Tonight we'll see the lights in Temple Square, and other than that the day is unplanned.
Aren't unplanned days fun?
Today is the fifth day of Christmas you know.
How are you thinking of celebrating?
Getting five golden rings is sooo predictable you know.
I'd love to hear what you are going to get instead!
Posted by Thoughts on Life and Millinery. at 8:38 AM

Aw! So jealous! Good thing I've got my very own grandparents to make everything all better! Love, Laura

Jeff is handy with the power tools, he's handy in the kitchen, he's gainfully employed, and he's good-looking to boot. So, why is he still single?

Ahhhh...a vacation to the east coast! I wish Doc & I had spent more time in Savannah a couple of months ago, but it was a spur of the moment trip and completely unplanned. We just packed a bag and jumped in the truck and took off with an assortment of maps. We're hoping to return someday soon.

I can identify with Meowsie. This illness has me taking those power naps, too. Nine hours straight-through on Thursday night, nine and a half hours last night...and I'm still sleepy.

It's not for lack of trying that he is still in the market. A couple of almost fiances.
His criteria: Christian, tallish, (Jeff's 6'3") athletic would be nice. Somewhere around 24-30 years old...prefer a girl from an intact home, MUST NOT BE ALLERGIC TO CATS (that last one is from me...I tell my kids the first question to ask a prospective date: are you allergic to cats? If the answer is yes, say good bye. Second question: Are you a Christian? You can convert someone, but can't convert an cat allergy, right?)

I've told him if he hasn't found someone by the time he is 30 I am actioning him off on ebay.
Ohh...I'm gonna be in trouble for posting this...maybe he won't read the comments....

5 pieces of fabric LOL! Did it too.

JIll your comment is even more entertaining than your post.
The bread looks fantastic. I'm going to start some tomorrow for new years eve.
The blinds are very good. Warm tones are great and the texture is very nice too.
Bernie is looking better. At least he doesn't look as drugged. Hey if he can book a family vacation, I'd keep hime slightly drugged.

My daughter (my redheaded Laura) fits the criteria to a T, but she is already happily married (and she married an even taller guy - he's 6'7"!)

Well, maybe we blogging mothers can put our heads together and get all of our offspring happily connected. After all, my daughter and her hubby "found" each other through an Internet buddy search!

Thanks for visiting my blog.

On the 5th day of Christmas I get to pick up my 3 pairs of hemmed pants that I bought on boxing day. That beats 5 golden rings right????

I bet Bernie thinks he's back at woodstock......music and drugs. Feel free to reorient him periodically throughout the day lest he take off and purchase tie-dye t-shirts on the 5th day of Christmas.

I "celebrated" by having the laziest Saturday I can remember! Ate leftovers, so no need to cook. Took down the remaining Christmas stuff and packed it away. Got into the Word for a really long time. And started a book on intercessory prayer by Dutch Sheets that I can hardly put down! A glass of port, and I am ready for bed! I'm thinking of repeating this day again tomorrow, Monday, and Tuesday!
Isn't that bread fabulous? I have some "rising" for tomorrows dinner. I even gave my oldest daughter all the ingredients and my new Martha Stewart enamel/cast iron pot for Christmas!

By the way, Jill, could you share that bread recipe? It certainly looks yummy!

Interested in knowing how the yoga class went! Any pictures?? My daughter thinks that it is a great way to stay in shape. Such a versitile son!!! Maybe this new year will bring new prospects for both your amazing off-spring. It would be hard to blend in with your family though. Oh, the joys of having so many blessings, and giftings.