After the present opening marathon, we decided we need to get out of the house for a little bit.
Jeff had some stale bread and knew where some needy water fowl were waiting.
So we carefully loaded Bernie into the car and away we went. 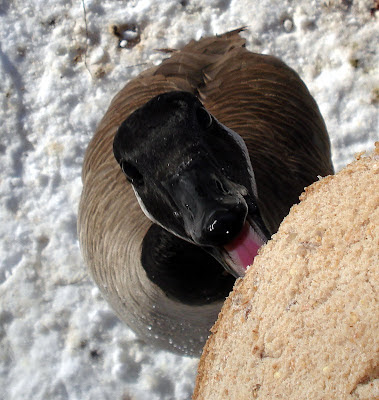 Ah...poor little Canada goose. Look at the cold water droplets on its breast and little pink tongue.
It was so sweet and friendly that I enjoyed feeding the bird.
Especially after Laura pointed out that feeding them while wearing gloves makes it a much less scary task. 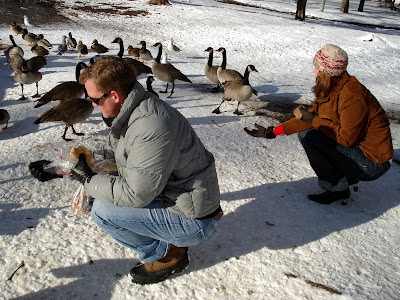 Don't the kids look like they are pretending to be birds too? 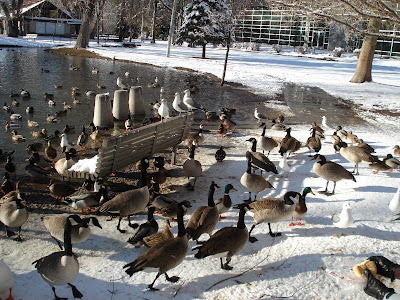 There was quite a crowd. The seagulls were grabby little thieves as usual. But since they DID save SLC from grasshoppers one time years ago, they think they are entitled.

This was the BEST goose! Or gander...whatever, it was really friendly and didn't grab. 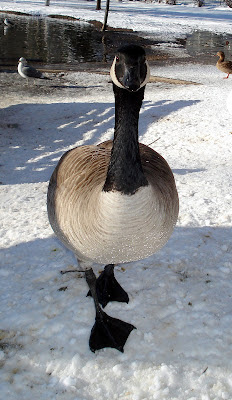 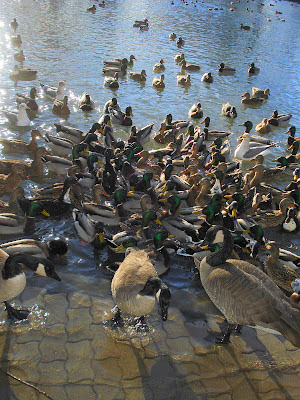 It was pretty funny watching the mallards cram together in the water vying for a bit of bread. 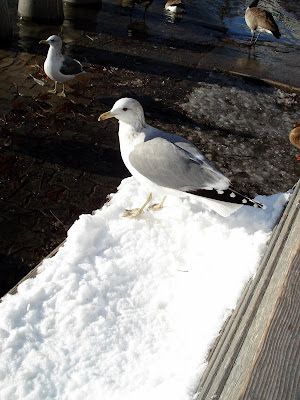 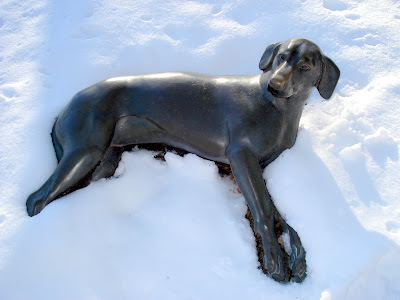 Neat sculpture of a dog next to the duck pond. Obviously the dog is tuckered out from fetching ducks from the water. 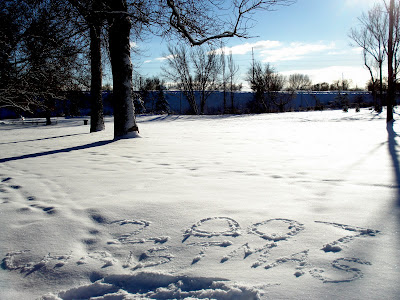 Laura reminded me to take a picture to use as a first slide. 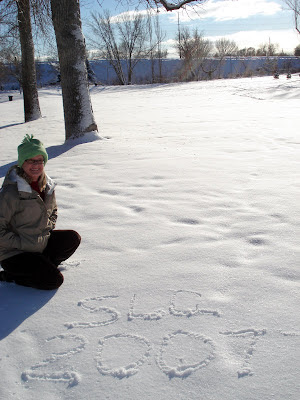 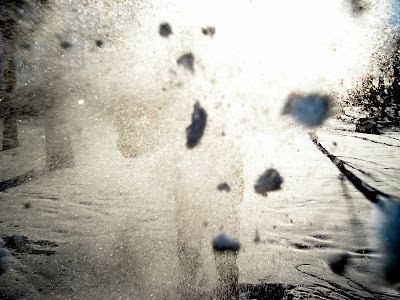 One can not trust boy children near snow. Jeepers it IS cold out! 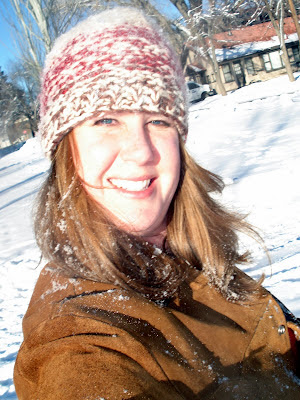 Laura had the camera....and thought a self portrait was in order. 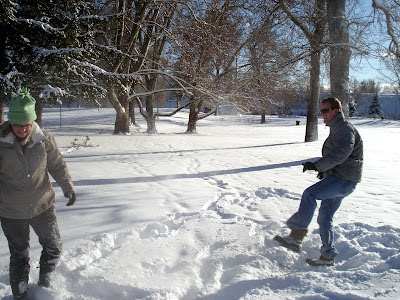 She was able to capture the mother-son snow war at full tilt. 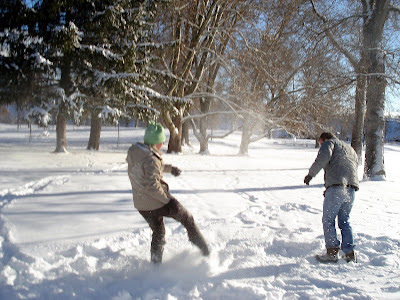 Eventually it got down to me kicking snow. Real finesse there huh? 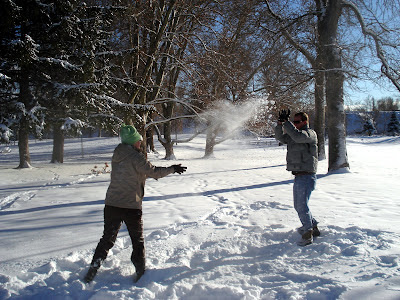 The snow is so powdery I can't make a decent snowball to properly smack Jeff. 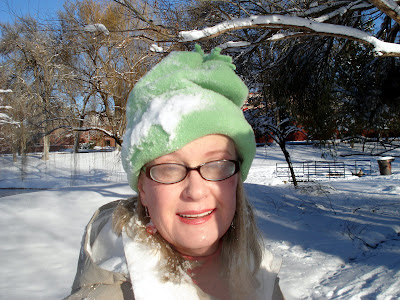 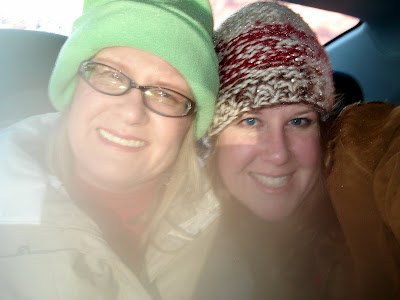 Laura and I snuggled in the back seat while Jeff drove and Bernie fought nausea. What a great outing! 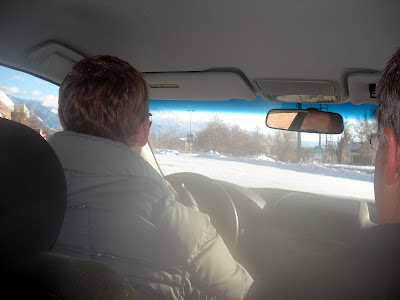 Oh look! A parking lot covered with snow! A perfect time to do donuts and practice slides.

Wow...that is such a good idea! Whee!

After we got home and Bernie recovered from the wild ride WHILE nauseated in the first place, I got started on dinner while the rest of the family enjoyed a heart warming holiday film.

I enjoyed cooking in Jeff's kitchen so much! It was like playing.

And the lamb smelled so good as it roasted. The marinade was orange juice, white wine, garlic, thyme, rosemary, pepper and olive oil. The six pound lamb roasted directly on the oven rack in one hour. 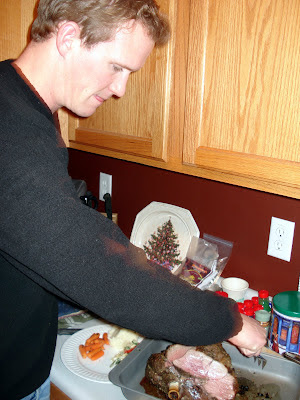 Jeff did the carving. 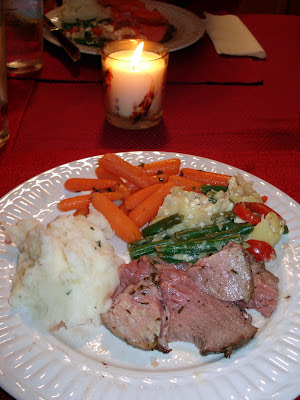 Dinner by candle light.
It was so delicious we were just going nuts! The whole meal was cooked starting at the beginning of the movie and finished as the movie ended. Sweet timing! 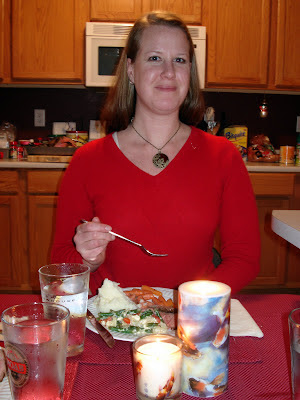 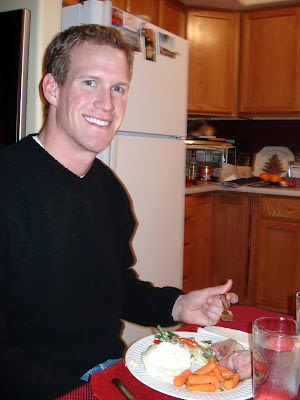 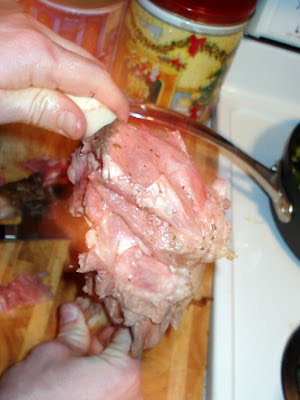 Added fun: After boning out the roast, spend some time flexing the lamb's leg's knee joint while discussing the ligaments that could possibly be torn in Bernie's legs.
Jeff pointed out the ligaments that he had broken, then Laura took a turn pointing out the other possible ligaments.
They kept at it until Bernie said it was making him sick.
I wonder when he got to be so sensitive? 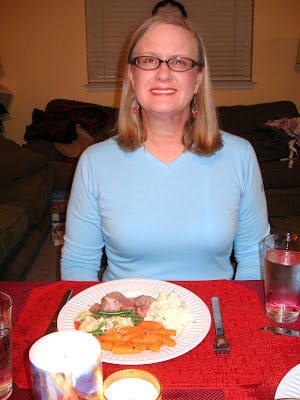 Posted by Thoughts on Life and Millinery. at 10:45 AM

I had no idea that geese had tongues. This is so educational, Jill.

I love that first shot of the goose eating the bread.

Oh I just loved spending that time with you. Thanks for feeding my goose.
Your dinner looked just wonderful. Do you know, I have never made a leg of lamb. It looks just fantastic. Poor Bernie. I hate being carsick never mind before I leave the house.