It was an official "White Christmas" here, as it snowed most of the night last night. 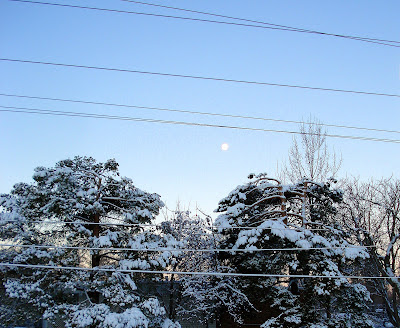 The morning sky included a full moon above the snow covered trees. 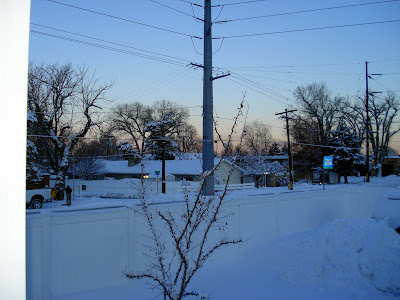 And a rosy sunrise. How special! 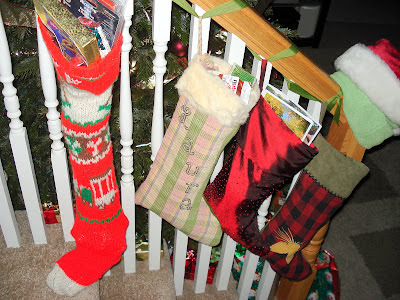 Santa had filled the stockings...in fact several Santas apparently stopped by during the night.
Later there was Christmas stocking overflow on the the stair steps below. 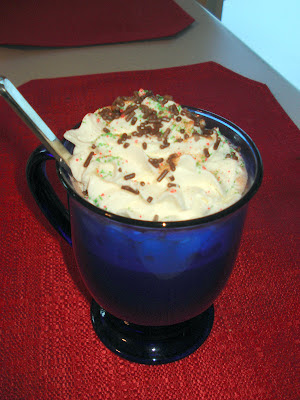 Laura got us started with hot cocoa trimmed holiday style. 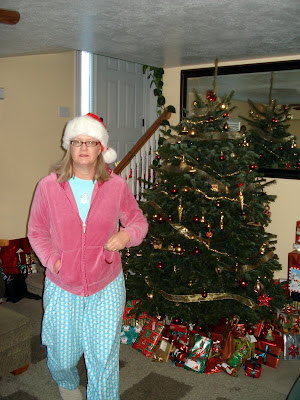 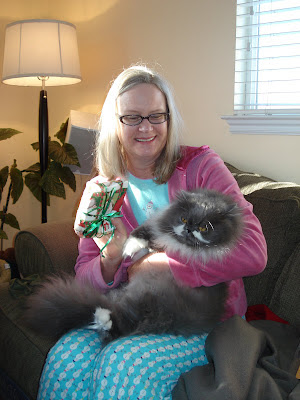 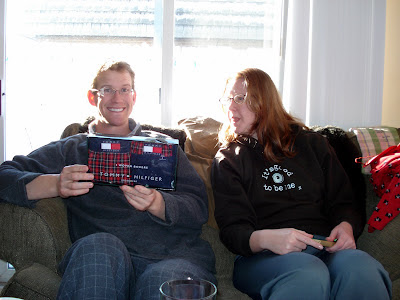 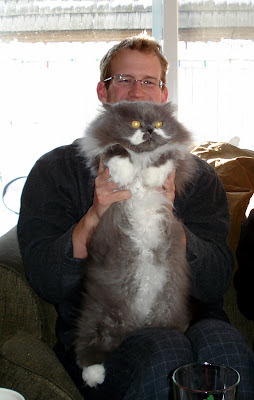 How big is Meowsie?
SOOOO Big! 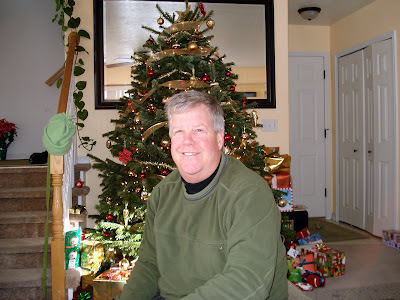 How drugged is Bernie?
SOOOO drugged! 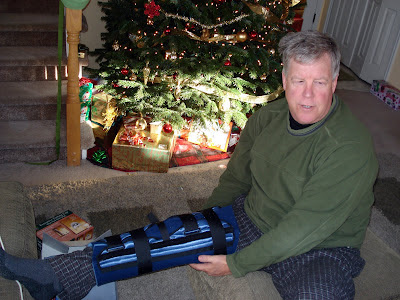 At least he is walking a little now. And playing Santa too. 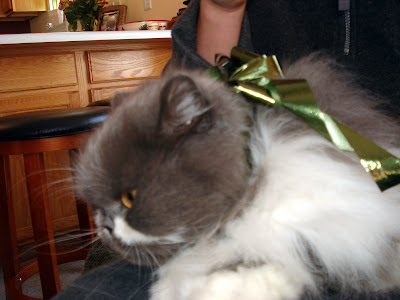 Time to decorate the cat. He let Laura put a Santa hat on him a few days ago.
Meowsie...it is a slippery slope once you let them do that. 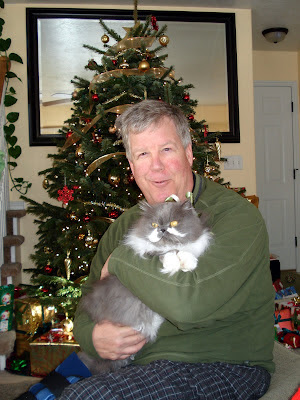 Ah, Meowsie with Gramps. We just love having our grandcat with us this Christmas.
(Is everyone out there with grandkids enjoying this parody? I sure hope so!) 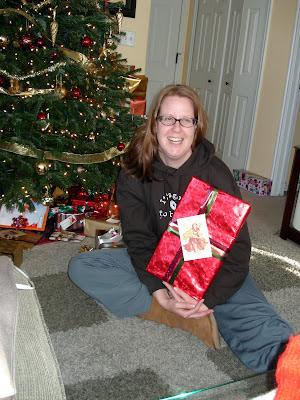 Let's get serious with the presents. Laura counted roughly 88 gifts under the tree. This is going to take awhile.... 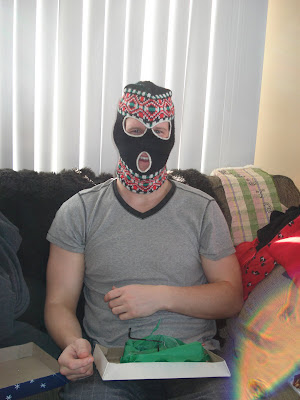 Thanks Grandma D! Jeff always dreamed of being a terrorist/bank robber! This Christmas ski mask is just perfect! 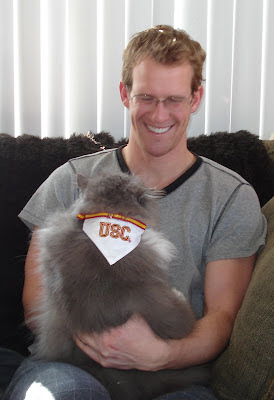 Jeff is a USC fan. Now Meowsie can be an official fan too, thanks to Auntie La-La. 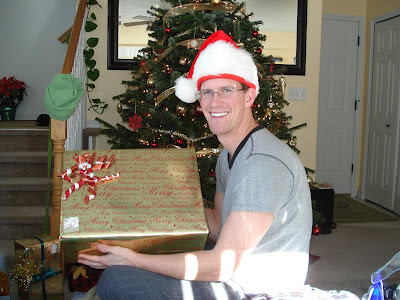 Funny how the Santa hat kept getting passed around. Bernie got his Nano Ipod...at last! He is SOOOO happy! 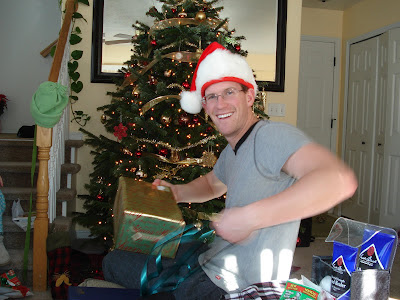 Is this the big gift to Jeff from Laura? 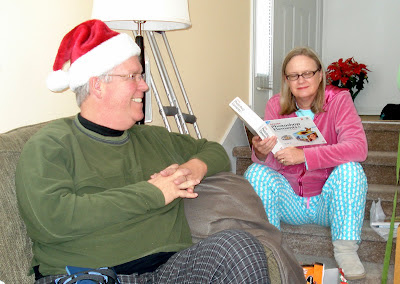 I got my big gift...Adobe photo shop! Good bye wrinkles, weird background people in my photos.... 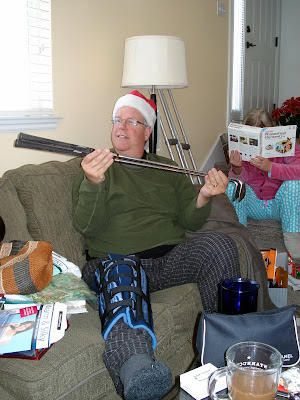 I guess people kept opening gifts after I got the Adobe Photo shop... 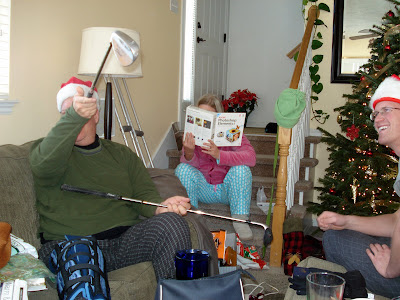 I wonder what they got? Actually I don't wonder...I totally lost interest in the whole present thing after I got the Adobe printshop... 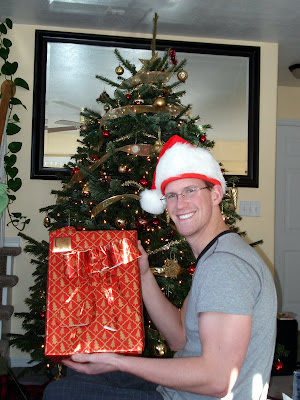 Maybe this is the big gift.... 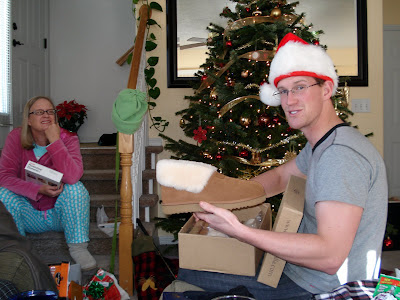 Yeah!!! He got his Uggs after all!!!! I finished reading the Adobe photoshop package now....what did you get again? 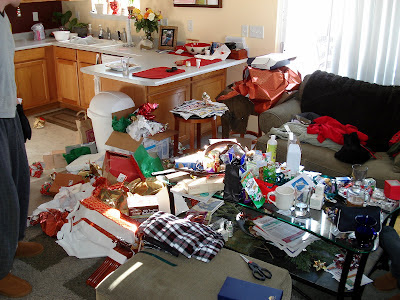 Wow. That was fun. 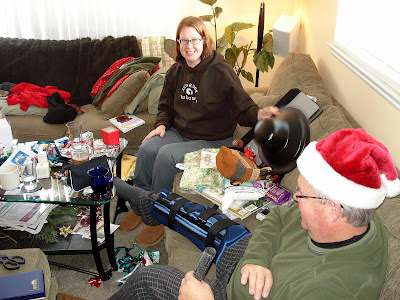 Let's see...we took about an hour off to make eggs and pancakes...looks like three hours of unwrapping. 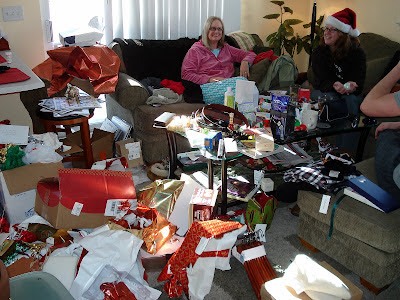 Who is going to clean up all this mess? 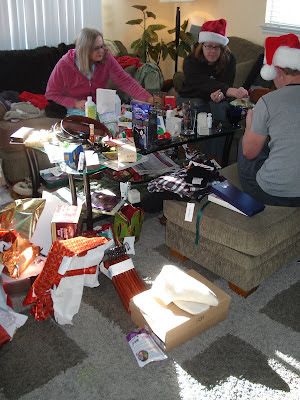 Thanks for everything Mom and Dad D. and S.!
We'll be talking later.
We're heading out to feed the ducks now.
Another post later!
Posted by Thoughts on Life and Millinery. at 1:15 PM

Merry Christmas!!! Looks like you had a good one. Give my sympathies to Bernie and his poor leg. Have fun with Photoshop!

Looks like fun. Can't wait to see what you can whip up on Photoshop.
Me likes the terrorist/bank robber shot of your son. Very becoming.

Oh I'm a bit jealous of your adobe photo shop. That seems like a lot of fun, I would have lost interest too.
It looks like you all had a great time and now I'm off to post our Christmas. I think Meowsie is such a beautiful cat.

Looks as if your family had one pretty nice Christmas together. We were all together, but our "mess" was much smaller than yours! Enjoy your Photoshop and the rest of your visit!