We left the garden to fend for itself while we were gone to Switzerland, knowing we would be needing to replant for summer anyway. Between rain and a sprinkler system on a timer we figured everything would be fine when we returned.

Predictably, a few plants rose up to outshine their former glories, just to let us know that we as gardeners really don't have that much to do with plant success.

These specimens were blooming for us upon our return to the garden: 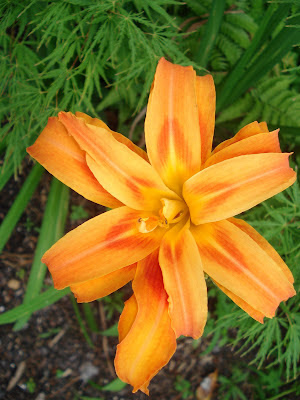 Last January we had pulled out all the day lilies that hadn't bloomed in three years. Missed one..it bloomed!
Go figure.
Guess it knew I would be more impressed by the multiple shades of orange after I came back from Europe. 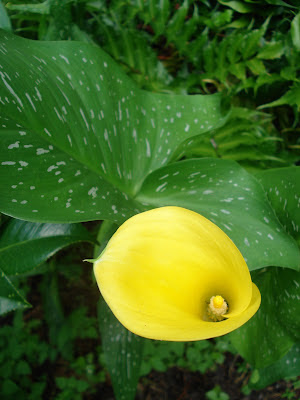 The yellow calla lily bloomed too. 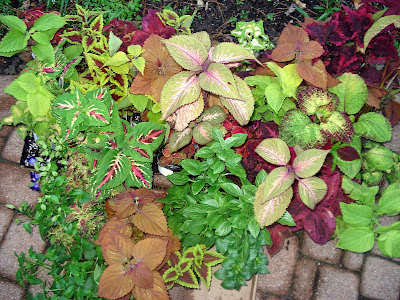 The pansies though were done though; heat and pansies just don't mix. I always look forward to planting coleus for the summer season. Each leaf reminds me of a Persian rug. There are so many varieties! And they do grow very well in our hot humid climate. 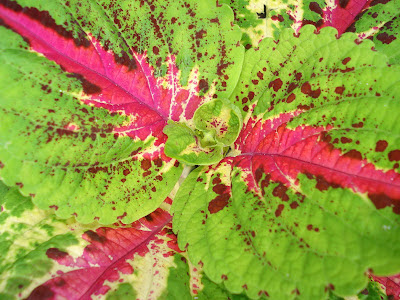 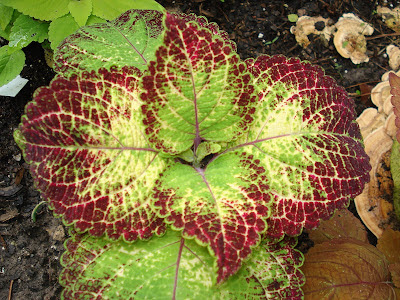 "Coleo de Sol"
Each plant came with a fanciful name. I kept the sticks with their names tucked behind the plants so I can keep track of their names. 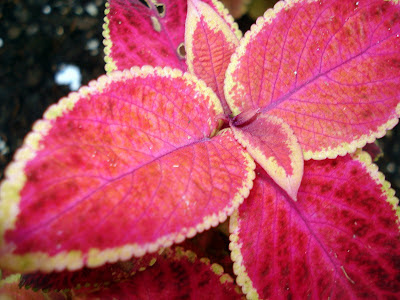 "Glory of Lumemberg"
I actually go hunting for different varieties; and I am warned which are for sun and which are for shade. They go into a bed where they get both, so I just mix them together. 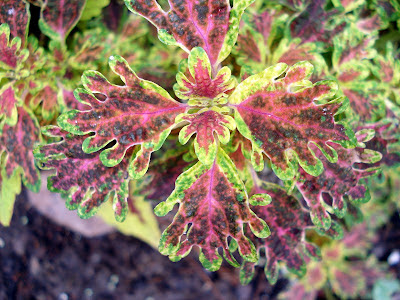 "India Frill"
The best part of coleus is that you can snap off the top, and just push the stem down into the soil, and you get another plant. Just like that. (And yes it is tempting to snap off the tops of varieties I see in public plantings. I resist. Mostly.) 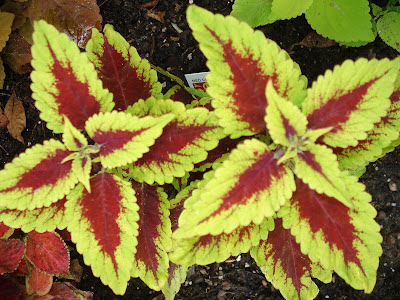 "Red Coat"
Our little green anoles are just as cute as they can be hopping around in the coleus. They sit on the leaves like they are posing on a rug.
Usually they stay bright lime green too, although they can change to brown too.
Replanting the small bed is challenging; the warm rainy weather has produced a boom in the mosquito population. I sprayed myself heavily before I started in spading up the soil and pulling the weeds that had tried to move in. I used a new spray, a powdered form of repellent. The mosquitoes considered it to be like powdered sugar topping on their favorite sweet treat.

Not funny. Back to "Deep Woods Off." Darn, I really hate the oily feeling of bug spray. 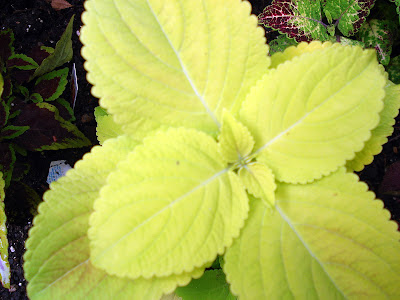 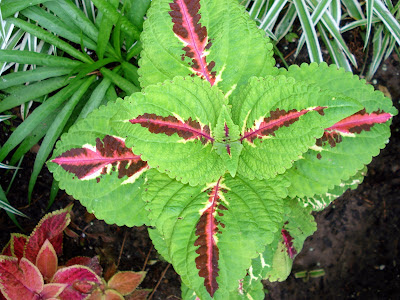 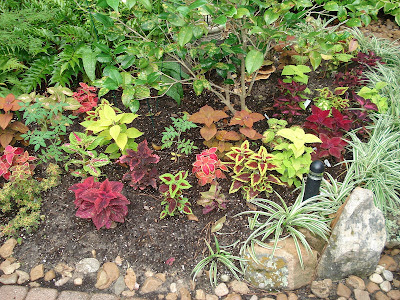 In a couple of weeks the coleus will grow so much that it will be impossible to see the dirt between the plants.
My dad LOVES dirt between his bedding plants, so Dad, enjoy this shot of the garden before it fills in.
Of course Bernie helped me with the digging, and the cats...well, they supervised. Tiggie especially likes to be outside when Bernie is out in the garden.
When it is just me, he has his reservations. 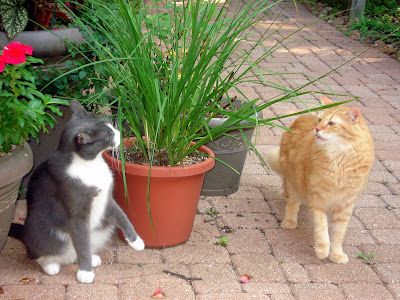 Once the boys are outside, they patrol the potted plants with the intense scrutiny. Bomb sniffing airport dogs would be impressed. We feel much safer from eco-terrorist knowing our boys are on the job.
We are just not sure what would be cheaper: feeding the boys, and providing litter and Uncle Scott services, or using this product around the yard: 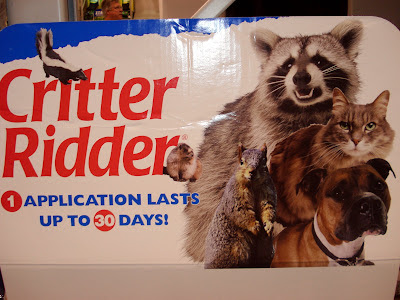 (Wait a minute...is that a picture of a CAT in that advertisement? Hmmm...maybe we should put a copy up where the boys can get a good look. Just to keep them in line, you know?)
No, we wouldn't do that. We love OUR kitties.
(I just wish Tiggie would quit smoking. Tiggie wishes Jeff lived here so he could pet him like that ALL the time!)
Posted by Thoughts on Life and Millinery. at 10:05 AM

I always say my plants grow inspite of me and not because of me!! smile

I enjoyed the tour of your garden...I love coleus too - the great variety and color of leaves intrigues me.

Have you ever tried planting Balm of Gilead for keeping mosquitoes away? I planted it last year potted on my patio and I really enjoyed the plant -- strong smell when touched but not unpleasant. We don't have a big problem with mosquitoes so I don't know how effective it was but that is what it is claimed to be - a natural mosquito repellant. Maybe rubbing the leaves on your skin would work??
I bought it because it was such a scriptural plant!! (smile)(Jer.8:22)

Coleus is such a beautiful plant. We have it in our area as well but I hadn't known it came in that many varieties.

loved . loved . . loved the little videos. I miss having a cat around, but something tells me that a new cat would just create another problem for tobee when he comes to visit.
(I left comments on the video clips)

That Tiggy is quite a character! Isn't that just like cats, you open the door for them and they stand there refusing to exit...I almost fell of my chair laughing! The experience is very familiar to me,dedicated cat person that I am. I do hope all goes well at the vet's.