Wearing of the Green, Orangemen, Peace and Grandmas

Well, the weatherman here says our March will be coming in like a lamb. Mild temperatures, and some rain, and mercifully, some cooling.

If it doesn't cool soon, my pansies are going to be cooked. There is only so much I can do to tweak their environment by tucking ice cubes around their little toes every day.

It IS starting to rain, and the trees outside are swaying in the wind. Around here, the trees have already begun to re-leaf. Spring has sprung in Kingwood, regardless of the calendar's notations.

I'm up for the whole March thing. Today is my college chum/MOH's birthday. (Hi Jennifer! How's April this morning? Did you go for a frosty ride yet?) April is her horse, and Jennifer raised horses while I raised children. I'm not sure which adventure was cheaper, but at least her little girl April is there with her on her birthday.

I've changed my side bar to show green hats, so if you need inspirations for avoiding a pinch later on this month, go ahead and take a peek. Why not wear a green hat this year? You're likely to get a kiss for your efforts, or maybe a fun little pinch from your someone special. (wink!)

Spring always makes me feel giddy and alive. But I realize I am called to be serious and sober minded in all things, as part of my Christian faith, so let me begin by pointing out that for years there has been trouble in Ireland between those of the Catholic faith, called "Green" and those of the Protestant faith, otherwise known as "Orangemen."

Thankfully, much progress has been made recently to create a state of peace in that troubled land. For that, I am truly thankful.

Now around here, it's another story.

My Mom recently sent, like all good grandmothers do, something in the mail for her "grands" amusement. In this case, it was to her grandcats, Tiggie and Hart. Neatly folded up in an envelope was dried catnip leaves from her garden. Isn't that sweet?

Don't all of us Mothers know what happens when children receive new toys?

Of course you do.

They fight over them.

I gave our Orangeman Tiggie three leaves configured as clover to celebrate the new month. 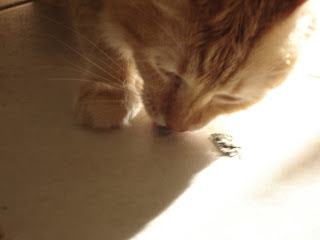 At first it went pretty well. 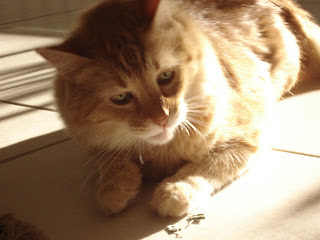 He thought about it. 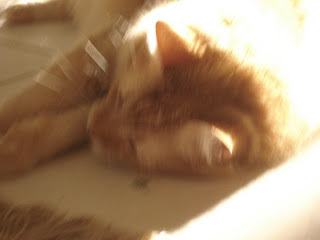 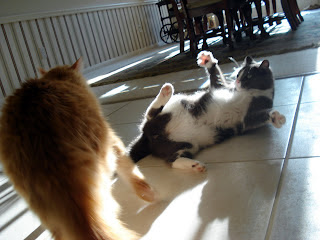 And then, oh dear, a fight broke out between the Orange Cat and the (Greeneyed) Grey Cat.

Tiggie said Hart was trying to steal his catnip.

Hart said he didn't touch Tiggie's catnip, he was just looking at it.

I don't think the UN should get involved.

But remember, as much as it is up to you, try to live in peace.

And don't mess with cats who are nipping their catnip!
Posted by Thoughts on Life and Millinery. at 7:54 AM

Fabulous green post. Those hats that you have made are amazing. I'm just in awe of your craft. you must have hat boxes that actually hold hats. I honestly thought they were simply for hold bits of this and that, and for hiding disaray from visitors view. I'd love to see a picture of your hat shelves, they must be something to see. Ah the poor kitties. My mom learned that when one grandchild had a birthday they both recieved a packet. Perhaps your dear mom will have to send two envelopes next time. How sweet she is.

Love that green! Spring, youth, the smell of fresh evergreen buds, of leaves bursting out of their winter case, or grass starting to look lively again, ... love the green! Your site is an inspiration for those of us still awaiting spring! Thanks

believe it or not, as I was laying in the spa chair today, I was wondering about that family tree of yours. Have you posted about the connection with your famous sidebar people? Please do tell.

So fun! Ya I love sprinkling catnip all over our cat's three scratching posts (there's one for each of them). I will also rub some all over their toys in their toy box and put some in their self-groomer so they KNOW where their areas are.

That sage green is my Mom's favourite color.