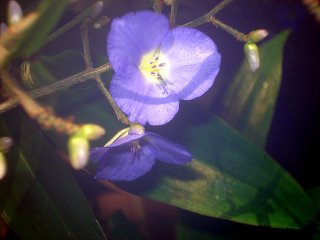 This morning in the garden everything is green, and heavy looking, like the weight of the morning dew point is quilting the gardenscape. My camera captures the humid density, making my photographs appear as though they were taken in a morning fog.

It isn't a cool fog, but rather the kind of fog that happens in the bathroom after a hot shower on a hot day.

A very slight breeze meandered through the garden at one point, and I imagined what it would have felt like if it had carried an iota of autumnal crisp.

The Carolina chickadees sounded their "chickadee-dee-dees"vaguely, and another bird chuckled softly, sounding as does a reader chuckling quietly at a passage not shared by any one else.

School began yesterday here in the Houston area. How there can be any enthusiasm for learning right now eludes me. The college is about to go between semesters, with school beginning again at the end of August. It will still be hot then, and students will dress as though they were attending a summer camp, in shorts and tank tops, and sandals.

Dates on calendars of man's creation do not trump the seasons as proscribed by the tilting of the earth's axis, as promised at the time of Creation. Summer will not be rushed. Not here in Houston, not even for the chance to have an extra two weeks of football practice before the games of fall begin.

Right now the garden has few jewels to offer. This tropical flower, related to the spiderwarts, valiantly blooms in a pot on the patio. Just looking at it is a cooling experience, it has a pale yellow center, creating that classic blue/yellow/white fresh combination.

It's going to be a good day to stay inside. The windows are all fogged, as the air condition created spaces contacts the summer space outside. I plan to sew on a dress I have been sewing on with no particular time frame for completion. The house is cleaned and laundry is done, errands up to date. Isn't that how August is supposed to be, a time to dawdle a bit? Like being "snowed in" in winter, it is possible in Houston to be "humidity in" in summer.

Posted by Thoughts on Life and Millinery. at 8:15 AM