Freezing rain has kept me housebound the past two days.
This means I have had a few extra moments to ponder and mull, research and react, and enjoy a bit of millinery too.
First up:
After doing a little research, I am excited that I will be wearing this hat again!
I have a matching emerald green long shawl collar wool dress coat; I haven't worn them in ages because somehow emerald green just seemed, oh, I don't know, just kinda not right. 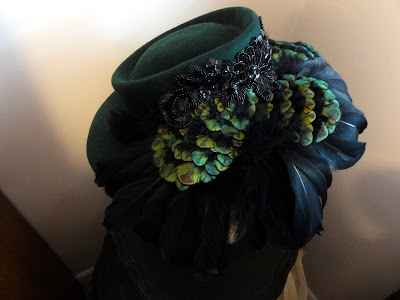 After some spur of the moment research, my thinking about emerald green has changed.
Are you up to speed with Pantone's announcement about the color for 2013?
I wasn't until two days ago.
I did know that two years ago Pantone named a color called Honeysuckle for the color of the year, which was a coral pink punch color.
Last year it was an aqua shade...
I really didn't expect them to name EMERALD to be the color for 2013.
How could I have missed guessing that Emerald would be making a comeback in our color choices?
Now if you were old enough to buy furniture back sometime around in 1985-1995 I am almost willing to bet that you probably indulged in a sofa with some emerald or hunter green colors, probably mixed with a deep wine red or burgundy, or perhaps a deep royal blue.
There's a reason why I can make this guess.
As it turns out, color choices rotate in ten year cycles, usually beginning the shift about mid decade.
The cycles go from:
Subdued/Pastel
to
Saturated/jewel tones
to
Earth tones/Neutrals.
From 2003 to 2013 we have been trending towards neutrals and earth tones.
Think granite counter tops, coffee brown woods, or birch, or steel greys, with accents of nature tones of aqua or natural greens, or wheat golds.
I posted about the history of color cycles before HERE,
The pastel pink, yellow and baby blues of the 1950-60's
The saturated pop "hot" lime/pink/orange colors of the 1960-70s,
The earthy harvest gold/avocado/copper/macrame earth tones of the 1970-80s,
The pastel dusty blues and mauves pastels of the 1980-90s,
The jeweled hunter/burgundy/navys of the 1990s-2000,
The neutral earth tones of mossy/cream/coffee black earth tones of 2000-2010
Then we drifted quickly though a pastel aqua/greys/light blues the past three years.
Now, in a speeded up cycle, we are just starting to see the first hints of back to jewel tones.
Emerald green will now be showing up everywhere.
Paint a wall emerald green?
Carry an emerald green purse?
Wear an emerald green blouse?
Buy an emerald green accent pillow?
Now is the time!
At first I was a bit disappointed that the color that will be "out there" was emerald green since it was a been there-done that color for me.
But after looking at photo examples of emerald green in home decoration and wardrobe accessories, I have emotionally bought in.
Again. 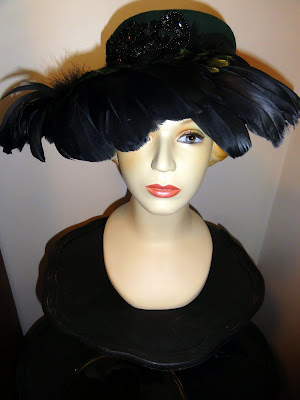 It is quite a daring hat...
(And I should have used a diffuser on the flash to avoid that heavy back shadow...a piece of tissue wetted and stuck to the flash usually will do the trick...) 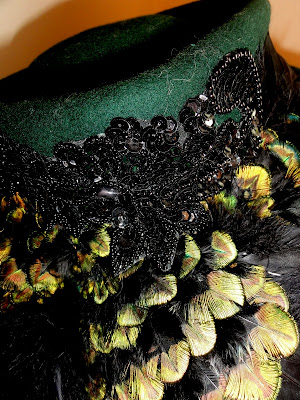 Maybe I will wait a bit until the emerald thing really gets going before re-debuting it in public? 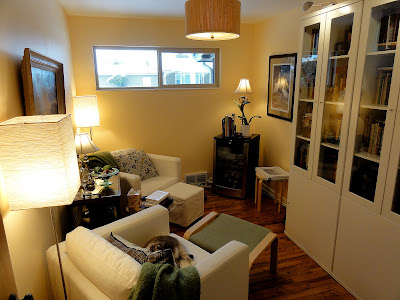 Our library has definitely gone pastel... 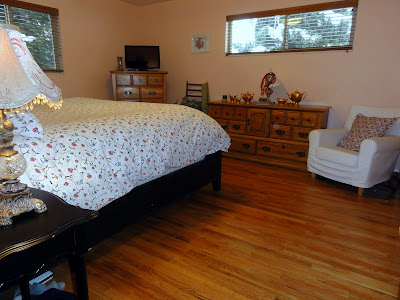 As has our master bedroom.
The trouble is...I don't like the cameo pink color.
I wasn't sure of it when I first painted it four years ago when I was trying to fit into the the Mid Century modern vibe. 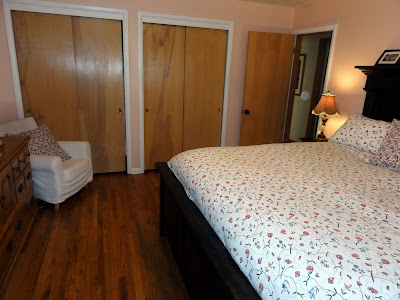 The past three years have seen a lot of paint chips taped to the walls. 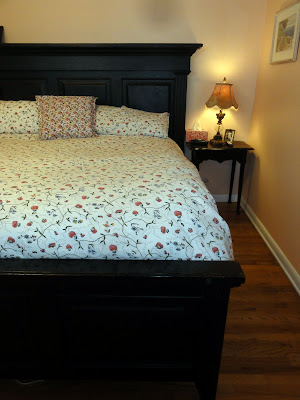 After flirting with painting the walls a deep brown, or a celery green I have finally decided what color I am going to go with:
SW Dover White.
A basic creamy white.
How...uh...not daring.
Not jewel toned.
(Although I do think one friend's nearly emerald green guest room with periwinkle accents is awesome...hi Ellen!)
Big paint project coming up soon. 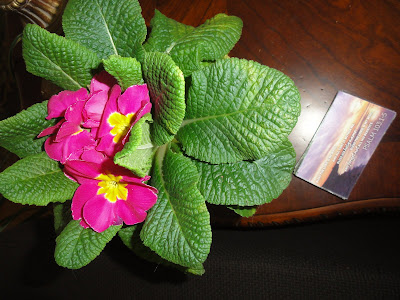 A passing note:  Are primroses showing up in your supermarkets now?
Ours all have potted primroses in all sorts of colors, two for $5.
I am stocking up...they are such a cheery little inside plant.
After the blooms fade I stick them outside and later plant them in the garden where they seem to come back and bloom nearly year around.
Such a deal! 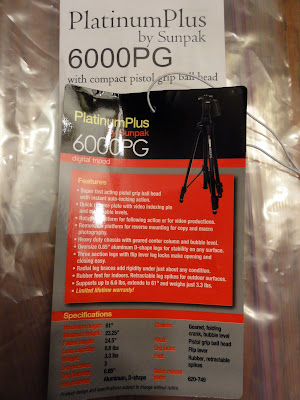 Last discussion point:
How often do you read booklets or instruction guides that come with things?
My tripod came with just a hang tag with a few specifications listed.
I was hoping for a guide book of some sort but no, all there was was the hang tag.
Yesterday, being house bound, I took a moment to read what little the hang tag had to say.

This line stopped me dead in my tracks:
The tripod had a Removable platform for reverse mounting for copy and micro photography.
Huh???
No additional information was included.
I went on line to the Sunpack website; no additional information was there about how to reverse a  mounting.
Eventually I saw a picture of a tripod set up in a reverse platform mount; it looked something like this: Whoa!
Game changer!!!
I consulted with the ever patient engineering minded Mr. B. and he soon configured my new tripod in a reverse mount position. 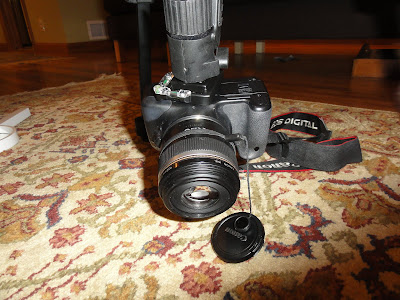 I could get within an inch or less of the ground!
(or in this case, our living room carpeting...) 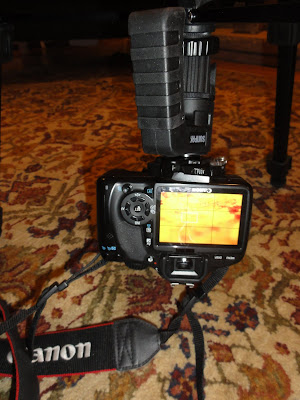 The camera was now upside down.
The display screen was right side up though.
I got a mirror to slide under the camera to help me see the dials for the various camera settings.
Moments later I was taking macro shots on manual, with longer time exposures that require tripod steadiness.
I am so glad for once I actually read the materials that came with a purchase!
My Christmas tree stand McGyver project will still be used for fast shooting.
But I am sure that this tripod function will get its use too for macro work with flowers and ground items come later in this year.
Long post.
Hope you found something here that made it worthwhile to read!
Posted by Thoughts on Life and Millinery. at 10:24 AM

OK you definitely have the gift of research! One of my weaknesses. I'm glad to hear you are housebound because of weather and not because of illness!! I'll be emailing you with my latest greatest news...or not so great.

Thank you for identifying the age of my living room set (as if I had forgotten)! :D

That hat is scrumptious. I think you should be a trendsetter and wear it when you next feel like it.

Oh my. Look at that whole reverse tripod set-up thingy.

I confess... yes, I do usually read the manuals, etc. It's a waste of time in many cases, but sometimes there's a valuable nugget or two in there. Awesome discovery about the tripod!

Fascinating about color trending!!! must try to keep that in mind......I love your emerald hat!!!

Your hats are beautiful, and thank you for the link to learning more about the year's color choices. I am always interested in learning the history of fashion.

I agree with Ellen, you are our research queen. I love how you just keep thinking around something, sortin git out and then bringing it to us.
I just bought some purple accent cushions for my living room couch. They are jewel tone. I decided this year to highlight my china and am finding many purple accessories for the home.
We are going to repaint as well...am leaning towards softer spring colors since we have so many grey days here. We went to see a color consultant and she was a great help.
Love your tripod find! woo hoo.

That hat - absolutely beautiful. I hope you'll wear it soon!
I, too, read about the comeback of Emerald green and have decided that a scarf or a sweater might be in order. It's not a colour I'd choose for the house though.
Primroses have been in the shops for some time now, and blooming in my beds since November. Up here, where it's milder than where you are, they are 99 cents each, and will soon be 79 cents, if we go by previous years.
Finally (this is a loooong comment!) I am in awe of your ability with your new camera.

That is very interesting about the color rotation. I know what you mean about the "been there, done that"... but I'm glad the pastels kind of got skipped this time around. It's easier to add jeweled accents to the neutrals than pastels.

Wow! I'm aware of the cycles but never heard them so well articulated! Emerald green...huh. I just can't go there anymore. Except for Christmas. Maybe. I've wearied of painting so its all crisp white now. White is always lovely. What about cycles for upholstery and fabric? Are geometric patterns on their way out? Will we be seeing floral sofas again soon? (Not that I want too...all of my furnishings are solid colors now; but you've piqued my curiosity...)

LOL! My 1997 living room couch was ivory, emerald green and burgandy! We sold it before we moved.

I like that tripod micro set up--I wonder if my tripod will do the same? I'll have to check!