Tricks, Tips and a McGyver for photographers

A friend shares tips and tricks that makes one's life easier or better, right?
I am no expert on photography, but I am happy to share the few dibs and dabs that I have learned along the way with my bloggy friends...so here goes my tips and tricks and McGyver post! 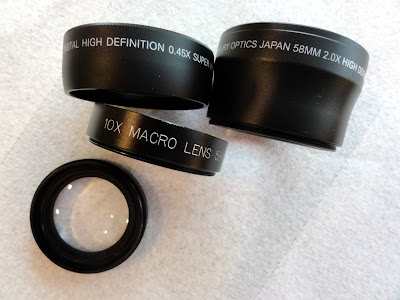 My camera came with a lens that would only do so much in terms of close up work.
Macro lens cost a lot more than I was game to pony up at first.
Ditto for wide angle lens or extra long focus lens.
But...I have Yankee blood in me.
Where there is a will, I find there is almost always a way, and a cheap one at that.
For me the way was purchasing screw on magnifying lens. 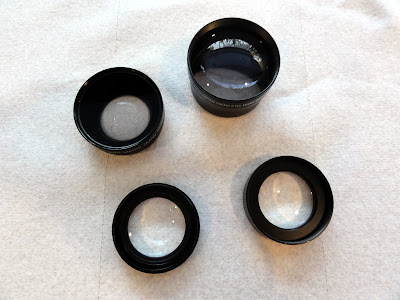 I got them on ebay but most camera stores carry these things.
The cost for each lens is somewhere between $10 to $40 or there about.
Are they a perfect solution?
Certainly not professional grade.
But...
They are for putzing around and learning a bit and actually getting some fine micro macro shots of flowers and snowflakes and such.
The outer edges of the photo tends to be a bit wonky, but one always crops down to get a good macro shot anyway so who cares?
And sometimes the wonky add to the photo's artistic composition!
I also leave these lens outdoors at night so they are good and cold and at the ready for any wayward snowflake that happens during the night.  I get up in the morning and check to see what flakes might have shown up. 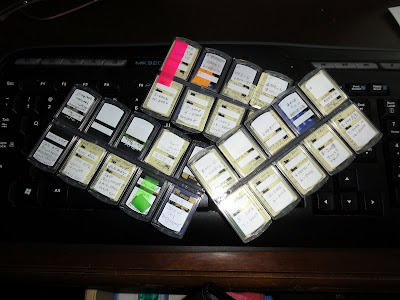 My second tip:
How I store my camera chips.
I never erase my chips except for clearly blurry shots.
Chips are so reasonably priced now; I can get a thousand shots on a 16 gig chip that costs under $20.
I found these handy little storage units at my camera store.
I write a beginning and ending date on each chip, plus a word or two about special subjects like Swiss trip.
Then I write a more detailed list on a small sticky note which I put inside the case with the chip.
Then I write the same details on the outside of the case.
The triplicate documentation helps make sure the right chip is in the right case. 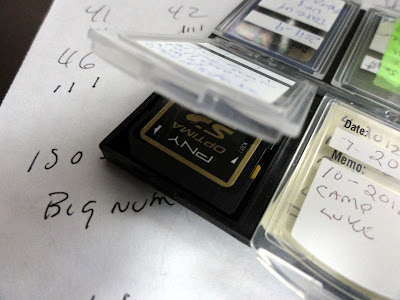 A close-up of how it works.
Right now I have four cases, each case holds ten chips.
I have them slipped into a semi water proof zippered case where they can be easily grabbed if I ever need to evacuate quickly.
I do put my edited pictures on Picasa web albums too.
And I back up our computer and at one time had a secondary external back up drive for my photos which two years later did not wish to communicate with our new computer.
Grrrr...
That misfortune cinched it for me.
I keep all my chips, with my photos in an unedited state, after the chips are full. 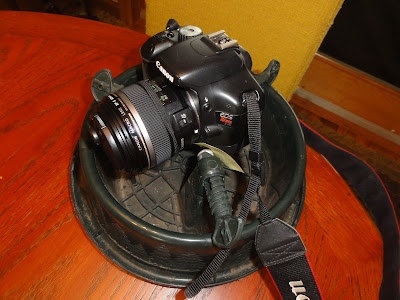 Now this is my McGyver project.
Two days ago I was photographing the surface hoar out on the snowpiles out front, down on my knees and trying to use manual settings.
It was impossible.
I couldn't hold the camera steady that close to the ground unless I was shooting straight into the ground.
This irked me.
Bernie had gifted me with a tripod with legs that would spread flat on the ground.
That should have solved the problem except for two things:
The working around the spread legs is tricky.
The leg of the tripod snapped off the other day.
(I bought a new tripod that I like much better than the old one but it doesn't go flat.)
Two days ago was when I realized I needed something to address the on the ground shooting issues.
One day ago THIS popped up in a photo tip website; called a Ground Pod, it was a dish shaped items with a tripod head mounted in the middle.
Seemed like the perfect solution, except the price and shipping time!
Then there was an article which suggested something similar could be made using a frying pan with the handle removed, and a drill.
Bernie said he could make the frying pan version...when that would happen wasn't a detail that was easily pinned down.
I was antsy...I wanted something that would work right now, as in this very instant!
So I mulled and mulled my dilemma.
I wanted to be able to get low and steady ASAP.
Mull...mull....mull... 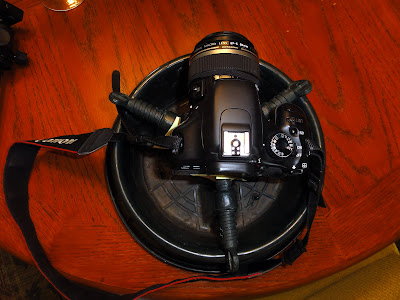 Then it hit me:
Our Christmas tree stand just might work!
Sure enough, it was just the ticket for now.
I used sticky notes on the end of the screws to avoiding scratching my camera; I will add felt stick on pads as soon as I can.
The stand is pretty light weight, the screws are big enough to be easy to move while wearing mittens and I think I can add styrofoam blocks or bean bags in the middle if I want to raise the camera up higher.
Totally works for now.
It would/will be great to have a frying pan version using the broken tripod's head so I could have more flexibility but for now, I can just spin the entire stand if I need to.
Low tech works for me!
So...those are my tips and tricks.
How about you?
Any thing you might be willing to share?
Posted by Thoughts on Life and Millinery. at 11:06 AM

Oh, I have so much to learn! Thanks for your tips! Have you ever tried or thought of one of those "Gorilla" tripods? It seems like they might be quite useful.

Wow. Very interesting tips. I have often wanted a very low tripod...hmmm. I never save my photos. They aren't worth anything to anyone, but me. Just dealing with the family photos has taught me not to saddle my kids and grands with it. You, though, should be publishing or showing your work!

What a fantastic idea to keep your camera memory cards as your unedited pictures! Burning them onto CD's is such a hastle and don't hold very many pictures at best! I am totally going to use this version of storage. Hope memory cards still work in the future??!! Who knows!

I figure that I will always be able to stick a card into my camera and see the picures again. Now if we are in such a sad state of affairs that recharging power is no longer a possibility it would be a bummer but if that was the case I think I would have more pressing concerns...
I also think that significant family photos should be printed once in color and once in black and white in a small size. A birth, childhood, marriage, mid life and old age photo collage for each family member would be worth having in print.

I have used the gorilla tripods with my point and shoot cameras; I have been too nervous to try them with my DSLR camera. They do work great for unusual location shots!

these are some great tips. I was just sorting through my memory cards today thinking there could be a better way to keep track of them! Thank you!

You are most innovative! I store my photos only on my computer...and an external hard drive...and many 'keepers' are in Shutterfly albums. But I definitely like your storage system.

If I ever get around to 'playing with lenses' I'll come back here for a refresher!

I dont' store any photos on cards...like Judy on my computer and external hard drive ...and of course, there are many on my picasa albums now.
You certainly have learned a ton this last year about macro shooting. It makes me want to sit down and start studying what my camera can do.

You are very organized, and very creative too. If I ever get serious about photography I will use some of your great tips.

All my photos are on the computer, Picasa, and a hard drive if/when I remember to back them up. I just use the same memory card over and over.

You are one smart cookie!! I LOVE when you share photo tips. I bought the magnifying lens on your advice. I store most of my photos on my laptop with an external hard drive for backup. (which I need to do very soon) I never thought of using chips.

I have a nifty 50 lens question. I can't get good macros with it - it won't focus close up. That surprises me. I thought it was supposed to be good for that? Am I doing something wrong?

Kathie... I was surprised too. It does great work for mid and long range landscapes and such but I couldn't get a decent macro with it either.
I talked to my camera store about it; turns out the lens quality is just mid range and that is why it fuzzes out when one crops in super tight. :-/
I had better macro luck with my kit lens alone or with a magnifier. The 50 doesn't have threading for screwing on a magnifier either.
I still need to "mess" with the telephoto lens for macro more too.

Hi! I’m new follower of your blog and would like to invite you to join me at my weekly Clever Chicks Blog Hop: http://www.the-chicken-chick.com/2013/01/clever-chicks-blog-hop-19-hog-wash_27.html

I hope you can make it!