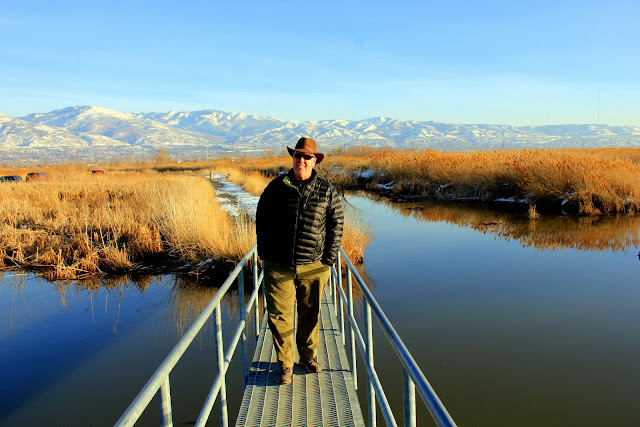 This time of year lots of articles are in the paper about Farmington Bay.
Or what is more properly called "Farmington Bay Wildfowl Preserve".
I've been wanted to go see Farmington Bay ever since we moved here, but the time has never quite worked out. 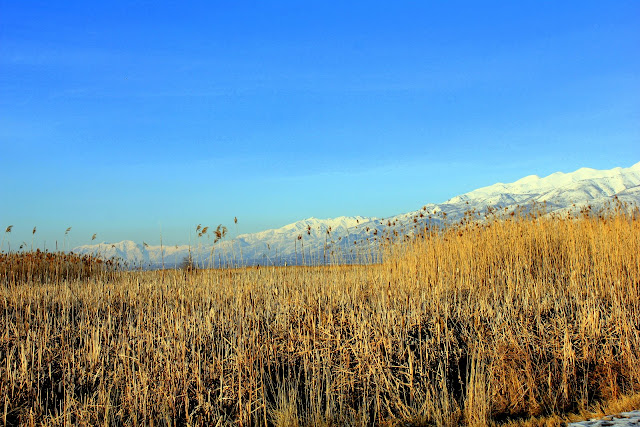 I checked the address...and had Bernie drive some thirty miles north above the Bay.  Turns out I had looked up the address for the Farmington Bay Wild Fowl Preserve's business office.

Oh well.  It was a pretty drive.

Using a trusty GPS link, we wound back down the highway and onto a dirt road and on to the shores of Farmington Bay. 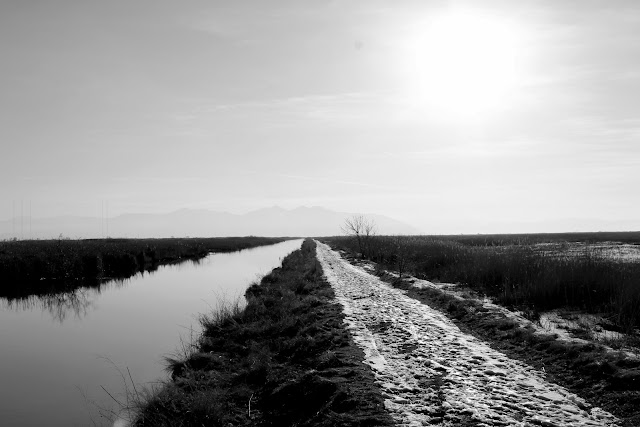 There was even a sign saying this was Farmington Bay in the small parking lot that was filled with duck hunter's trucks.

We booted up into our hiking boots and started to hike in.

It just didn't look right though.

We hiked a few hundred yards down this icy-snow covered path before we decided something just wasn't quite right.

After we got back into the parking lot, I spotted a truck with a duck hunter chatting away on his phone inside.  I went up to him and asked him if this was were the eagle nests were supposed to be.

He had news for us: This was the SOUTH entrance to Farmington Bay.

We needed to go to the NORTH entrance.

Directions followed that included such landmarks as a Burger King restaurant, a paved over rail road track and a yard filled with school buses.

With my GPS still instructing us to make a U turn, Bernie drove us back up north. 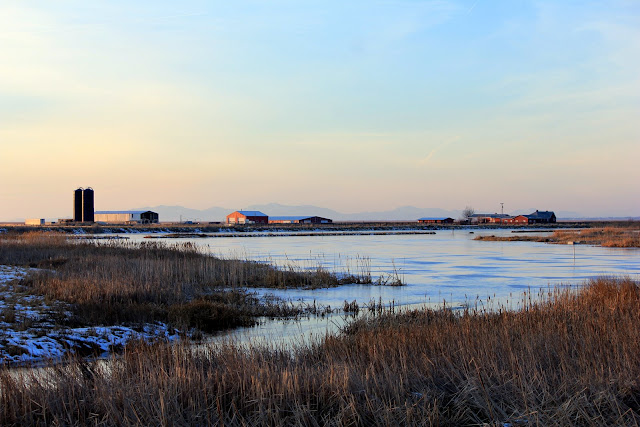 He drove through housing developments and farmland before finally finding an address that was close to what another website had said was Farmington Bay Wild Fowl Preserve.

There was a parking lot there too, and a sign saying Farmington Bay.

Maybe this was it?

Well, it sure was pretty.  But dead trees with eagle's nests?
I didn't see any. 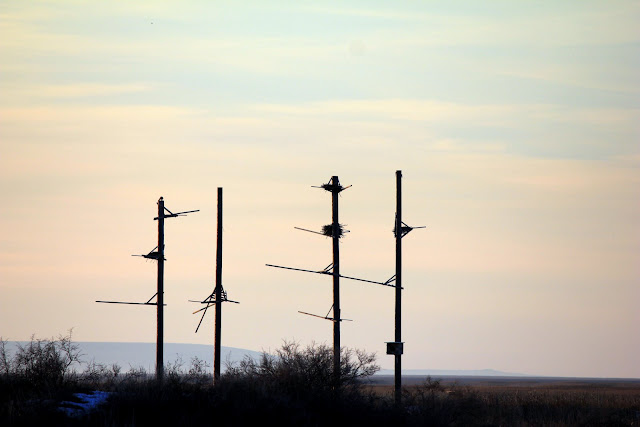 There was these structures with nests...but clearly these are not dead trees like I had seen in the Farmington Bay Wildfowl Preserve articles. 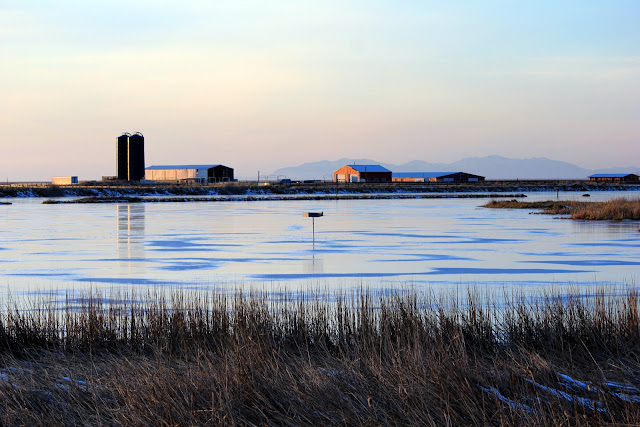 The sun was setting and the temperature was plunging down below freezing.

We both were enthralled with the area's beauty...even if my jeans were not suitable attire for the temperature at this point in the day. 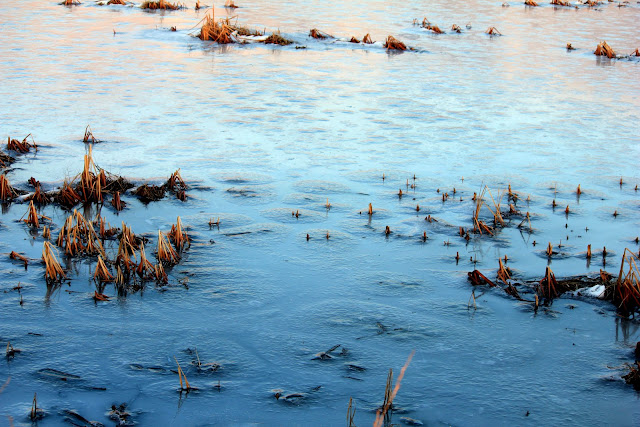 Bernie pointed out how the bay's water had frozen in bubble forms around the aquatic plants. 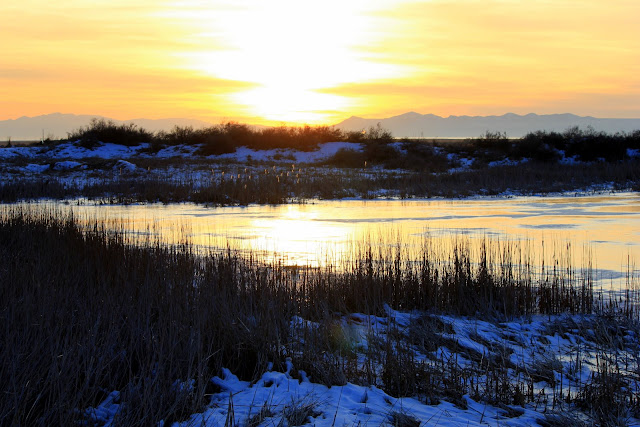 The setting sun set the world around us ablaze with golden light. 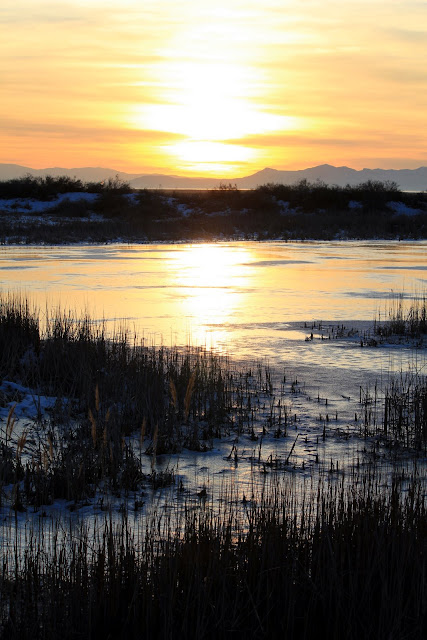 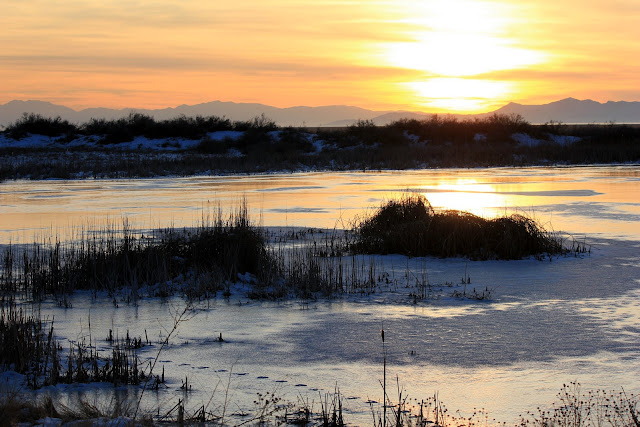 Animals had tracked through the water while it was semi frozen; now the tracks were frozen hard. 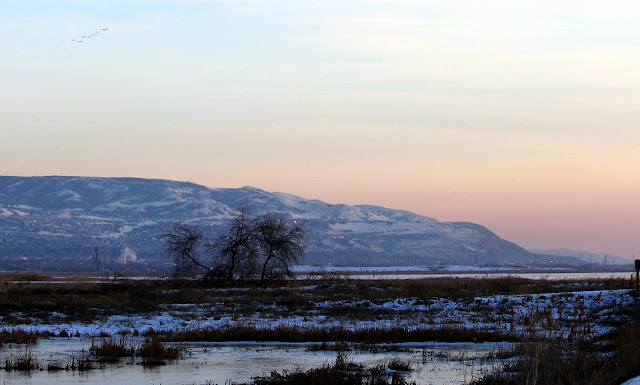 Overhead wild fowl honked as they few away from us. 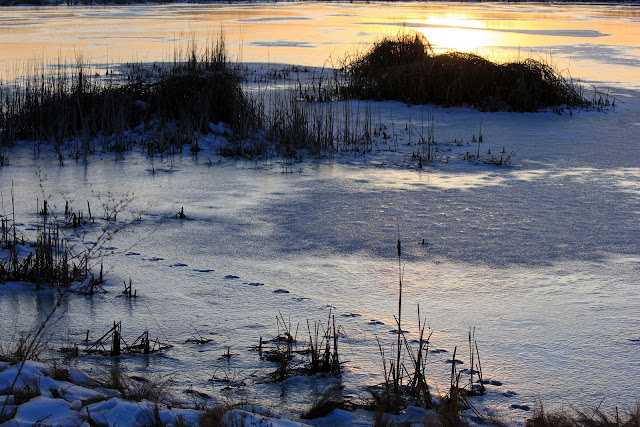 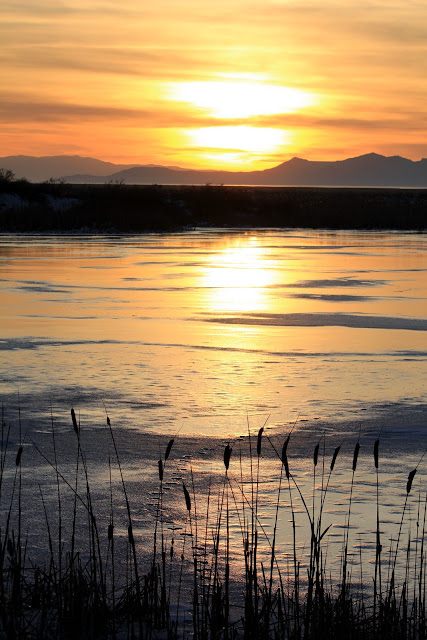 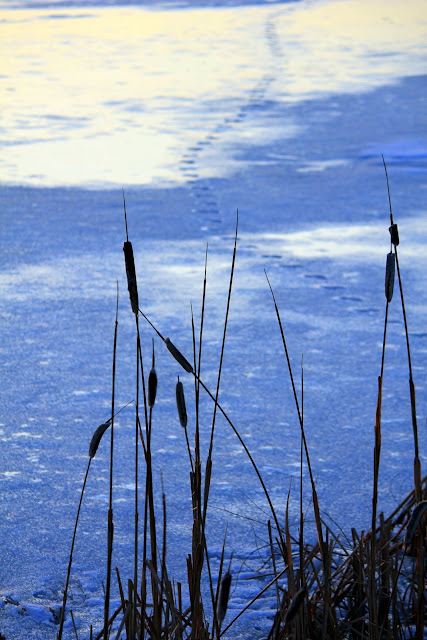 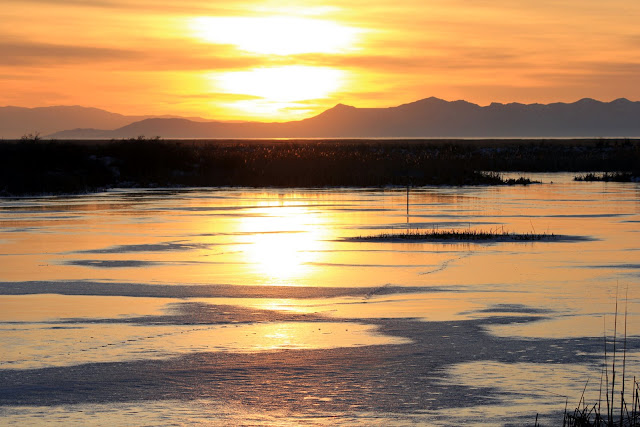 Every moment the play of light on the frozen landscape intensified. 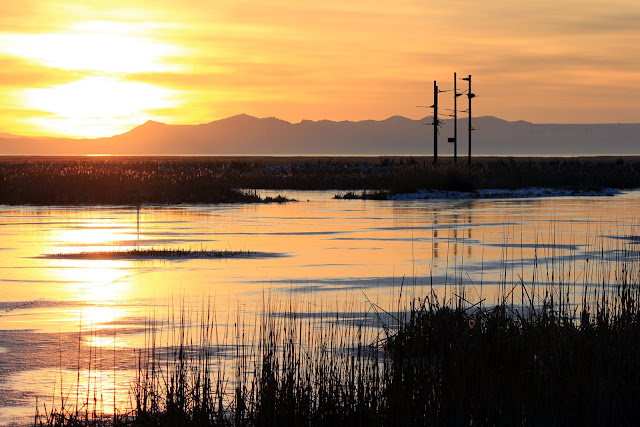 In the distance we could hear shot guns being fired. Bernie thought it was the last day of duck hunting season and perhaps that was why the eagles were not yet settled in on their strange nesting structure. 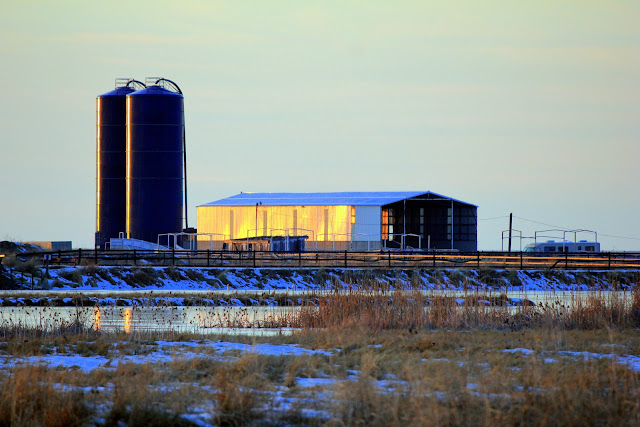 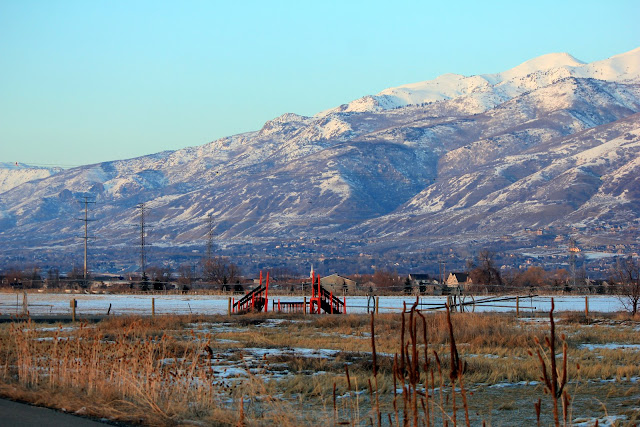 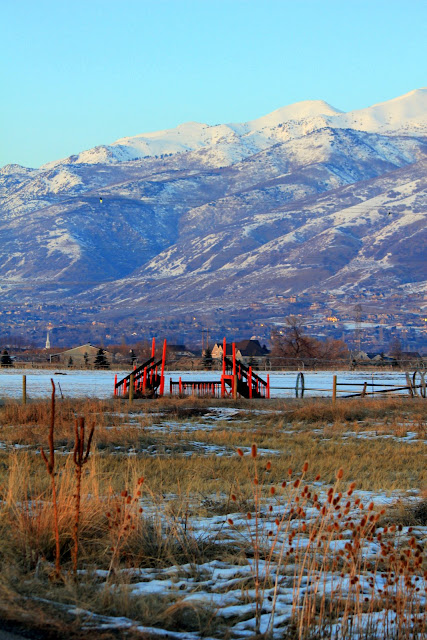 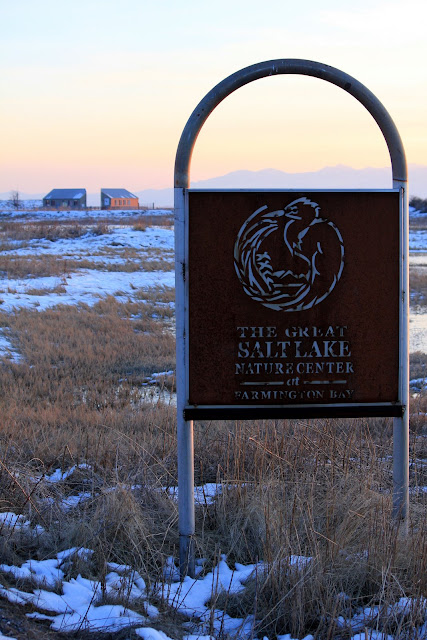 So...apparently we were at the Great Salt Lake Nature Center of Farmington Bay.

Which apparently is NOT the Farmington Bay Wildfowl Preservation Center.

(We agreed that this would be a really amazing place to visit in the spring or fall though). 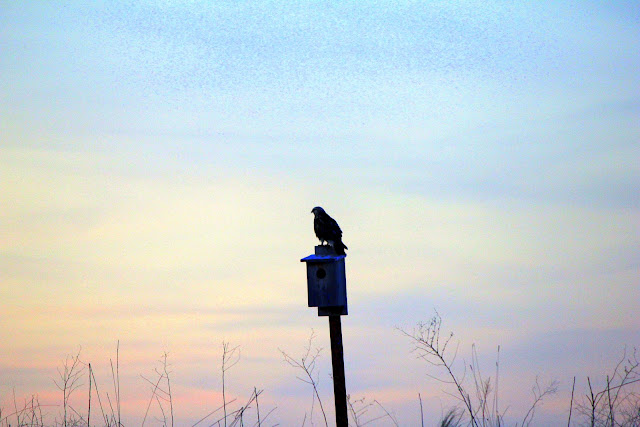 And wouldn't you know it...at last!  A sign, not even a mile up the road, saying Farmington Bay Wildfowl Preservation.

We drove in...and saw the only bird that we saw all day.

Some kind of hawk.  And in the distance we could see dead trees too.

It was almost dark; we decided that exploring FBWP could wait for another day. 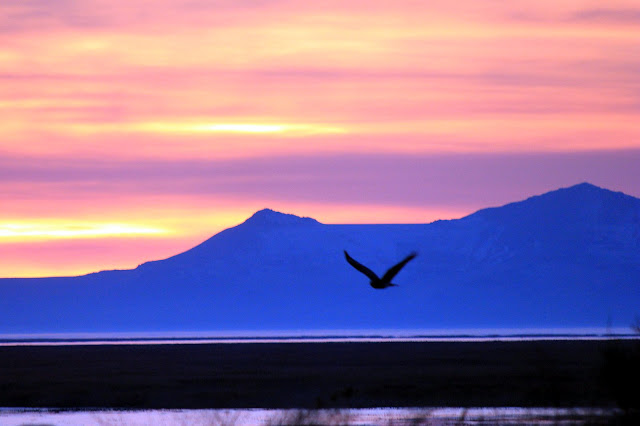 And just like that...the bird in the photo above took flight against the fading sky.
We couldn't have asked for a more perfect ending our day!

Posted by Thoughts on Life and Millinery. at 10:19 PM

Ah...those are just gorgeous photos. I am amazed that you provide not just one but an entire album and all of them amazing.

Farmington Bay....quite worth a drive.

Jill, you could sell these photos. My favorite of all is the first of Bernie. My second favorite are the tracks leading off in the snow with the cattails. My third favorite is the final one...amazing! They are all frame worthy. Hope that you are able to return soon to see the dead trees and the eagles and all.

Your photos are gorgeous! What a WILD goose chase, huh? It's fun to explore like that. We've learned not to completely rely on our GPS...she's only right about 90% of the time!

Those strange-looking structures don't look suitable (or big enough) for eagles. I'll bet those are osprey nests. They like to be near water and tend to build "smaller" [than eagles' nests] on similar structures. I couldn't tell from the picture, but that hawk may have been an osprey.

I love all that gold! You outdid yourself with these photos.

Love the beautiful light in your photos and your perseverance in trying to find the spot you set out to find! I, too, like that first photo of Bernie!

Such lovely vistas Jill! Wish I could do a photo shoot with you someday.