January is so boring...unless you have cats.

Is it STILL January?
Is anyone else out there as bored as I am with this month?
I just can't seem to find much to interest me.
I  find myself watching with envy when the cats get a good game of turbo chase ball going on this thing: 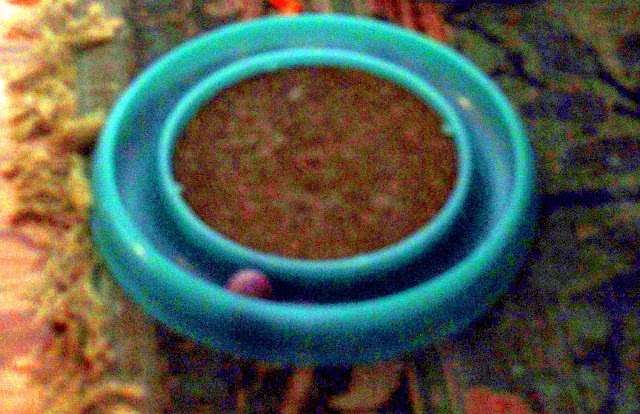 Funky picture I know, but for all you non-cat owners, this is what is known as a turbo track.
The ball is "stuck" inside the track,  but it can be made to race around the track with the slightest pat of a kitty paw.
In the middle of the night, one can lay awake listening to the sound of the ball rrr-rrr-rrr'ing followed by a thwack and an increased rrrrrr pitch.
I figured if I was bored with January, then the cats must be kind of bored too. 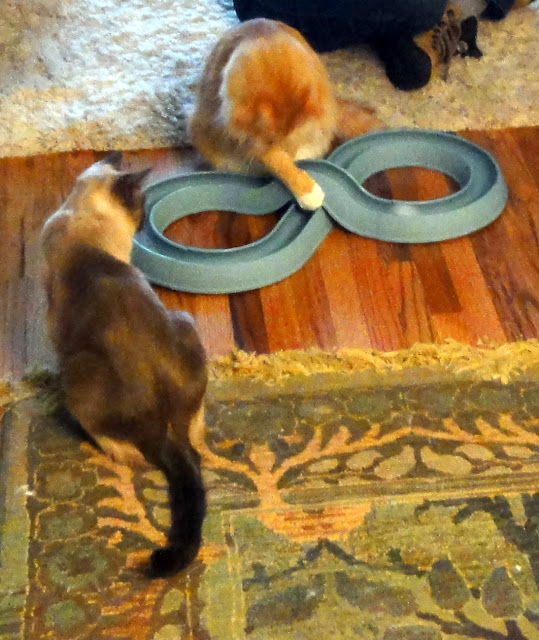 Saturday they got their belated Christmas gift. 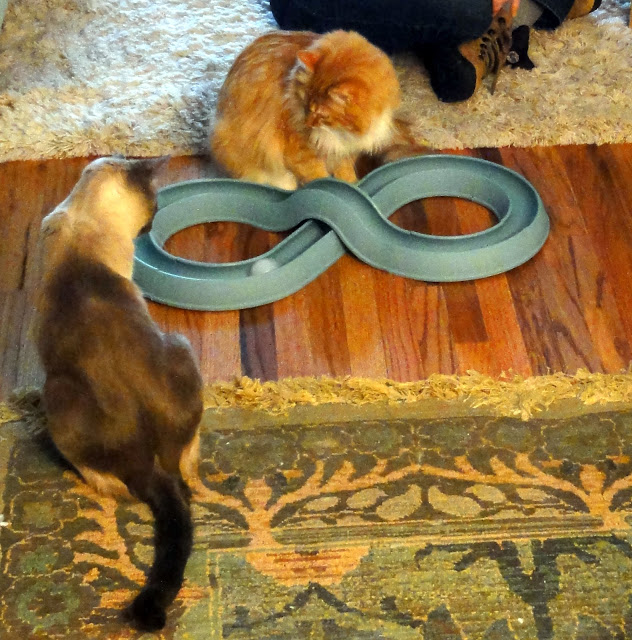 I had barely snapped the pieces together before the ball was set into motion. 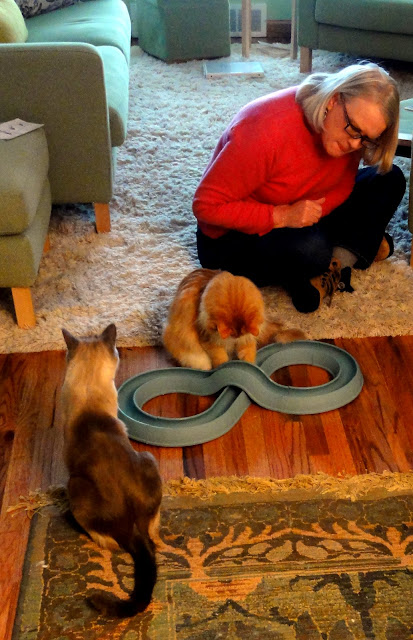 Now the three of us sit on the floor and play turbo chase together. 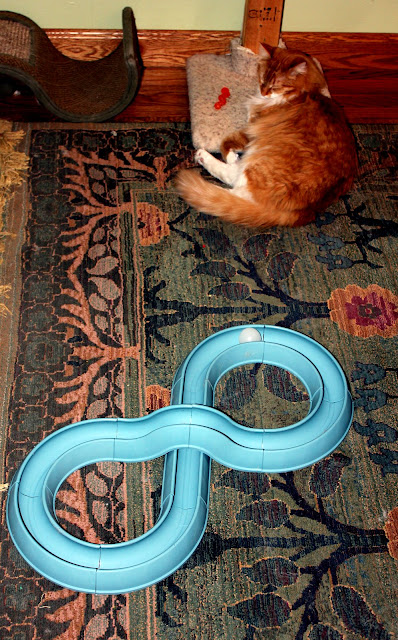 After a few hours, Tate was finally tuckered out and took a nap.
Actually we all took a nap.
January is a month that inspires nap taking. 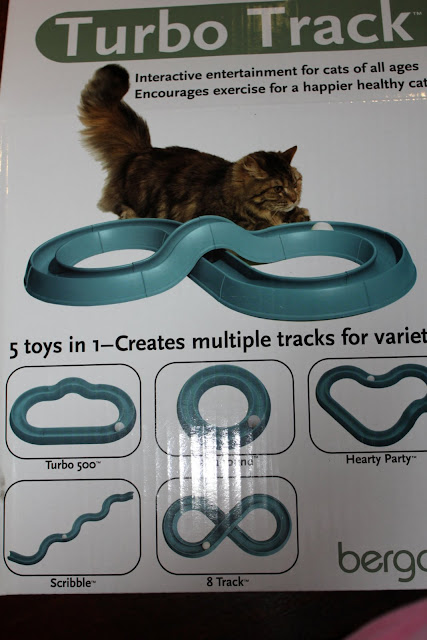 We have only tried the 8 track and the Hearty Party configuration so far. 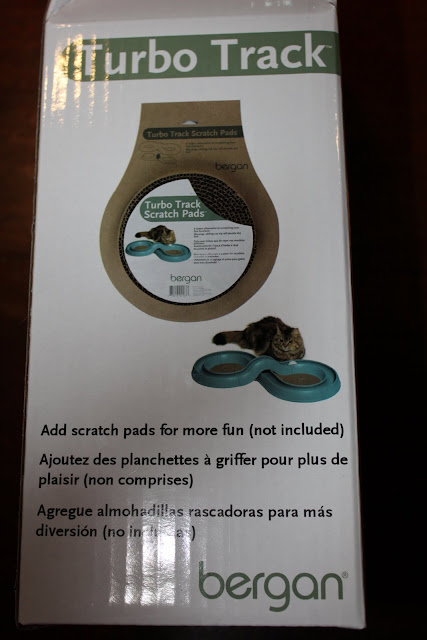 (The first picture is what the game looks like when played on catnip I think...) 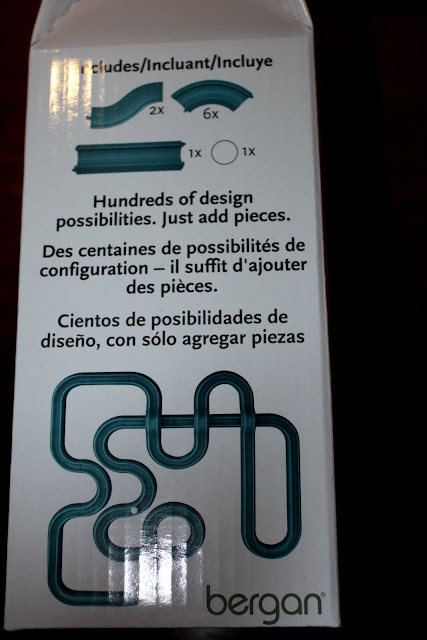 We might have to move our furniture out though.
With HUNDREDS of design possibilities and a bottomless check book, a turbo track could be installed that would allow epic turbo ball games to be played. 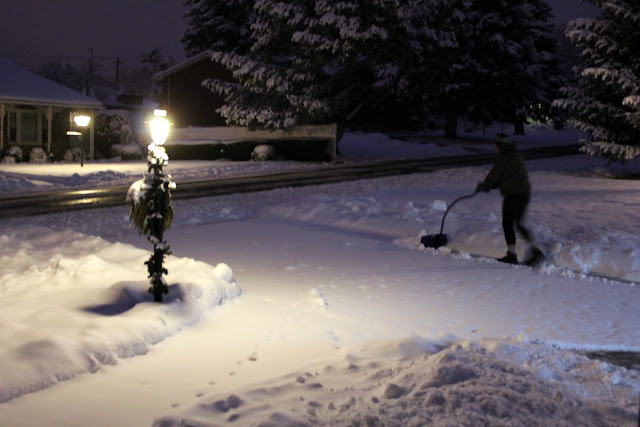 Bernie has his own kind of non-turbo track game that he is playing a lot.
That's him out there before dawn today.

Yeah, we did get a lot of snow this last dump. 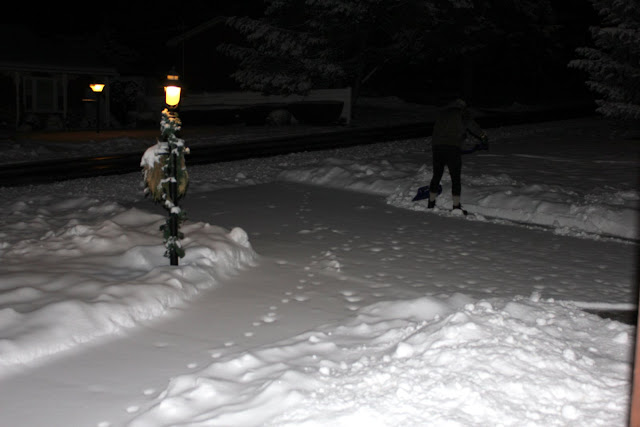 If you look closely at the picture you will notice that there are a lot of cat tracks leading up our walkway.
Guess the word is out, and our cats are already selling tickets to the neighborhood cats during the night.
Wonder when the big game will be played.
I'll keep you posted.
My  money's on Bitsy to win fastest ball around the track, with Tate coming in second!
Posted by Thoughts on Life and Millinery. at 7:34 AM

Jill...I'm laughing! I guess I don't need a cat...'cuz I am finding this January anything but boring.

Too funny! Thank you for the review. Fioré will be deprived. I can't have all that racket during my naps. This is the third post I've read about January boredom. One was my own! I've decided that it's catching.

Thankfully we have lots of added events to make our January a little less boring. Dear and I are headed to San Diego tomorrow for just a couple days so that and a trip to Harrison Hot Springs on Monday is going to help January end nicely. Andrew and Katie made it to and out of your state just fine and are now being really bored by the roads in Northern Texas! I don't know if I could sit on the floor playing with the cats without getting a cramp somewhere!

It's January, and something like the Turbo Track is just waaaay to energetic for me. First the snow, then the wind and now the floods - I'm ready for a nap!...a cat nap?

I suggested to T that he buy this for his barn cats...but he thinks they have enough to do in the barn and he doesn't want them distracted. I think it would be funny.

I'd love to see that track grow...

OH I do hope you get out of your funk soon. You need a grandchild....:) Next January...you will be watching a little one crawl and maybe walk around your coffee table...and compete with the cats for your attention.

The things people come up with. No boring days here...it's been the best January ever!