Two Sundays ago, enough snow had fallen outside that I was able to build a five foot tall snow woman, just for fun.
A blizzard was forecasted for the following Tuesday, when we were to fly out to San Diego for family holiday time.

The  last thing I did before we headed to the airport was to take the hat and scarf off Miss Snow. 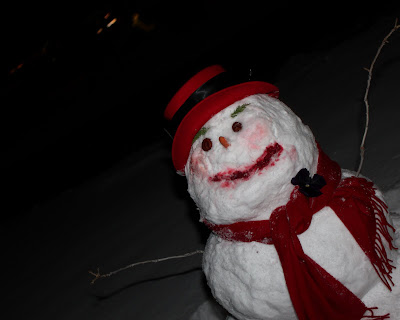 We flew out ahead of the storm, which five hours later closed down the airport, stopping all holiday travelers from leaving SLC.
Whew! 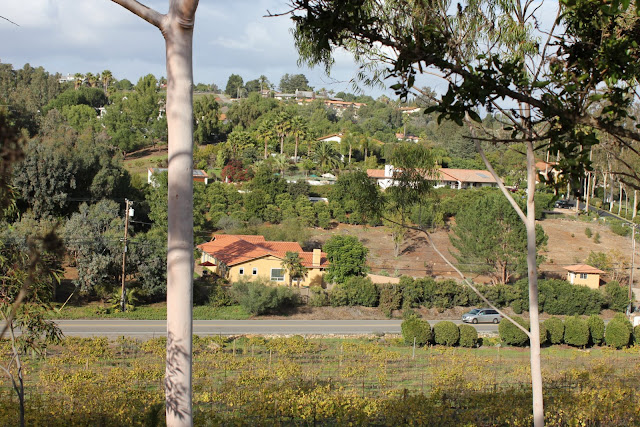 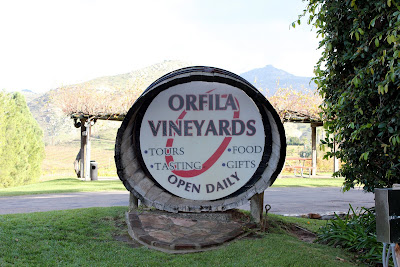 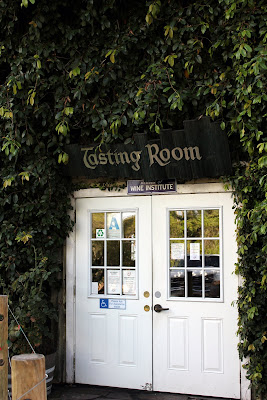 We had arrived in San Diego after a brief layover in Phoenix, just long enough to enjoy a stunning sunset.  Laura was waiting for us at her condo and we enjoyed just getting settled in that day.

The next day, Wednesday, Bernie and I went out to check out the Indian market area (love seeing all the Indian foods and fashions!) then we drove a short way out to a winery. 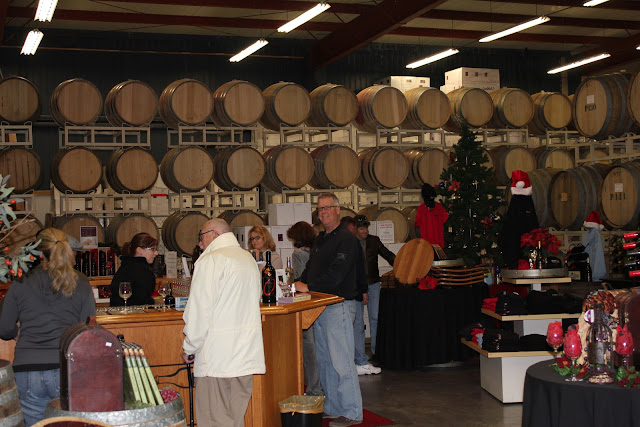 We found a few vintages that we liked...and bought a few bottles...then had to figure out how to get them back to SLC, since mailing any alcohol to Utah is prohibited.
Hmmm.
Where there is a will, there is a way...smile. 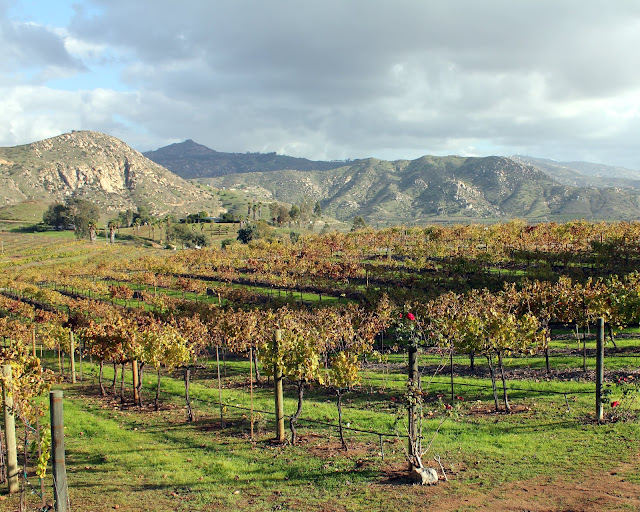 The view of the vineyard in San Diego's autumn.  The grapes had just been harvested a few days before.
The winery is quite near the San Diego Wild Animal Park, just in case you visit the area and want to swing by. 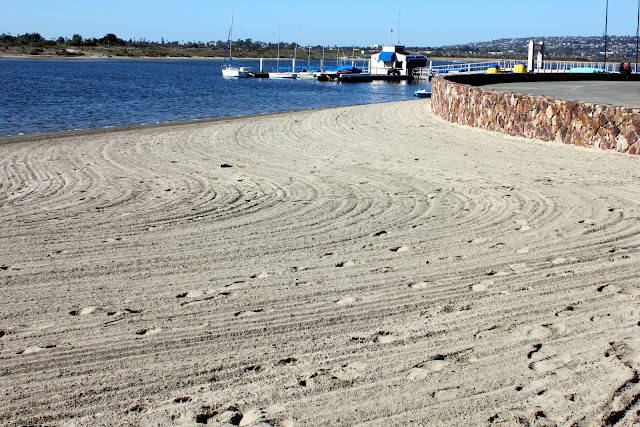 Slowly I am beginning to enjoy palm trees as a botanical form, especially when they are "blooming" and setting seed.  There actually were golden yellow palm dates to be seen on the ground in some places. 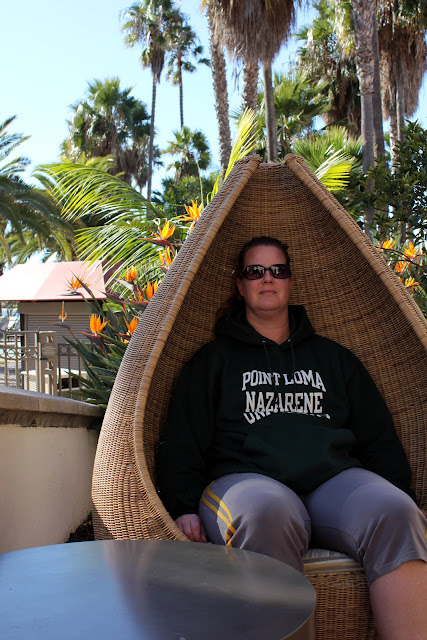 We side tracked off the bay's shoreline to walk through the Hilton Hotel.
Laura tried out a pool side chair; what a great design;  it would ward off both sunburns and overly chilling waterfront breezes. 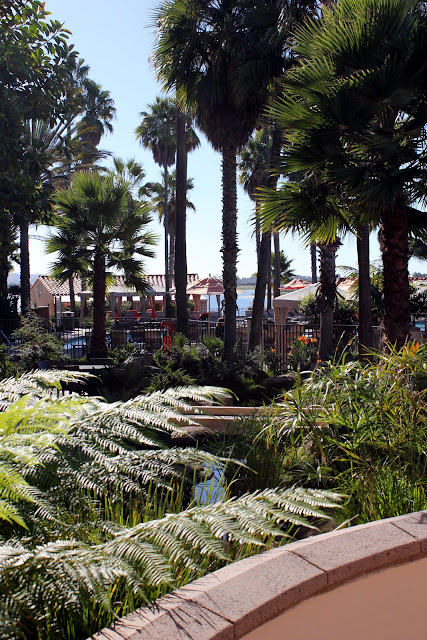 Scenes like this one may explain why I found the long flight to Hawaii have little allure.
The one time I went, I kept feeling like I was still in San Diego! 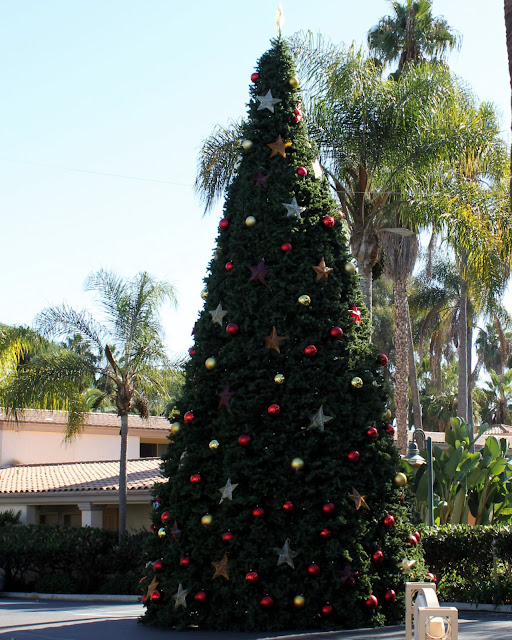 More confusion: The turkey was not yet cooked, but apparently Christmas had arrived.
Christmas in Sunny Southern California: never quite a Wintry Wonderland event. 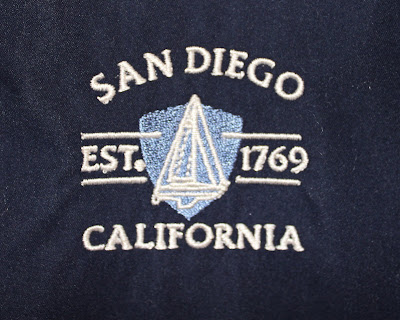 The embroidery on a sweatshirt in the hotel gift shop explains why us San Diego natives often feel out of sync with the east coast.
While the folks in the East Coast colonies where busy rebelling against British taxation, the folks on the West Coast were busy planting vineyards and establishing sunny missions under Spanish rule.
It is hard to wrap one's brain around the idea that while Valley Forge was being endured for "our" freedom, other folks were enjoying sunny day amidst flowers and humming birds.
No wonder the Friars never considered pushing east for more land! 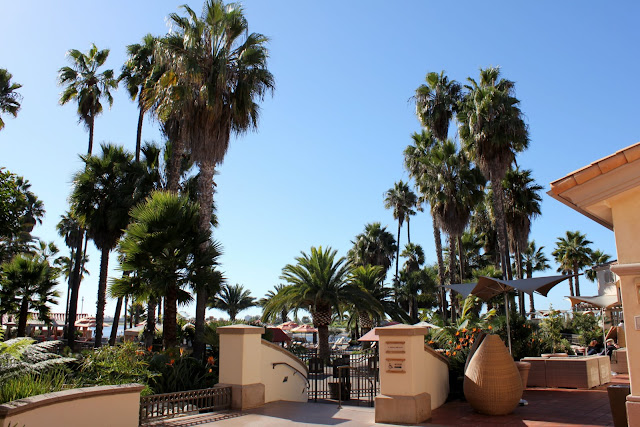 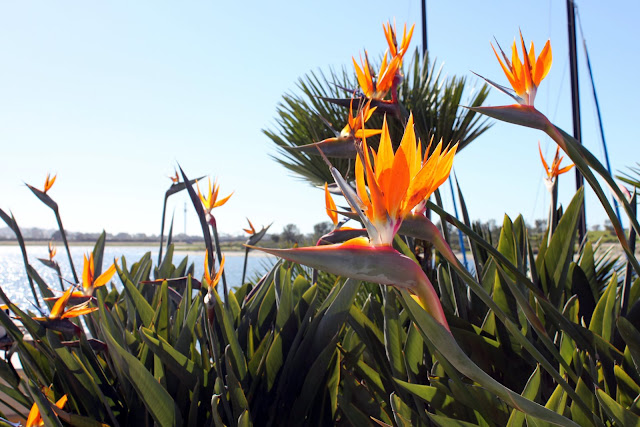 Both times the Bird of Paradise bloomed in the slightly chilled air. 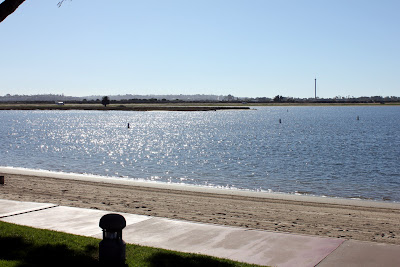 I remember this view from the first time we stayed: it was the week before Christmas and that pole in the distance was the center of light strings that formed a Christmas tree at night. 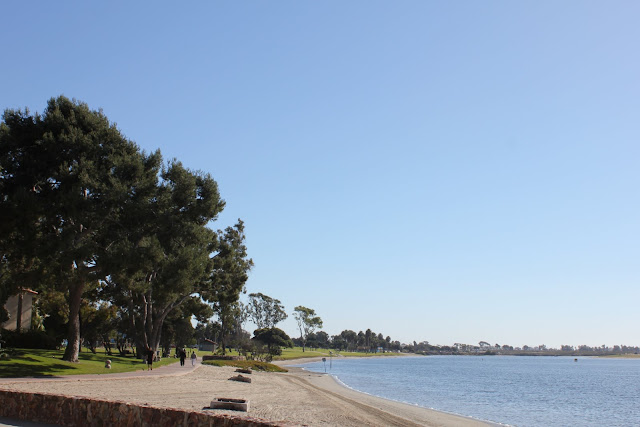 That first visit we didn't have a chance to take a leisurely walk along the waterfront. 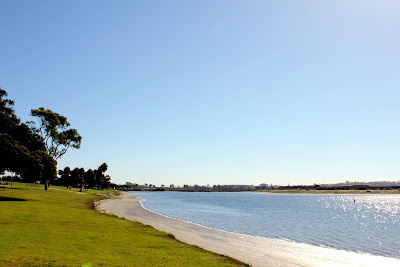 We arrived late, and left early that time. 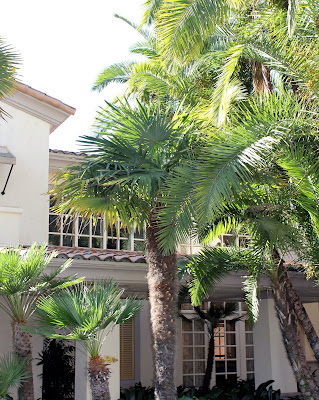 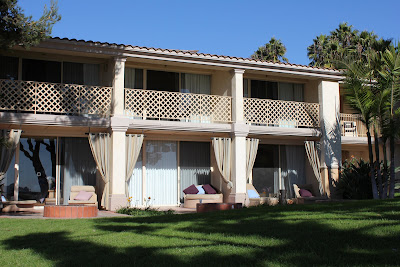 That first visit was on our wedding night, and it marked the beginning of our honeymoon.
We spent our first two honeymoon nights in one of these bay front rooms.
Bernie graduated from Bible college the day after our wedding; there was a lot of events associated with that ceremony so we didn't get to explore the hotel much at all.
A few years later for an anniversary we booked a weekend there again, and STILL didn't get enjoy the ground much.   Some day we really need to go there when lollying around the pool would not require a jacket and long pants to stay warm. 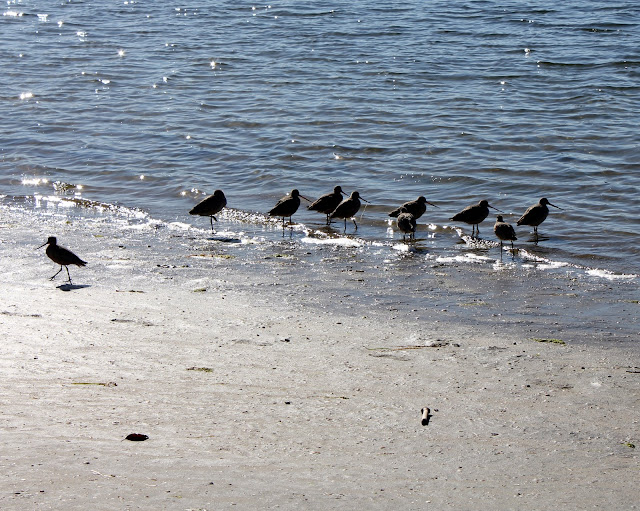 The beach was uncrowded this visit, save the resident shore birds.
Wonder where that one non conforming bird was heading?

Now this is the really curious part of our little walk down memory lane:
Remember we are here on Thanksgiving day. 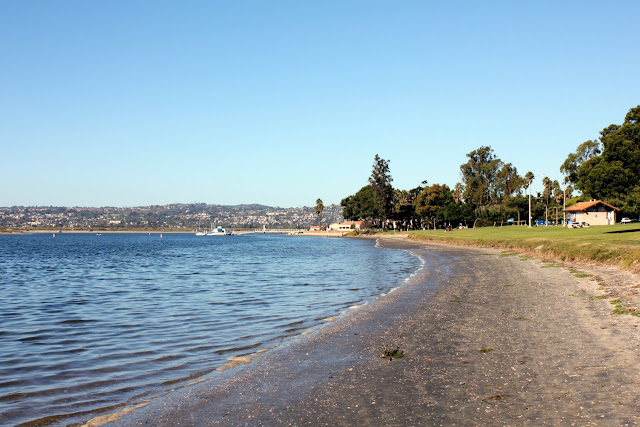 The park is basically empty.
Except for people in Middle Eastern garb! 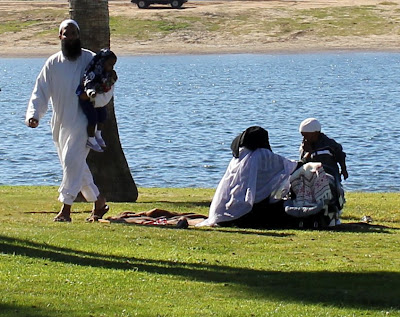 The air was filled with the scent of Middle Eastern foods being cooked and enjoyed by families seated on blankets or inside of tents.
As we sauntered around the park, taking pictures of scenes and watching hawks dive through the trees, more and more such garbed people arrived. The men played soccer, the women tended their children.

I took one picture and was challenged about doing so by a young Middle Eastern man standing nearby.

I told him I was photographing the scenery and moved on. 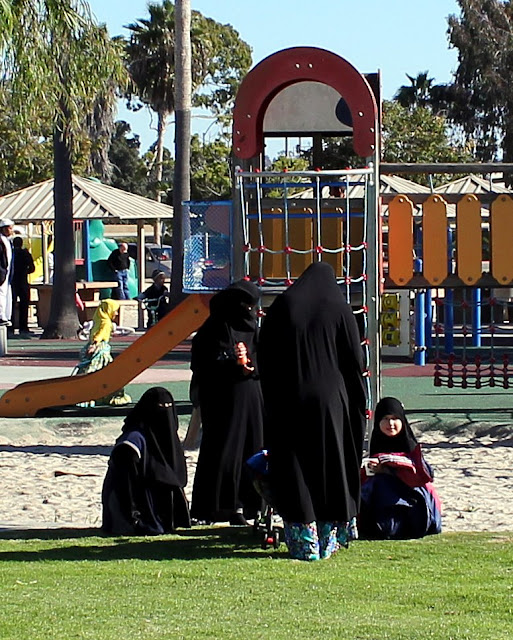 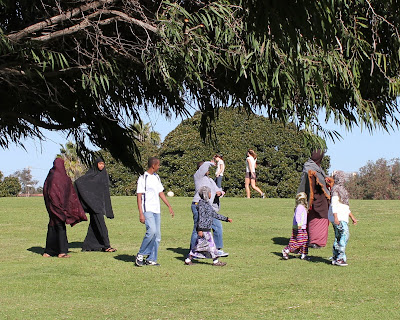 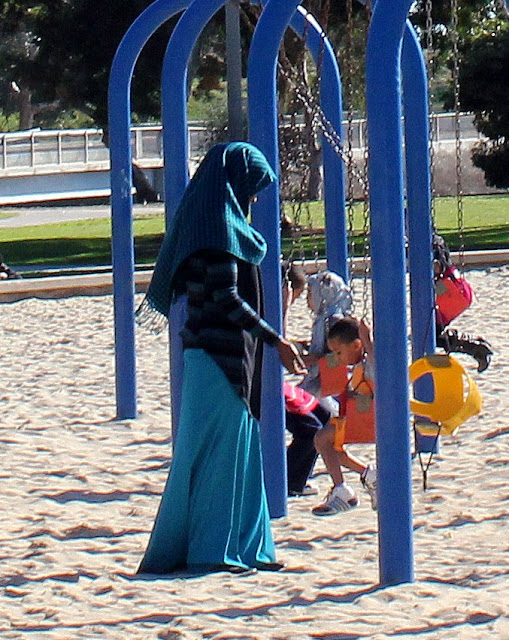 This graceful young mother playing with her children was a sweet reminder that there are such domestic urges in all cultures. 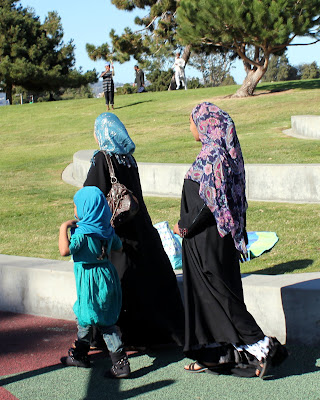 Little girls had head coverings, and older "girls" had head coverings that sparkled in the sunlight.
(Some women wore full face covering, while others did not. Interesting. How do they feel about each other? Yet as in the picture of the women by the play ground, they seem to mix together just fine.)
I had to think this was a special gathering for everyone, that is was their own kind of Thanksgiving played out in their own cultural style.
I hope I was right.
I wished I didn't find such gatherings to be troubling.
I really wished I didn't.
(Post note: The San Diego Mosque was "home" to a few of the 9/11 bombers, and more and more Middle Easterners have moved to San Diego since that tragic event.   One of the terrorists actually lived near to the Middle School that my children had attended. I have a difficult time understanding how these non-English speaking people can afford to live in one of the most expensive cities in America, where, honestly, we could barely afford to live ourselves.  Why are they coming to America?  I think my concerns are not without both historic and economic merit.)
Posted by Thoughts on Life and Millinery. at 11:33 AM

Looks like you are having fun. And I do understand your trepidation with the Muslims moving to San Diego...

A very interesting post, Jill. Lots to see and think about.

I think San Diego has perfect weather. Not too hot; not too cold. Nice!

Thanksgiving and Christmas in a sunny and warm location never feels quite right, does it?

I think any large gathering of people who are very different from us puts us in a bit of discomfort. I'd feel a bit apprehensive, too, and that confrontation about your photographing "the scenery" would make me nervous.

(I'm curious...how did your purchases get home?)

I came home feeling completely behind in my Christmas decorating with everything all decked out in Peurto Rico.
I am realizing now. . it is not December yet. .I suppose they have not a current calendar.
I wanted to take a picture while walking the streets of old san juan and was told. .very adamantly that I was not allowed. Since they were quite close. .I obeyed.

We loved our time in San Diego two years ago...a wonderful place indeed! I don't know if I would get that Christmassy feeling there though.

The bird of paradise shot is simply wonderful. I've never been to San Diego, probably shouldn't go since I've always wanted to go to Hawaii. I'd hate to have that ruined by San Diego. ;D (I understand your concern and share it.)