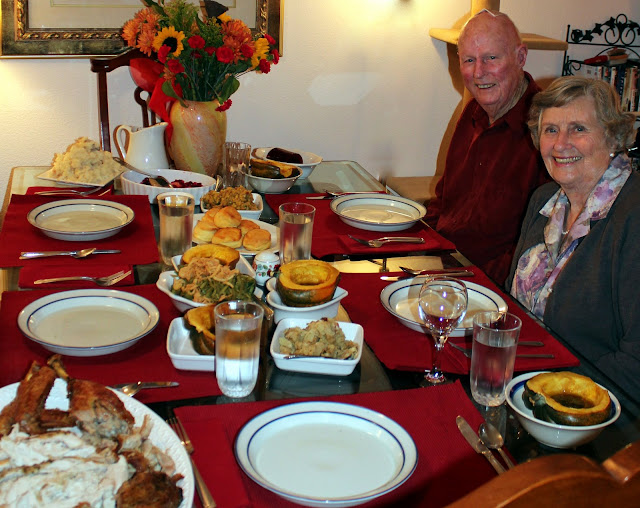 Happiness is having family together at Thanksgiving and a daughter who is talented enough to take over all the hosting and cooking duties! 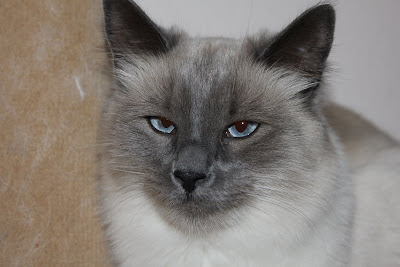 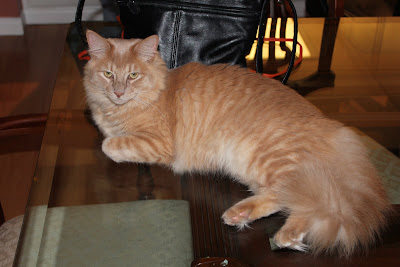 In my family, each household includes cats that are also considered family.
Was it only a year ago that Laura's cats were just tiny babies?
Hensley is now a fully fluffed out boy cat, while blue eyed Cessa is a sleek Siamese lady cat. 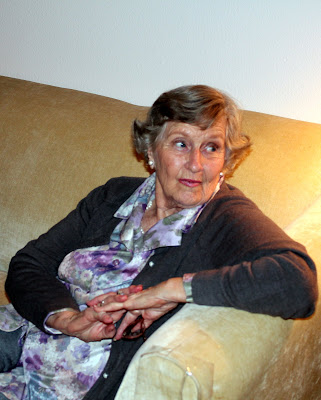 We visited while Laura put the final touches on the dinner. 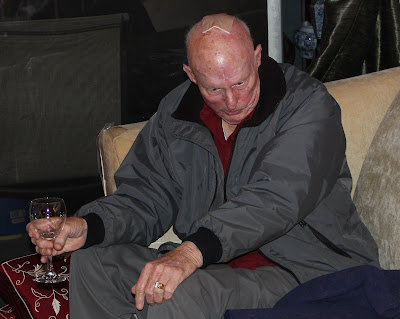 My dad had had yet more skin cancer surgery a few days earlier.  The huge band aid covered just part of the surgery; there was also a large skin graft taken from under his collar bone to fill in the scalp area that was removed.  He was still hurting a bit, but at age 87, he is thankful that the skin cancers are treatable and non-life threatening. 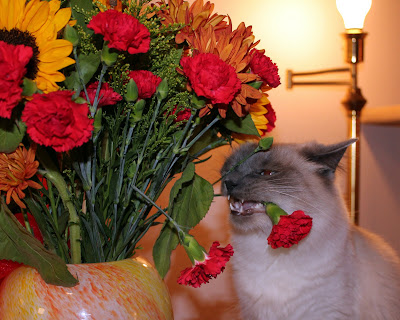 Cessa had an opinion about the flower arrangement, 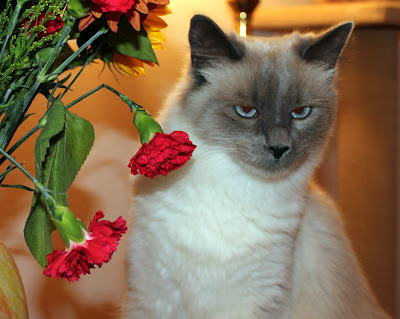 There. That's much better don't you think? 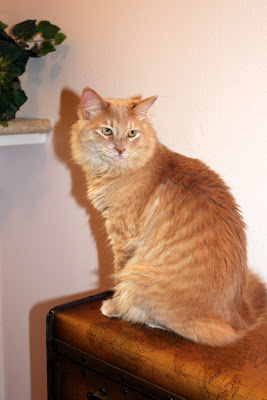 (Hensley: Not really, but whatever floats your boat Cess.) 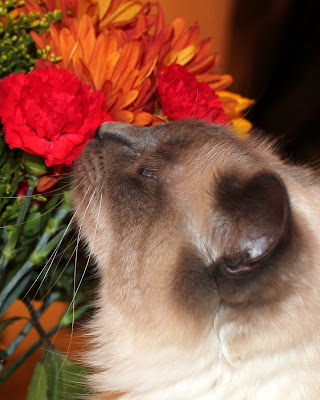 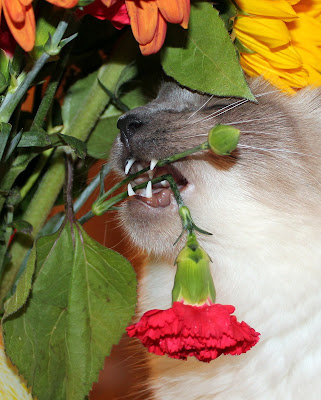 Just a few more slight changes and the arrangement will be perfect. Yes. Better now, and even better still for having me in the picture. 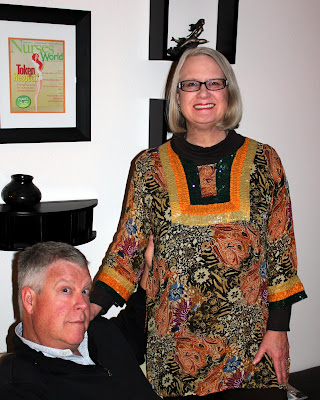 A picture of the two of us for Laura.... 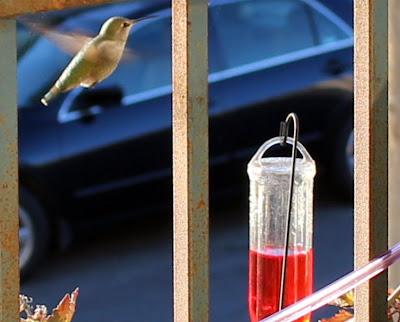 In case you were wondering if the humming birds made it safely south: yes they did, and they regularly drop by Laura's balcony for a spot of nectar throughout the day.
The cats hunker down and waggle their hindquarters in preparation to pounce, yet always seem to have their timing off; they pounce just as the tiny birds turn to fly away. 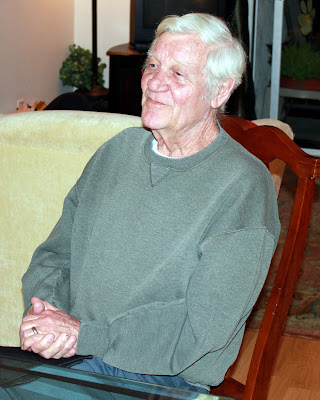 Laura's table seats six, and since her other grandfather isn't a fan of turkey anyway,two Thanksgiving days were held, back to back.  Turkey on  T-day proper, and chicken for dinner the following day.
Bernie's dad Hal was pleased with the menu. 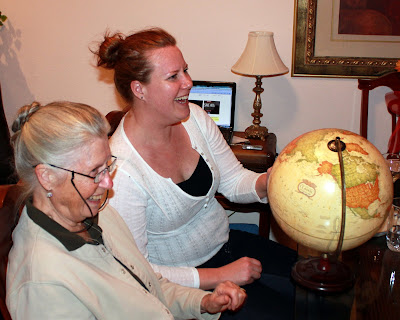 We discussed the possiblility of some travel to Nova Scotia which lead to a conversation about exactly where it was and what was nearby. 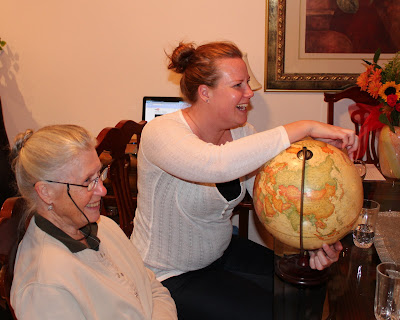 We got several good laughs about our geography skills, and exactly how do you spell Christmas Island anyway.
(The one Hal was talking about was near Hawaii and spelled with a "K", the one Laura looked at was closer to the Indian Ocean and spelled with a "C". ) 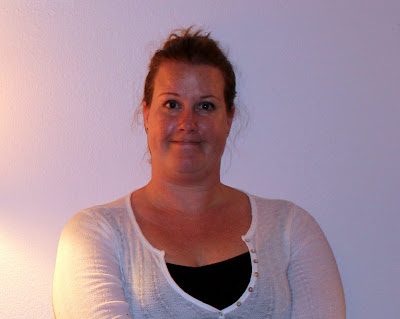 So there she was...after cooking up two dinner parties and having two house guests to boot. 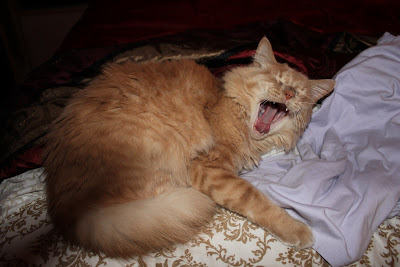 I think all this entertaining wore Hensley out. 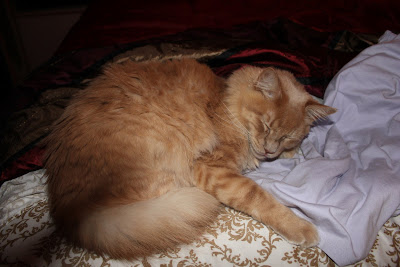 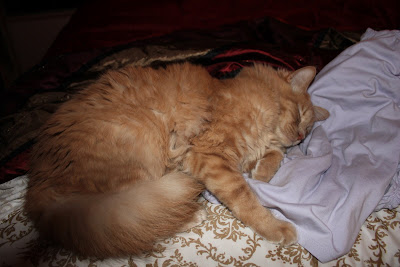 Turned out he really isn't much of a party animal after all!
Posted by Thoughts on Life and Millinery. at 10:06 AM

Ah. .Laura looks like a fantastic cook. How absolutely wonderful that she is willing to host the dinners at her house. The food looked quite delicious and healthy too.
The cat rearranging the floral arrangement gave me a chuckle.

Beautiful family photos. Your dad is quite a sport and I hope that he heals quickly. Not fun to endure those skin grafts at any age, but especially at his. The cats and flowers pics made me laugh! Oh for the day when my darling daughter takes over. I just asked her this past Thanksgiving. She said that when she takes over, it'll be Chinese take-out all the way. Gheesh!

Makes me hungry just looking at it. And I'd like to kiss those adorable cats right on the lips! And I would.

Glad you're having such a lovely time with the family! Your kitty flower arranging made me laugh.

Nova Scotia? Next door to moi, my dear!

Looks delicious...and the cat commentary was a hoot. Looks like you all had some quality family time...that is a real blessing in this busy and disjointed world.

If I had known you were in San Diego...so was I!!! Well, actually, we were in Chula Vista but we had Tday dinner in S. San Diego in sight of the int'l border.

About your previous post--do read Son of Hamas. The author lives in San Diego.

How fun to see some of your family. Hats off to daughter for her taking over the cooking responsibilities! That is a great shot of the cat teeth!! Love the photo of you and hubby! Our dads are about the same age!

Ah, how wonderful of Laura to cook and host two dinners! What a gal! Cessa and Hensley appeared to take it all in stride, too. (Love your kurti, Jill!)

Good for your daughter...it all looked fabulous!

My dad had skin cancer surgery on his nose a month or two ago...he's 88.

Go for it...the trip to Nova Scotia, that is. It's a fabulous place to visit!

I'm laughing at the photos of the cats baring their teeth while munching on flowers. Hee hee.

What a wonderful Thanksgiving! Your Mom is so attractive and it was good to see your dad smiling. Their cats are so cute! Cats are such good company...mine is always by my side.