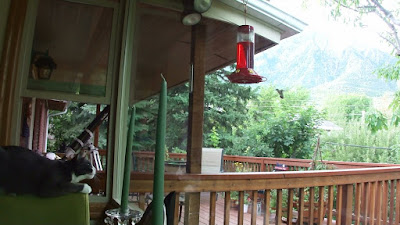 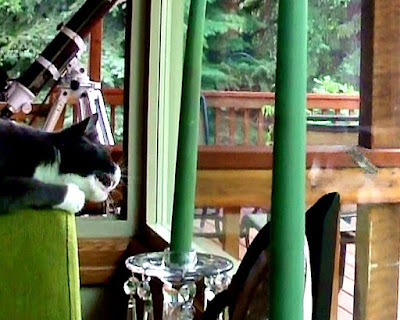 See Hart chattering at the hummer who is now about 20 inches from his face? (the little blur between the green candle and the porch post is the hummer.) 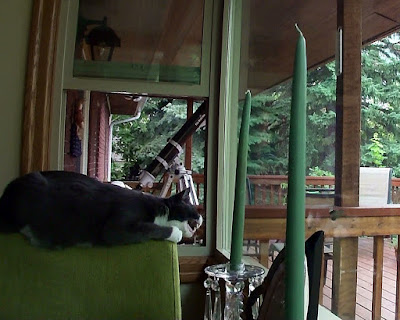 Oh yes, Hart had a lot to say about THAT cheeky little bird.

But that was nothing compared to what I was saying later.
I actually filmed this encounter. I was sitting at the kitchen table, drinking my morning coffee and fooling around taking bird pictures when I noticed Hart was bird watching. His head, ears, eyes and tail reacted to every bird that flew to our bird feeder.
Just for fun, I switched over to the camera's video mode.
Clicked "record" just as it happened that Hummer made his appearance.

I caught it all, all 14 seconds of the encounter, including the sounds of Hart's chatter.
Sweet!
Naturally I wanted to share the video.
Umm...not so sweet.
It turns out that since my camera videos in HD (which, by the way, does result in achingly beautiful film) I will not be able to share my HD videos.
Of course I didn't really, really know that fact until after I spent FIVE hours yesterday trying to do the film upload.
First I did web research on help sites. They offered a variety of uploads to make HD loadable into Picasa.
Next I made sure I had loaded the software that came with my new HD camera onto my computer. Oh how happy I was to see a Picasa Web album upload button for video!
This was at 5:30 pm. I promised myself I would stop working on this upload project at 6 pm.
Then I promised myself I would stop at 7 pm...8pm....9pm.
I went upstairs and got ready for bed
Went to bed.
Got up again at 10pm.
Worked until 10:30 pm.
Got up at 7 am...and finally found the PMB (the program for media management that comes with a Sony camera) help with sharing HDV.
Small print: It can't be done.
Oh.
(I proceeded to chatter, chatter, chatter like Hart was doing in the photos above, which by the way are frames saved from the AMAZING video. I want to share that at no time did I swear in a human language.)
Supposedly I can get my camera video setting changed so videos will no longer be in HD, and therefore will be shareable.
Decisions, decisions.
Do I change the setting so I can share less than HD caliber videos, or do I keep shooting in HD, trusting that is will only be a matter of time before this detail is resolved in Techi-land?
(And yes, I did download TWO programs that supposedly would "fix" the M2t file setting on my videos; nothing is being fixed that I can see.)

I did upload the video to Youtube; it is so pixilated that you can hardly tell there is a humming bird in the film.
I wanted to upload it to Facebook, but that didn't work either.

Over the years I have observed that when confronted with technical issues, women say "I must be doing something wrong" while men say "There is something wrong with this program."

Right now, I'm going to be "mannish" about this and say it is the programs fault.
If anyone out there can clue me to a different conclusion, I will be happy to hear all about it.
Until a fix can be found, either be satisfied with seeing the Youtube version or drop by and I'll be happy to play all 14 seconds of the clip for you on my HD television set.
Or on my camera playback.

Or you can simply use your imagination, and imagine how scene must have looked.

Five hours of work over 14 seconds for nothing.
Sigh.

Posted by Thoughts on Life and Millinery. at 11:19 AM

I think I'll just use my imagination! Having seen cats chattering like that, I can imagine pretty well what it looked like. Isn't it funny that they do that? I mean, if they were in the wild, they'd scare the birds away with their chattering before they could catch them!

These kinds of things happen to me all the time. I used to describe myself as a fast learner, but then had to switch my thinking. Now I may be able to switch back reading about a man's approach to a problem. I'm off to see the You Tube version, but I know that your film is beautiful.

I've had no luck loading videos onto blogger...now I must see if they are in HD.

I tried to view the video on YouTube and it said the video is private. Did you take it down? That chattering sound that cats make fascinates me, but I have never, ever heard Spooky make it.

I'll be right over to view it on your screen, especially since the coffee is hot:) I really do understand this post and your diligence. That is how I was with my crazy, stubborn little white Photobucket box on the left side of my blog. It is the thought that counts my friend...that you would spend so much time just to share it all with us. How kind of you.